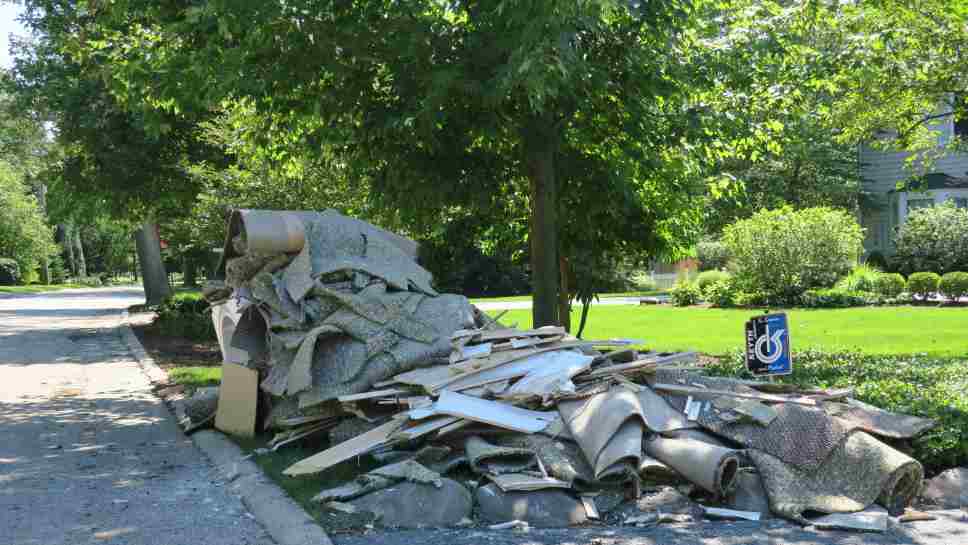 Carpeting and other damaged debris placed at the curb after a rainstorm caused flooding in Winnetka.

The North Shore has experienced significant rainstorms causing homes and streets to flood in recent years. In particular, severe flooding has occurred in western portions of both Winnetka and Wilmette, prompting village officials to seek solutions that will relieve impacted homeowners at a cost acceptable to all residents.

But costs will likely be a sticking point for both villages. Winnetka is considering a four-phase, $57.7 million plan that includes conveying stormwater to various storage sites throughout the village and forest preserve.

On October 20, the Wilmette village board will convene to discuss a $77 million project that aims to reduce flooding for residents living west of Ridge Road. But the proposal developed by Christopher Burke Engineering won’t solve all flooding — in low-lying areas, occasional flooding will still occur — just not as badly or last as long.

Wilmette’s sewer system west of Ridge Road was constructed in the 1950s and does not have the capacity to handle rainstorms greater than a two-year rainstorm. The plan proposes building a new sewer system from Ridge Road to the village’s western limits that would keep flood levels below street level for up to a 10-year storm event, according to Christopher Burke’s presentation.

The proposed plan includes installing 42,000 feet of new trunk and lateral sewers that would collect and convey excess stormwater to a pump station on Lake Avenue, which discharges into the north branch of the Chicago River. The entire project would take about five years to construct if approved, and is projected to cause significant traffic delays, utility conflicts and disruption to the golf course, according to Burke’s presentation.

The project will also come at a considerable cost. The village has never spent this amount on one sewer project. In fact, the cost of this proposal would be equal to all the money the village has spent on sewer projects benefiting the whole village since 1990, according to the village website. The project would be funded through sewer user fees on residents’ water bills. The proposed project would increase the sewer rate from $4.24 to $8.92, resulting in a $625 average annual increase.

Christopher Burke estimates the number of west-side homes impacted by a 10-year storm event is 120. All 120 homes would be protected from flooding under this proposal.

The proposed stormwater project comes on the heels of the completion of the West Park sanitary storage project. That project cost $18.5 million with the goal of reducing the severity and frequency of sewer backups for over 1,300 homes in west Wilmette. That project was put to the test this summer when a large rain storm occurred on July 23-24. According to Christopher Burke’s presentation, sewer back-ups were down 76% compared to 2008.

Whether or not Wilmette or Winnetka officials will approve these large-scale projects remains to be seen. The Winnetka Village Council rejected a previous proposal for a stormwater tunnel in September 2015, when cost estimates for that project rose to $81.3 million.

The Wilmette village board will hold a public meeting to review the proposed stormwater plan on October 20 at 7 p.m. at the village hall. To see Christopher Burke’s presentation go to www.wilmette.com.