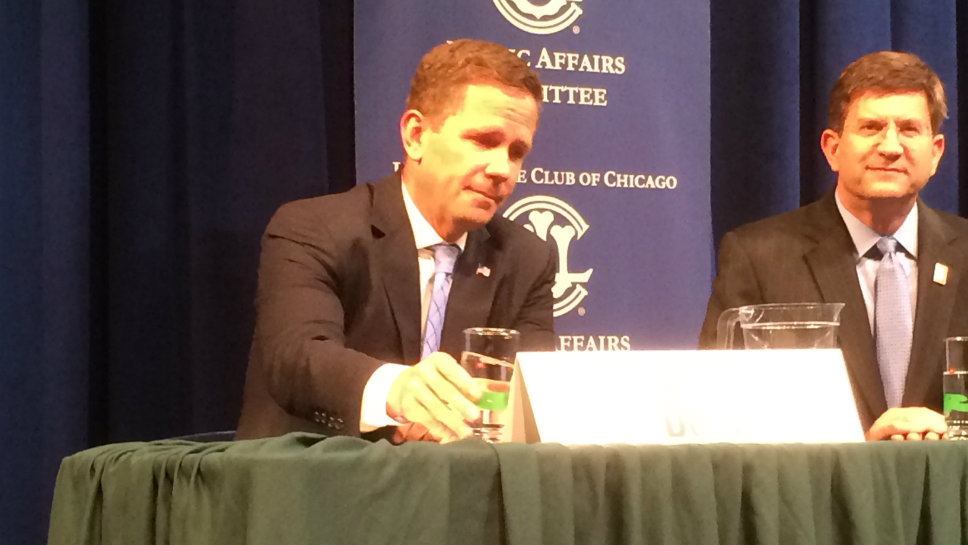 Rep. Robert Dold (R-Kenilworth) and former Rep. Brad Schneider (D-Deerfield) were quick to criticize each other’s positions as they tried to show voters how they differ while agreeing on several issues.

Schneider and Dold are competing against each other for the third time since 2012, seeking the right to represent the 10th Congressional District in Congress. The election is on November 8.

Both candidates said they favored legislation geared to reduce gun violence, including a law not allowing people barred from boarding an airliner from buying firearms. Dold said he has introduced legislation with that provision. It has not received a vote in the House of Representatives.

Schneider criticized Dold for not signing a Democratic petition circulating in the House to force a vote.

Dold, who touted his independence and bipartisanship while serving in Congress throughout the forum, did not directly answer the question but responded with a rebuke of Schneider’s record while serving.

“I don’t take my cues from the least effective member of Congress,” Dold said in a DailyNorthShore.com interview after the forum.

Schneider responded claiming that Dold’s bipartisanship is one of convenience rather than principle.

“He takes his instructions from the Republican leadership, which he follows in lockstep on issues that count,” Schneider said after the forum in a DNS.com interview. “It’s easy to pay lip service but we need action.”

The most objective position on both their records on gun control comes from the National Rifle Association, according to Dold.

“The NRA gives me the same rating as him,” Dold said during the forum. Schneider has said he received an F rating, the lowest one the NRA hands out. A Dold campaign spokesperson said after the forum Dold got an F as well.

Both Dold and Schneider said they opposed the deal signed last year to reduce the chances of Iran obtaining a nuclear weapon but Dold tried to accuse his opponent of reversing positions to stave off a primary challenge earlier this year.

“That deal will jeopardize the security of the United States and our one true ally Israel,” Dold said. “My opponent said he was against it but flipped flopped and now he supports it.”

Schneider said since the Iran deal is now in place it is important to enforce it making sure Iran adheres to its terms. He said his position remains firm.

“Before I went to Congress I lobbied for two decades to prevent Iran from getting a nuclear weapon,” Schneider said. “We have to make sure Iran does not get a nuclear weapon for the next 15 years, the 15 years after that or ever.”


Both candidates offered similar ideas to preserve Social Security though Schneider was more specific. Dold said he was willing to discuss raising both the retirement age and the income ceiling for social security withholding. Schneider said he favors keeping the retirement age in place and raising the cap from $118,000 to $1 million a year.

When asked their proudest moment while serving in Congress, Schneider said there were two—his work on immigration reform and gun control. Dold touted his effort to increase availability of Naloxone, an antidote to a heroin overdose. He shepherded the bill through Congress and it was signed into law by President Barack Obama on July 22.

Dold first won the seat with a narrow victory over Dan Seals in 2010 before Schneider beat him by a razor-thin margin in 2012. Dold retook the job from Schneider in 2014.

Early voting starts on October 24 at various sites in Lake and Cook County. The 10th District includes the far north and northwest suburbs including all of Glencoe, Highland Park, Highwood, Lake Forest, Lake Bluff and Deerfield as well as parts of Glenview and Northbrook.