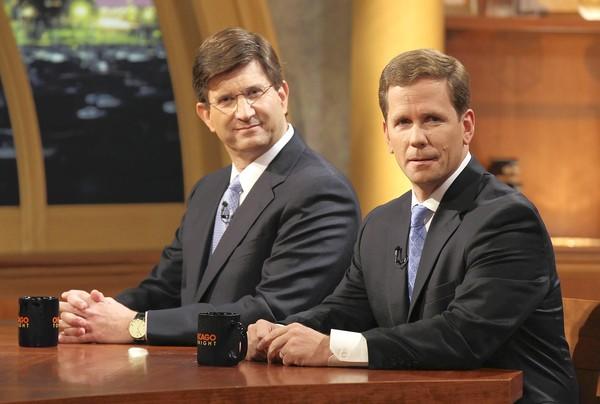 If you want to know who is leading the race between former Rep. Brad Schneider (D-Deerfield) and Rep. Robert Dold (R-Kenilworth) for the 10th Congressional District in the November 8 general election, just ask their respective pollsters.

They will tell you it is their candidate.

A poll showing Dold with a seven point lead was released on October 13 by the National Republican Campaign Committee. Two weeks before that, the Schneider campaign distributed results of its poll showing the former Congressman five points ahead.

The NRCC poll results were based on a sample of live interviews, meaning they were conducted on the phone by live callers rather than automated recordings. Of 400 registered voters questioned between October 8 and 11,  50 percent favored Dold and 43 percent Schneider. It was prepared by North Star Opinion Research for the NRCC, the campaign arm of the Republicans in the House of Representatives.

Schneider’s poll, prepared by Normington Petts and also conducted by live callers rather than automated recordings, shows him favored by 46 percent of likely voters to Dold’s 41. “Likely” means they told the person conducting the poll that they were likely to vote. The survey was taken of 399 likely voters between September 28 and 29.

Both Polls Use Cell Phones and Land Lines

Along with the projected margins of victory, there were other differences between the polls. Schneider questioned likely voters while the NRCC talked to all registered voters. The NRCC spoke to 36 percent of its sample size on cell phones and 64 percent on land lines. The Schneider campaign divided its respondents between 49 percent cellular and 51 percent land lines.

Both surveys looked at Dold’s favorability rating among respondents but neither reported how voters felt about Schneider. The NRCC poll showed 45 percent of the people have a favorable opinion of Dold while 32 percent think unfavorably. Schneider’s survey gives Dold a 34 percent favorable rating and 29 percent unfavorable.

While both polls took a look at how 10th District voters viewed both Democratic presidential candidate Hillary Clinton and Republican nominee Donald J. Trump, the NRCC survey reported a deeper dive into the classification of voters for their candidates.

Neither candidate supports Trump. Schneider firmly backed Clinton during her primary campaign against Sen. Bernie Sanders (I-Vt.). Dold was the second Republican House member to refuse to support Trump. He made it public on December 22, according to a September 4 New York Times story. Dold said he will write in a candidate, as reported in a June 7 DailyNorthShore.com story.

Dueling polls are not new in this contest. Schneider’s campaign released a survey in June showing him with a 47-43 lead, and results of a questionnaire by the Democratic Congressional Campaign Committee released August 8 showed him ahead 46 percent to 40. Though Dold has not publically shared internal polling information, campaign spokesperson Danielle Hagen said in an email to DNS their information showed the Congressman consistently ahead.

For the complete memo of the most recent Schneider poll click here. Click here for the memo from the NRCC survey.

All indications are the race will be close. Dold first won the seat with a narrow victory over Dan Seals in 2010 before Schneider beat him by a razor thin margin in 2012. Dold retook the job from Schneider in 2014.

Both Dold and Schneider said in news releases earlier this month they raised more than $1 million for the quarter ending September 30. Dold has more than $2.2 million in the bank, according to his release. The Schneider campaign did not report cash on hand.

Both Schneider and Dold must file their full campaign finance report with the Federal Election Commission by October 15.

Early voting starts October 24 at various sites in Lake and Cook Counties. The 10th District includes the far north and northwest suburbs including all of Glencoe, Highland Park, Highwood, Lake Forest, Lake Bluff and Deerfield as well as parts of Glenview and Northbrook.