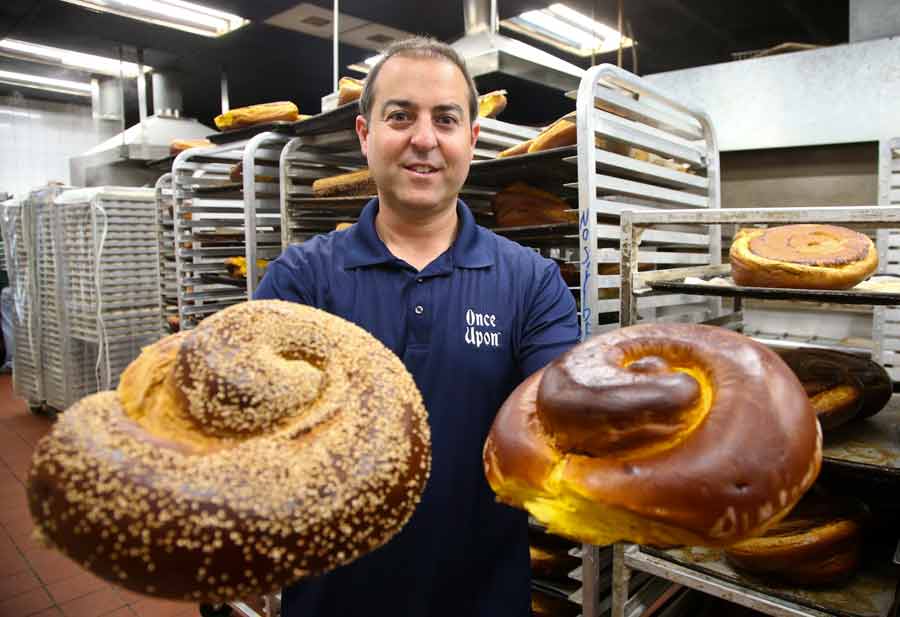 Once Upon a Bagel co-owner Steve Geffen with warm Challa. PHOTOGRAPHY BY JOEL LERNER/JWC MEDIA

HIGHLAND PARK – After atoning for their sins on Yom Kippur Oct. 11 and 12, many ravenous worshipers will be treated to a choreographed assembly line at Once Upon A Bagel, whose employees quickly load boxed orders for the break-fast dinner into patrons’ cars.

“When we first started it was maybe 50 to 100 orders for the Yom Kippur break-the-fast holiday, now we’re at the highest we’ve ever been at about 1,000 orders,” said Steve Geffen, co-owner. “We started with one small refrigerated truck in the back and now between all of our locations we have five refrigerated trucks. We’ll do close to 700 orders just out of the Highland Park location.”

Geffen explained that the process involves closing the doors the day before, setting up an assembly line with tables going all around and dividing the duties into different tasks: one person is in charge of doing the tray set up, another person cuts the cucumbers and tomatoes, and the third person lays cheese on the tray. Next, the orders are labeled and put into boxes.

The Yom Kippur break-the-fast is the busiest holiday for Once Upon A Bagel (OUAB). “For the holiday we go through about 7,000 pounds of lox versus 1,500 pounds a week normally,” said Geffen.

Geffen said between the two days of orders, the staff will be up for about 48 hours, so it’s basically “one 48-hour day.” Despite the long hours, he believes it’s a good system, and now it’s about a 30-second process to pick up each order after the OUAB team matches up the names and phone numbers.

Boxed orders are carefully arranged, so that bagels stay dry in their own box, separate from salads, lox, cream cheese, cheeses, and sliced vegetables. Holiday trays are also a popular option.

Geffen said the trays are displayed with the salads in the center, with lox, cream cheese, olives, cucumbers, tomatoes, onions, swiss cheese and bagels and bialys. OUAB also has sweet trays, and fruit trays for the break-fast.

OUAB is offering a new option for pastrami lovers: nova pastrami. “We have a company out of Maine that we get our lox from and they have so many creative ways to serve lox,” said Geffen. “The seasoning is basically what you get on pastrami, but now they put it on lox.”

In addition to lox, fresh whitefish is “huge right now, because there’s no more smoked fish. It’s basically been out fished and chubs are coming in so small now, because they’ve been so over-fished. Whitefish is a bigger and moister fish,” said Geffen. 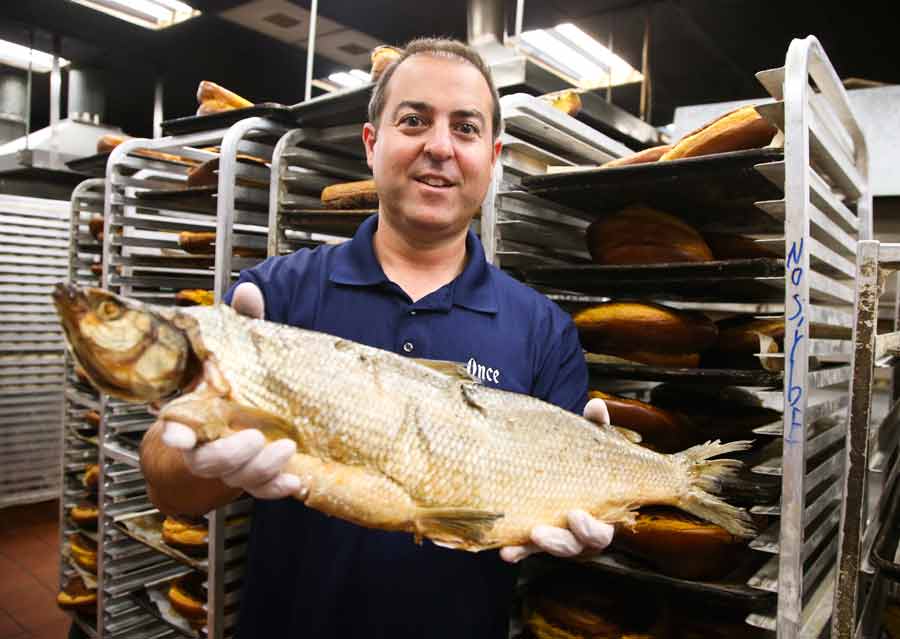 Geffen is appreciative of the loyal staff, which has kept OUAB thriving for almost 30 years.

“My favorite part about this entire place is the guys that work here,” he said. “We have very little turnover. We treat them like family and that’s why this place survives.”

The Geffen family opened OUAB in Highland Park in 1987. Owner Gerry Geffen (Steve Geffen’s dad) was a partner in a chain called Brooklyn Bagel Boys before he decided to open up his own place. The Brooklyn Bagel Boys was in the shopping center where Over The Top is located.

“Dad is still chugging along in his 70s and he just loves it,” said Geffen. “He likes talking to the customers that come in here, because they’re his friends. We’ve been open for almost 30 years and he’s really developed relationships outside the restaurant too.”

Geffen explained that when OUAB first opened, it was half the size with about four tables and it was mostly carryout. A few years later they expanded the dining room by taking some of the vacant space next door.

The Once Upon Family of Restaurants include: Once Upon A Grill, and Once Upon A Deli in Northbrook, OUAB in Winnetka, and Mean Weiner and Lucky Fish in Highwood. Lucky Fish will also be coming to Northbrook soon.

The staff from the stores that will be closed on Yom Kippur will come to work in Highland Park or Northbrook, he said.

Geffen said keeping up with all the bagels is also difficult during Yom Kippur, and throughout the 48 hours the staff is also making dough.

“The bagels have to be frozen after they’re formed before you put them in the boiling water, because if you put them straight into the boiling water they’ll expand, and you’d have a bagel that’s the size of a bread,” he said. “Once they rise to the appropriate size then you have to freeze them and that’s how they keep their shape.”

Yom Kippur orders should be placed no later than three days before the holiday. “But of course if someone comes in and says I’m late, we’re not going to turn anybody down,” said Geffen. “Orders should be placed sooner rather than later, as we have to prepare too, and know how much to order on our end.”