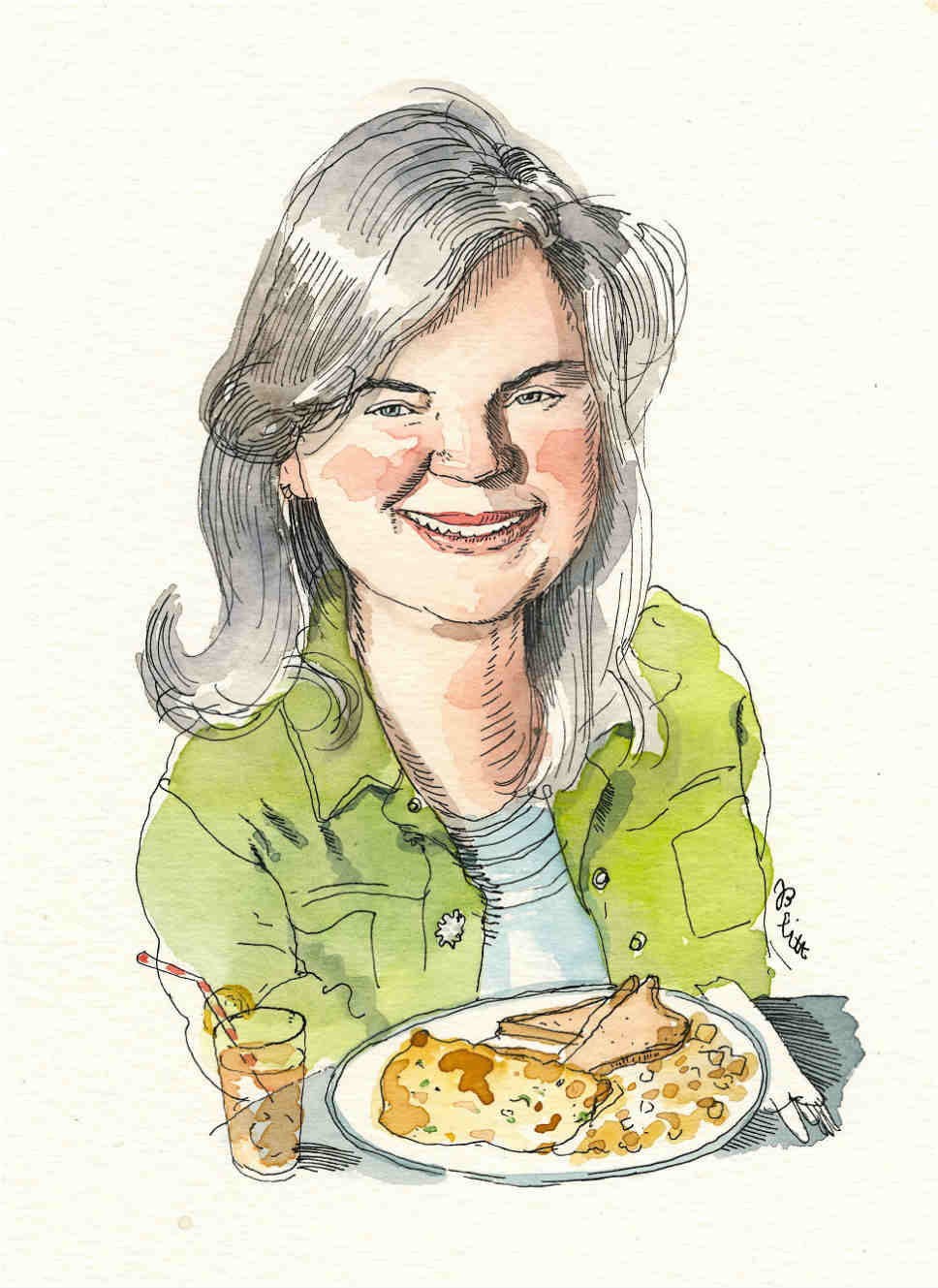 Ever meet a person who appears to smile even when the person isn’t smiling? I did. They are out there. They are must-get-to-know people.

I meet Rebecca Hoffman one morning at Café Boungiorno in Winnetka. Her eyes appear to grin as she orders an omelet, potatoes and whole wheat toast. The waiter takes my order. The waiter nods and walks away from our table. Hoffman faces me and starts to talk. Her voice is rise-and-shine cheery, a giggle always at the tip of her tongue.

It must be a gift, pulling off the smile-without-smiling feat, I surmise after only five minutes of getting to know Hoffman, a 45-year-old Glencoe resident and founder and principal of Good Egg Concepts, her home-based consulting firm serving business and not-for-profit clients.

Hoffman is more than a successful businesswoman. Much more. Get her on the topic of comedy and be prepared to hear her animated thoughts about the late Jacques Tati, the French filmmaker and comic actor, and Jerry Seinfeld and Larry David and Louis C.K. and 90-year-old Mel Brooks, “the greatest living comedian,” she says.

“I follow comedians like a lot of people follow sports figures,” she adds. “Comedy is nourishing. You have to maintain a sense of humor, or you are doomed. Have you ever taken improv classes at Second City?”

“No,” I say to the woman who took improv classes at Second City in her late 30s.

The only child of a cellist/psychotherapist/marathon runner father (Leon) and a gemstone specialist/violinist mother (Barbara) grew up in Chicago and attended Francis W. Parker School in the city. Francis Parker’s commitment to the arts is its hallmark, a perfect environment for a young Rebecca Hoffman.

“I come from a very creative family; my parents are cool people,” she says. “Ideas and art and literature and music were celebrated at home. At work, I get into a creative zone; it’s a soft zone, never firm. There is no straight line to coming up with something in the creative process. What I do for my clients takes iterations and prototyping, thinking big on some days, scaling down on others. I have a network of creative people (designers and printers, tagline specialists and photographers, among others). I do matchmaking for clients, and the challenge is to come up with ways to present things in a fabulous and sparkling way.

“The challenge,” she adds, “is also the reward.”

The business matchmaker, a graduate of the University of Miami in Coral Gables, Florida, met her future husband, Dan Pikelny, at a speed dating event held at a vegetarian restaurant in Chicago. They engaged in conversation for seven minutes, not one second longer. A rule is a rule. On to the next date. On your mark, get set, get to know. The topic of travel had lifted Rebecca and Dan. Travel, to Hoffman, ranks right up there with a good punch line at Zanies. Crucial. Some of her “forever places,” or places where she could live forever: Hawaii, New York City, La Jolla, California.

Rebecca and Dan reconnected. They dated for a year, never having to worry about the blare of a buzzer again.

They got married. Her husband is a vice president of analytics for a major manufacturer.

“A quantitative guy,” Hoffman says. “He does math with pleasure; I have to be dragged away from art museums. He’s the perfect counterpart to me.”

“My sidekicks,” Hoffman says. “Abby, she is driven, so driven. She wakes up some days and decides to create a PowerPoint Presentation.

“The house,” she adds, “it’s my first. I get to deal with trees and lawns for the first time. I love it. I’d been living in apartments all of my life. I consider living in a house an adventure, like mountain climbing.”

Hoffman does not need a Sherpa to guide her through her ideal day, which includes spending at least an hour to learn something new. She read about the history of Glencoe one day. She read the account of a woman who grew up in the Chelsea Hotel in New York on another day. An avid library goer, she likes to check out books, featuring subjects she normally wouldn’t consume, and gobble up the information. Food for thought-provoking conversations.

“Each ideal day I also like to meet people I don’t know and get together with people I know,” she says. “In between those encounters, I like to tend to projects that are percolating, spend time in front of a screen, working digitally. I always enjoy spending time with my kids after they get home from school. Cooking … I discovered cooking late in life. I get to use my hands. I make great salads.

“At night,” she adds, “there’s Jimmy Kimmel. Funny. But there’s nothing like watching a funny movie at night, a vintage comedy like a Marx Brothers movie. Physical humor, subtle humor, wonderful humor … I’m a fan of all kinds of humor.”