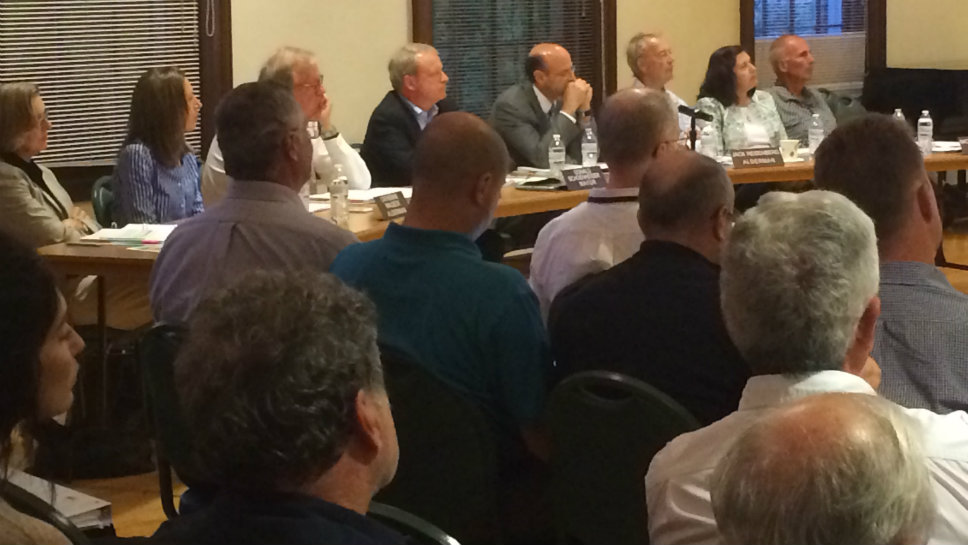 A crowd of more than 60 people attended to the Lake Forest City Council workshop on pension funding.

LAKE FOREST — Mayor Donald Schoenheider made a vow to maintain the city’s level of public safety during a Lake Forest City Council workshop session September 19 at Dickinson Hall, but he said he recognizes his promise does not come without a cost.

“The problem is immense but in no way will we sacrifice public safety,” said Schoenheider. “Public safety is the most important thing we provide our residents and we will never sacrifice our level of service.”

The cost of funding police, fire and municipal worker pensions is increasing at a greater rate than the amount the city can legally raise the property tax levy to cover its share, according to Holleb. It is also funded by employee contributions. The combined increase of the city’s share over the past year is 8.09 percent or $254,976.

Though Lake Forest is a home rule community and not limited on how much it can raise property taxes, the city imposed a limit through an ordinance restricting itself to a tax cap equal to the rise in the consumer price index, which has been less than one percent in the last few years, according to Kiely.

While the increase is $254,976 now, Holleb projected at the meeting it will climb to $3.6 million in the next 10 years, necessitating the need for revenue from new sources or some form of cost cutting. Schoenheider said all possibilities are on the table.

“If we’re going to deliver (public safety) services in the way we currently do it, we’ll need to look for additional revenue,” Schoenheider said in a DailyNorthShore.com interview after the meeting. “We may have to look at increasing real estate taxes.”

The council can raise the property tax levy beyond the cap with a 75 percent vote of the aldermen, according to the ordinance.

One idea mentioned by Alderman Stanford Tack is adding a fee, perhaps as much as $25 a quarter, to water bills. Holleb said that would solve the problem for a year or two but not beyond that.

Schoenheider said another way to meet the obligations is entering into intergovernmental agreements with other communities such as sharing certain kinds of large capital equipment like a hook and ladder fire truck. The possibility of sharing such equipment with other municipalities was discussed.

Another factor that goes into the calculations is an assumed seven percent rate of return on the police and fire pensions based on management of the funds by independent pension boards. The figure is determined actuarially based on historic trends, according to Jason Franken, a consulting actuary for the city.

The city projects its financial forecasts five years into the future. Schoenheider asked Holleb to go 10 years out to help with longer-term decision making about both revenue and expenses.

In the five-year projections Holleb has been making, revenue has generally climbed at a two percent rate while the cost of personnel is ticking up at four percent. She said that will eventually put the city in a deficit position. Lake Forest has pushed that date into the future by reducing its number of full-time employees from 249 to 213 in the last few years.