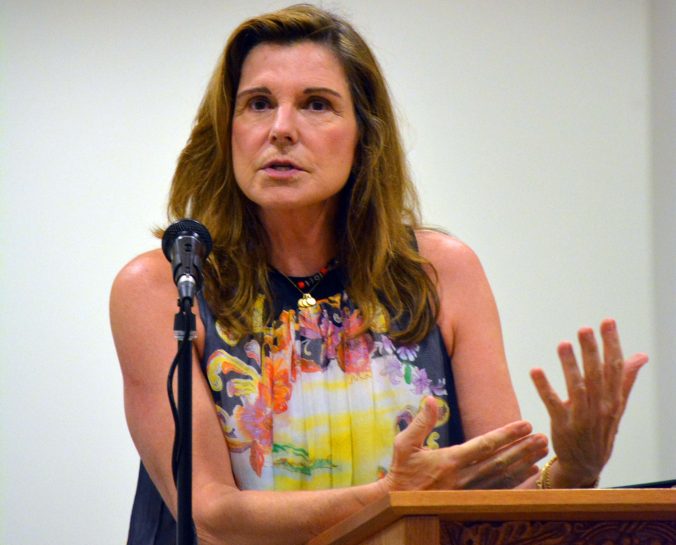 Emmy Award-winning actress Susan Saint James told those attending a dedication ceremony for the new Quiet Trail on the Woodlands Academy campus in Lake Forest that establishing it as a memorial to her 14-year-old son means a lot to her.

LAKE FOREST – Emmy Award-winning actress and Woodlands Academy of the Sacred Heart alumna Susan Saint James returned to the all-girls college-prep high school in Lake Forest to dedicate a new feature of its recently dedicated expanded campus. The 1.5-mile Quiet Trail, funded and built as part of the 2012 anonymous donation of the former Barat College site to Woodlands Academy, was named and conceptualized by Saint James in recognition of a generous donation from the star of four TV series and her husband, television executive Dick Ebersol. Their 2015 gift will fund ongoing programs that support the school’s mission of educating young women in transformative ways.

Saint James chose the trail project because it’s the way she wanted to memorialize her 14-year-old son Teddy Ebersol, who was killed in a plane crash nearly 12 years ago. “I thought it would be a nice way for you to get to know Teddy,” she said. “Having this memorial at my high school alma mater means a lot to me because Woodlands Academy continues to mean the world to me.”

The Quiet Trail is available for use by the general public as well as the Woodlands community. A plaque adjacent to the Cupola memorial near the former site of Barat College’s Old Main calls on all who use it to “Come enjoy God’s beauty; Consider silence.” In reflecting on her four years at Woodlands Academy, Saint James has said, “One of the things I value most from Woodlands is the quiet time we had as part of our daily routine. I feel we all should have a little quiet time in our lives every day.”

She strongly believes the all-girls, Christian-based education she received at Woodlands Academy was an empowering experience that prepared her well to face life’s challenges – such as the huge one on Nov. 28, 2004, when a private plane carrying Saint James’ husband and two of their sons crashed during takeoff in Colorado. Her husband and son Charles survived, but Teddy died. Five signs along the trail’s path contain remembrances of Teddy – in his own words and those of others – chosen by his mother.

“Tonight we celebrate a Quiet Trail that winds around the edges of our picturesque campus,” Woodlands Academy Head of School Meg Steele said. “Interspersed on this path are plaques with wisdom-filled quotes that provide insights into the mysteries of life gathered by a young boy who spent time pondering baffling questions, seeking answers. Sadly, the boy is no longer with us, but the same quotes that spoke to him will live on and help shape the thinking and grounding of a new generation.”

Saint James hopes the trail will provide an opportunity for many to take a walk in silence and a break from their phone. The words of her son she chose for those walking the trail to see are: “Life is a blur; Love is the focus” and “The finish line is the beginning of a whole new race.”

Woodlands Academy has previously honored its famous alumna by dedicating the school’s performing arts center to Saint James who, in addition to her starring roles, appeared in 14 other TV series as well as several films between 1966 and 2011. She is probably best known for her role as Rock Hudson’s wife in McMillan and Wife. Saint James received several Emmy nominations and won the award in 1969 for her role as Peggy Maxwell in the TV series Name of the Game. Of her 20 motion pictures, probably the best known is Love at First Bite (1979). In recognition of this body of work, Saint James received her Star on the Hollywood Walk of Fame in 2008.

Born Susan Jane Miller in Los Angeles, Calif., Saint James was raised in Rockford, Ill., where she began modeling as a teenager. After graduating from Woodlands Academy, she attended the Connecticut College for Women.

Saint James has received five honorary doctorates from Connecticut colleges and universities and has been inducted into the Connecticut Women’s Hall of Fame. Her volunteer service includes serving on the University of Notre Dame Performing Arts Advisory Council. She enjoys traveling, watching lots of sports with her husband and spending time with her family.

Submitted by Woodlands Academy of the Sacred Heart