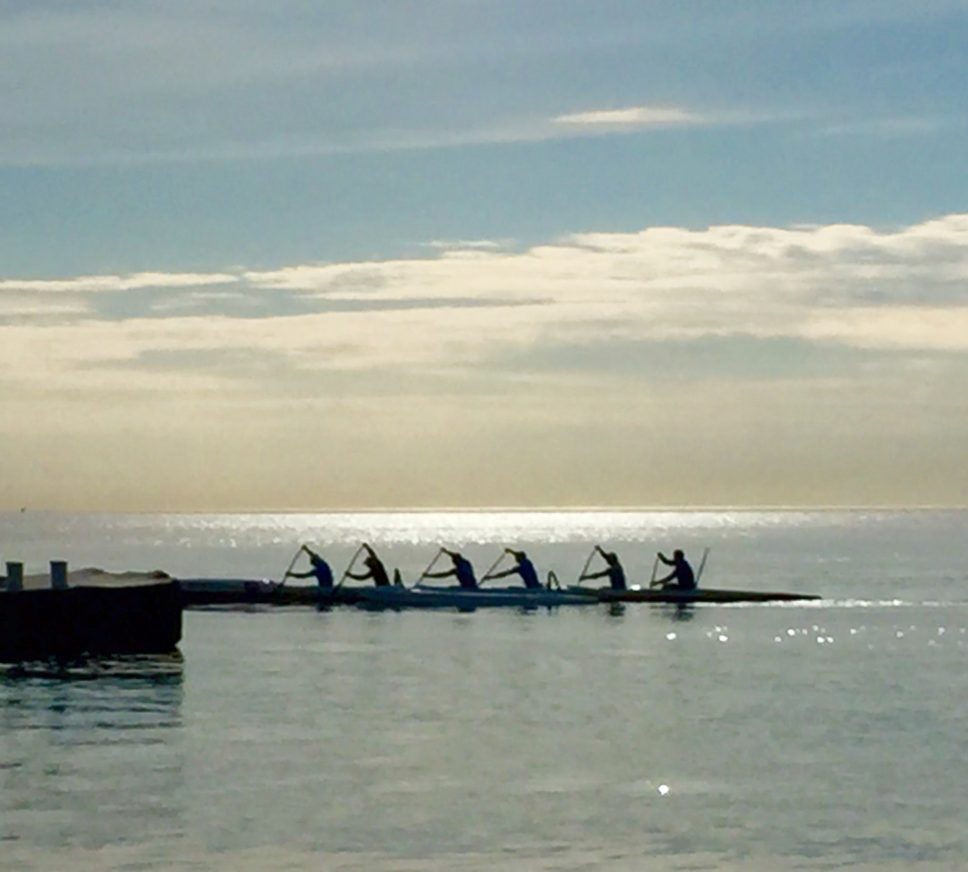 The Outrigger Chicago team heads out from the Highland Park Yacht Club during an evening practice.

HIGHLAND PARK – The Great Lakes are known for many things, but outrigger canoe racing is not one of them. But that situation is changing, as an amateur force of athlete paddlers trains on Lake Michigan off of Park Avenue Beach in Highland Park to compete in international outrigger racing competitions — and they are moving up in the rankings. This October, the Outrigger Chicago team will compete in the world’s most challenging long-distance outrigger race, from Molokai to Oahu, Hawaii — a distance of 42 grueling miles across treacherous waters.

A dot appears on the horizon of Lake Michigan on a windy day this past April — surprising, since nothing else is visible in the vast, frigid body of water. It grows larger, elongating into the shape of a … kayak? canoe? … and then you realize you are seeing an outrigger, paddlers stroking in synchrony. They surge forward over the swells, and the six-person crew comes into focus. When the boat hisses onto sand, the paddlers jump out one by one. They heave the boat up, two people supporting the ama (float), and move it to its summer home on Chicago’s North Shore. The trip from the Dammrich Rowing Center in Skokie down the Chicago River, through the city’s harbor boat lock onto Lake Michigan, then north to Highland Park is almost 40 miles long and involves four shifts of paddlers.

That journey is completed in about six hours, with burgers and beer to celebrate, but the real story is the journey to establish this traditional Hawaiian sport in the Midwest in the first place. And that begins with Tim Flentye and Marek Mroz. They founded Outrigger Chicago in 2012, and invited an experienced outrigger coach and competitor, Brian Jeffries, to help recruit and train a core of committed paddlers. Jeff Winterkorn, Milan Kratka, Christopher Foltyn, Kris Stefanczyk, Marek Kotarski, and Olaf Pippel were soon on board. Some of these men have stories far beyond the Midwest, and each has his own reason for being drawn to the water, but all have settled in the Chicago area — and the result is a new force in the long-distance outrigger-racing world.

Outrigger paddling is “crazy fun,” according to Jeffries. That’s the main reason Outrigger Chicago’s men and women (Tim’s wife, Kristin Flentye, formed a women’s team last year) paddle the sleek six-person outrigger in all but worst conditions. It’s also hard work, and members have to keep their fitness levels high to maintain the pace and length of practices and competitions. It’s not unusual for the team to cover more than 10 miles per session, and some workouts go much longer. The paddlers must perfect their strokes, sustain them for hours on end, and be able to jump out and back into the outrigger as it’s moving. You can often find them on the deck of the Highland Park Yacht Club, recharging between sessions on the water.

This past June, that dedication won the men’s Master team second place in the prestigious Liberty Challenge in New York. Battling the strong currents of the Hudson River, they competed against teams from Hawaii, New Zealand, Brazil, and Hong Kong, in addition to long-established teams from East and West Coast. The women’s team placed 27th in their Liberty debut.

It’s not just about the exhilaration of paddling or the adrenaline rush of competition, though; apparently, outrigger can also lead to romance. After the Molokai Hoe race on October 9, club members Angela Stephenson and Foltyn will be married at the Hilton Hawaiian Village. Instead of a guest book, family and friends will sign a paddle. Jeffries and his wife, Brynn Reedy, also met through their interest in outrigger paddling, as did club members Sue Chang and Pippel.

Visit Outrigger Chicago’s Facebook page and wish the team well as they compete in the Molokai Hoe [link: http://www.molokaihoe.com/index.html]. Better yet, come on down to the Park Avenue Beach and say hello! The club welcomes new members; if you are interested in joining or want to learn more, just send a Facebook message or post on its page and an Outrigger Chicago member will be in touch.

Written by Amy Spungen of Highland Park, a member of the Outrigger Chicago women’s team.