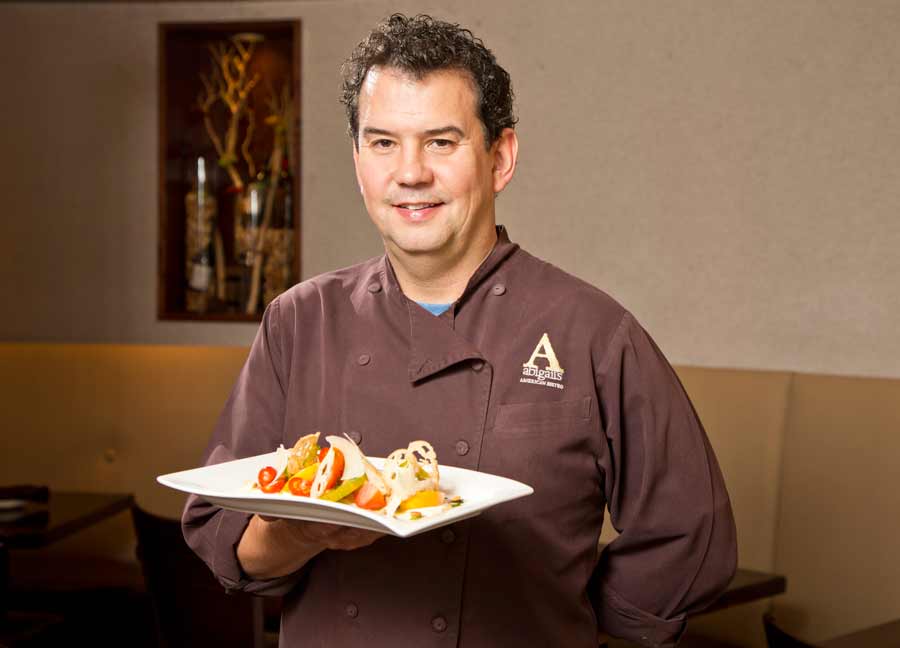 Owner and Chef Michael Paulsen with the Heirloom Tomatoes at Abigail’s in Highland Park. Photography by Joel Lerner/JWC Media

HIGHLAND PARK – Abigail’s American Bistro in Highland Park is named for one of executive chef and owner Michael Paulsen’s twin daughters. Soon his other twin Sophia will have a namesake restaurant in Highwood.

Paulsen explained that at the beginning Sophia wasn’t too concerned about having her own restaurant, as she always thought of Abigail’s as “Daddy’s restaurant.” But when she was five, he said, “Sophia in her maturity wrote up a mock menu and diagrammed a mock restaurant called Sophia’s Magical Pizzeria. She drew the pictures and asked where the pet room and party room would be. We always thought that adding a restaurant would be cheaper than therapy, but we never got to that point.”

Until about a year ago, that is, when the owner of a property on the corner of Green Bay and Half Day Roads in Highwood approached Paulsen about building a restaurant there. The building is currently under construction, and the second floor will be leased out as office space. Paulsen estimated the project will take about six months, and that Sophia’s will open in early 2017. But it won’t be a magical pizzeria with room for pets.

“Sophia’s will be grander (than Abigail’s American Bistro) and we have an architect from the city who has a lot of restaurant experience who’s helping us, and it’s going to be something to behold. I’m excited about it,” said Paulsen. His sous chef from Israel, Evgeni Manolenko, will step up to run Abigail’s when Sophia’s opens. “He’s been here six years and he’s ready. This is my baby, so I’ll be checking in as much as possible.”

The twins recently began third grade at Ravinia Elementary School. Paulsen said his daughters eat pretty much everything at Abigail’s. They recently had an eggplant dish, parmesan and black truffle polenta, a side dish of corn, and chicken paillard (a pounded cutlet).

“They’ll still eat hamburgers, hot dogs chicken fingers, and buttered noodles, but they know to try other things when they’re at Abigail’s,” he added.

Paulsen said the menu at Sophia’s will be of similar stock with some old requested favorites that “I’ll never bring back here, but it’s about moving forward, creativity, evolving and trying to challenge your staff.”

“I have to tell you that the weekend after that issue came out we got murdered with between 70 and 90 burgers a night, but it got people in the restaurant.”

Though Paulsen is known for his artistic plating presentations, he can sum up Abigail’s cooking style in one word:

“Seasonal – our cooking is seasonal,” said Paulsen. “I’m at Mother Nature’s disposal. It’s literally what shows up at the back door, and we go from that direction.” 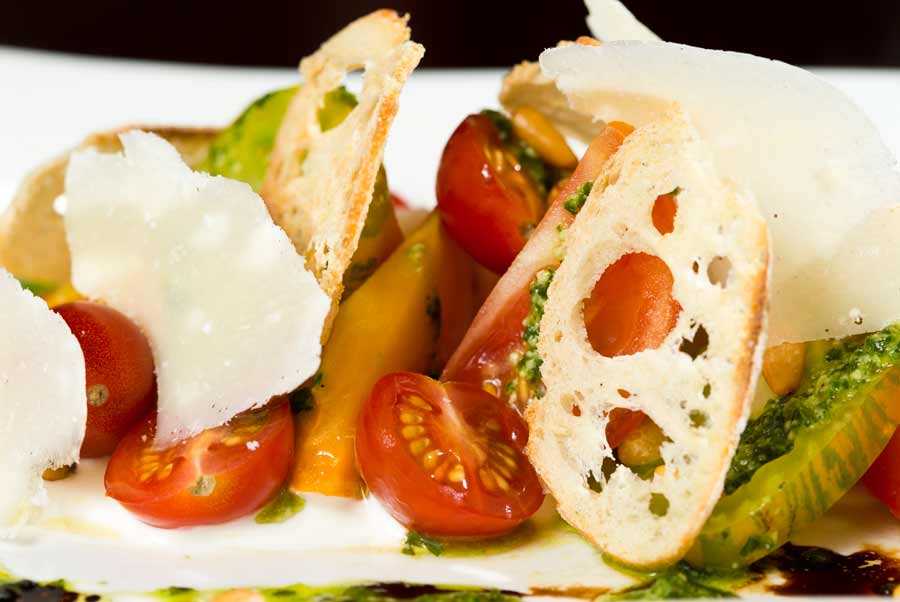 Abigail’s at 493 Roger Williams Avenue does not accept reservations after 6 p.m on weeknights and weekends. Paulsen explained why he adheres to that policy:

“Our price point early on was very approachable and we never really wanted to have an entrée over $22,” he said. “We decided the best way to maintain a business plan at that price point that I could afford to do, would be to fill my seats immediately. By taking reservations in such a small space, you just don’t get the turnover. It’s sort of creating a demand. You know if the worst thing people can say is they can’t get a seat at Abigail’s then that’s working in my favor.”

Waits can reach two hours easily on the weekends, and there are also wait times during the week. Paulsen said he’s met with some angry responses, and one woman even claimed to be a Food Network representative in order to secure a table.

He added that Abigail’s tries to make exceptions for people in wheelchairs or who have other physical limitations that make it hard to wait for a table.

Raised in Atlantic, Iowa, Paulsen came to Chicago from the University of Missouri looking for a summer job, and finding one at a country club in Long Grove, “and that’s basically how I cut my teeth, and fell into cooking,” he said.

Years later when Pauslen was an executive chef at Conway Farms Golf Club in Lake Forest, he decided to open up restaurant. He originally found space at Logan Square in the city, but the landlord backed out. Then he and his wife, Cyndi, a physician, looked at the Merlot space in Ravinia District, which used to be a French bistro. They heard that a Starbucks was opening down the street at 493 Roger Williams Avenue, so they drove over and saw the For Sale sign.

“The corner of St. Johns and Roger Williams Avenues has sort of a fish bowl effect when you come up over the tracks heading east, and the realtor said that Starbucks was interested, but if for some reason the deal fell through we’ll call you,” said Paulsen. “The realtor called two weeks later and said Starbucks pulled the deal off the table.”

Paulsen said his brother-in-law David Karpo helped him establish Abigail’s by working with him on the Abigail’s website design.

In addition, Paulsen and his wife did all of the decorating, which included selecting the wall coverings at the Merchandise Mart downtown before the restaurant opened in April 2009.

“Abigail’s is quaint, it’s comfortable, it’s casual, and it has a resort feel,” said Paulsen. “We live two blocks from here and it feels like we’re on vacation. There’s something about this area of town that we really love. We built it in the style of the area. The stone and the earthy tones – it just felt right.” 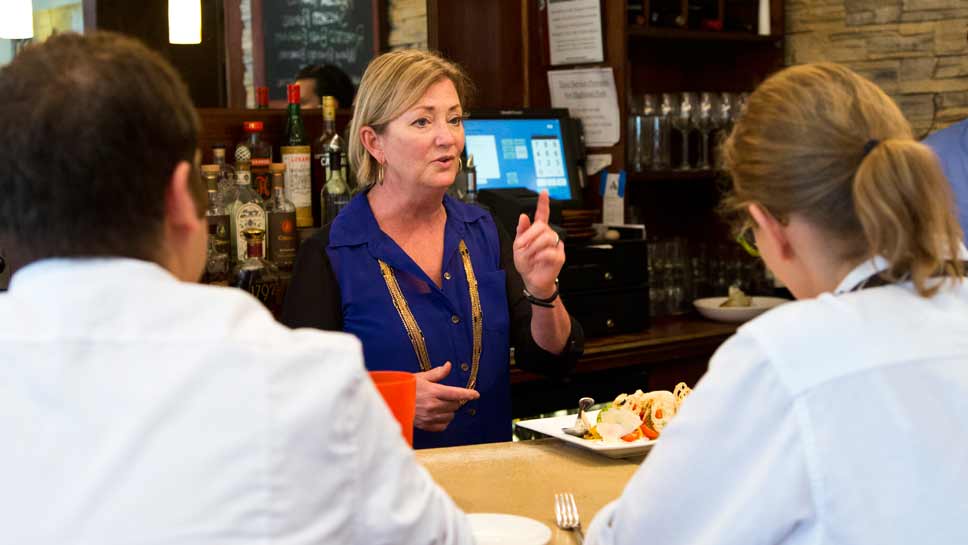 Cindy Jarvis, General Manager, give her staff instructions for the evening at Abigail’s in Highland Park. Photography by Joel Lerner/JWC Media 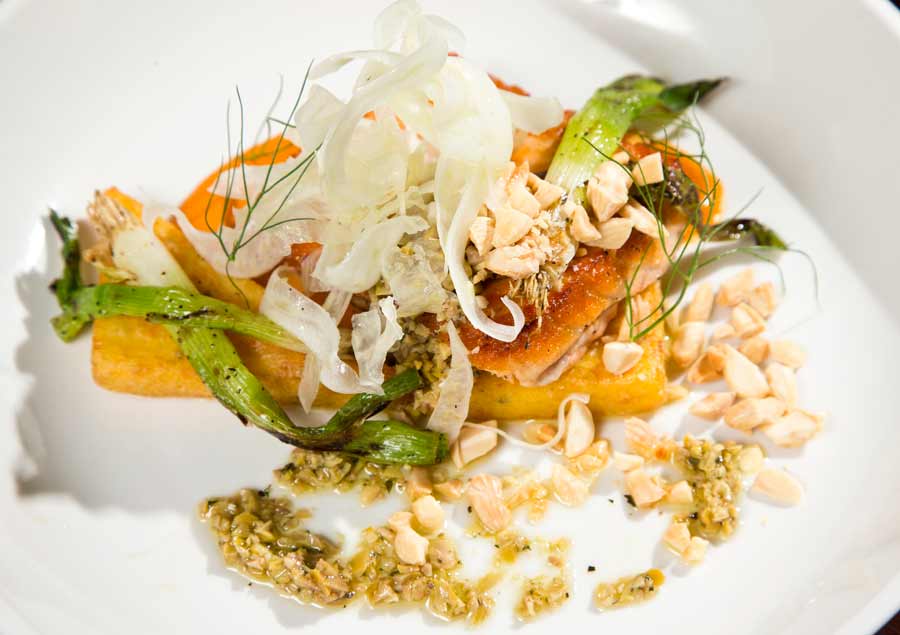