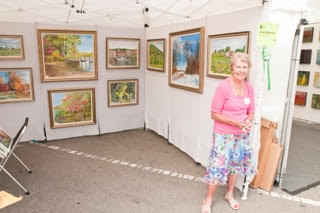 Jacqui Blatchford of Lake Forest stands in her both at last year’s show. Photo courtesy of Rob Kuehnle.

LAKE FOREST — Artists from New York to California and others with distinct North Shore ties will offer their creations at Lake Forest’s annual celebration of art over the Labor Day weekend.

Featuring 180 artists spanning 15 media, the 62nd annual Art Fair on the Square will take place from 10 a.m. to 5 p.m. September 4 and 5 on Market Square in downtown Lake Forest sponsored by the Deer Path Art League.

Among those bringing the local flavor this year are three teachers from the art league. They are Lars-Birger Sponberg of Deerfield, who was last year’s award winner in the oil painting category, Jaccqui Blatchford of Lake Forest, and Doris Volpe of Lake Forest, according to Jillian Chapman, the league’s creative director.

Chapman said Sponberg, who is 97, is a longtime teacher at the league and continues to instruct classes, He also regularly puts on shows both locally and beyond, according to a 2011 DailyNorthShore.com story. He paints primarily rural landscapes. He was judged best oil painter last year.

Volpe, another Deer Path Art League teacher, has had shows in more than 40 galleries including Chicago, New York and London, according to the league’s website. She is also a painter. Blatchford is an acrylic painter who won that catagory in 2015.

Three jurors were chosen to grade the more than 400 submissions before Chapman had to determine which ones get in based on diversity of categories.

“That’s where I have to get involved,” Chapman said. “I look at the scores because each category gets about 10 to 15 artists.” 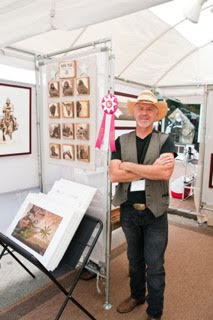 Rudy De Ran stands by his booth at the 2015 Art Fair on the Square at Market Square in Lake Forest. Photo courtesy of Rob Kuehnle.

On the first day of the show, Chapman said, judges, not the jurors who acted as the initial gatekeepers, rate each piece of art in all 15 categories with prizes going to the winner in each one as well as two special awards and the artist judged best in show. Steven Olszewski of Pinckney, Mich., won the top prize last year and is returning this time.

Chapman said two special awards are handed out. They are the Anne F. Flynn Memorial for Abstract and the Dorothy Burgert Memorial Award for photography. Peggy Furlin of Lake Mills, Wis., won the Flynn prize and Rudy De Ran of Vernon Hills took the Burgert. Both will be at the show this weekend.

Other media represented are digital art, drawing and pastels, cyber, glass, mixed media, sculpture and wood, according to Chapman.

Along with the established artists, Chapman said 12 emerging artists have been selected to display their work. They are students from Lake Forest and Lake Bluff schools. 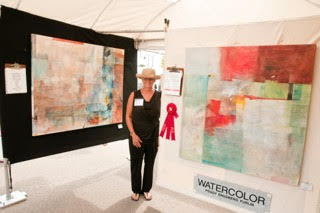 Standing between paintings in her booth is Peggy Furlin. Photo Courtesy of Rob Kuehnle.