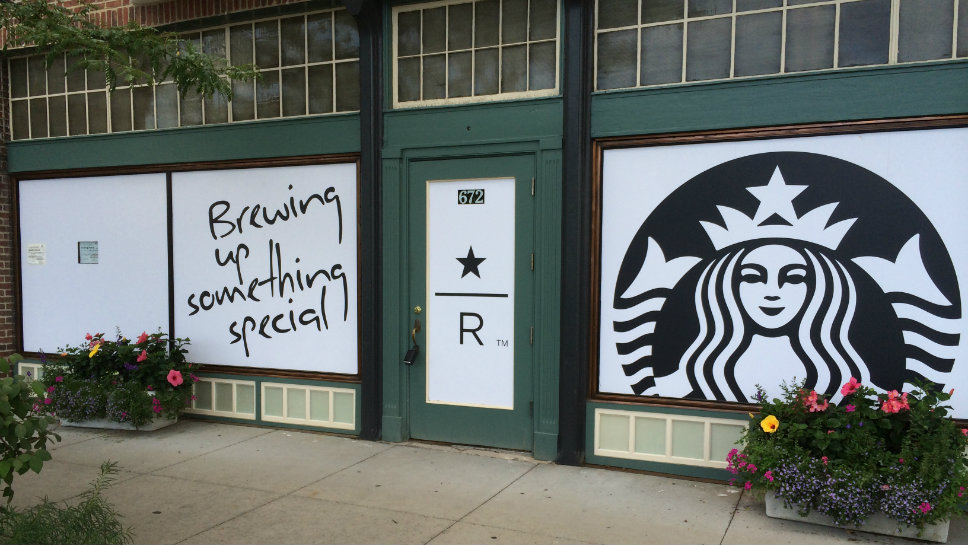 Starbucks will open at this Western Avenue location September 17.

LAKE FOREST — Starbucks will open its new east Lake Forest coffee shop in mid-September at 672 North Western Avenue just off Market Square, and this one will serve beer and wine.

After months of renovation work, the shop will move from its current location at 772 Bank Lane to its new site on September 17, according to three employees in the store August 29 and 30.

“Our understanding is Starbucks will be opening September 17 and we look forward to it,” Rolek said.

The new Starbucks, which is part of the Market Square property, is not the only new thing in the shopping center. Tables and chairs have been installed at several spots around the lawn area in the middle of the square for people to eat or relax there.

Customers at the new Starbucks will be able to drink their coffee outside when weather permits either at the tables on the square or the terrace behind the new shop.

When Starbucks first publically disclosed its plans to relocate at a February 16 Lake Forest City Council meeting it simultaneously asked the aldermen to issue it a liquor license to sell wine and beer. The purpose is to enhance its late afternoon and evening menu for customers who want an alcoholic beverage with their snack or dessert.

Before the city authorized the liquor license at its April 18 meeting, Mayor Donald Schoenheider authorized a closer look at the plans which resulted in moving the time wine and beer could be sold from 4 p.m. to 5 p.m., according to an April 19 DailyNorthShore.Com story.

“Starbucks says this represents only one percent or so of its business,” Schoenheider said at the time in the story. “The timing shouldn’t make a difference to them.”

Along with the wine and beer, the enhanced “Evenings” menu will include items like flatbreads, cheese platters and a truffle mac and cheese to serve in the early evening, according to a presentation company representatives made to the council at its February 18 meeting.

Starbucks will maintain its current east Lake Forest hours from 5 a.m. to 9 p.m., according to the company representatives at the February meeting.