In December 2015, Highland Park native Jesse Kovarsky made his Broadway debut in the Tony Award-nominated revival of Fiddler On the Roof, now playing at the Broadway Theater in Manhattan through December 2016. Kovarsky isn’t playing just any part. He’s the symbolic titular fiddler, whose rooftop balancing act and fiddling opens the show with the triumphant “Tradition” number. A member of the Highland Park High School class of 2006, Kovarsky is a graduate of Skidmore College in Saratoga Springs, New York. No stranger to Fiddler On The Roof, Kovarsky appeared in a production at Highland Park High just a few years before returning to it on Broadway. I had the pleasure of speaking with Jesse about the show and more in July 2016. 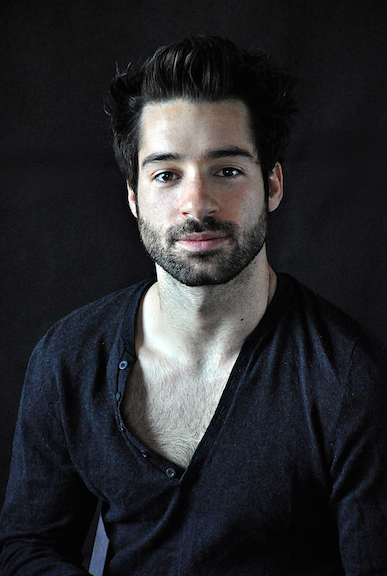 Gregg Shapiro: Jesse, I’d like to begin by congratulating you on the success you’ve achieved in your Broadway debut in Fiddler On The Roof.

Jesse Kovarsky: Thank you so much!

GS: What has the experience of being in Fiddler on the Roof meant to you?

JK: I think it’s provided many different exciting opportunities for me to reflect upon. As a performer, as a dancer it’s given me a chance to be part of a show that I find severely meaningful and is communicating a message that I think transcends across many different cultures and ideals. It reaches a broad audience. When I have performed in other shows, the audience can tend to be a little bit smaller and more niche, especially in terms of contemporary dance. It’s a gift as a performer to perform for a large scale (audience) and to reach so many different people. Also, to get to be performing in a role that some people would consider relatively iconic; it’s amazing to be in the title role, to be a Jewish person retelling a story of my people’s history.

GS: What was it like to perform with the cast on the Tony Awards broadcast in June 2016?

JK: It was so exciting. It was quite the buzz. We had to rehearse at the Tonys really early in the morning and then we had to do our own show and then go back to the Tonys to perform in the evening. It was really interesting because backstage you got to see all the other casts from the other Broadway shows. It felt like we were representing our own little tribe with our interesting costumes. It was cool to be on a platform showcasing every thing that we have to share. It didn’t feel like a competitive night. It felt celebratory. Especially considering what had happened earlier that day in Orlando. It became a meaningful experience. One memory that comes to mind is when I was right about to go onstage and be lifted up in my harness, the cast of She Loves Me was coming off stage and I got a nice high-five from Jane Krakowski.

GS: Was theater a part of your life while you were growing up in Highland Park?

JK: Yes. I started doing theater through Apple Tree Theater, where I got my first interest. I did their summer camp. Then I did Eileen Boevers Traveling Troupe. We did some singing and dancing throughout the Chicagoland area. My first year, we got to perform in Italy, which was an amazing experience. It gave me the travel-bug from that point on and it made me excited to possibly continue performing. When I got to high school, I feel like that’s when I got to explore theater. There wasn’t so much theater in elementary school or junior high. (In high school) I did the musicals and a few straight shows. I was very involved in the theater program there.

GS: What about after high school?

JK: I decided not to pursue theater in college. I was a little apprehensive at first. Originally, I was going to go to school to do a self-determined journalism major. That infrastructure didn’t work out with my school. Then I discovered dance and started dancing in college.

GS: I understand that you were in a production of Fiddler when you attended Highland Park High School.

JK: Yes! I played Avram the bookseller my sophomore year of high school. That was my first experience with Fiddler. It was cool to get see it through that lens as a teenager. I don’t think it had as much weight or impact on me then. Now, I’m so much more appreciative that I’ve had that experience, to have a history with the show before I got into the show. What’s cool about the show is that everyone I engage with about the show has some kind of personal relationship with the show, whether they’ve seen it or been a part of it. It’s amazing to get to be a part of the Broadway revival and have these people approach me with their experiences. 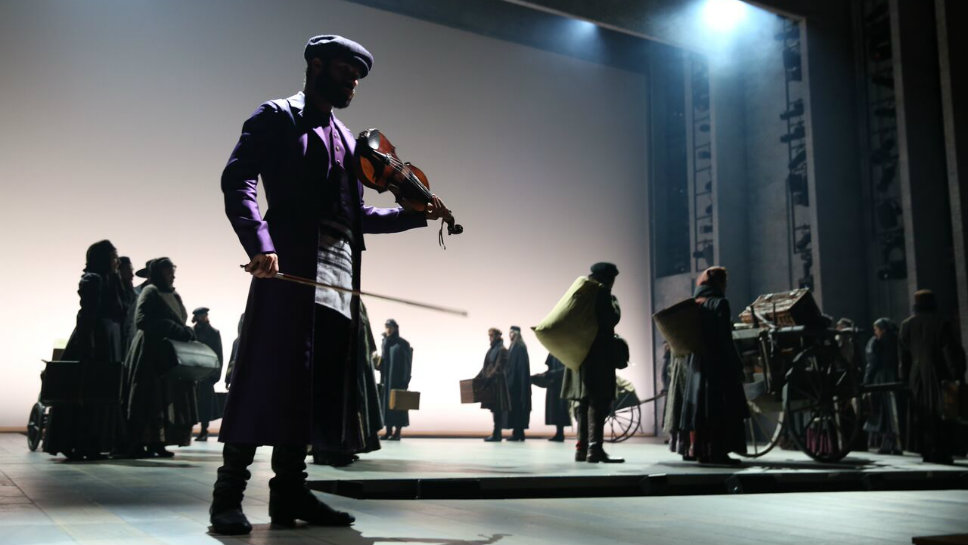 GS: What was the first touring Broadway musical that you ever saw in the Chicago area?

JK: I think one of the first ones I was supposed to see was The Lion King, but I got sick. I believe that Les Miz was the first one I actually saw.

GS: Do you have an all-time favorite musical?

JK: Gypsy is my all-time favorite musical [laughs]. I love that musical so much

GS: Can you please say something about the demands of being a dancer?

JK: It’s a huge physical requirement on your body. Not only do you have to dance on stage for your job but you have to spend a lot of time conditioning yourself. I feel like a lot of my free time is spent prepping my body for the show and easing my body and trying to remove any kind of muscular tension. I’m either constantly going to yoga or pilates or keeping up with my training and going to dance class; constantly going to physical therapy and getting acupuncture and massages just to prevent injury. As you get older and you use your body more and more, the more active you are with it, the more susceptible you are to injury. As a dancer, if you’ve ever been injured, you spend the remainder of your career preventing injury when you can. To be a dancer you want to feel as fully bodied, as strong and malleable as possible. It requires a lot. I have natural flexibility and natural mobility, but there’s only so much my body can actually do. To keep the looseness and availability of my movement, I have to keep up a regimen.

GS: It was recently announced that Fiddler on the Roof will be closing in December 2016. Have you started thinking about what comes next for you?

JK: As a dancer and an actor, the hustle is always there. Even when you have a show, you always have the thought in your mind about what’s next. I’m trying to decide if I want to stay in musical theater or go back into the dance world or pursue the straight theater world. I’m exploring what avenues are in front of me and what opportunities I see ahead. I definitely want to stay performing. It’s really about whether the right project comes along.

GS: Do you have interest in film and television?

JK: Sure. I wouldn’t deny myself the opportunity. I’m definitely interested in pursuing it. But before I pursue I would have to do a little more training. I’m interested in that realm. First and foremost I consider myself a performer at heart, whether that means dancer or actor, I think I’m interested in anything that allows me to inhabit that sphere.

GS: Do you have any favorite Highland Park hangouts that you make a point of returning to when you come back to visit?

JK: Oh, my God! Some of the places that I used to love are gone. There was this place called Full Slab. The best ribs I’ve ever had. I love going to downtown Highland Park. Things are always changing. I like Michael’s. Michael’s is a Highland Park institution. I love going to Ravinia. It’s so magical and unique. Actually, my new favorite place in all of Highland Park is in Ravinia called Coffee Station. It’s on St. John’s across from the train station, right next to Abigail’s. They do such a good job. Every time I come to Highland Park I make a point of getting a coffee from them.

GS: Finally, Jesse, what are the rewards and challenges of being a triplet?

JK: [Laughs] No one has ever asked that. It’s a great question. I think it provided a really healthy way of growing up. I grew up and went through phases of life with someone beside me. Whether we were immensely close or not, it always felt like I had a companion at every rite of passage. It added a uniqueness to my identity know that I’ve got two other people in my life who are supremely connected to me. While we have all made different life choices, we are supportive of each other. I think having that unconditional support has allowed me to take risks in my life knowing that I have my brother and sister there who will keep me in touch with who I am. As much as I pursue being a strange, weird artist, going to funny and obscure jobs or even having an incredible job on Broadway, I always feel like they give me a sense of groundedness. They always bring me back to normality and who I am. I think that’s how being a triplet has helped me.