A young Jim Styer stands in a clothing store, waiting for a customer to finally enter it, browse, maybe try on an item or two. It is the mid-1950s. Styer is a student at Hyde Park High School in Chicago.

A quiet workplace irks the teenager. He folds sweaters. He folds shirts. He folds the sweaters again. Kill time and hope somebody, anybody, breaks the silence in the men’s department.

“Slow days were boring,” Styer, now 78 and a Highland Park resident since 1965, recalls from a booth at Country Kitchen in Highland Park. “When it was busy, it was great, always great. I like selling.”

He started selling insurance in 1960, his line of work today. He still likes selling. Styer is a managing director of Mesirow Insurance at Mesirow Financial.

The Michigan State University graduate orders coffee and a bialy with butter. He had consumed a bowl of oatmeal and information from the Wall Street Journal hours earlier, at 6 a.m., the start of his healthy regimen. Ensuing Things to Do in his daily regimen this summer, weather permitting: a round of golf, a bike ride around Chicago Botanic Garden in Glencoe. 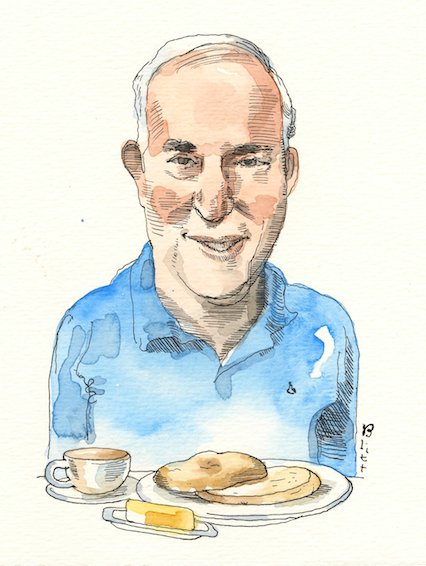 James Charles Styer does not intend to sell me insurance from his seat in a booth.

I am his student for a hour, enrolled in a course I later dub, “Healthcare Foundation of Highland Park 101.” Styer serves as the foundation’s Chairman of the Board of Trustees. Launched in 2000 to bolster the healthcare mission of the NorthShore University HealthSystem hospital in Highland Park (formerly Highland Park Hospital), the foundation — not affiliated with the hospital — has given more than $90 million to nearly 60 organizations, many of them small nonprofits in Highland Park and surrounding communities.

“A lot of people think all of Lake County is wealthy,” Styer says. “It’s not. A lot of people need assistance; we’re assisting them. Our focus is on the small organizations, ones that truly need the funds, ones that are doing significant things for many people. There’s this operation in Highland Park [Family Network Right from the Start], addressing needs of families in the basement of a Presbyterian church. It provides prenatal education, classes for kindergartners. The people running it are hardworking people, good people. They deserve our community’s support.”

Family Network Right from the Start applied for a grant from Healthcare Foundation of Highland Park. The foundation distributed it. Gladly. The foundation is interested in any organization committed to improving the health of a community’s members.

Styer shares another example of a grantee’s worth to the community, noting the impact Friends for Health has had on uninsured and underinsured residents in southeast Lake County. Friends for Health partnered with the Lake County Health Department more than a decade ago. The joint effort paved the way for the construction of the North Shore Health Center in Highland Park, located at 1840 Green Bay Road.

The center opened in 2006. Patients receive competent and compassionate care, medical and dental. Patients heal. Patients return to their families, to their jobs, eager to stabilize at home and to produce at work. Each community has a collective heartbeat. Styer and the rest of the trustees at Healthcare Foundation of Highland Park have been listening for years. Jumpstarting, too, when needed.

“I walk in there and see people receiving health care … people who normally would not have been able to receive it,” Styer says. “People are afraid to go to a hospital. Friends for Health, one of our bigger grantees, has been servicing those people for years. Wonderful. What’s going on there is wonderful.”

Styer mentions GLASA (Great Lakes Adaptive Sports Association) in Green Oaks; mentions the van services for the elderly and the sick in Moraine and West Deerfield townships; mentions the Zacharias Sexual Abuse Center in Gurnee; mentions the Cradle Adoption Foundation in Evanston. Grantees, all of them. There are others. But there are other organizations out there, small nonprofits among them, that don’t know what Healthcare Foundation of Highland Park does. This can’t be, Styer insists. Styer wants to get the word out. Styer, sporting a Fitbit, would be willing (my guess) to dismount his bike and climb the highest hill in Lake County to shout the foundation’s mission if it would generate dozens of fresh applications for grants.

The foundation has millions and millions of dollars. It does not want to sit on the funds.

If you’re looking for a sedentary man in his late 70s, don’t look for Styer. The man likes to move. He works out every day, attacking an elliptical for at least 30 minutes to go with his time on a bike, usually 45 minutes. He has golfed in Canada, in England, in Australia, in Columbia, in Israel and in Mexico. You get to do that when you are a member of the International Golf Society. The group’s next annual outing is set for Sicily, Italy.

“It’s like going to camp,” says Styer, married to Merle for 29 years and the grandfather of six.

Jim and Merle celebrate their wedding anniversary this month. They plan to redo their kitchen, their anniversary gift to each other, no wrapping paper necessary.

The conversation shifts to Styer’s college years, the early ones, his final two years in clothing sales, and his sneaky sense of humor surfaces. He went to the University of Illinois-Chicago for a year before transferring to Roosevelt University in the city, also for a year.

He waits. He chuckles.

The serious septuagenarian, running a vital foundation for a number of communities, has a fun side.

For more information about the Healthcare Foundation of Highland Park and to submit an application for a grant, visit hphealthfoundation.org.