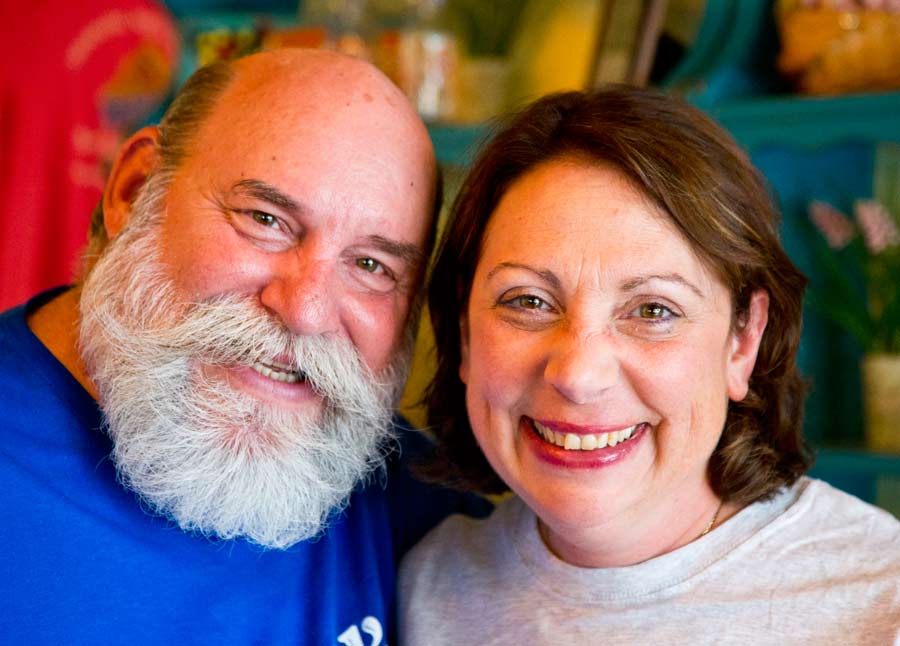 HIGHWOOD – Though Lovell’s of Lake Forest closed its doors in April of 2015, Chef Jay Lovell and his wife Darice Lovell are still busy creating many of their most popular dishes at affordable prices at Jay Lovell’s in Highwood.

“The blackened salmon with the avocado salsa dish was going for about $28 at Lovell’s of Lake Forest, and here it’s about $15,” said Jay Lovell. “It’s the mainstay here, and we sell more of it than anything else in this joint. We really wanted to keep our prices as low as possible for everyone.”

The Highwood fast-casual restaurant doesn’t have waiters and wait staff. Jay Lovell’s four cooks began working with him in Lake Forest 17 or 18 years ago, and they followed him to Highwood. His newest cook came onboard about four years ago.

“We all know each other and we’re like family,” said Jay Lovell. “They know what I like and I know what they can do.”

He said it took a few years for his wife to persuade him to say “yes” to the smaller business. “Little by little I was working on dishes that I knew I was going to bring here,” he said.

Darice Lovell said she had always wanted to open something small, and she was excited when Linda Haight from Artquest next door, and Julie Whitehead Holdsworth from Whitehead Studio two doors down, told her the space was available. Artquest designed floral arrangements and Whitehead Studio created ornaments for parties at Lovell’s of Lake Forest.

She thought it was a good space and could envision it as their restaurant. Jay Lovell’s opened in May 2014 at 766 Sheridan Road between Sweet Peas Ice Cream and Artquest.

Darice Lovell said burgers are a top seller, as well as gumbo and chili, which originated at Lovell’s of Lake Forest. Other seafood specialties include Blackened Redfish with corn succotash and Walleye Almondine.

The couple ran the upscale Lovell’s of Lake Forest after Chef Jay Lovell’s dad, Captain James Lovell, sold the business to them in 2005.

“What’s nice about Jay Lovell’s is that it just keeps going,” said Darice Lovell. “There’s always somebody around that wants a burger, salad, salmon or one of our delicious soups. Everything is homemade including soups and sauces. Lovell’s is different because it was kind of a destination, and Jay Lovell’s is a neighborhood restaurant.”

At the Highwood restaurant you can sit at a table and watch a game on the big screen TV, pull up a chair to view live entertainment as the cooks prepare your meal, or park yourself in a window seat.

You might run into Captain Lovell and his wife, Marilyn, who often drop by for one of their favorite dishes.

“What’s it like growing up the son of an astronaut?  My standard answer is he’s just like any other father,” said Jay Lovell. “He went in a space capsule flying around in space.”

Jay Lovell said his father did things any father would do, such as take him camping. They talked often. His father was often away from home, but so too was the son: Jay Lovell left his home in Texas to attend military school for five years in Delafield, Wisconsin.

“Going to military school shaped my work ethic,” he said. “I’m always antsy if I’m not on time some place. I work, work, work. When I had Lovell’s, it was seven days a week. It’s the nature of the beast for this kind of business.”

Jay Lovell said that if his dad wasn’t an astronaut, “he probably would’ve gone to Vietnam and flown off aircraft carriers, because that’s what his job was before NASA grabbed him and brought him over to Houston. He was in the right place, at the right time, with the right job, with the right people.”

Jay Lovell said his dad was flying rockets off his roof in Milwaukee and wrote a paper about flying to the moon for his eighth grade final project.

Jay Lovell said his father was originally slated for the Original Seven [They piloted the manned spaceflights of the Mercury program from May 1961 to May 1963] but he was passed over when they pulled him from the Gemini Program.

He recalled that day, which occurred when Jay Lovell was in second grade:

“We were sitting at Virginia Beach and he came in the house and said something to my mom and within three days we were living at the Ellington Field Air Force Base in Houston, Texas,” said Jay Lovell. “We lived in an old WWII training barracks with four families. The rooms were made into little rooms with sheets for walls. We would go to the Officers Club to eat until we found a house in El Lago, Texas. My mom was behind him 100 percent all the way.”

While attending Milwaukee School of Engineering, Jay Lovell realized “calculus wasn’t going to be it,” so he decided to go to Kendall College in Evanston. There, he met his future wife.

Darice Lovell said they met when Jay Lovell was a student and she worked in admissions. They were 31 and 32, and dated for five years.

“Jay was scared to death to get married,” she said. He invited her to move to Hawaii with him and she asked if they were going to get engaged. When he said no, and explained that she would have her own apartment, Darice Lovell quickly put him in his place:

She remembered saying, “I’m going to leave my good job, and everyone I know and love and move to Hawaii to date you?”  The couple has now been married for 24 years and has two daughters: Emily, who is nearly 22, and Katie, age 18. Katie will be starting Columbia College in Chicago this fall, and Emily will begin her senior year at Indiana University. The family has been living at its Lake Forest home “in the woods” for 11 years.

The soon-to-be empty nesters won’t be spending more time together as she works days and he works nights except for Sundays. But they still make time for cozy Sunday dinners, and they enjoy chatting with their return customers at Jay Lovell’s.

“A good 50 percent of our clientele we see on a daily basis,” said Jay Lovell. “I have one gentleman who orders the same thing every night for him and his wife, and last night I had some new customers. I kind of gear them into the right dishes.”

Jay Lovell prides himself on his big and tasty burgers.

“Most places you get this five ounce patty, and here the burgers are about seven to eight ounces,” he said. “I had this one young lady come in and order a double burger. I said it’s bigger than you, and she ate the whole thing. The burger stands a good seven to eight inches tall, and when you put bacon, lettuce and a tomato on top of it, it’s a tower.”

He shared his mantra for success:

“One thing I learned years ago, and I’ve done this for many, many years – I feed people,” he said. “If you walk in here and you order your food, and you walk out hungry that is your fault, not mine. I feed people – that’s what I do.”

The salmon with asparagus … 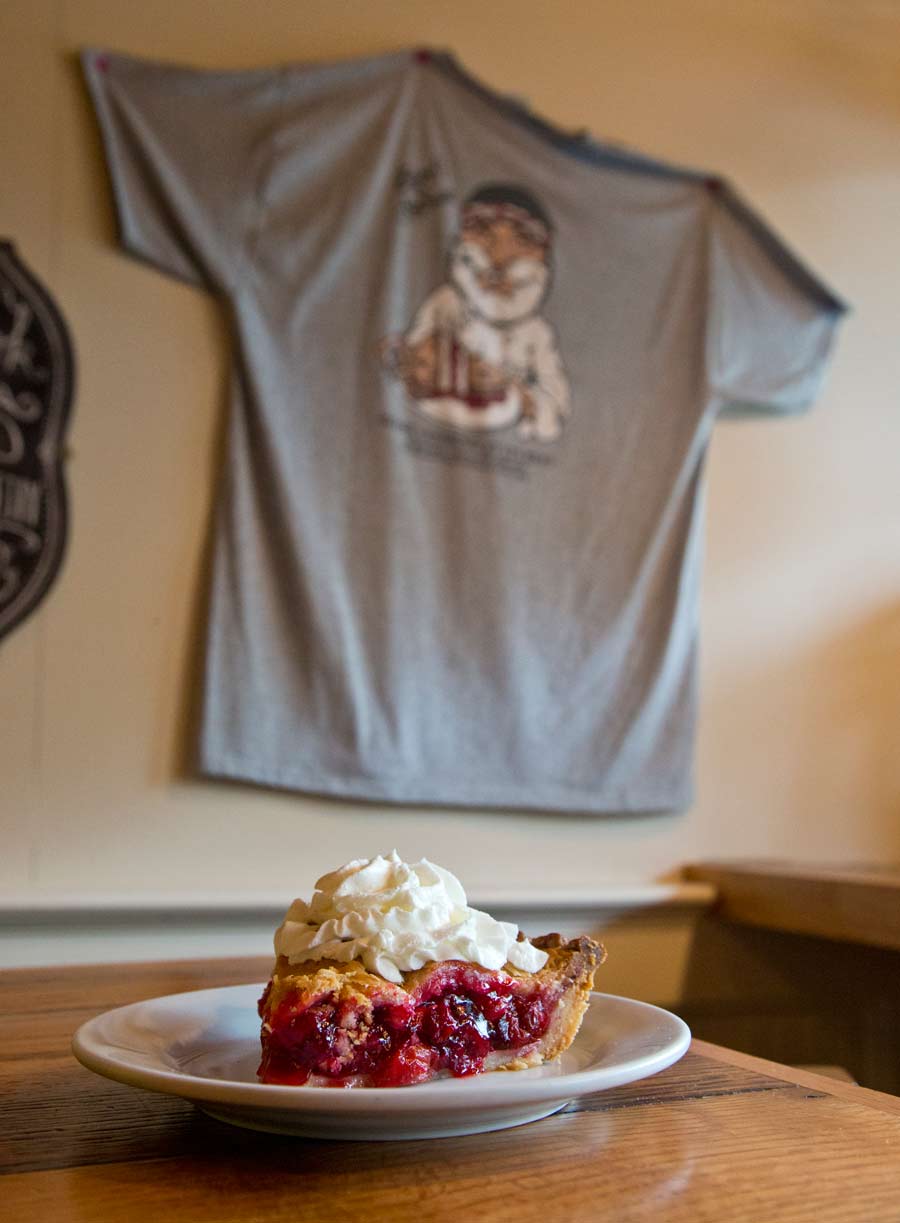 The cherry pie and its fellow pies have a reputation and fan base of their own. Photography by Joel Lerner/JWC Media 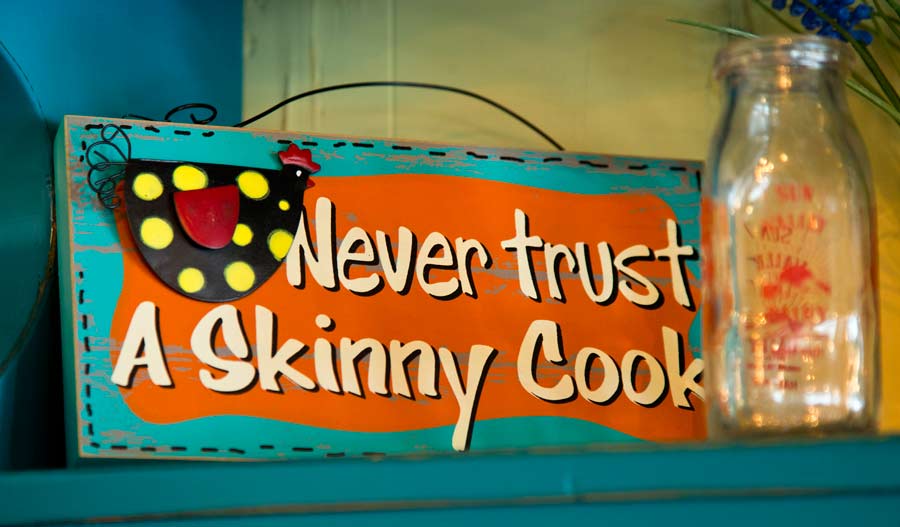 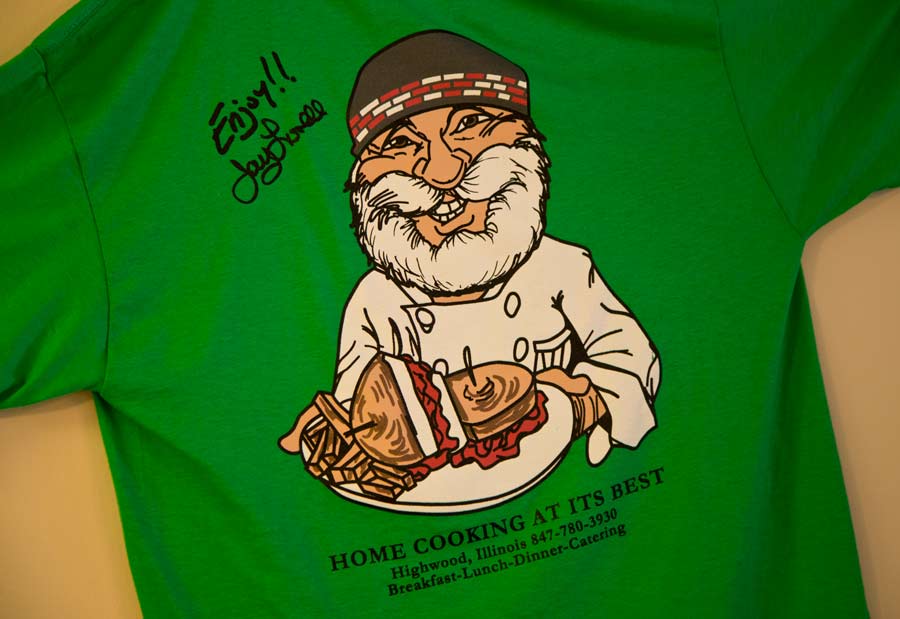 What the T-shirt says …