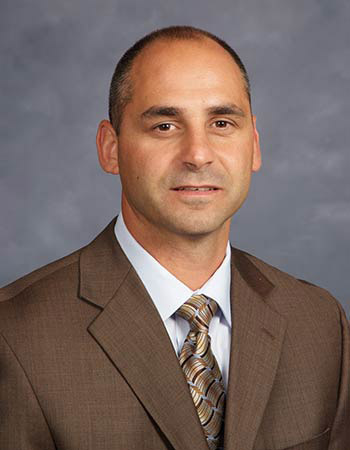 NORTHFIELD — This summer marked a homecoming for New Trier Athletic Director Augie Fontanetta, who has taken over the reins of a storied athletic program at the school where he started his career.

Since his July 1 start, Fontanetta has been reacquainting himself with the school, the coaches, and the needs of the Athletic Department. Now, he said, it is about time the students and staff return.

“I’m looking forward to seeing the hallways fill up with kids and the staff,” Fontanetta said, anticipating the first day of school, Aug. 29. “It creates an energy and excitement for the new school year.”

Fontanetta took over the program from veteran Athletic Director Randy Oberembt, who retired at the end of June. He began his career at New Trier in 1994 after receiving his degree from Northern Illinois University. From the fall of 1994 through 2008, he taught kinetic wellness and coached freshman football, junior varsity softball, and wrestling at all levels before taking an advancement opportunity at Fremd High School.

At Fremd, Fontanetta worked as the athletic director, later becoming the director of athletics and activities for District 211, a five-high school district that includes Fremd, Conant, Hoffman Estates, Palatine and Schaumburg.

“What I like about this position now (at New Trier) is that it’s a combination of everything I’ve done,” he said. “It’s home for me. It’s New Trier, where I spent the majority, two-thirds, of my career. I have the administrative role tied into being in a building with kids and working with the coaches. … In a lot of ways, it’s like I never left.”

The start of the school year also means something special for Fontanetta: sports will be in session.

“I’m really looking forward to fall sports starting,” he said. “And not just the football games on Friday nights — every event that comes with the fall. There is a certain excitement that comes with fall athletics. There is still excitement in the winter and spring, but the fall is the beginning of the school year. We’re starting again.”

There is still something to be said, however, for those Friday nights lights on the grid iron at the Northfield Campus.

“It’s a community event where everyone contributes,” Fontanetta said of the varsity football games. “You have our pep band, our cheerleaders, even people who don’t have kids in the program anymore coming to the game. I love the community support. It’s an event that brings everyone together, and everyone is connected. There is that excitement, that buzz.”

In his new role, Fontanetta is planning to work one-on-one with coaches to help build their programs and support them this fall season.

“It could be the person that’s been here 30 years or the person here three months, I put myself in their role and think ‘How can I get your program better? What can we do together to get there?’” he said. “I really enjoy that part.”