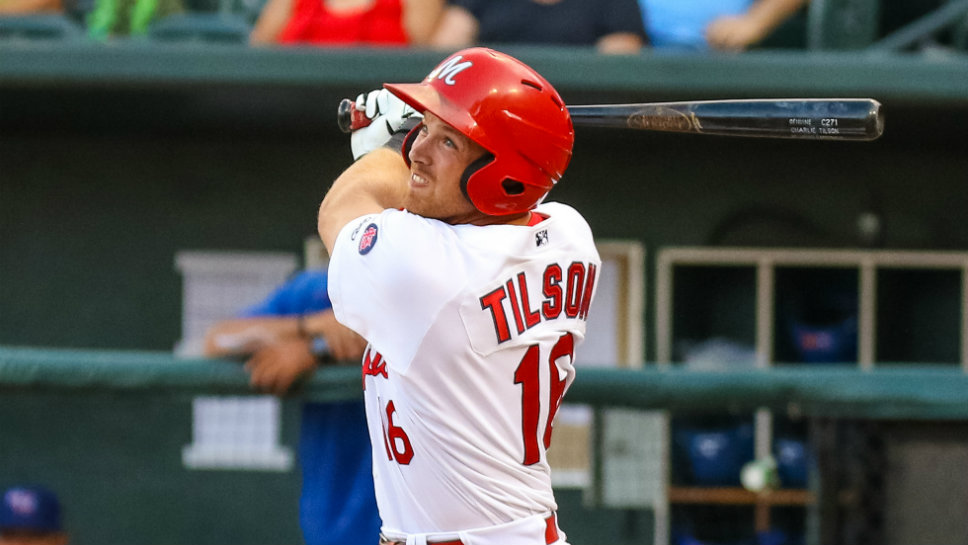 New Trier grad Charlie Tilson, an outfielder for the Memphis Redbirds, swings away during action this summer. PHOTOGRAPHY BY MEMPHIS REDBIRDS

He’s on the cusp.

Speedy center fielder Charlie Tilson continues to get high marks in the St. Louis Cardinals organization. The 23-year-old New Trier graduate, who is hitting .284 with a .349 on-base percentage and .761 OPS (on-base plus slugging), could be a September call-up for the big club.

The 5-foot-11, 195-pound Tilson, a second round pick in 2011 by St. Louis, is the prototypical top-of-the-order guy. He’s hitting .315 in the leadoff spot this summer for the Triple A Memphis Redbirds.

He’s put his speed to efficient use. Tilson has swiped 15 bases in 18 attempts in 95 games.

And he’s got what Major League managers are looking for in a No. 1 hitter: punch. Tilson doesn’t hit a lot of home runs (4), but he does lace the ball into the gaps. He’s got 15 doubles and eight triples (tying a Memphis Redbirds single-season record).

Tilson usually is not one to fall into extended slumps. Currently, he has put together a modest six-game hitting streak.

Ben Klimesh: At one point, things were going awfully well for the 6-foot-4, 220-pound right-hander. The Wilmette native, who pitched collegiately for Trinity University in Texas, was promoted all of the way to the Cincinnati Reds’ Triple A affiliate in 2015.

But despite having solid stats — 2-0 record, 3.65 ERA — Klimesh was afforded only 12.1 innings with the Louisville Bats. Then, after being moved to the Double A Pensacola Blue Wahoos, he had a couple of stints on the disabled list.

Luke Harrison: Selected in the 35th round of the 2015 June Free Agent Draft, Harrison has proved to be a value pick for the St. Louis Cardinals.

The 23-year-old right-hander has been an effective reliever for the Class A Peoria Chiefs. The Glenbrook South grad, who went to Indiana University, has allowed only 27 hits in 40.1 innings this spring. His strikeout-to-walk ratio is 38-15. He’s 3-1 with a 2.01 ERA and 1.04 WHIP. The opposition is hitting just .182 against him.

Alex Hermeling: The Los Angeles Dodgers have to be keeping an eye on this 6-foot-5, 230-pound right-hander.

Hermeling, a Glenbrook North product, is putting up fairly eye-popping numbers for the Great Lakes Loons in the Class A Midwest League this summer. The reliever has worked 47 innings and given up only 33 hits. He has recorded 54 strikeouts to go along with 22 base-on-balls.

Hermeling, who pitched collegiately for Louisiana-Monroe, was a star at GBN. During his senior year, he went 9-1 with a 1.72 ERA with 92 strikeouts in 62 innings.

Chris Godinez: Being a Yankee and playing in the South Atlantic League appears to be a good fit for the Lake Forest High School graduate.

Godinez has collected nine hits in first 20 at-bats for the Charleston RiverDogs, a Class A affiliate of the New York Yankees, this summer. He’s hitting .450 with three walks, three runs and one steal.

Prior to playing in the Sally League, things had been a little rocky for the 5-foot-8 second baseman. Drafted by the Los Angeles Dodgers in 2015 (18th round), the ex-Bradley University star hit .226 with a .385 on-base percentage for the Ogden Raptors in his first pro season.

The Dodgers released the 23-year-old on March 10. He was picked up eight days later by the Yankees, who initially assigned him to the Staten Island Yankees. He was promoted to the RiverDogs despite hitting only .189 in 15 games with Staten Island.

Jason Goldstein: The hamstring is healed. It’s go-time for the former Highland Park High School and University of Illinois standout.

Goldstein, 22, a ninth round selection by the Seattle Mariners in the 2016 June Free Agent Draft, proved to be instant success in his pro debut on July 14. After one game, he was hitting 1.000.

As a member of the Arizona Rookie League (AZL) Mariners, Goldstein came off the bench in the ninth inning and singled home a run in his team’s 4-1 victory.

The catcher’s stay in the Rookie League was short and sweet. In five games for the AZL Mariners, he hit .400.

On July 20, Goldstein was promoted to the Class A Short Season Northwest League. After going hitless in game one, he had two hits and a stolen base against Salem-Keizer on July 23.

The ex-Loyola Academy star has earned a quick promotion during his first pro season. The speedy outfielder, a 2016 draft pick of the Detroit Tigers, hit .351 and lasted all of 18 games in rookie ball with the Gulf Coast League Tigers West squad.

On July 22, Woodrow was assigned to the Class A Short Season Connecticut Tigers. On July 23, he went hitless in four at-bats.

No worries. Woodrow will get plenty of opportunities to rectify that.

His time in the Gulf Coast League was quite impressive. The 21-year-old left-hitting Woodrow, who played his college baseball at Creighton, had an on-base percentage of .441. His OPS was .915. And he had five steals in five attempts with seven doubles and nine runs batted in.

Charley Gould: Check out the RBIs.

Gould might not have a high batting average (.241) at the moment, but the Lake Forest High School graduate has come up with some timely hitting (14 RBIs) during his pro debut with the Oakland Athletics in the Arizona Rookie League (AZL).

The 23-year-old first baseman, who was drafted in the 26th round, is coming off a terrific senior year at William & Mary (22 doubles, 46 RBIs).

The 22-year-old relief pitcher, a 14th round pick by Toronto, has seen action in seven games for the Bluefield Blue Jays rookie league team.

Competing in the Appalachian League, Hall (6-2, 212) has registered 13 Ks in 10 innings while allowing eight hits and four walks. His ERA is 2.70. He has one win and one save on his ledger.

Working out of the bullpen is a familiar role for Hall, who was the closer for Elon University this past spring. A converted catcher, he had 10 saves for the Phoenix.

The former Glenbrook North standout debuted with the Pittsburgh Pirates rookie league team on July 20. And he came through immediately. In a Gulf Coast League game against the Phillies, Synek went 1-for-3 with a walk.

Two days later, Synek, an undrafted free agent who played collegiately at the University of Evansville and Oakton College, had a run-scoring triple in the seventh inning in a 10-0 win over the Yankees. He also drew a walk.