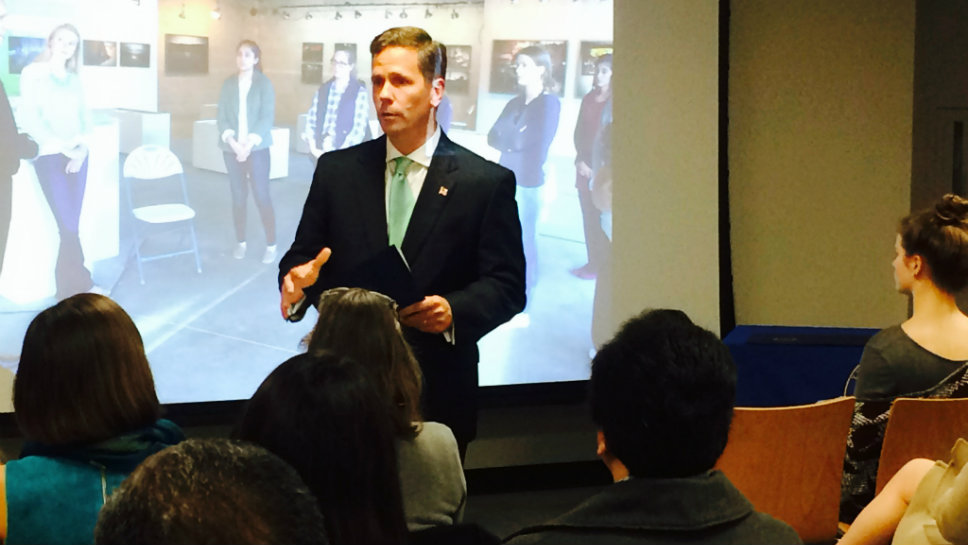 Rep. Robert Dold (R-Kenilworth) talks to the a group of high school students.

Recognizing addiction is a disease in need of treatment, the Comprehensive Addiction and Recovery Act authored in part by Rep. Robert Dold (R-Kenilworth) is now law.

President Barack Obama signed the bill into law July 22 in Washington after it passed the House of Representatives and Senate with overwhelming majorities, part of which provides more than $10 million to increase access to the heroin antidote Naloxone at Dold’s behest.

Earlier in July, the legislation passed the House 407-5, and the Senate 92-2, according to a news release from Dold’s office.

The North Shore congressman said he started pushing the issue early this year when he introduced Lali’s Law as separate legislation. It made Naloxone more accessible. He was inspired by the Laliberte family of Buffalo Grove, whose son Alex Laliberte, a Stevenson High School graduate, died from a drug overdose seven years ago.

In the hands of first responders in Lake County since late 2014, Naloxone has saved 94 lives, Dold said. It reverses what would have been the fatal heroin overdose. The first was in Deerfield on December 25, 2014, according to a Chicago Tribune story at the time.

Lali’s Law allocates $10,815,000 for grants to states that don’t have the resources to make Naloxone available, according to Dold. He said states can apply for grants up to $500,000.

After Lali’s law passed the House May 12, Dold began working with other members to include it in the comprehensive act which deals with 18 addiction-related issues.

“This is one part of a much larger problem dealing with heroin overdoses,” Dold said of making Naloxone more accessible. “Young athletes take prescription drugs for pain, turn to heroin and overdose.”

The House passed the comprehensive act May 16 while the Senate passed its own version with some different provisions, according to Dold. He was appointed to a conference committee with House and Senate members to resolve the differences between the two, and he made sure Lali’s Law was included.

One person pleased with the new law is Highland Park resident Michael Filler. He runs the Jordan Michael Filler Foundation he started to honor the memory of his son, Jordan Filler, who died of an overdose in 2014.

“This is a step in the right direction but much more is needed,” Mark Filler told DNS.com. “There is a massive need for funding. Addiction is a disease like cancer or diabetes.”

Dold agrees more has to be done to deal with addiction. With one person dying every 19 minutes across the country from prescription drug or heroin overdoses, he said more laws and other efforts should follow.

“There’s no doubt about it that there’s more work to be done to save lives,” Dold said. “The World Health Organization predicts increased access to Naloxone could save another 20,000 lives every year. Our fight against the heroin epidemic won’t stop here.”

Filler said he wants to see people with addiction treated with medication that has already been proven successful just like remedies for other diseases.

“Treating addiction without medication is like treating diabetes without insulin,” Filler said.

While working with the House-Senate conference committee, Dold learned about things done in other states like providing more drop boxes to dispose of unused prescription drugs and making treatment more available. Those issues are addressed in the comprehensive bill.

“Mundelein now has a program where you can go into a police station and get treatment without worrying about getting locked up,” Dold said. “That started in Massachusetts. It’s now in five police stations in Lake County.” Lake Forest is one of them.