An avid Pittsburgh Penguins fan walks into a restaurant and shakes hands with me, an avid Chicago Blackhawks fan. We sit at a table at Egg Harbor Café in Lake Forest. We order oatmeal. It is early June, and Andy Duran’s Pens are in the Stanley Cup Final, skating with Sharks from San Jose. My Hawks, first-round victims, had turned in their equipment weeks ago.

Duran has every right to gloat or litter our conversation with trash talk. He does neither. Too polite.

“I like all professional teams from Pittsburgh,” Duran, a native of Jacksonville, Florida, and a current Lake Bluff resident, says. “One of my favorite trips, as a kid, was traveling to Bradenton [Florida] in the spring to watch the Pirates play spring training games. I’d attend Steelers-Jaguars football games when the Steelers visited Jacksonville.

“I ran track [at Nease High School in St. Augustine, Tim Tebow’s alma mater]. I played baseball in high school. I played second base and shortstop and bench … mostly bench.”

Duran, 37, is a starting quarterback today, Chief Signal Caller (Executive Director, actually) of Lake Forest-based LEAD (Linking Efforts Against Drugs). Before landing the job, in 2012, three local teenagers had committed suicide in a span of 87 days. One suicide in a year is exactly one too many. Three, in a quarter of a year? The number shook the Lake Forest, Lake Bluff and Knollwood communities.

“It’s one of the reasons I applied for the position,” he says. “It’s still a concern in our country. It’s not going to go away. At LEAD we primarily address the causes of drug abuse among teens and young adults. We take a community approach, seeking assistance from businesses and educators, non-profits and law enforcement. Drug abuse drives some to commit suicide. We’re focused on drug prevention.”

Suicide prevention, too. LEAD launched Text-A-Tip in early 2014. The 24/7 crisis hotline initially served middle school and high school students in Lake Forest/Lake Bluff/Knollwood, and everybody knows most middle school and high school students text almost as often as they breathe. Text-A-Tip helps those suffering from depression, substance abuse, peer pressure and bullying issues, among other conditions. How it works: ailing student (or a friend of an ailing student) thumbs a community code and crafts an anonymous text to a number (274637); a state-licensed mental health professional responds to the text no more than a few minutes later.

No other crisis hotline in the country provides such assistance.

Duran oversaw the expansion of Text-A-Tip in Highland Park and Deerfield school districts, in New Trier Township, in McHenry County. Educators from other states have heard about Text-A-Tip’s usefulness (more than 4,400 texts, through 2015) and contacted Duran to help them initiate a similar service.

“Kids today are growing up faster than they need to grow up,” Duran, father of two daughters (ages six and four), says. “There’s a lot of pressure to succeed at the high school level, to get into the right school. Some kids feel that and become depressed. Some resort to drugs and become addicted to them. At LEAD we focus on reverse stigma. I don’t consider drug abuse a dirty condition; drug abusers are people, suffering through a disease, an illness, and they need help. We’re here for them. 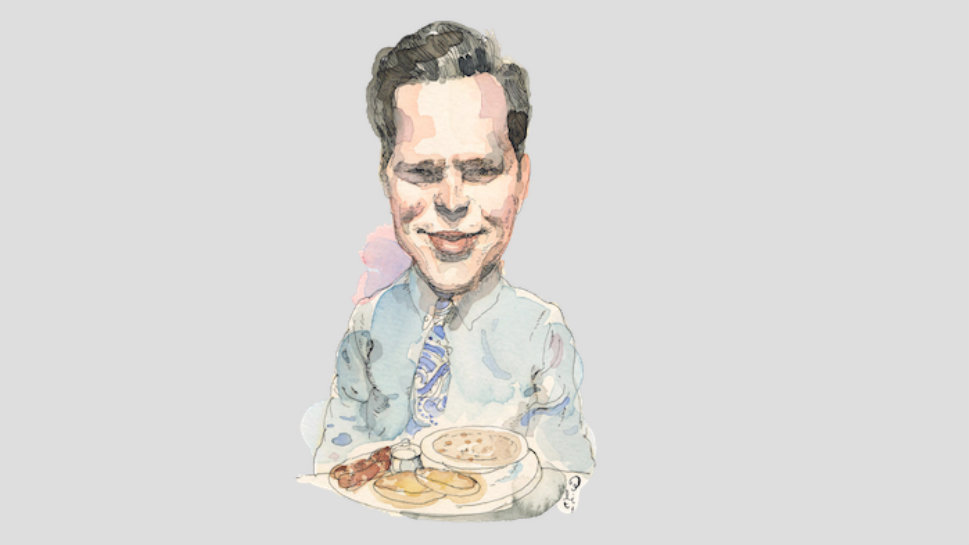 “Happier kids in a community,” he adds, “make that community a healthier one.”

It hits me, at about the time he swallows his ninth spoonful of oatmeal, that Duran was probably that clean-cut boy in high school who got voted “Most Likely to Stay Clean-cut” by his peers. His hair is neat and parted, professional-looking, ready for some big board meeting. Or a wedding. His clothes sport as many wrinkles as those found on a tot’s face. Duran attended Saint Leo University in Florida, majoring in religion and minoring in special education, and wanted to live and work near a big city. He interviewed for jobs near New York and Chicago in the spring of 2001.

His first job, in Chicago: case manager for Misericordia Home North. For more than five years he was a youth minister at Church of St. Mary in Lake Forest. In 2004 Duran founded Lake Forest-based Camp Hope, a five-day recreational and residential summer escape for children, teens and young adults who are challenged by developmental disabilities. Ideal preparatory posts for what he is doing today.

“My grandfather [the late Ed Duran, an engineer] and father [Paul, a former photographer currently in the banking industry] taught me the importance of hard work and resiliency,” says Duran, whose wife, Liz, has taught Chicago Public School and School of St. Mary students. “My grandfather was a family man; family was always No. 1. My father is just like him, quiet, a man who likes to sit back when he’s around his family and soak everything in.”

The topic of conversation shifts to Duran’s role as a parent. He takes it as seriously as he takes his job. He mentions the setting of expectations, the importance of balance in his daughters’ lives. The Durans love to visit Chicago. They travel to Florida at least three times a year. They bond at pools and at beaches.

“I want my children to be nice,” Duran says. “I want them to be gentle, Christian human beings. As a parent I put more emphasis on effort than I do on anything else. One of my daughters completed an art project at school. What mattered to me, more than anything else, was the time she devoted to it, her dedication to it from start to finish. The result was secondary. The beauty of it was secondary.”

Andy Duran certainly appreciated the efforts of his beloved Penguins in the Stanley Cup Final last month. He didn’t mind the result, either: Pittsburgh, in six games.

Visit leadingefforts.org for more information on LEAD. This story was originally published in The North Shore Weekend newspaper.