In the world of late-night talk show hosts, there are few names bigger than David Letterman, Conan O’Brien, or Jimmy Fallon. For more than three decades, this talkative triumvirate ruled the scene as the successive frontmen for NBC’s supremely popular Late Night franchise. When Fallon eventually departed for the bright lights of The Tonight Show, what remained in his wake were, at least in talk show terms, some monumentally large shoes, just waiting for a suitable sort to fill them.

That chosen man was Seth Meyers, one-time head writer of the flagship sketch show Saturday Night Live (SNL) and the heir apparent to a showbiz kingdom that demanded nothing less than success. Meyers took over hosting duties in 2014 and has never looked back.

Meyers was born at Evanston Hospital, and even though he spent most of his formative years in New England, before graduating to the world famous hustle and bustle of New York, he’s never forgotten the city of his birth.

“Evanston still has a really special place in my life, even where I am now,” he told The Daily Northwestern in 2011. “The people that I met there have really helped me get to this point.”

In June, Meyers gave the Northwestern University commencement address and received an honorary degree from his alma mater. And recently, he was quick to bestow the virtues of his home city when asked about how ambitious people are the United States. “You know, ambition exists everywhere, and on every street corner. I think there’s a different way people go about it. Perhaps in the bigger cities it’s more cutthroat, more ruthless. 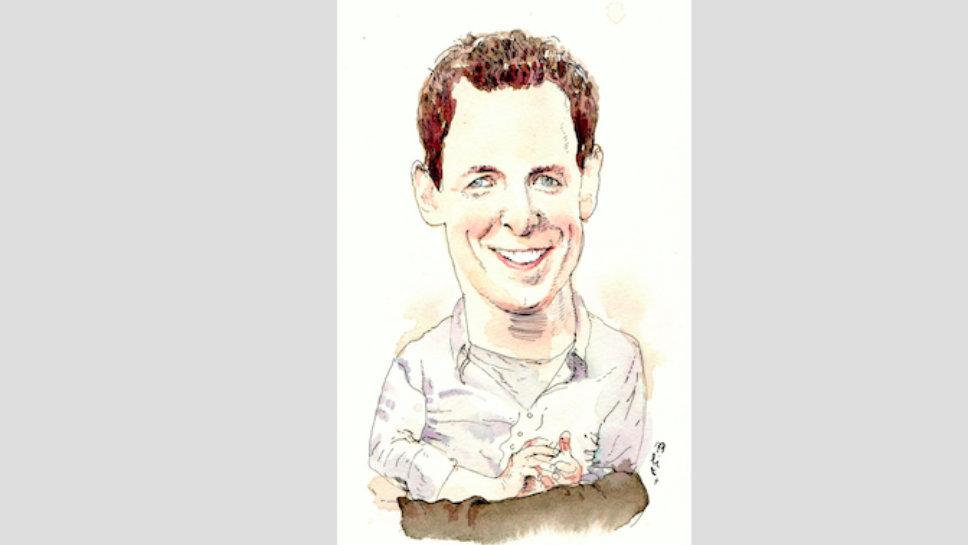 “I think in Evanston there’s a respectful nod to others trying to get on the ladder. I’m not suggesting people are offering others a place in the queue before them, but striving for recognition isn’t quite so driven at the expense of everything else, and that’s really special.”

Illinois often goes uncredited as a state where many of America’s great comedic talents began their lives and careers, and has long provided a fertile hunting ground for Lorne Michaels and his team in the search for the next big thing on Saturday Night Live. Evanston, in particular, can claim SNL alumni Bill Murray, Joan Cusack, and Tim Kazurinsky as its own, and many more of the nation’s most famous comedians are affiliated with the nearby Windy City.

“I moved to New York in 2001,” Meyers explained in an interview alongside long-time friend and former SNL collaborator Amy Poelher, “and the crazy thing about that was the people I watched perform in Chicago—you [Poelher], Horatio Sanz, Tina Fey, Rachel Dratch—it was weird to move to New York and be most excited about being colleagues with people I knew from Chicago.”

For Meyers, the theater bug bit when he returned to his hometown of Evanston when he attended Northwestern University.

“When I first came to school, I pretty much had no plans at all,” he says. “I was initially a radio, TV, and film major and thought that I wanted to be behind the camera, but then I ended up falling in love with improv. I would go downtown and take classes at Improv Olympic, and once I got started, I knew it would be silly for me to be behind the camera when I found I loved performing so much.”

Fortunately for Meyers, the perfect vehicle for honing his theatrical urges was waiting for him at Northwestern—The Mee-Ow Show, which he told NBC in 2009 was “absolutely the reason I am in comedy today.” The troupe first took to the stage in 1974, and has since become a staple for the university’s theater and comedy scene. In joining Mee-Ow, the young Meyers could count SNL stars such as Ana Gasteyer and Seinfeld’s Julia Louis-Dreyfus amongst his predecessors.

“It was so much fun,” reminisces Meyers. “The guys that did it the years before me were sort of my heroes and I didn’t think I would get a chance to be in the show, but then I joined, and the year I did it was amazing. Being on stage in front of people— well, it was like a drug. That sort of sold it for me, and I knew it was what I wanted to keep doing.”

While he would go on to perform in the various skits and sketches that made SNL a household name—most notably as the co-anchor to Poelher in the “Weekend Update” segment in a prophetic pastiche of his future role as the Late Night host—it was in a supporting role that enabled Meyers to eventually make his mark.

While he has been known to tackle impersonations from time to time, Meyers told Vogue that the start of his SNL career was mired by a sense that “a terrible mistake had been made” and he was unfit to call his fellow comedic co-workers equals.

Fast forward just four years, and Meyers was being appointed co-head writer of the show with Anthony Steele and Tina Fey—a position he went on to hold single-handedly after Fey’s departure in 2006, and which set the groundwork for his career as a hugely successful comedy writer. For him, the pen was as mighty as the sketch.

“I’m grateful for that. I can be under the bleachers with Lorne [Michaels] while someone else says something I wrote and feel exactly as good as I could have felt if I was out there saying it.”

This is the man who was behind the Sarah Palin sketch that marked Fey’s hugely successful return to the show, the writer who would go on to be the second longest serving member of the SNL cast in its history. Despite accepting his acting shortcomings, the ensemble nature of SNL allowed Meyers to excel behind the camera after all.

“One of the great things about working at SNL is that you’re surrounded by people with all these different talents. I did have those dreams and then, you know, people like Andy [Samberg], Bill [Hader], and Jason [Sudeikis] showed up and they started doing their thing. And I started thinking, ‘Oh, these guys are better actors than I am.’ When this show came up, I said, ‘Okay, this is the kind of job that I think I could do.’”

Recently, Meyers has begun to develop a reputation for more in-depth political patter, leading to some areas of the media comparing him to the now-retired Jon Stewart of The Daily Show fame.

Having said that, the decision to swap the traditional standing monologue that opened the show to a format that saw Meyers seated at a desk in an echo of his former stint with Poelher on SNL, coincided with Stewart’s decision to hand over the reins of The Daily Show in 2015.

“The longer we’ve done this show, the more we’ve tried to focus on politics,” Meyers says. “Certainly, as we enter an election year, politics is going to provide more for us to talk about. The timing is more coincidence… but again, I sat for a long time at my last job. It’s not like this is something I’m doing for the first time. It was nice yesterday. When you do something new you feel some nerves, but once I started doing it, it was muscle memory reminding me that it had been my delivery system of choice for a very long time.”

The “stuff that does best” on Late Night, Meyers adds, “always has a point of view” – something more commonly associated to the style encapsulated by Cronkite, Letterman, and Stewart. “The audience respects knowing what hosts believe. They’re not looking for someone who’s inscrutable or a puzzle, so we’re happy to let people know when we’re upset or angry about something or feel passionately one way or the other. That always seems to play better, and that is one of the many legacies of The Daily Show. One thing you worry about is if somebody who’s in line with your politics makes you angry, you don’t ignore it because it’s in line with your politics. You also talk about it. You just don’t want to let anybody off

Meyer’s turn as the face of Late Night is going steady, with an average audience last year of 1.5 million. Like Meyer’s SNL career, his talk show tenure has blossomed with time, quietly establishing itself in his own image as a man who is undeniably talented and seemingly devoid of ego. Following talk show stalwarts like Letterman, Conan, and Fallon is a daunting enough task and, two years in, Meyers is doing much more than just keeping his head above water—he’s looking forward to many more years to come. Talk show hosting is a career defining profession—as Lorne Michaels once told Meyers, “there’s no job after it” —but to return to the initial point, although Meyers is angling to cement his place in a bona fide American tradition, he’ll still always be an Evanston boy at heart.