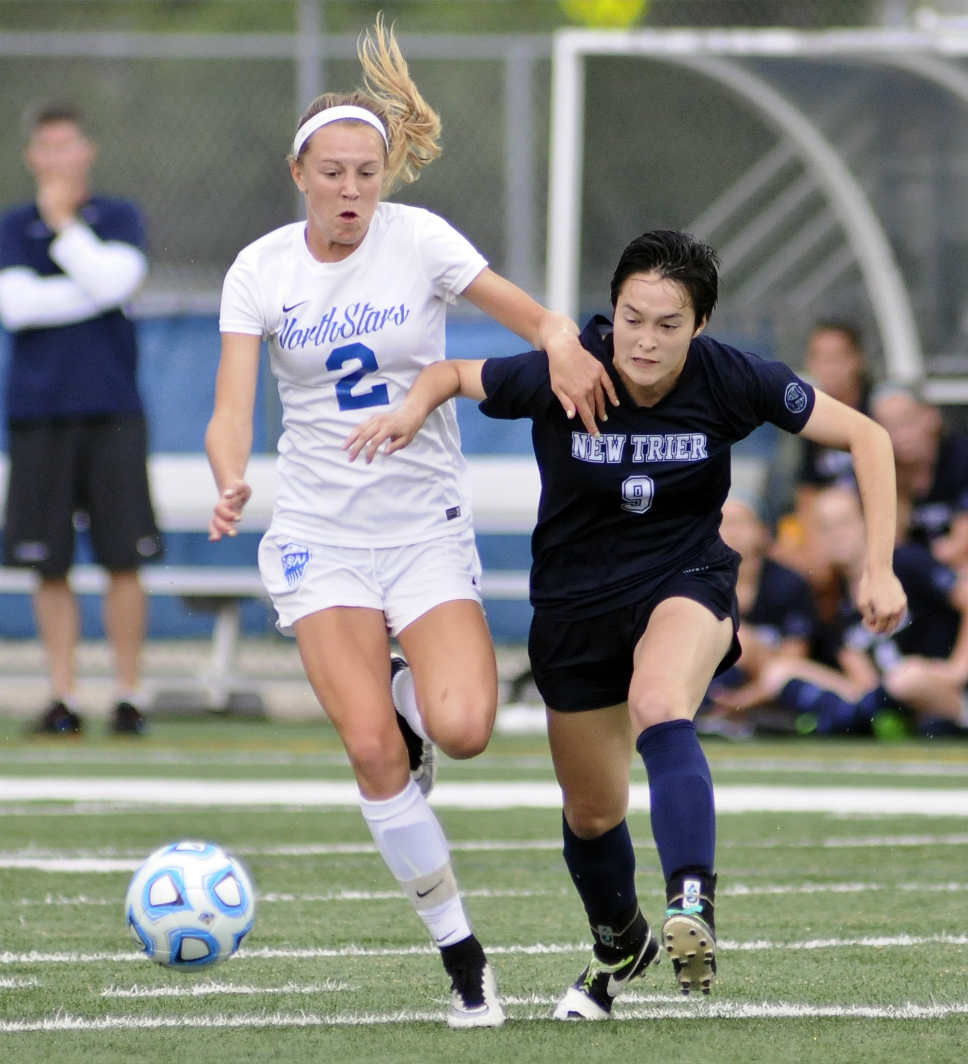 While performing in musical theater, recent New Trier graduate Flower Edington lived by the mantra “the show must go on,” regardless of missed cues, flubbed lines or off-key notes.

On the soccer field, the show also goes on. However, if, like Edington in the last few months, you suffer a broken arm, require staples in your head to close a wound or are experiencing dizziness after colliding with a teammate, you don’t necessarily go on with it.

“That’s the stuff [injuries] I have to accept, if I’m trying to put myself out there and win the ball out of the air,” said Edingon, whose given name is Hana, Japanese for Flower, a longtime nickname she fully adopted in middle school. Flower’s mother Tomo is Japanese.

Edington’s game, full of athleticism, energy, grit, craftiness and intelligence, was an important component in New Trier’s success this past spring, as the Trevians captured a third straight Class 3A state title with a 4-0 win over Collinsville on June 4.

“When I watch [Edington] do her moves up the field … she even fools me,” New Trier junior defender Sam Urban said. “Her hard work is noticed by coaches, players and fans. My younger sister [who is in seventh grade] once told me Flower was her favorite player.”

The versatile Edington was usually the first Trevian off the bench, often playing midfield, but also playing up top and occasionally in the back. She finished the season with three goals and one assist, and had six goals and five assists in her two-year varsity career. But New Trier head coach Jim Burnside said Edington’s impact went well beyond stats.

“She was a wildcard for us, a difference maker in the playoff run and for the entire [2016] season,” Burnside said. “She’s a jack of all trades, and I would say master of all of those.

“She understands the game and is usually in the right place at the right time, getting to spots as the play is developing rather than just reacting.”

He continued: “[Edington] is so dependable. Two years ago, I didn’t think I would be saying these things. It’s a true credit to what she’s invested in this program and in her soccer abilities over the last two years.”

Shortly after Edington’s sophomore season, she and Burnside sat down for a discussion about her soccer career and goals. A member of the school’s musical theater department, Edington was performing in musicals and trying to keep up with club and high school soccer commitments.

Burnside said he appreciated and admired Edington’s musical talent, but he did not believe balancing both activities would allow her to maximize her obvious potential on the soccer field. He described the meeting as an adult discussion rather than an ultimatum.

Edington told Burnside she was “fully checked-in” to the team and the sport. She still performed in the school’s production of “Fiddler on the Roof” as a junior. But prior to her senior year, she joined FC United, one of the area’s top girl’s soccer clubs, though her fall season was cut short by a broken arm. She also decided to skip this year’s musical.

While some local high school soccer programs might bend over backward to allow a player of Edington’s talent to do theater and sports, New Trier isn’t just any program.

“If I had to choose between this program and another program where I could do that, I would choose this program, hands down,” Edington said. “I’d rather be on this strong team than be in a mediocre soccer program. I was willing to give up that [musical theater] side to be part of this program.”

Edington’s increased commitment to the sport included exploring her collegiate soccer options. Last summer, she caught the eye of Illinois Wesleyan coaches during an ID camp at the Bloomington school. Shortly thereafter she agreed to play for the Division III Titans.

On the field, Edington improved several skills, including her ability to head the ball.

After the graduation of New Trier’s talented forward Maggie Armstrong in 2015, Burnside was looking for players who could win aerial battles at both ends of the field. So, the 5-foot-5 Edington made herself a threat in the air.

Unfortunately, doing so also led to a few collisions, one of which resulted in a lot of blood and an early end to Edington’s Senior Night game on May 9, another to dizziness and a premature end to her state championship game.

Also on Senior Night, Edington’s two worlds collided when she surprised her teammates by singing the National Anthem before the game.

“It was cool knowing that it wasn’t going to be all the theater and choir kids, that it was my own teammates and lot of them haven’t heard me sing for real. They’ve heard me on the bus, but not in a performance kind of way,” Edington said. “It was amazing to be able to bring out that side of me. I really loved that experience.”