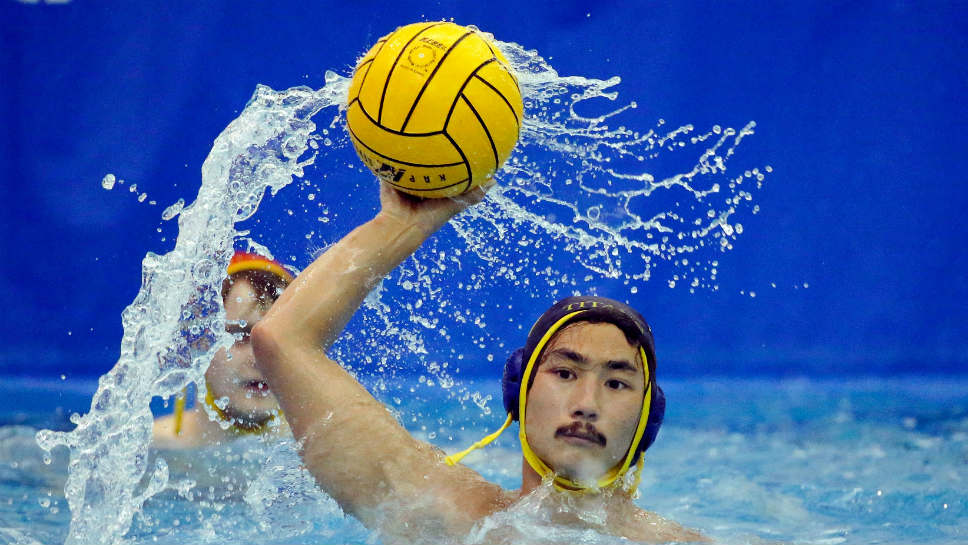 Players from opposing water polo teams noticed it right away in 2014. It was impossible to miss, Richard Poma’s mustache. It was dark and fairly thick, neatly trimmed. Debonair. Clark Gable grew one almost just like it for his movie roles in the 1930s and 1940s and 1950s. Leading ladies kissed part of it; envious men wanted to sport a Clark Gable mustache.

Poma was a Glenbrook South High School freshman water polo player in ’14, his ’stache a two-year-old. Poma, no kidding, had a visible mustache as a seventh-grader. How many times since the start of Poma’s freshman season, before a water polo game, has an opposing player looked at Poma and wondered, Why is a Glenbrook South coach in the water, tossing the ball around to his players?

“Players from other schools were in awe that a freshman was able to grow a full mustache,” recalls recent Glenbrook South graduate Peter Dales, the Titans’ leading scorer in 2016 and an illpolo.com all-stater (First Team).

It is more than just facial hair today, much more. It is, according to Titans water polo coach David Lieberman, “Richard’s trademark.”

If he ever shaves it off, and don’t count on that, he’d become “the new kid in town,” even to his closest friends, and a stranger to most of his family members. Poma will be a mustachioed senior in the fall and a mustachioed, returning all-stater (Fourth Team) next spring. The 5-foot-9, 150-pounder ranked second to Dales in virtually every significant statistical category this past spring, including goals (65), assists (38) and steals (50).

The growth above Poma’s upper lip had nothing to do with those numbers.

“Richard has some of the fastest hands I’ve ever seen,” Lieberman says. “He’s a smart player, too, very smart and experienced. He’s pretty level-headed, always in the moment. Never lets anything get to him. What I really like about him is his all-around ability. He can play center; he can guard center. And his shot, it’s crazy … crazy fast.”

Poma stopped polo shots, as a grade-school goalie, for three years before a club coach watched him shoot one day and figured a Poma in the field would boost the team’s offense. Good move, Coach. Poma was in the eighth grade then. He and his family had moved from Chicago to Glenview.

“I like that water polo is a physical game,” says Poma, adding his mother, Margaret, had urged him to try the sport. “I also like the movement of the sport, the high energy, wrestling others for position, getting to rebounds, tipping shots in. I like to push and push and push, go for steals.”

Perhaps his best goal of the ’16 season — South finished 27-6, falling 8-7 to New Trier in a sectional final — came midway through the fourth quarter of a 5-3 defeat of visiting Loyola Academy in the regular season. The Titans’ offense had reached a stagnant level before Dales and Poma worked some magic in chlorination. Dales had the ball in his left hand when Poma freed himself from the Rambler guarding him. Dales lofted a backdoor pass, Poma having elevated before the delivery left Dales’ hand. Poma snagged the ball and slammed it past LA’s goalkeeper. It looked like the two had been working on the sneaky play for quite a while.

“I’m excited to see where he takes the team next year.”

This winter Poma intends to do something for the first time: go out for the Titans’ varsity swim team. Swim lots and lots of laps and build stamina along the way. Compete and race hard and stay sharp, without a ball. That, all of that, should turn him into another kind of water polo player in 2017, a faster and stronger water polo player. That is his plan. (Flashback: Poma showed up for the first day of water polo tryouts at Glenbrook South in 2014 and almost didn’t survive a session that was relatively easy for swim team members and grueling for a polo-only freshman like Poma “I was terrible,” he recalls. “I was dying at the end of that day.”)

“I want to take my game to the next level,” Poma says.

It might be there already. Poma headed to California in early June to spend weeks training and playing with an 18-and-under water polo club based in Corona del Mar. Ontario, California, is the home of the University of La Verne, home of the Leopards. Poma has looked into the water polo program there.

Students and faculty members and administrators and coaches at Glenbrook South get to look at the Richard Poma mustache for one more school year. It almost disappeared, temporarily, in May. Had Glenbrook South defeated New Trier in that sectional final, The ’Stache would have hit the sink at Poma’s home. New Trier won; Poma’s signature look stuck around.

“People know me,” Poma says, “because of my mustache.”

Not exactly. There is more depth to him than that. Considerably more. He is a force in water polo games, a good teammate, a driven athlete. Out of the water, his cap off and his mustache dry, he is a teen bent on soaking up all there is to life as a teen.

“Richard is funny, always joking,” Dales says. “He’s a nice guy, a good guy to be around. And he’s fun. It was nice having a teammate like Richard. You want a teammate like Richard around, and not just because he played with intensity and made us laugh when we weren’t playing. He helped our team stay together. He knew what to say to settle his teammates down.”