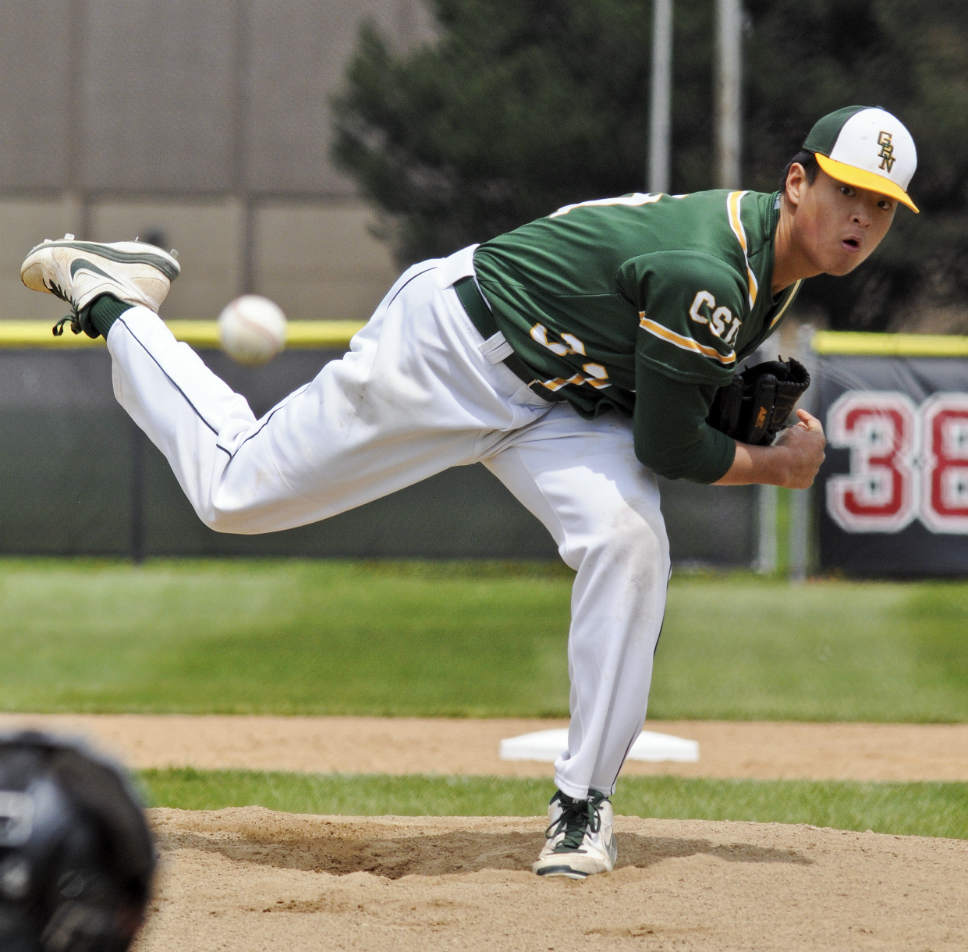 Michael Oh fires to plate in a game against Niles West this spring. PHOTOGRAPHY BY GEORGE PFOERTNER

Every morning, it’s the same. Michael Oh starts each day with the same breakfast: three eggs over easy topped with Tabasco sauce — “Gotta have the Tabasco sauce,” he says — and a handful of walnuts.

He’s in a rut, right? Actually, it’s the exact opposite.

Routines are crucial to the recent Glenbrook North graduate. They’re as important as getting a first-pitch curveball over for a strike or painting the corner with a tailing fastball.

“I don’t want breakfast to be an issue,” the pitcher, eyes beaming, says.

“I started this in late August,” adds the 6-foot-4, 215-pound right-hander, who will pitch for Creighton University. “I’ve taken nutrition and my workout plan very seriously.”

“Clean” eating is just as important as a repeatable pitching motion, sound mechanics or a consistent bullpen session — especially for a pitcher of Oh’s stature.

But don’t miss the over easy part.

He’s likeable, personable and oh so easygoing — as long as he’s not pitching in innings 1 through 7.

“He’s a great teammate,” his catcher, Hikaru Ozone, says. “Nice to everyone.”

“His character is phenomenal,” his coach, GBN’s Dominic Savino, adds. “And that’s just a by-product of how he’s been raised by his parents [Harrison and Young Oh]. He’s been raised the right way, and that comes through on and off the field.”

But easy only goes so far. Oh is a different guy when he takes the hill. He doesn’t like to give in to hitters — and usually doesn’t.

“He’s a competitor,” says Savino. “He brings the right approach to the game, and he’s able to flip the switch. He can go from being a mild-mannered [teen] to a ferocious competitor just like that.

“He has high expectations for himself, and that’s why he performs at such a high level,” the coach adds.

Opposing hitters usually find him not so pleasant and gracious. With his deep repertoire — four-seam fastball, two-seam fastball, curve and a work-in-progress change-up — Oh is not easy to solve.

“He’s got a great posture on the mound,” says Ozone, who was backstop for the past two seasons. “He can throw all of his pitches for strikes.”

And that trademark 12-6 curveball? It can be deeply troubling — to opposing hitters.

“It’s hard to hit,” Ozone says. “He can locate it down at the knees all day long.”

The guy with the cool Twitter handle (@datpanda42) — he’s of Korean descent — finished his senior year 8-0 with a ridiculously low earned run average: 0.57.

Despite missing three weeks with a hamstring strain, Oh recorded 73 strikeouts in 48 2/3 innings, allowing 34 hits and 16 walks. He was named the Most Valuable Pitcher in the North Division of the Central Suburban League.

And, talk about being repeatable. He stacked those numbers on top of a highly successful neon-lit junior season: 8-2 record, 1.73 ERA with only 43 hits allowed in 52 2/3 innings to go along with 69 Ks and 16 base on balls.

“Here’s the thing about Michael,” says Savino. “Not only does he not give up earned runs. He doesn’t give up runs, period. And that makes his 0.57 ERA even more impressive. The scorebook doesn’t care if it’s an earned run or not. In Central Suburban League play this spring, he gave up a total of three runs [24 innings]. Now that’s crazy.”

Offer Oh a challenge, and he’s all over it. The right-hander proved that he pitches really well, when he’s got something on the line. On March 22, in a home game against Stevenson — the team that eliminated GBN in the 2015 state playoffs in controversial fashion — Oh had his fastball humming.

And his hammer — 12-6 curveball — had alligator-like bite. He struck out eight Patriots in the first three innings. Tabbed as The Revenge Game, he wound up with 15 Ks in the 3-2 victory.

“He knows how to pitch,” says Savino. “And that’s why he’s going to be successful [at the next level].”

Oh’s love for country and western music also figures to work in his favor during his time as a Creighton Bluejay. Here’s a guess. He won’t have any trouble finding a country music station in Omaha, Nebraska.

He got turned on to the Zac Brown Band, when he was playing 12U baseball for the Glenview Blaze. He couldn’t get that song, “Chicken Fried”, out of his head. Not then. Not now. Go ahead and turn “the radio up.”

“It just kept expanding from there,” says Oh. “Now, I love all country music.”

Harrison Oh, father of the pitcher, has been a fixture at Glenbrook North baseball games for the past four seasons. And he’s not just any dad.

Like his son, Harrison Oh is likeable and personable.

Like his son, Harrison Oh is unique and unobtrusive.

Harrison has the book on Michael.

Check out the notebook that Harrison brings to Michael’s every start. Every pitch is charted and tracked. And many of those offerings are caught on radar — by a Ball Coach, a handheld pocket radar device.

The pitcher thinks about that well-worn notebook and tenderly nods.

“My dad really loves the game of baseball,” he says.

Michael Oh might be driven to play baseball, but he’s not without other athletic skills.

Last Labor Day, he and his buddy, Dean Weiss, played a round of golf at the nine-hole course at Sportsman’s Country Club. On the fourth hole, Oh sent a ball into orbit. He hit his drive so far that he didn’t see it fall.

“It passed over the green [355 yards away] and landed in the rough,” recalls Oh.

He eventually found it.

And then, like a surveyor at a road construction site, Oh pulled out his trusty golf range finder to get the exact distance. It went a cool 386 yards.

Last June, Oh, who played two summers for Top Tier, took part in the 2015 Chicagoland Classic Showcase at the University of Illinois-Chicago. That’s where he got a power boost. That’s where he was able to turn even more oohs into ahhs.

It was on that stage — the mound at Curtis Granderson Stadium — that Dusty Napoleon, currently an assistant coach at Northwestern University, told a sportswriter that Michael Oh was special.

Napoleon’s exact phrase: “Michael Oh is getting Division I buzz.”

Napoleon, an ex-minor leaguer in the Oakland As’ organization and a former star at New Trier while playing for his dad, Mike, loved Oh’s stuff. Loved his demeanor. And he wasn’t the only one.

Several weeks later, a member of the coaching staff at Creighton contacted Oh. All of a sudden, the cool and laid-back hurler was not so cool and laid back. The pitcher with plenty of giddyup became almost giddy.

“Once they called, I took it [offer] right away,” Oh, eyes beaming brightly again, says.

In his final mound appearance with the Spartans (25-10) this past spring, a 3-0 regional semifinal win over Buffalo Grove, Oh turned in one of his patented outings.

It was a rare — and taxing — two-part performance for him. Due to rain, the game was played over two days. He started and worked one full inning on May 24. Then, he re-started and pitched into the sixth inning on May 25.

The results? Pretty much the same as ever. Gritty and determined, Oh scattered seven hits and found a way to work out of a couple of tricky innings. He ended up with seven strikeouts (five on called third strikes).

Best of all, before getting the hook after close to 100 pitches, Oh still had plenty of hop on his fastball (83-86 range).

“I just had to stay locked in. It was more mental than anything else,” says Oh. “I did everything the same as I did the day before — just to make sure my head was straight.

“I stuck to my routine.” 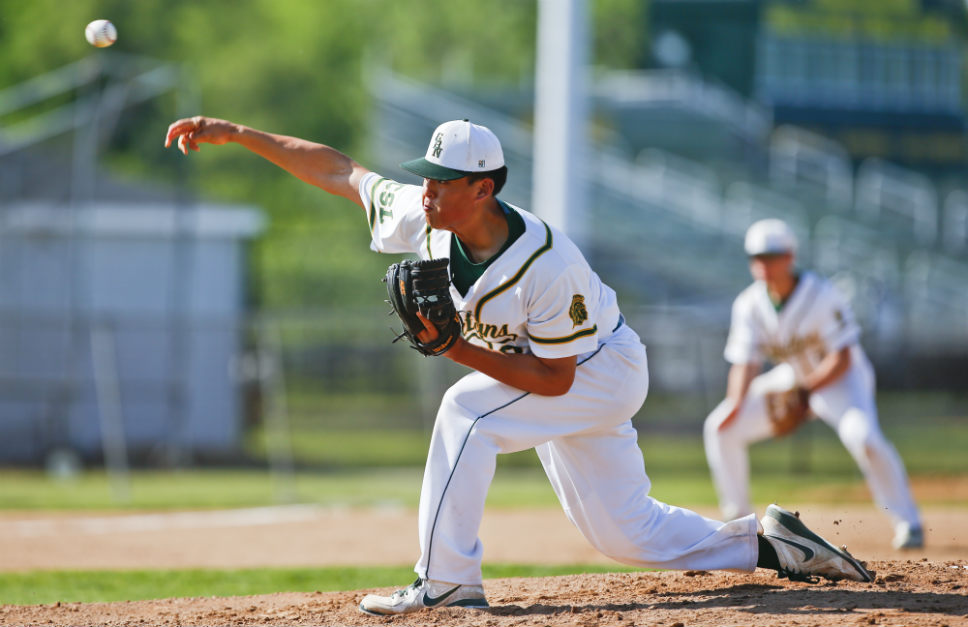