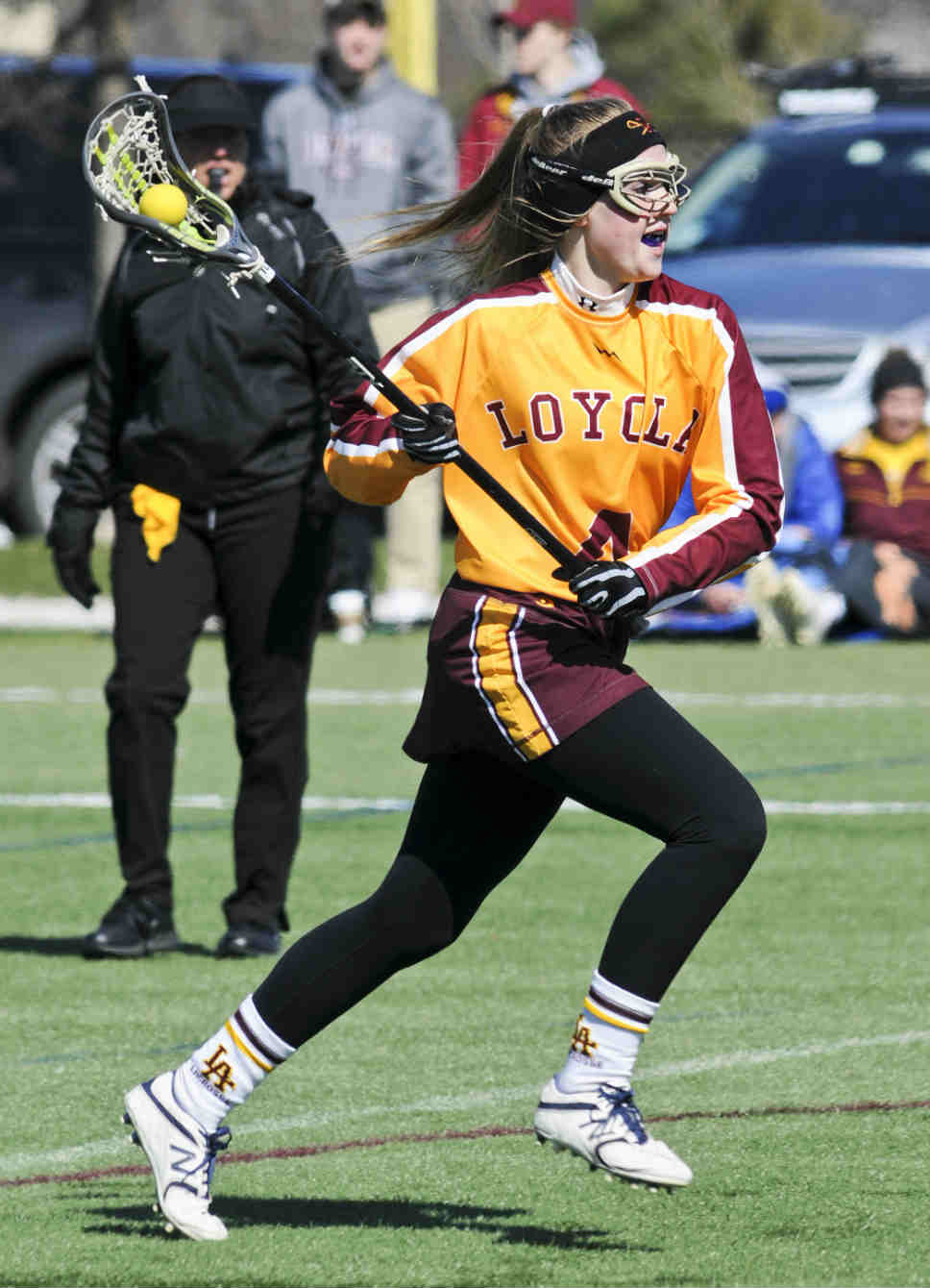 Loyola Academy’s Tessa Waters will be taking her game to the next level. She had 43 goals and 34 assists for the Ramblers this past spring. PHOTOGRAPHY BY George Pfoertner

CarolLynn Ellison had seen enough of a sixth-grader from Skokie named Tessa Waters. Enough to know Waters had gobs of promise as a lacrosse player. This was six years ago. Ellison was director of officials at Lakeshore Lacrosse, an organization dedicated to the education and enjoyment of women’s lacrosse in Chicagoland. Waters was a Lakeshore Lacrosse player.

Waters lived in a high school district that did not offer girls lacrosse to its students. Ellison was thinking ahead when she called Loyola Academy girls lacrosse coach John Dwyer and touted Waters. Waters’ talent, beginning in three years, deserved to be displayed in high school lacrosse games. The essence of Ellison’s pitch to Dwyer: You have to see this youngster. Test this Tessa against some of the best players.

“I remember going up to Coach Dwyer on the first day of camp and introducing myself,” Waters, now a recent Loyola Academy graduate, recalls. “He knew who I was; I couldn’t believe that. He first put me in a group of girls my age. He wanted to see how I’d do in that group.”

Jeff Dees, Department Chair of Social Studies at Loyola Academy and a member of Dwyer’s coaching staff for the past 14 seasons, was there on the day Waters ran around and passed the ball and shot the ball in front of Loyola Academy eyes for the first time.

“No fear,” Dees says. “She had no fear. She got after it, this sixth-grader. Tessa was tenacious. We knew, right away, how talented she was, how special she was.”

“Lacrosse was only a part of why she went to Loyola,” Dwyer, coach of the eight-time reigning state champion Ramblers, says. “I look at Tessa, and I see a Division-I caliber lacrosse player who will dominate, dominate, at Vassar. The thing that really impressed me, though, was how she embraced all that Loyola offered her and then flourished at the school. In academics, through all of her activities, in lacrosse … in everything. It was amazing, the process that brought her to Loyola.

“It was wonderful,” he adds, “what she did with her opportunities at Loyola.”

“To be the best practice player I could be and prepare the starters for each game,” Waters says. “That’s mainly why I was on the team then. And I was there to give my all, to support everybody, along the sideline during games.”

Waters scored a combined 12 goals in her first two seasons and nearly tripled that total in her junior season, finishing with 33 goals to go with seven assists. Her biggest goal of the 2015 season? Easy. It came in the Illinois High School Women’s Lacrosse Association (IHSWLA) state championship game against Hinsdale Central. The game was tied, 4-4. Waters got fouled and scored on the ensuing eight-meter shot, bouncing a shot past the Red Devils’ goalkeeper. It was the winning goal in a 6-4 victory, LA’s seventh straight state title.

Loyola Academy visited Hinsdale Central this past spring. Each squad scored 10 goals in regulation. Loyola Academy won 11-10 in overtime. Guess who scored the clincher? Waters, Tessa. T-Dub. LA senior-to-be Katie Enrietto, a middie and an IHSWLA all-stater, had the ball when a pair of Red Devils charged toward her. A patient Enrietto fed the ball to Waters, who bounced in another clincher. It was one of her 43 goals in ’16. She had delivered an assist (one of 34 in ’16) earlier in the game.

“Tessa was a great asset for us, all over the field,” Enrietto says. “She made big plays for us, was always a team player, and she kept getting better and better and better. She was like a big sister to me, always there to listen, to help.”

In eight of Waters’ last nine games as a Rambler, beginning with LA’s 15-10 defeat of Glenbrook South on May 10, Waters recorded exactly three points (combination of goals and assists). Waters finished with two goals and an assist in LA’s 18-10 win over New Trier in the state title game on June 3.

“Tessa had a knack for scoring big goals, and she worked tirelessly to get better,” Dwyer says. “Her last two seasons … very, very productive. She has quick feet, and she’s hard to defend, in part because of her shot. It’s slightly different, highly effective. She shoots from a different angle than most others, from a different plane, flatter, and it enables her to get more velocity on her shots.”

She was highly effective in classrooms, too. She was a US Lacrosse Academic All-American last year and this year. She found time to commit to a number of LA activities and service projects, notably the Fridays she spent after school at Wilmette-based Our Place, which supports teens and adults with developmental disabilities. A male there would always light up and throw his arms up as soon as he saw Waters. It was his signature greeting. He’d sing. He’d make Waters sing with him.

“That was the best, seeing him happy,” Waters says. “I got excited one day, really excited, and then I laughed pretty loudly. He imitated me, mocked me a little. Hilarious. I found that hilarious. I was fine with that, because people do that when they’re around good friends.”

Dees, the JV lacrosse coach at Loyola Academy, admired Waters’ performances on lacrosse fields. It was hard to top the sight of Waters, the ball in her stick’s webbing, dropping her stick and whipping a sidearm shot past a stunned goalkeeper. He’ll remember the on-field moments. He’ll remember others, too, moments not involving a stick or a ball.

“You can talk to her about anything … politics, current events, pick a subject,” Dees says. “Tessa is more worldly than most others her age. There’s more to her than her lacrosse life. I’d see her in the cafeteria, surrounded by students and interacting with all of them, lacrosse teammates and science classmates and friends. She has this way of connecting with people, bringing people together.”