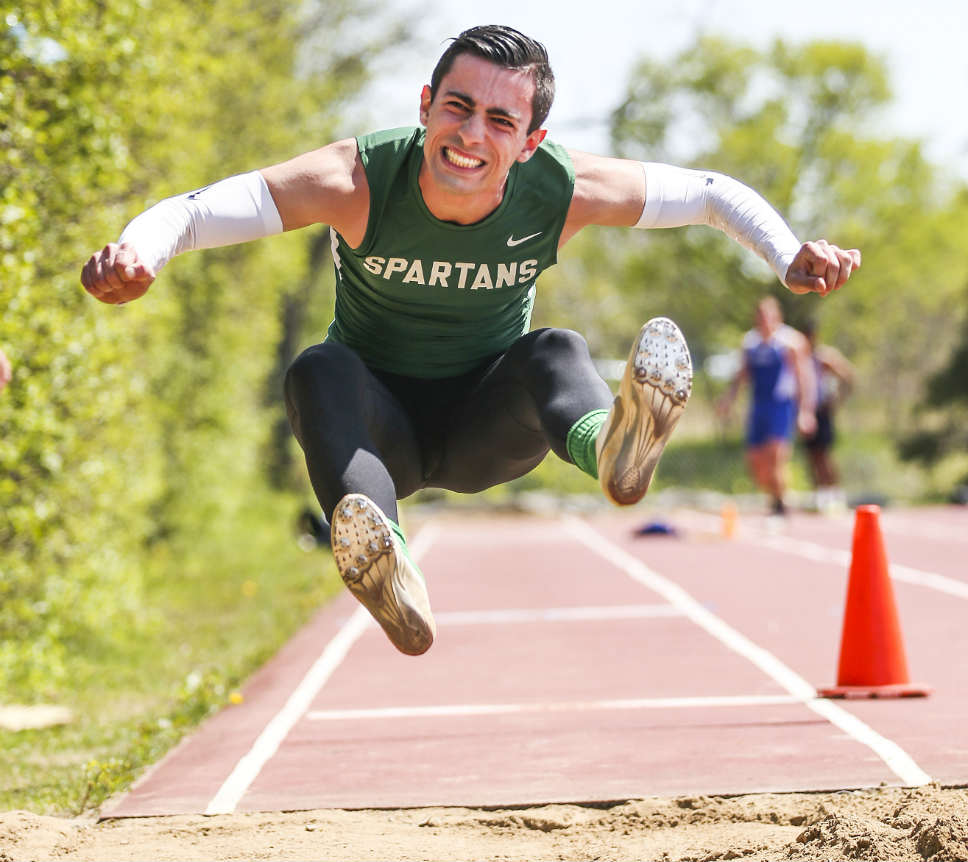 Winning wince: Glenbrook North’s Michael Papper, seen here at the Loyola Sectional in May, finished his career with a pair all-state performances in the long jump. PHOTOGRAPHY BY JOEL LERNER

Recent Glenbrook North graduate Michael Papper went from a track athlete who thought he knew it all to one who actually knows more than many.

Papper, who currently is looking to compete collegiately at Loyola-Chicago or Southern Illinois-Edwardsville, closed out his career last month by finishing eighth in the long jump (22-2 ½) at the IHSA Class 3A state meet in Charleston (May 26-28), which was his second straight eighth-place finish.

Although Papper was disappointed he was not able to improve on his 2015 finish, or top his career-best jump of 23-0 ½ from the previous week’s Loyola Sectional, he did leave quite a legacy at Glenbrook North. He was the first long jumper in program history to reach state, earn all-state and repeat as an all-stater.

“He’s the best long jumper I’ve ever coached, the best I’ve been a part of,” said Scott Lasky, who has been the Spartans’ head coach for five years and part of the program for nine.

The latter half of Papper’s career certainly was in stark contrast to the beginning, when Lasky was forced to cut the talented but formerly enigmatic athlete midway through his freshman season.

“His freshman year he was … what is the word? Whatever the nicer version of arrogant is,” Lasky said. “He thought he knew everything and didn’t want to do what the coaches said. He chose not to do our workouts, and he missed practices. Or, he’d get hurt and then go play club soccer. At one point, he just had three strikes against him and after the indoor season, we let him go.”

Papper, who returned to the team as a sophomore, said some of the issues he had freshman year were related to the program’s training methods, which he thought focused too much on volume and not enough on speed. He also admitted he was young and viewed himself as a soccer player who simply was dabbling in track and field.

“It’s crazy, looking back on it,” Papper said about his high school career. “I (recently) asked some of the guys who were seniors then: ‘Would you ever think I would do what I did?’ And they were like ‘Zero chance.’ It’s just that was God’s plan for me, I guess.”

Papper continued: “For me, after awhile, I matured, gained respect for the coaches and began to care about the sport and put in a lot of dedication and effort.”

That dedication and effort went into training, in and out of season. Soon, Papper also started educating himself about different ways to train and how best to eat. Over time, he began to recognize he had the potential to compete in track and field in college.

After reaching state as a junior, Papper said he decided to take his commitment to the sport to a whole new level.

Papper has worked with a personal trainer and a nutritionist, regularly sees a chiropractor and attended a track coaching clinic, where he was the only teenager. He also reached out to several prominent track coaches in the Chicagoland area, and he began visiting with them in order to learn secrets to getting faster and jumping better.

Papper, who also reached state in the 800 relay this spring, has become so knowledgeable about training methods, that before his senior season, he sat down with Glenbrook North coaches in order to explain what he had learned. The coaches were not only happy to listen, but Papper said they also made some alterations to their own practice routines.

Lasky said: “Coming into (Papper’s) senior year, you could tell this was what he wanted to do. Soccer had been his main sport, but [though he still played varsity soccer in the fall] it became second fiddle. He began to research and talk to other coaches to help us pull information from what they’re doing. He helped our program just evolve a little bit more.”

Papper’s search for knowledge has not simply been about improving his own results either. He has been perfectly willing to share his findings with teammates and even some competitors from other teams.

“Everybody he comes in contact with, they know he’s serious about the sport, and he’s willing to help by offering tips and trying to get everyone better,” said Glenbrook North senior-to-be TJ Weinzimmer, a high jumper and triple jumper.

Weinzimmer added: “[Papper] is known as the kid who really knows everything when it comes to speed and just really track in general. If the coaches even take his word on a few things, you know he knows his stuff.”