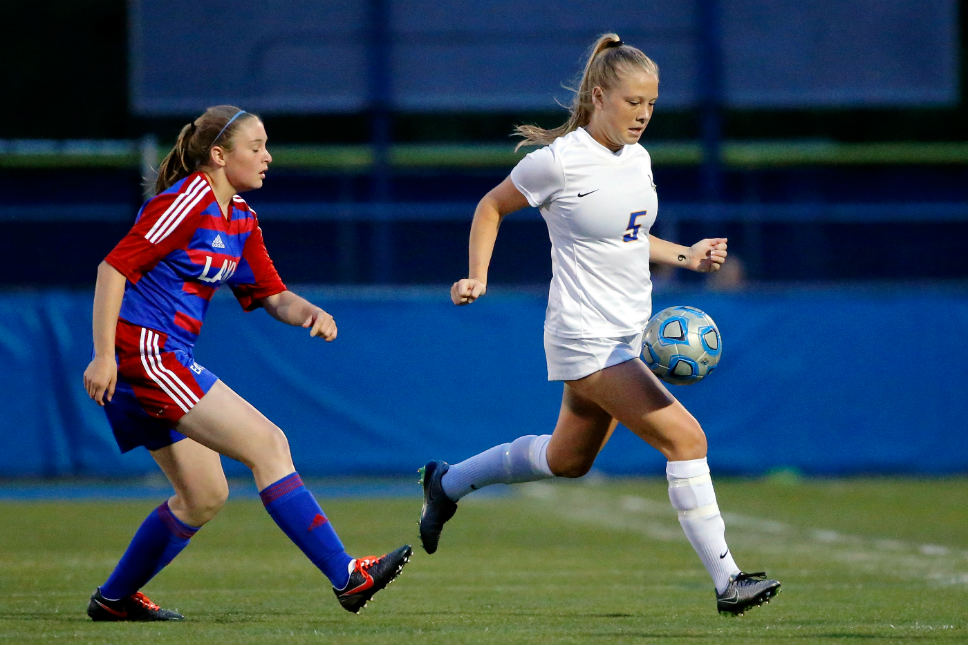 Paige Bourne of the Scouts advances the ball during postseason play. She finished her career with a career school record 61 assists. PHOTOGRAPHY BY JON DURR

Paige Bourne will always have June 7, 2014. The recent Lake Forest High School graduate kicked a soccer ball on the turf at North Central College in Naperville on that day and instantly became the prep version of Brandi Chastain. You remember Brandi Chastain. She was the United States women’s soccer player who booted the game-winning penalty shootout kick against China in the FIFA Women’s World Cup final in 1999.

Lake Forest High School’s girls soccer team and Normal Community West High School’s squad had each scored a goal in regulation in the Class 2A girls state soccer championship final more than two years ago. They played an overtime session. Nobody scored. They played another overtime session. Nobody scored. Penalty kicks would have to break the stalemate. Normal West made its first PK, missed its next two, made its fourth. Lake Forest made its first PK, missed its second, made its next two. Bourne, a sophomore, set up to take the Scouts’ fifth PK.

A miss would extend the PK session. A conversion would clinch the first state championship in program history.

“I had never seen Paige in a high-pressure situation,” one of Paige’s older brothers, Tyler Bourne (LFHS, ’06), recalls. “She appeared calm.”

The ball rocketed off Bourne’s right foot and disrupted twine behind Normal West’s goalkeeper. Goal, no sweat, match. Bourne, arms raised, was no longer calm, screaming jubilantly and turning to start her sprint toward ecstatic teammates.

“Paige had the biggest smile going, pure joy, as she joined the girls to celebrate, as the girls fell all over each other,” Scouts soccer coach Ty Stuckslager, smiling at the memory, says. “What a moment, what a scene. There was pressure there, and a sophomore handled it well for us. Every season we keep track of how many PKs our kids make in practice. Paige was confident every time she took a PK in practice, automatic.”

It is May 20, 2016, another memorable day in the soccer career of Purdue University-bound Paige Bourne, the youngest of Malcolm and Mindy’s five children, the one wearing jersey No. 5 for the Scouts. The 5-foot-7 senior midfielder and tri-captain scores a goal in the final minute of the first half of a Class 2A regional final against visiting Lakes Community High School. It breaks a 0-0 match. It also triggers a collective cheer from a pair of young women standing near the fence surrounding the field.

“That’s my sister!” Megan Bourne (LFHS, ’09) and Amanda Bourne (LFHS, ’14), another member of that state title team, shout to passersby and spectators sitting in the stands.

“Paige plays with a great sense of poise, even when it’s frantic around her,” Megan, no longer shouting, adds. “In control. She’s good at staying in control.”

In the final minute of the second half, Paige makes her sisters proud again, corner-kicking an assist to senior defender Adrian Walker to cap a 2-0 victory. The assist is her 19th of the season, a program-record-tying number. Bourne matches the mark set by … Bourne, Paige Bourne. Her LFHS career assists total of 61 is No. 1 by a few miles (24 more than the Scouts’ second-leading assist producer) and ranks No. 32 on the Illinois High School Association’s all-time list. Her foot skills are as sharp as her vision is, a dangerous combination for defenders marking forwards in front of Bourne.

“I’ve always liked connecting with forwards,” says Bourne, a 2016 All-Sectional selectee and a three-time All-North Suburban Conference player, as well as a co-recipient (with Walker) of the 2016 Christopher Quon Scholarship Award for character and integrity on and off the field.

Her ninth goal of the ’16 season, in a playoff match against Wauconda High School on May 24, was the 111th point of her career, No. 2 all-time at LFHS. The program’s premier passer knows what to do with passes, too. The final tally of Bourne’s prep career supplanted quite a luminary in LFHS soccer history, former Stanford University and Canada women’s national team defender Rachel Quon, on the school’s all-time points list. Duke University graduate Nicole Lipp (LFHS, ’08) ranks first all-time, with 155 points, a cartoonish figure. And a bona fide one.

Bourne struck a soccer ball for the first time at the age of six. At 12, she and her Lake Forest Soccer Association teammates won a state championship. Her FC United 16s club team finished third at nationals a couple of summers ago. She played in a Class 2A sectional final in her final prep season. Bourne suits up for a soccer team; success follows. Not a coincidence. She gets to shoot and pass and pop for headers in Big Ten matches next. Purdue’s season opener won’t be too far from Bourne’s home. The Boilermakers, 9-8-1 last fall, visit Loyola University’s Ramblers in Chicago on Aug. 10.

“I’m looking forward to the intensity of the Big Ten,” Bourne says. “It’ll be a big step up. I can’t wait to play against such competitive schools.”