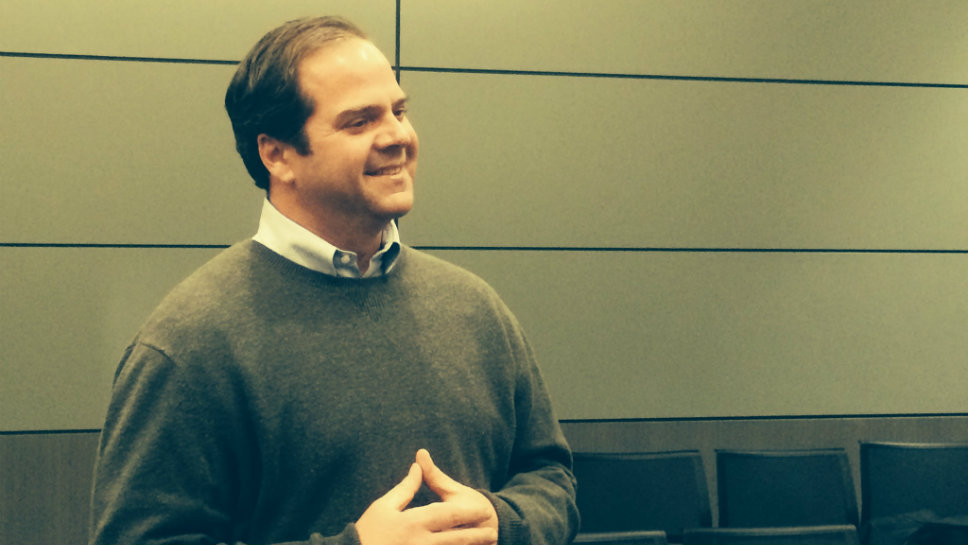 Mike Welch, a grandson of Hackney’s founders Jim and Kitz Masterson, will open Macushala Brewing 20 feet from Hackney’s on Lake.

GLENVIEW — A proposed craft brewery and tap room with family ties to Hackney’s took a step closer to reality in an unusual meeting of the Glenview Village Board of Trustees.

The board took no formal vote on the request for a conditional use permit for Macushla Brewing at 1516 East Lake Avenue, but five of the six trustees told owner Mike Welch June 7 at Village Hall he would get their approval when they next meet June 21.

The unusual legislative procedure came about because a final vote was scheduled June 7 but the matter was inadvertently left off the agenda and added later, according to Village President James Patterson. He said no vote could take place without violating the Open Meetings Act.

“Since the petitioner is here we want to give him a hearing,” Patterson said. “Each of the trustees will give him their comments so he can decide if he wants to go ahead. We’ll have the vote at our June 21 meeting.”

After Director of Planning Jeff Brady told the trustees about changes to the proposal originally presented May 3 modifying parking, hours of operation and efforts to prevent outdoor music from disturbing neighbors, the five trustees present said how they would vote.

Trustees John Hinkamp, Scott Britton, Paul Detlefs and Philip O’C. White said they would vote for the permit while Trustee Deborah Karton said she would oppose it. Trustee Michael Jenny arrived late and did not offer input.

Welch, a grandson of Jim and Kitz Masterson who bought a home on Harms Road from Jack and Bebe Hackney in 1939 and developed Hackney’s into the five-restaurant chain it is today, wasted no time after the meeting making his intentions known. He said he hopes to open early next year.

“Absolutely I’m moving ahead. We’ll be working on getting our permits and licensing,” Welch said after the meeting in a Daily North Shore interview. “It’s not as hard as you think,” he added referring to the four months he said he expects it to take to convert a laundry into a brewery.

The building Welch will renovate into a brewery and tap room is 20 feet from Hackney’s Lake Avenue restaurant. He said it is already equipped with commercial water and electric hookups easing the build out. He expects the construction to last four months. Then he has another important task before he can open.

“It will take a month to brew the beer,” Welch said. “We’ll have eight to 10 beers at any one time. Three to four will be (available) all the time and the others will rotate.”

Once Macushla opens, Welch said it will operate from noon to 10 p.m. Tuesday through Saturday and from noon to 8 p.m. Sunday. It will be closed Monday. There will be 37 seats inside the tap room and 60 more outdoors during summer.

Welch said has no plans to bottle his beer for sale but will sell it to Hackneys and other nearby establishments. The music will be recorded. He said at this time he has no plans for live music.

“Our first priority will be brewing beer for people to enjoy at our tap room,” Welch said. “We’ll brew as much as we can in our space.”

One difference between a tap room like Macushla and a brew pub is the food that can be served, according to Welch. A tap room is severely limited in what it can serve and he said he has no wish to put in a kitchen.

“You have to offer food like jerky and pretzels because people are drinking,” Welch said. He also said in a previous DNS interview people can bring their own food and he will make it easy for them to order off Hackney’s menu.

Before Welch could get the board’s approval, he had to persuade the trustees there would be sufficient parking when he turns the laundry into a tap room that can accommodate 97 people at one time. He said valet parking will be offered at the busier times.

Karton wanted to know how Welch would modify the music so it would not disturb neighbors. He said the speakers were pointed inward toward the brewery.

When it opens, Macushla will be the village’s second brewery and tap room after Ten Ninety opened in May.