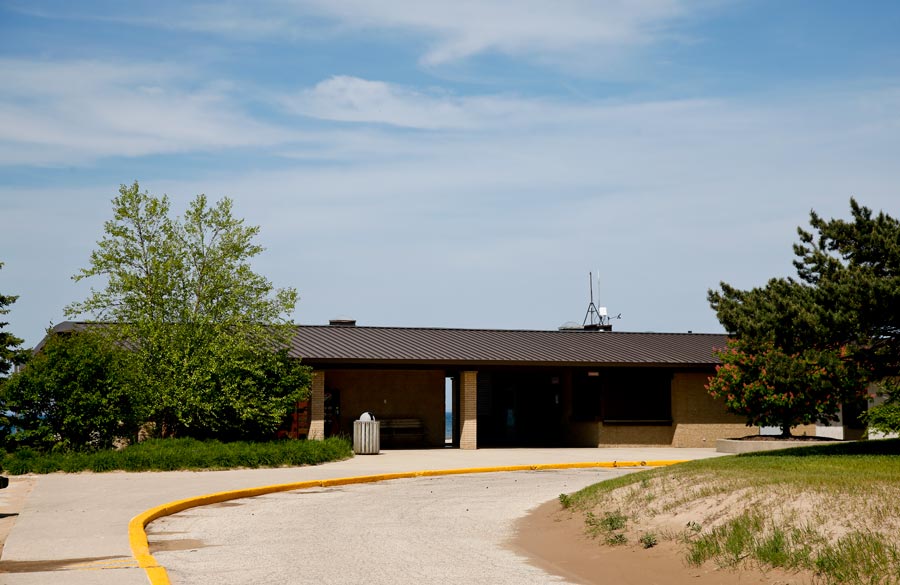 The beach house at Gilson.
Photography by Joel Lerner/JWC Media

WILMETTE – Tasked with deciding how to best move forward with plans for a new beach house at Gillson Park, the Wilmette Park District’s Lakefront Committee on June 6 decided to go the traditional route and issue a Request for Qualifications, or “RFQ,” to solicit bids by architectural firms.

The Park Board discussed in May whether to issue an RFQ or offer a design contest that could potentially draw the interest of architects in the community. The Park District issued an RFQ in the last go around, but that plan was overwhelming rejected by voters in the April 2015 election.

Either route, the Park District must provide a detailed program for the beach house to interested architects. At the June 6 meeting, the commissioners responded positively to a proposed program for a new beach house presented by Bill Lambrecht, superintendent of parks and planning.

Lambrecht and his staff utilized the floor plan of the previous design, but they reduced the scope by eliminating the north bathrooms and reconfiguring the interior to utilize some corridor space. The proposed design program would increase the overall square footage of the current beach house by 850 square feet, or 42 percent, to 2,871 square feet for the proposed design. In contrast, the design rejected by voters was 3,800 square feet, which would have been an 88 percent increase over the current building.

The proposed program for the new beach house includes five more toilets than the current beach house, with new separate family washrooms. According to Lambrecht, the standard for bathrooms is two toilets for the first 100 bathers and one additional toilet for every additional 100 bathers.

The commissioners discussed whether including additional toilets was necessary, ultimately concluding that the numbers seemed about right.

“I think it is plenty,” Commissioner Shelley Shelly said.

Kathy Bingham, superintendent of recreation, told the Lakefront Committee that in 2015 there were 21 days that exceed 800 beach-goers, but that number does not include day campers. “I think the need is there for the number of toilets we are proposing,” Bingham said.

Another focus on the proposed design program was whether to upgrade the concession area to include a kitchen. Currently, the concession does not have cooking facilities. The Park District would purchase new equipment to include refrigeration, a cook line, grills and fryers and other standard concession equipment. Lambrecht estimated costs for the new equipment at about $30,000. Bingham also noted that it was likely the Park District could charge double the rent for the new space, which is currently rented at about $10,000 for the summer.

“I think we should have a cook line down there,” Commissioner Shelly said. “ We are going to have happier beach-goers,” she added.

But Commissioner Ryrie Pellaton questioned whether it was necessary to spend that money. Bingham responded that elaborate vending machines that dispensed items such as sandwiches could be installed as an alternative.

But Commissioner Shelly overhwelming supported an upgraded concession. “I am strongly in favor of adding this amenity,” she said. “If we tear down our building and then offer the Wilmette community vending machines then that is a big fail,” Shelly said. “Let’s do it the right way,” she added.

President John Olvany chimed in the from the audience, adding his support for an upgraded concession. ” I think it would be a massive mistake if we don’t invest in what needs to be invested in,” President Olvany said. He pointed to the Wilmette Golf Course restaurant, which is popular among not only with golfers but also non-golfers who simply enjoy the view. “I think if you invest a little into it the return will be great,” he said.

While constructing a new beach house, the Park District plans to also make improvements to the parking lot. The goals are to improve traffic flow, add parking for the sailing beach and the Wallace Bowl, and resolve stormwater issues, while reducing the overall amount of pavement. At this point, the commissioners agreed with those goals and noted it would be discussed further once plans were submitted.

After discussing the proposed design — which the commissioners overall agreed with — they addressed the issue of whether  to issue an RFQ or a hold a design competition. Commissioner Pellaton noted that he was wary of holding a design competition, since they are typically held for larger scale projects such as a new airport. Instead, he suggested that the Park District solicit a few different designs from each participating architect that featured different styles — such as Victorian, Nantucket-style or modern — and then get feedback from the public on those ideas.

Both Shelly and Abbott agreed that it made the most sense to issue an RFQ that would include additional design concepts as part of their submission. This plan would still create a competitive bidding process that would allow the Park District to receive feedback from the community.

Commissioner Pellaton noted that this process would address residents’ primary concerns. “It’s going to be about the look of (the beach house) and the overall size of it and the cost,” he said.