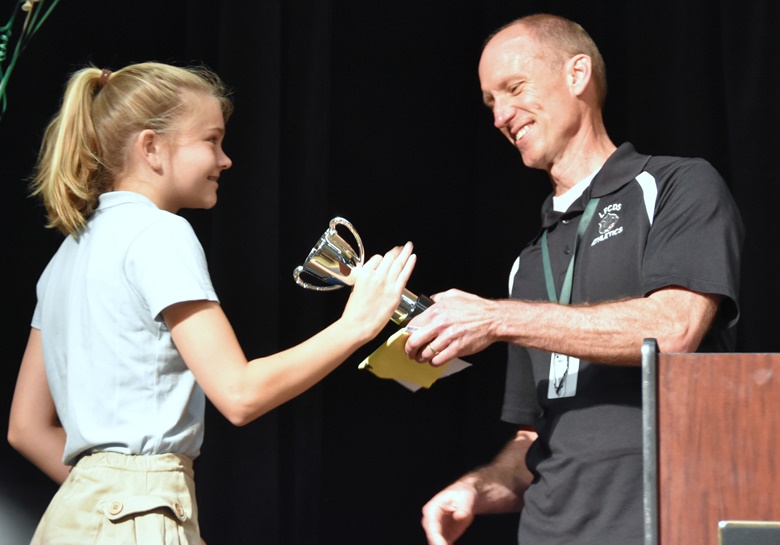 LAKE FOREST – With the addition of two new sports this year – cross country and boys’ lacrosse – Lake Forest Country Day School (LFCDS) athletes had plenty to celebrate at the school’s athletic awards ceremony. The school welcomed alumna Lexi Silver ’12 as the keynote speaker, and she spoke eloquently on all the steps that make up the school journey both literally and figuratively, and how those steps shape each student’s future.

The LFCDS philosophy maintains that team sports provide students with critical life skills and unique perspectives on leadership, cooperation, and self-advocacy; and 98 percent of Upper School students participate in at least one school sport each year. Silver, a recent Lake Forest Academy graduate who will matriculate at the University of Maryland in the fall on a full scholarship for field hockey, credits much of her success to her roots at LFCDS. She said it was at the school that she learned the foundations of hard work and perseverance.

“It’s not about how good you are, but how much you want it,” said Silver.

Grade 8 students Michael Giambrone, Grace Fitzgerald, and Jackson Kriger spoke about their athletic lives at LFCDS, and the 2016 Coaches Awards were announced. The recipients were:

“Research shows that children who participate in team sports fare better both academically and socially in school, said Head of School Bob Whelan. “At LFCDS, our students learn to think critically, cope with problems, and learn from mistakes – all essential factors in the building of character.”

Submitted by Lake Forest Country Day School. LFCDS serves students from more than 30 communities throughout the North Shore and beyond. A regional center of excellence for early childhood, elementary, and middle school education for children ages 2 to Grade 8, LFCDS is committed to inspired teaching, academic rigor, attention to individual needs, and responsible citizenship as well as the dedication to producing students of strong character with a passion for learning. Students are given the opportunity to participate in a no-cut, yet highly competitive and instructional athletics program beginning in Grade 4.  For more information on LFCDS, please visit www.lfcds.org or call (847) 234-2350.