3 — New Trier’s girls soccer team pulled off the three-peat at the Class 3A state tournament in Naperville on June 4.

6 — It was the sixth state title for head coach Jim Burnside during his 19-year stint with the Trevians.

21 — Over the past three seasons, the Trevians (26-3-1), led by four-year starter Dani Kaufman in goal, have strung together 21 straight shutouts in postseason play. 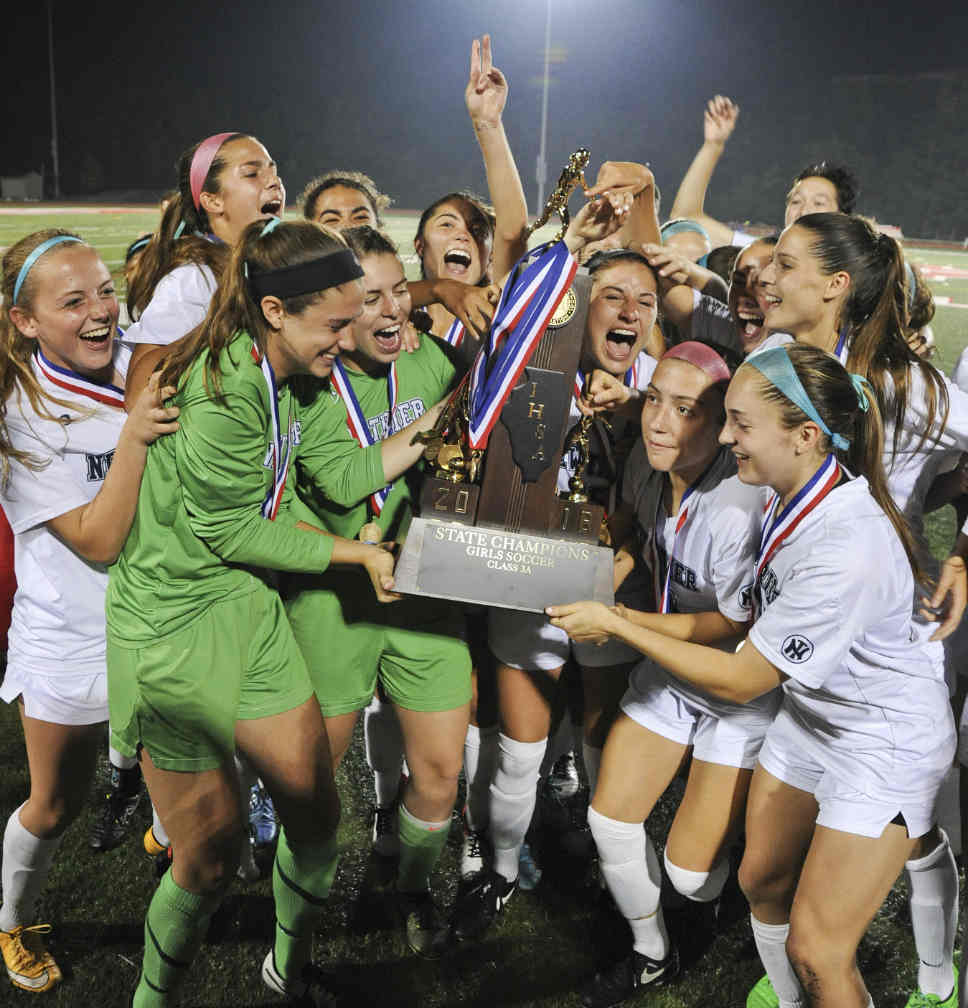 Members of the New Trier girls soccer team celebrate with their first-place trophy. 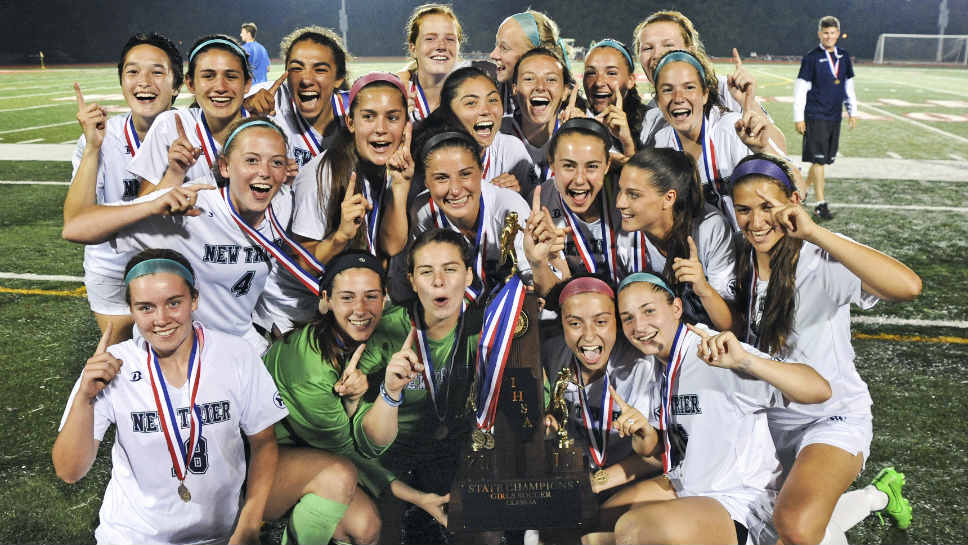 Coach Jim Burnside, in the background, watches his team pose for the cameras. 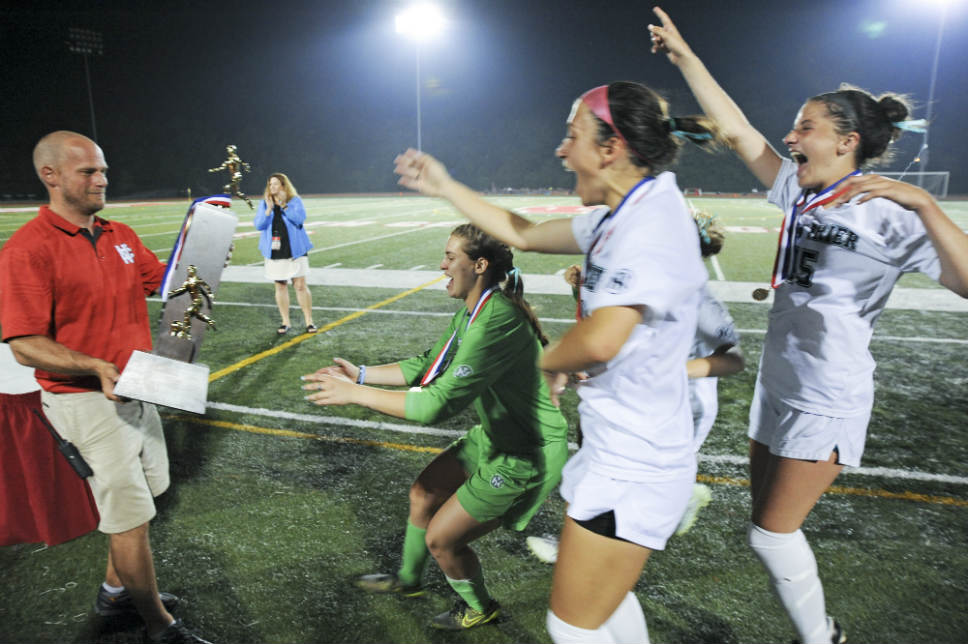 Dani Kaufman, Bina Saipi and Celia Frei lead the charge — to the trophy. 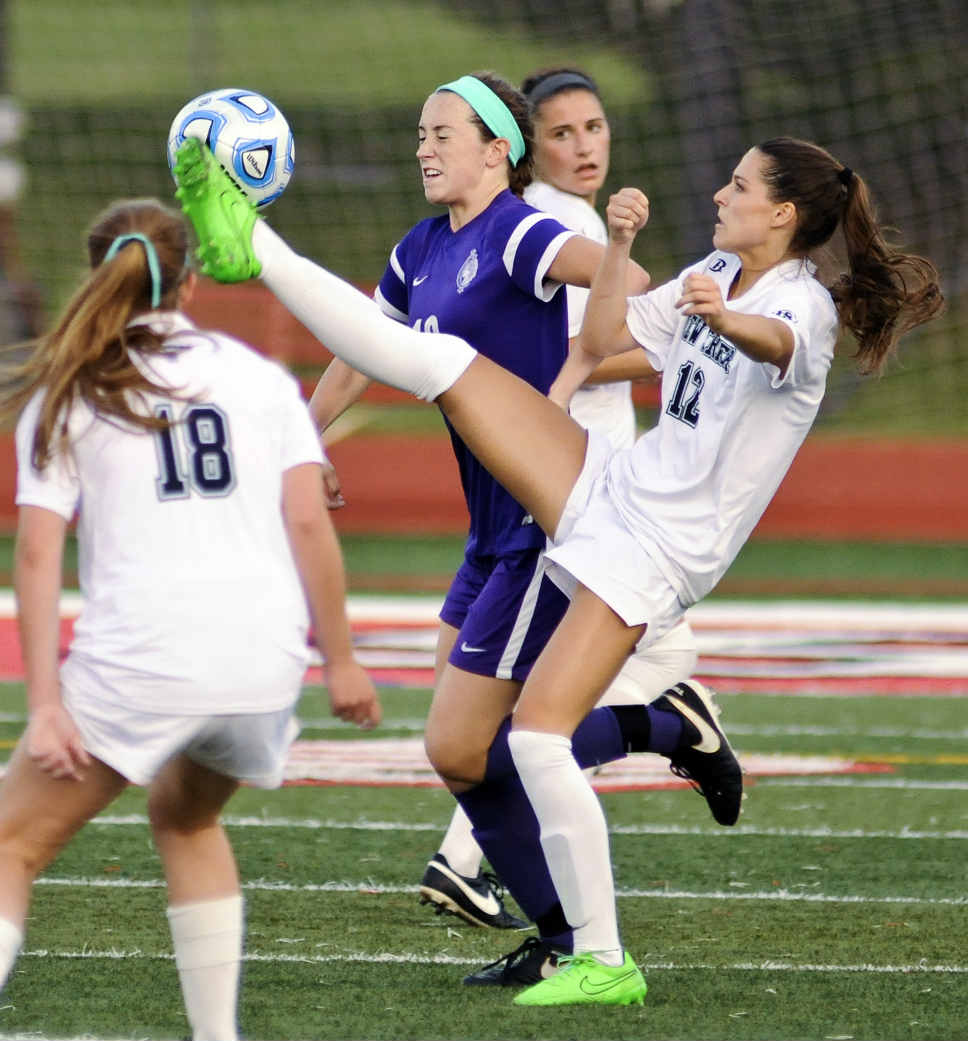 Natalie Laser (No. 12) shows off her trademark lime green shoes. The junior scored the team’s first goal in the championship game. 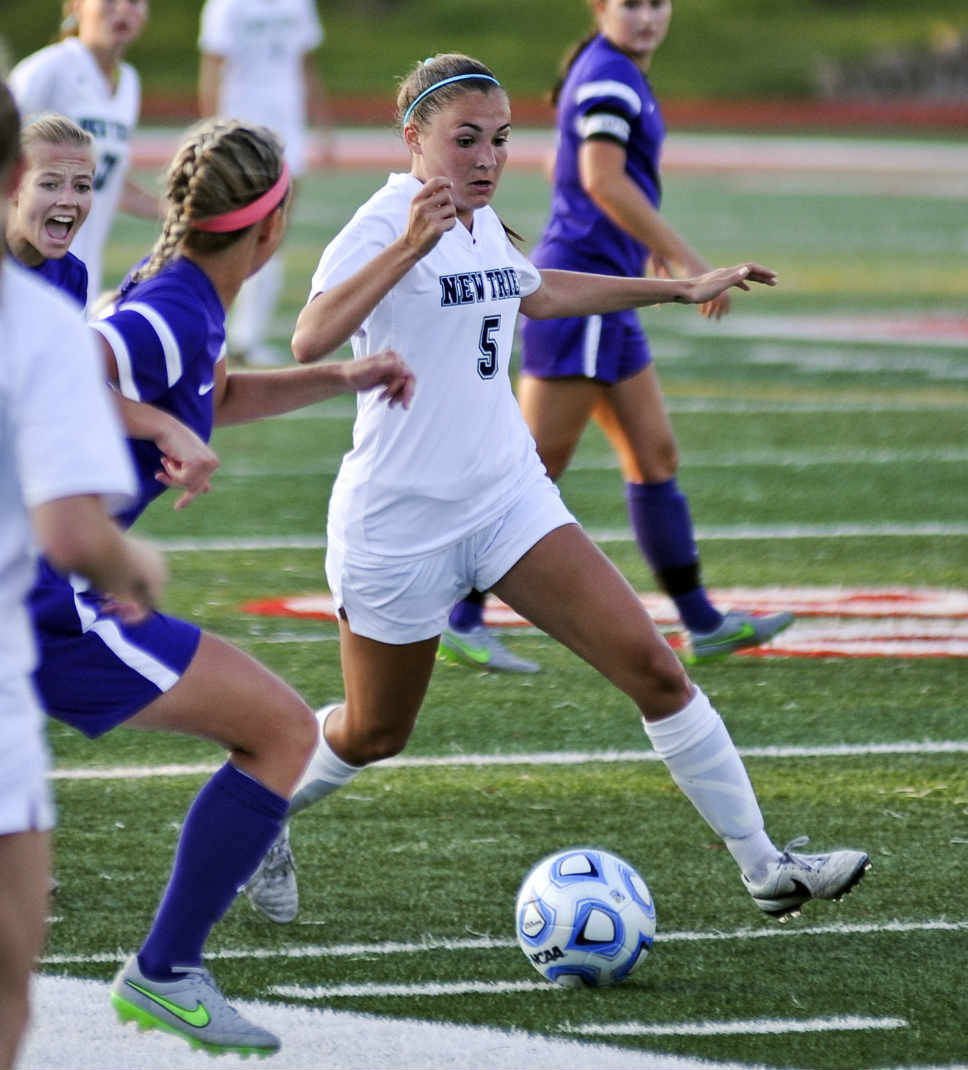 Caroline Iserloth (No. 5) takes possession of the ball. The NT sophomore defender came up with her team’s second goal in the championship game. 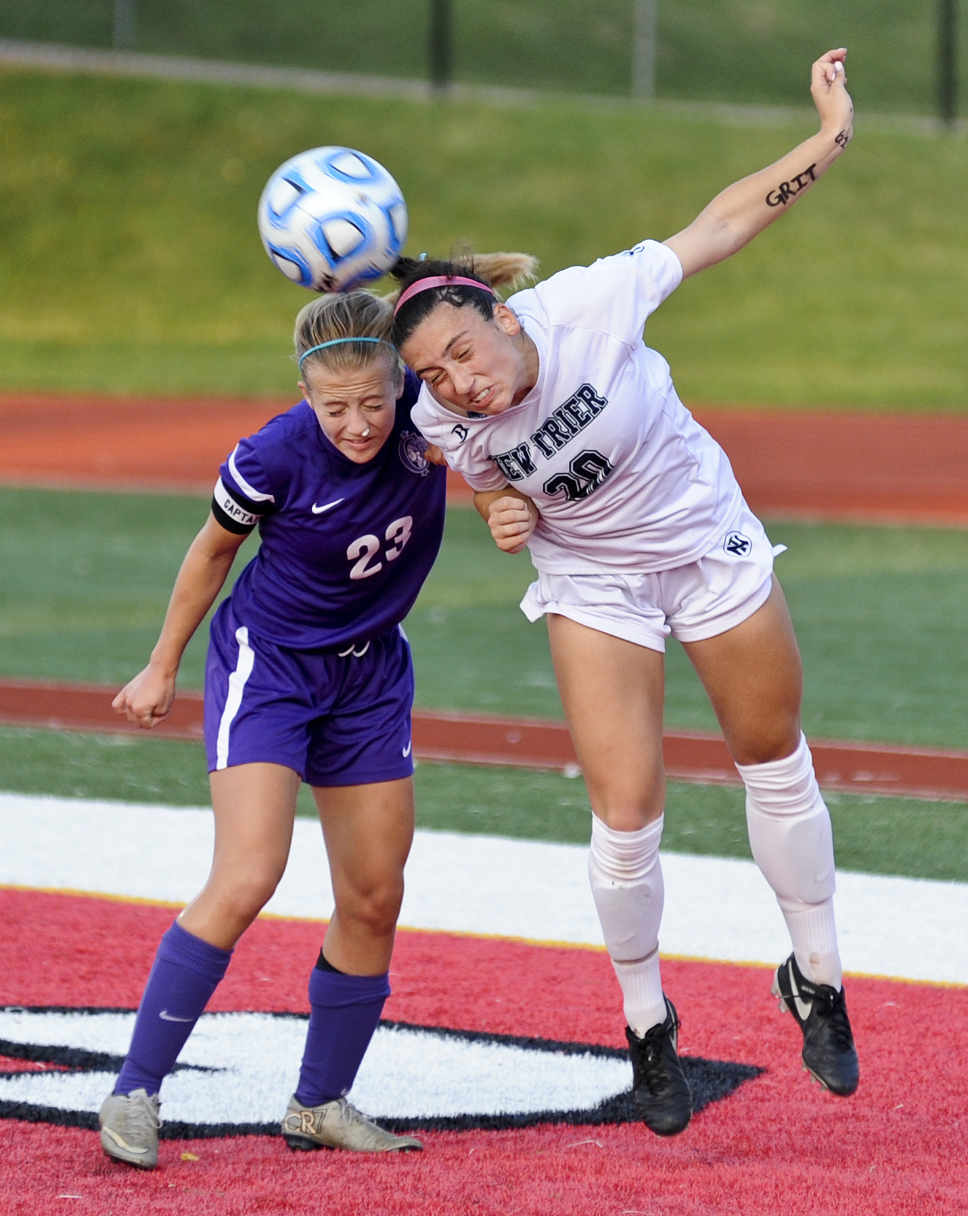 Bina Saipi of the Trevians (No. 20) heads the ball against Collinsville’s Hanna Liljegren. Saipi put in NT’s third goal in the final. 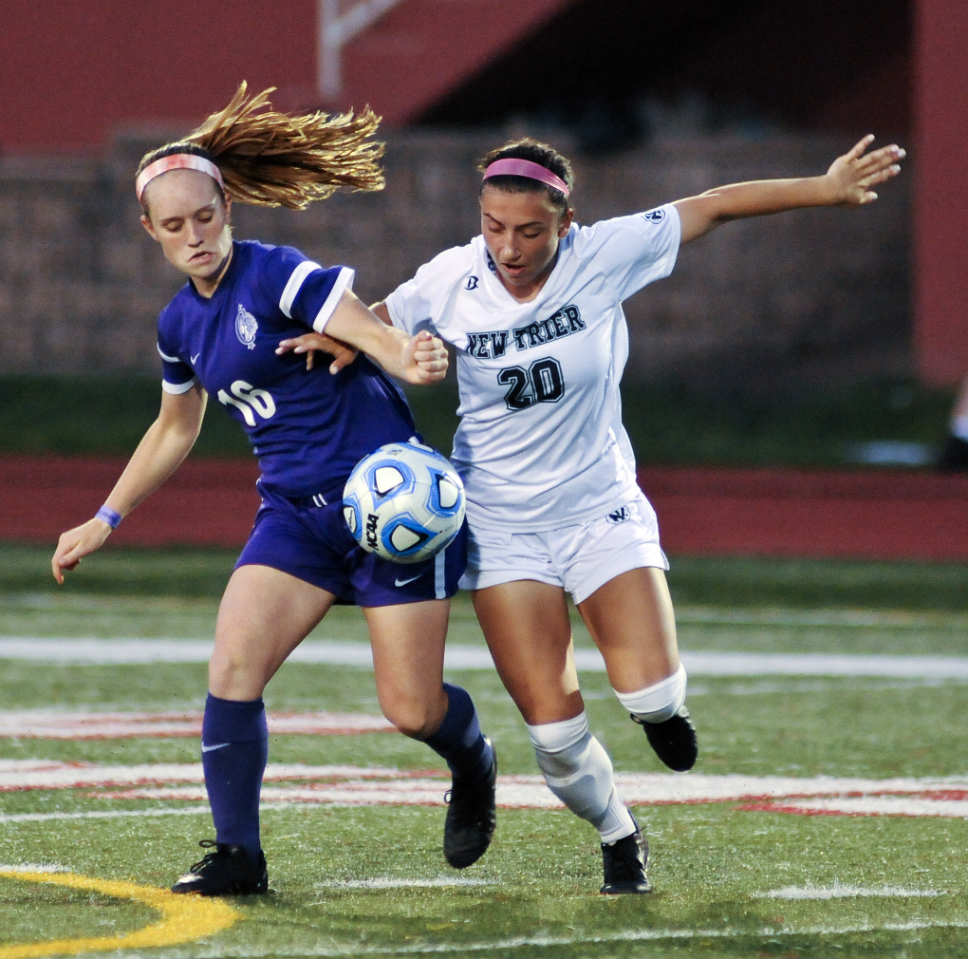 Bina Saipi (No. 20) fights for possession against Collinsville’s Andrea Frerker. 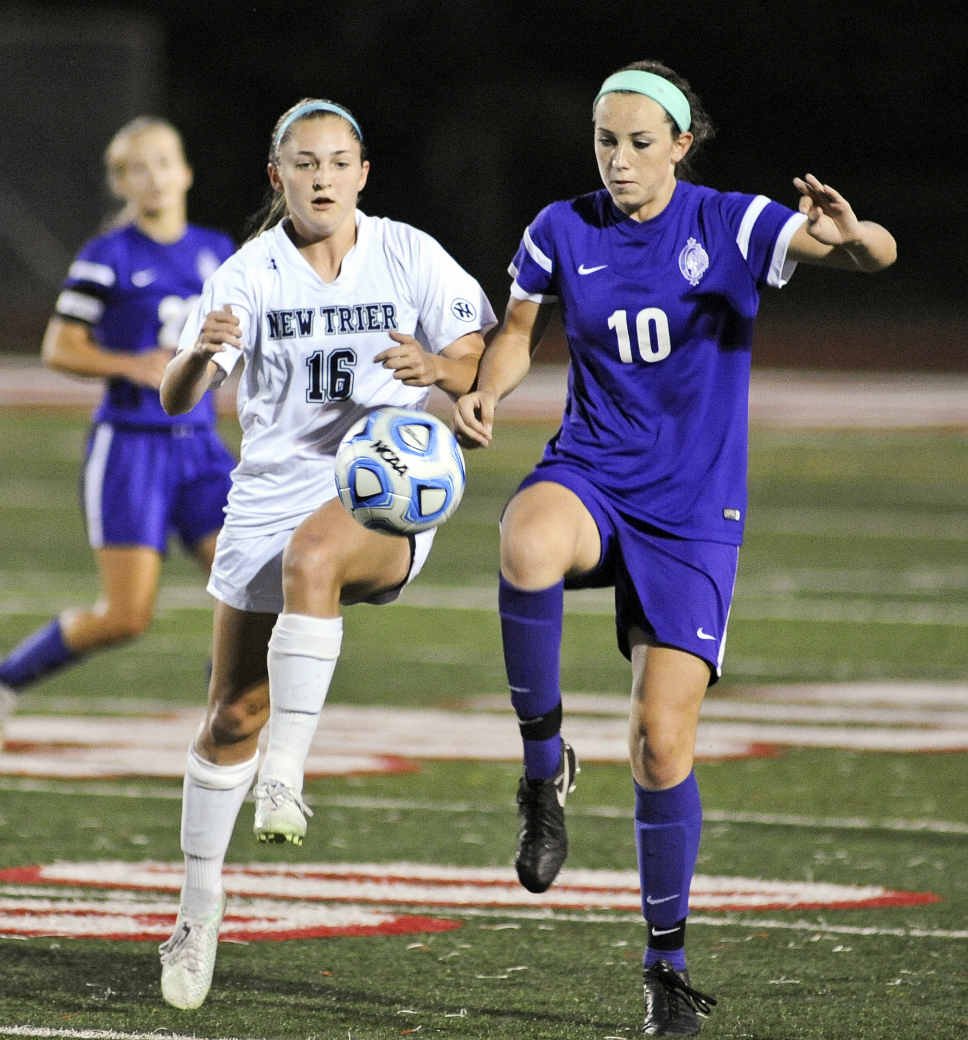 New Trier’s Kelly Maday (No. 16) looks to win the ball against Collinsville’s Chayse Richardson. Maday capped the scoring in the state title game with a second half goal. It was her team best 17th of the season. 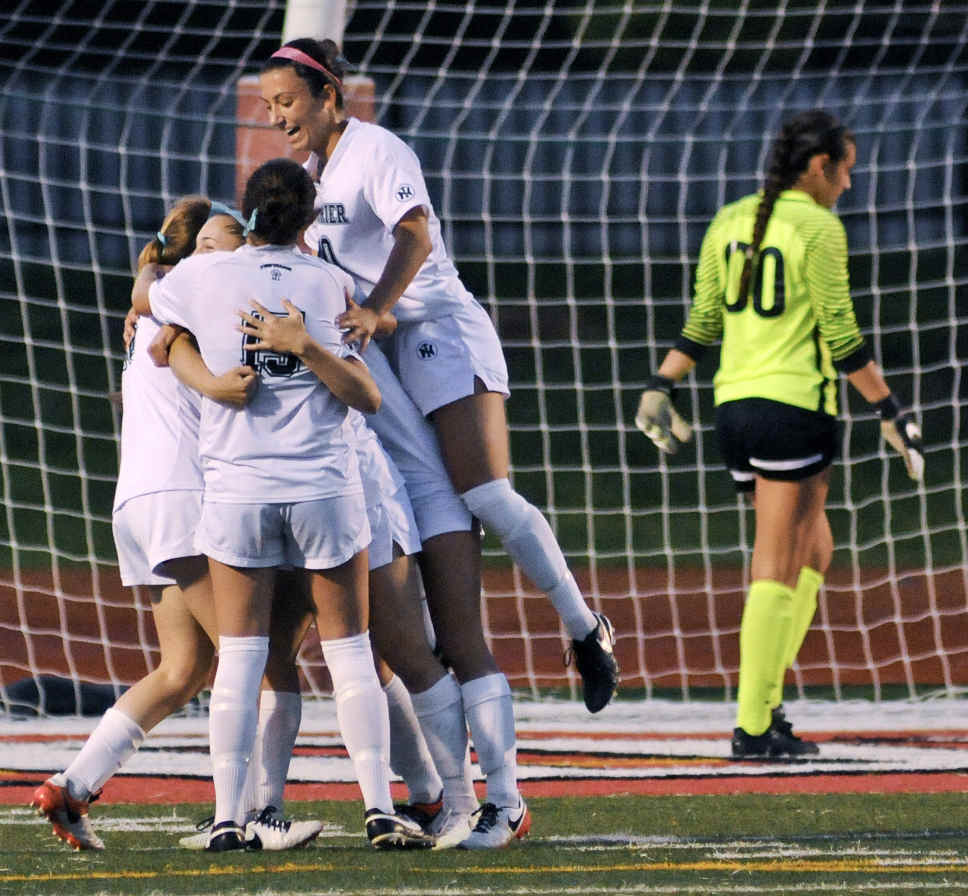 Bina Saipi (top) and fellow teammates mob Kelly Maday after Maday scored in the second half against Collinsville. 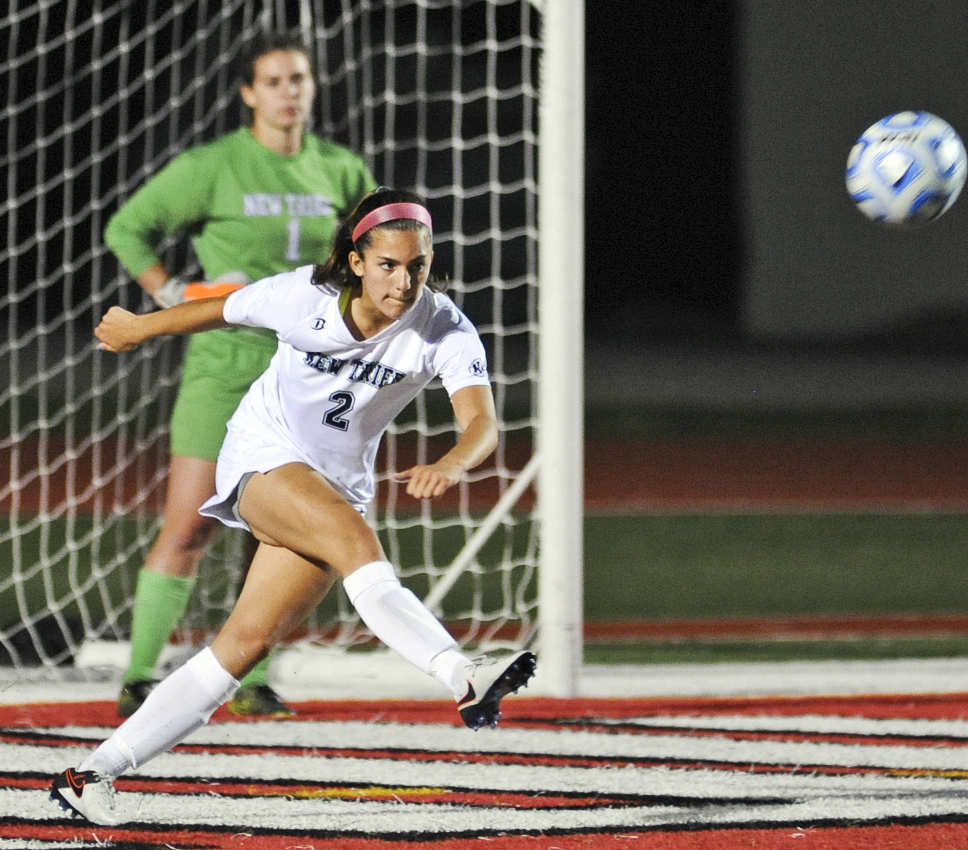 Sam Urban of the Trevians kicks the ball away in the championship game. The defender scored her team’s first goal in the state semifinal against Huntley. 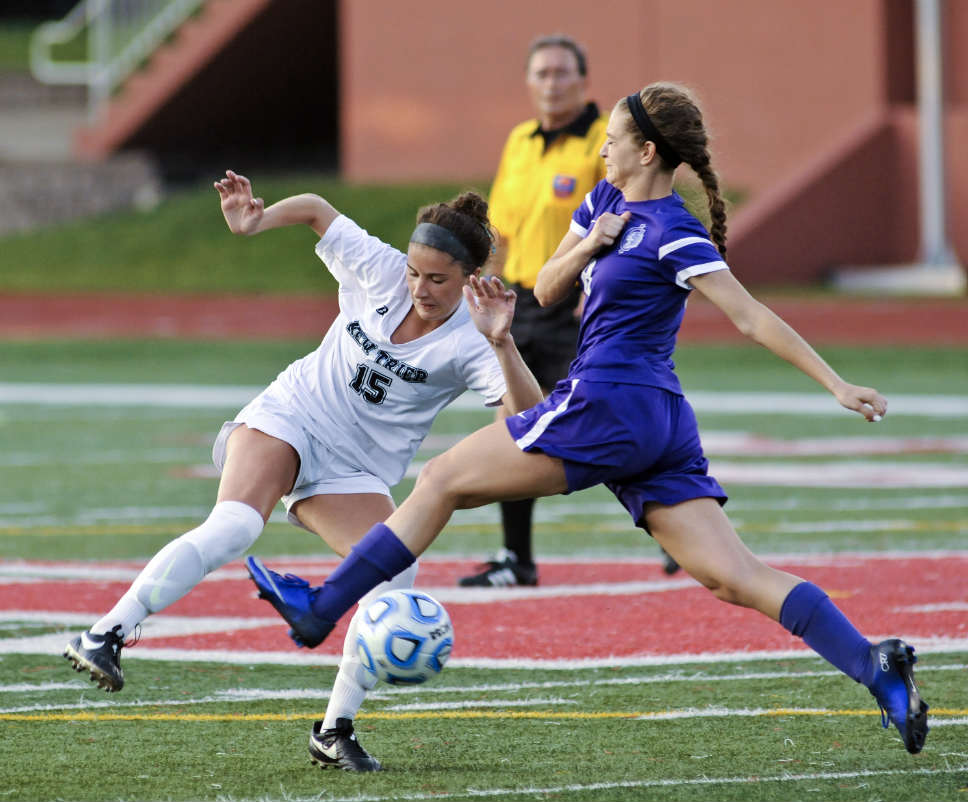 Senior Celia Frei of the Trevians works against Collinsville’s Danille Knutson. She drilled in a goal in the state semifinal. 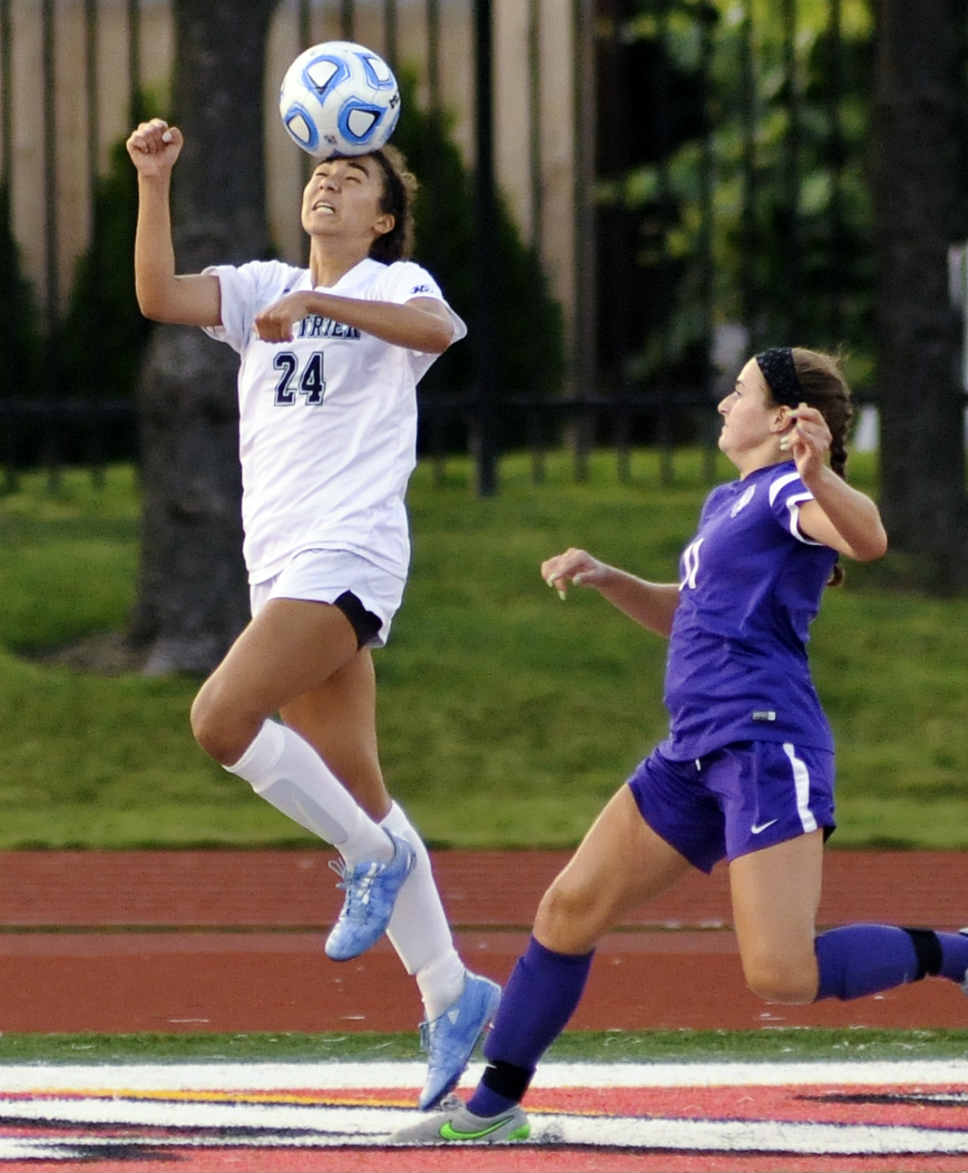 Sophomore defender Sydney Parker heads the ball away in the title game against Collinsville. She scored a header in the win over Huntley. 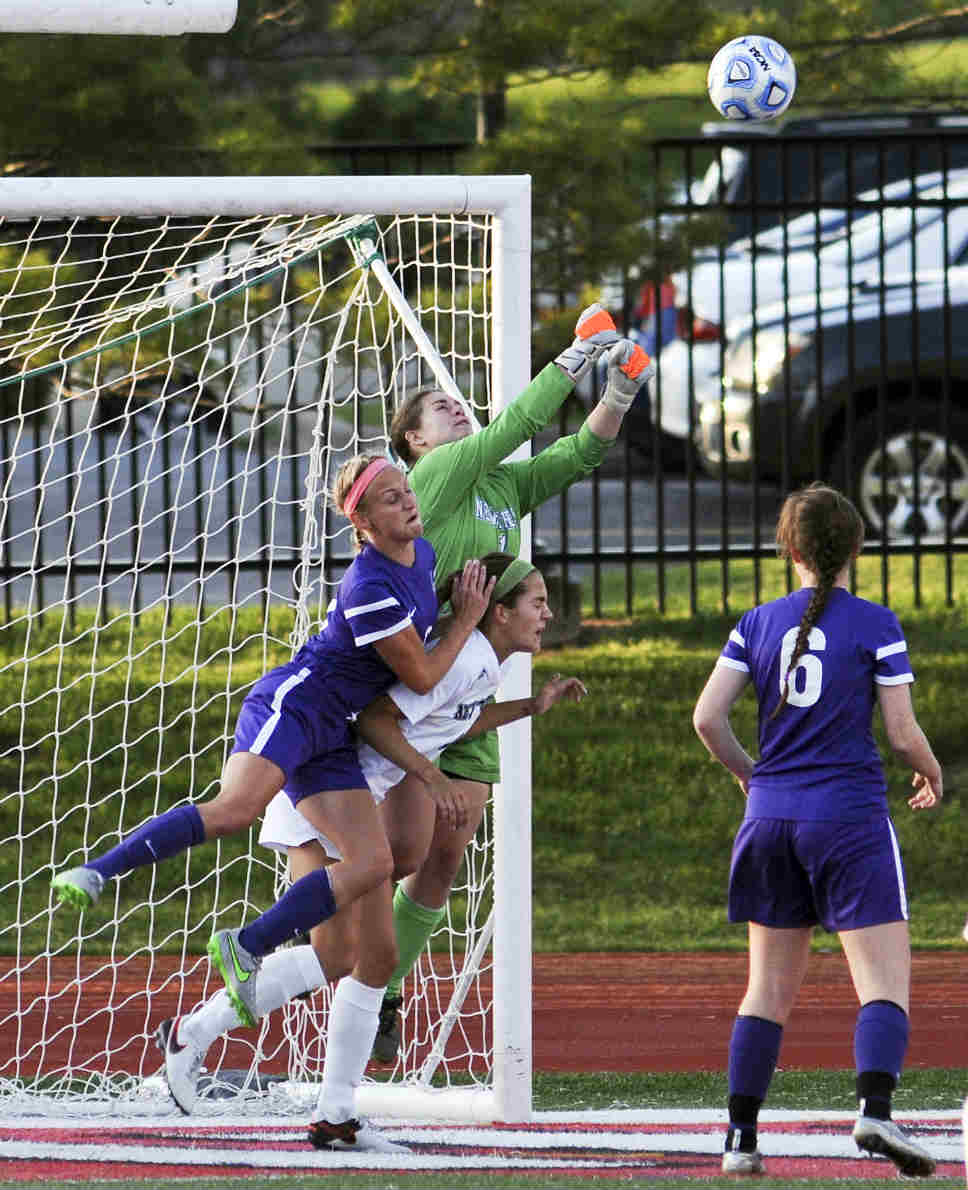 NT goalie Dani Kaufman punches the ball away during first half action in the state final. 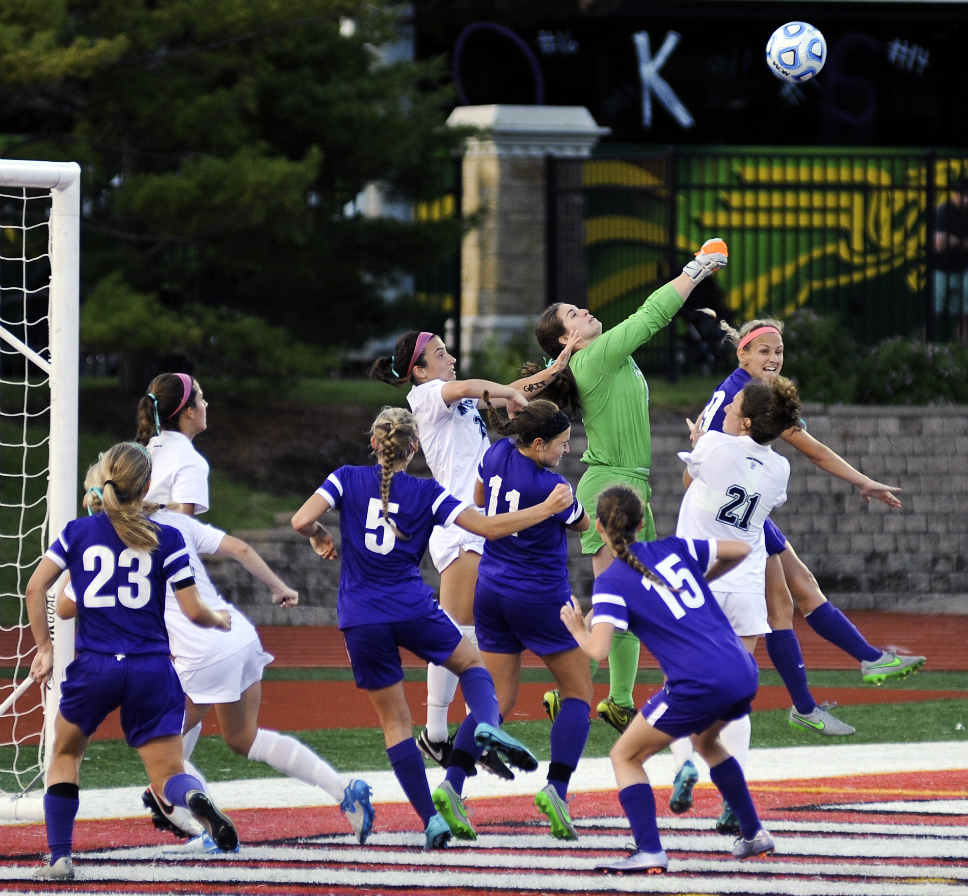 With the help of Katie Sadera (No. 21) and Bina Saipi (No. 20), NT goalie Dani Kaufman punches out another shot by Collinsville. 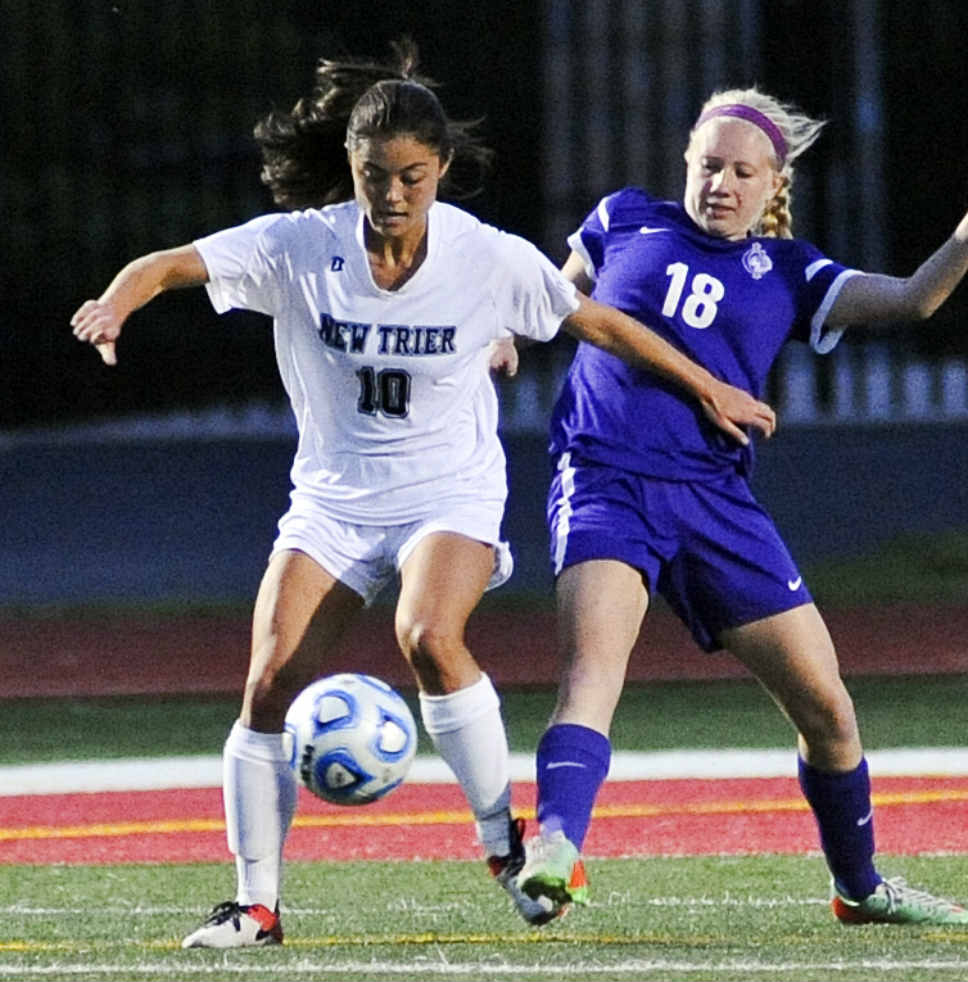 Haley Yamada of the Trevians (No. 10) staves off Collinsville’s Kaylee McSpadden. 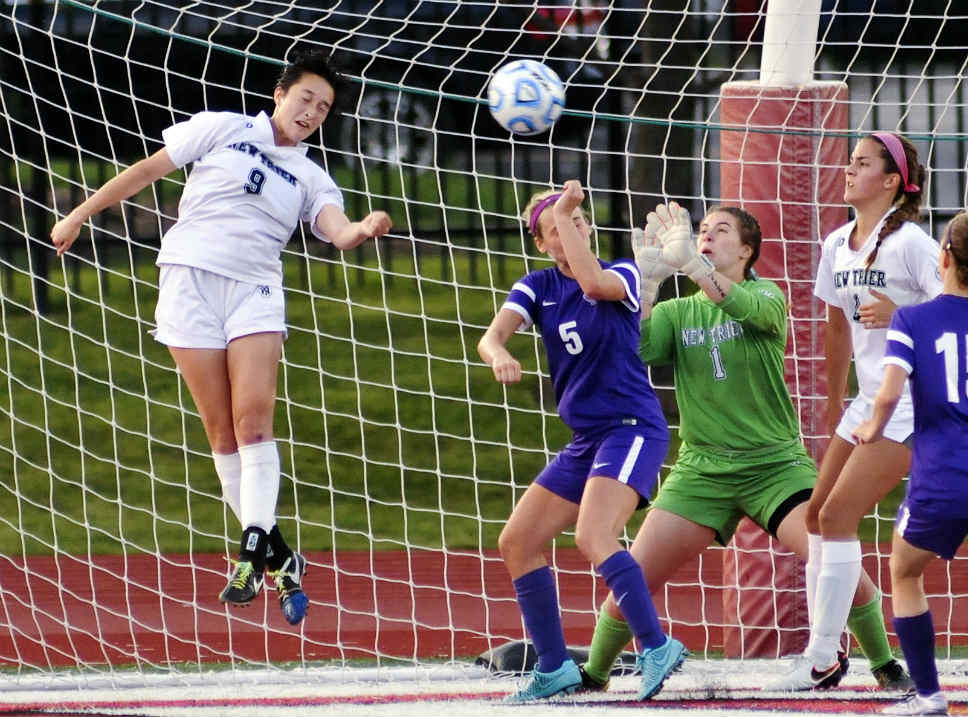 Flower Edington heads the ball away from the New Trier goal. 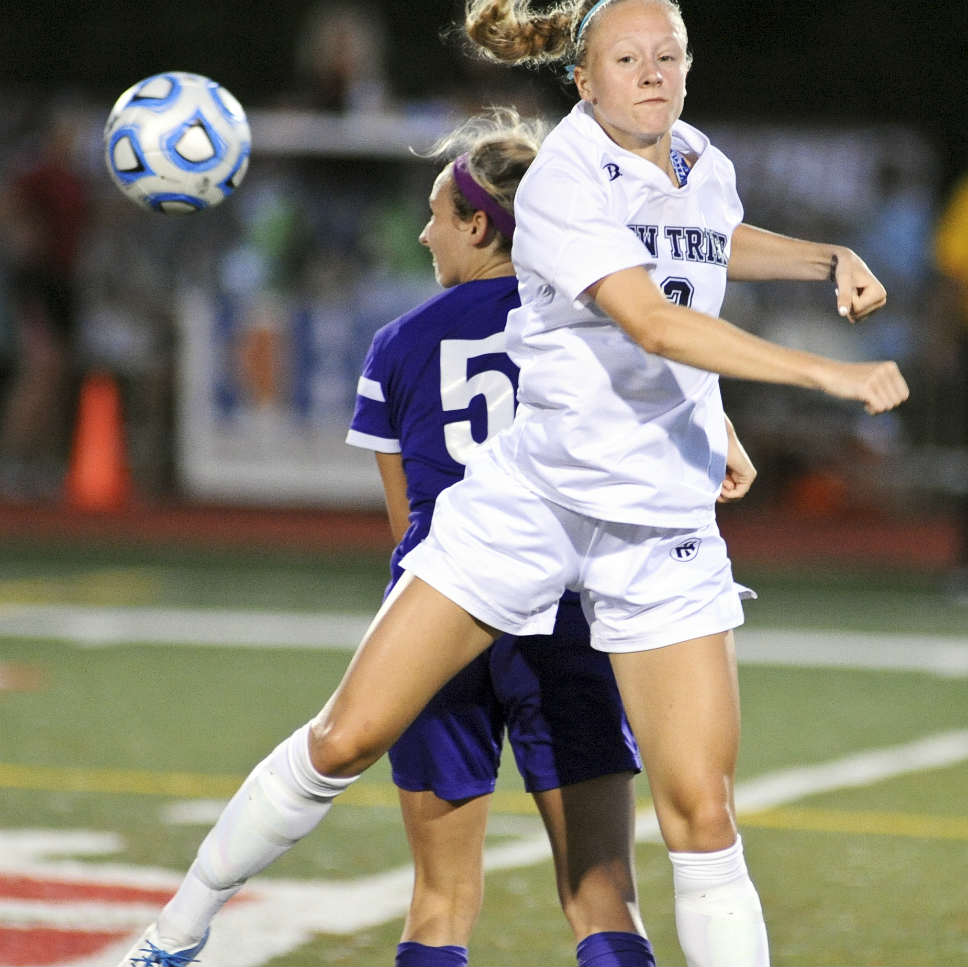 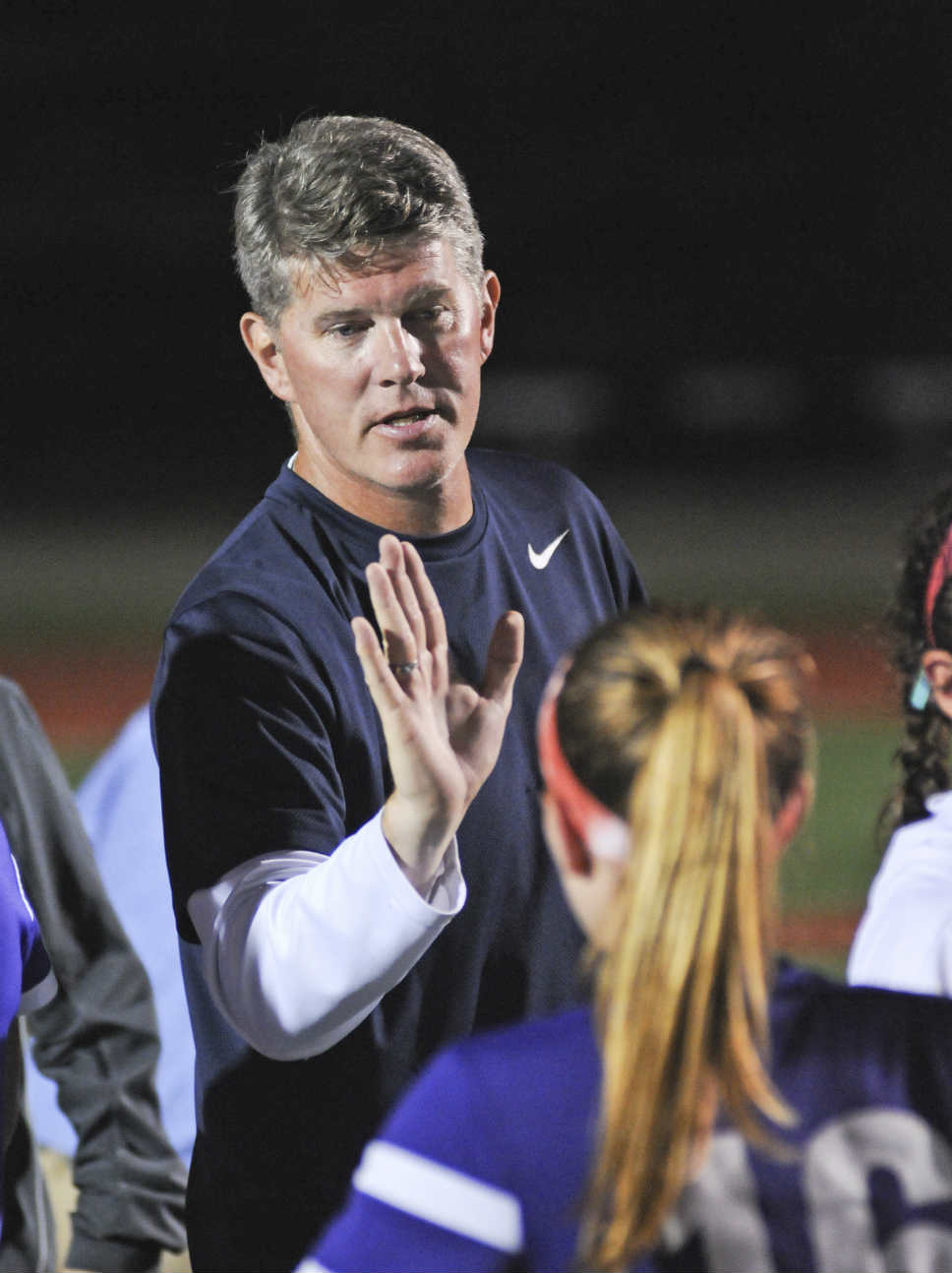 New Trier coach Jim Burnside gets ready to high-five one of his players during the championship game.