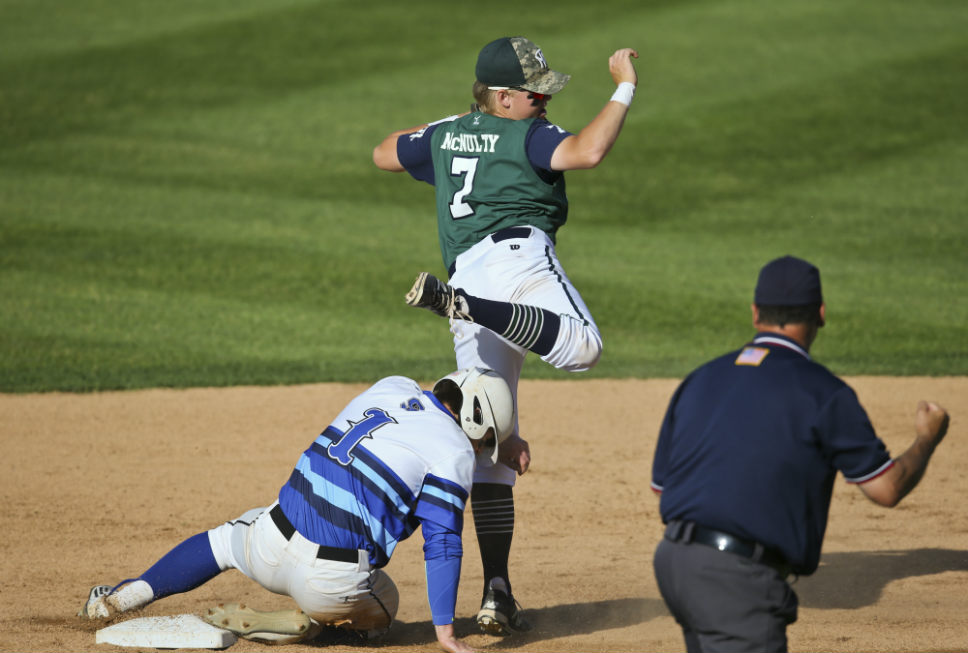 New Trier second baseman Will McNulty hangs in tough against St. Charles North’s Brendan Joyce as the Trevians turn a 5-4-3 double play in the third inning. PHOTOGRAPHY BY JOEL LERNER

With style and precision.

Moments after his team’s postgame meeting, following a gut-wrenching 4-3 loss to St. Charles North in the Class 4A Supersectional at Boomers Stadium on June 6, the junior got blitzed — by sportswriters.

He handled the questioning with poise.

Which was not easy after a loss of this magnitude.

All playoff losses are difficult. But this one was downright unbearable — for the Trevians.

The North Stars, who trailed 3-0 after five innings, rallied to win the game with two runs in the sixth and two in the seventh.

McNulty had done his part. The slick fielding second baseman made two sparkling plays in the fourth and fifth innings.

With the bases loaded and one out in the bottom of the seventh inning, and with a tough sun beating down on the right side of the field, McNulty tried to make a game-saving play on a hard groundball hit by SCN’s Sam Faith that had ricochet off the glove of NT first baseman Matt Kann.

Moving hard to his left, McNulty gathered in the deflected ball. But his throw to first base, with relief pitcher Ryan Acri covering, arrived late and two base runners — Brendan Joyce from third and Zach Mettetal from second — came in to score.

“I saw it bounce off Matt’s glove and go straight up,” said McNulty. “It just stayed up in the air way too long.”

“The ball took a high hop and Matt just couldn’t get to it,” added NT head coach Mike Napoleon.

“That’s baseball,” McNulty said. “You can’t control everything out there.”

Earlier in the game, McNulty came up with some outstanding defense.

In the fourth inning, No. 7 made a backhanded stop on a ball hit up the middle. He threw out St. Charles North’s Connor Bizik by a step.

Then, in the fifth inning, NT made a rare 4-1 putout, when McNulty showed off his range by going to his left and flipping the ball to first with starting pitcher Ben Brecht covering. SCN’s Erik Rabin was out by a half step.

McNulty also teamed with third baseman Dylan McGuire and Kann on a 5-4-3 double play in the third inning.

Plays like that, along with some timely hitting and clutch pitching, had the Trevians (27-10) poised for a trip to Joliet.

Advancing to the State Finals would’ve been quite the accomplishment for a team that pretty much flew under the radar this spring.

“No one saw us coming,” said McNulty. “We always had a chip on our shoulder. Teams overlooked us. We were never in the Prep Baseball Report (PBR) Top 25.

Glove Gems: McNulty (backhand stop up the middle and strong throw to get the final out in the 4th inning, play to his left and flip to the Brecht covering first to get the second out in the 5th inning).

— McGuire opened the game with a 4-pitch walk against Lambert. He came around to score, when Acri doubled over the center fielder’s head. Later in the inning, Kevin Donahue, who reached on a walk, scored from third on a groundout to second by Dylan Horvitz.

— In the top of the third, Kann smacked a double to right-center field. He later came home on an error by the SCN catcher, who threw the ball away on Donahue’s steal of second. — Brecht had a three-hit shutout going until he ran into some trouble in the sixth inning. The North Stars used an RBI groundout by Jon Legare and a run-scoring double by Faith to cut the lead to 3-2. Acri came to rescue by getting the final two outs, including a called third strike on Eric Rabin.

Notable: Brecht, who was pitching on three days rest, finished the season with a 10-0 record. He threw 99 pitches as did his counterpart: Lambert. … New Trier committed three errors and stranded a runner on third in the first, third and fifth innings. … NT’s roster featured eight seniors, 17 juniors and one sophomore.

— “He’s been our go-to guy in the playoffs. He’s a senior with a lot of moxie. He wants the ball.” — New Trier coach Mike Napoleon, on using Acri in the closer’s role.

— “Ben just ran out of gas.” — Napoleon, on taking Brecht out the game in the sixth inning.

— “Lambert settled in. He had things going his way [after the third inning]. — Napoleon.

— “Our guys competed. This group loved being together. They’re a tight-knit group — and not just on the field.” — Napoleon.

— “This team was different than any team that I’ve been on. Everybody was always into it. We always believed that we could win. I’ll always remember the fun we had.” — NT junior second baseman Will McNulty.

— “We’ve got 18 guys coming back. We’re experienced. We’ll get back here next year and go further.” — McNulty. 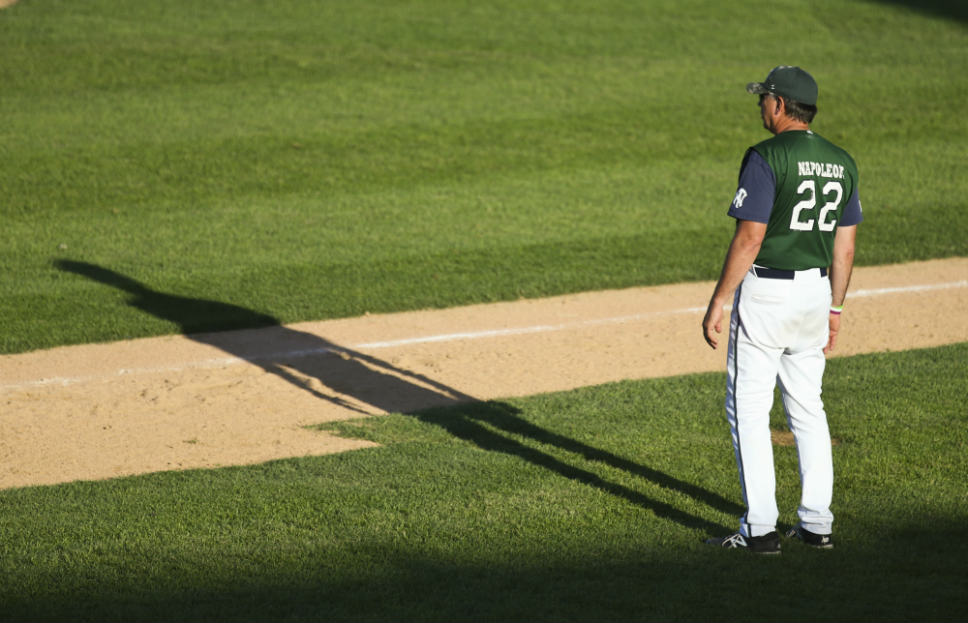 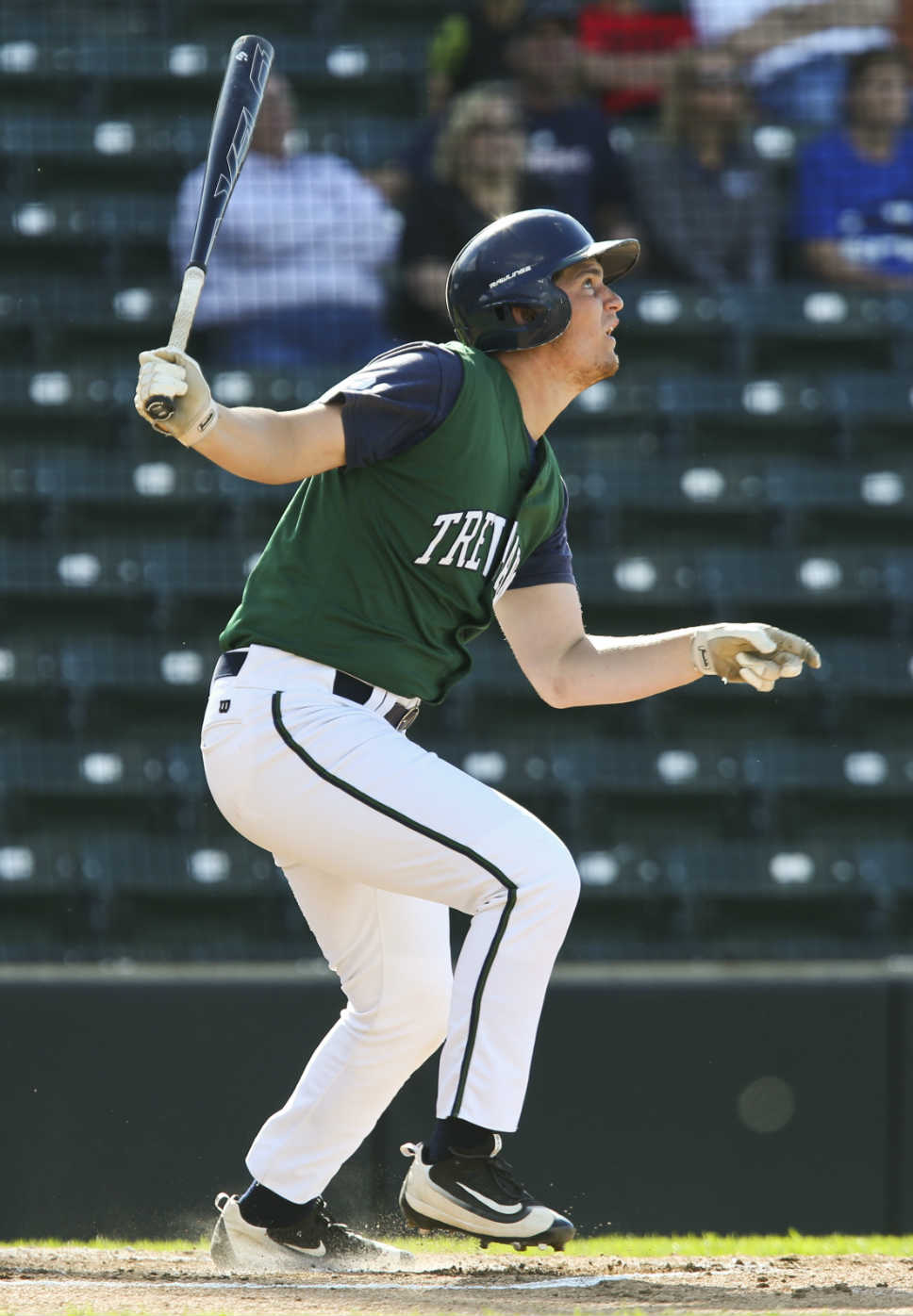 Ryan Acri of the Trevians watches after smacking a double of the center fielder’s head in the first inning. PHOTOGRAPHY BY JOEL LERNER 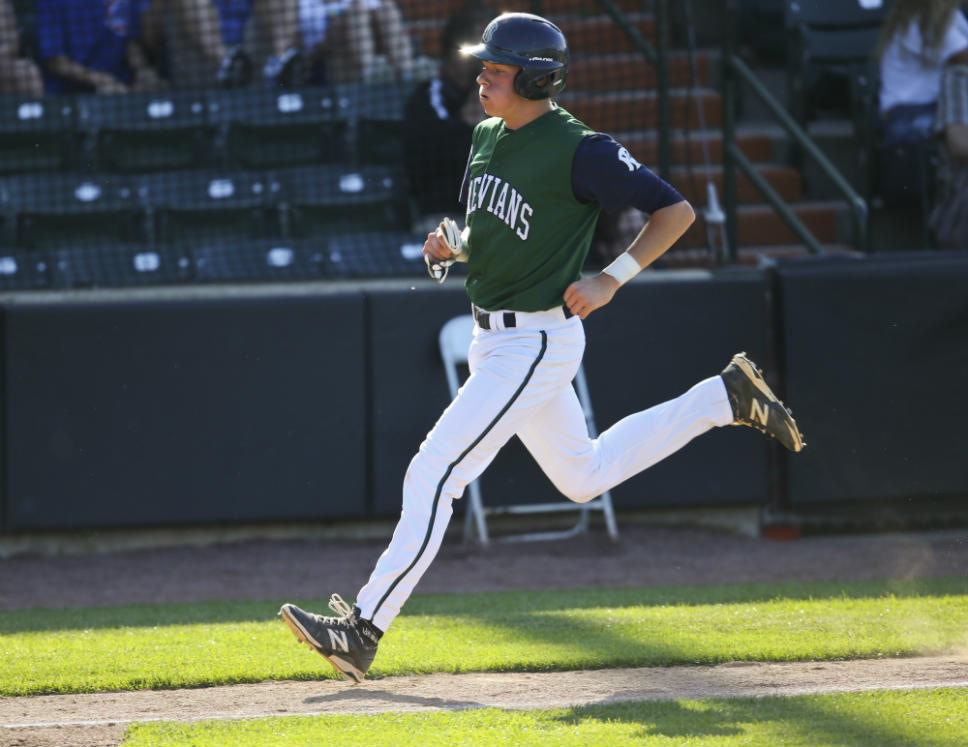 New Trier’s Matt Kann scores in the third inning. He hit a one-out double in the inning. PHOTOGRAPHY BY JOEL LERNER 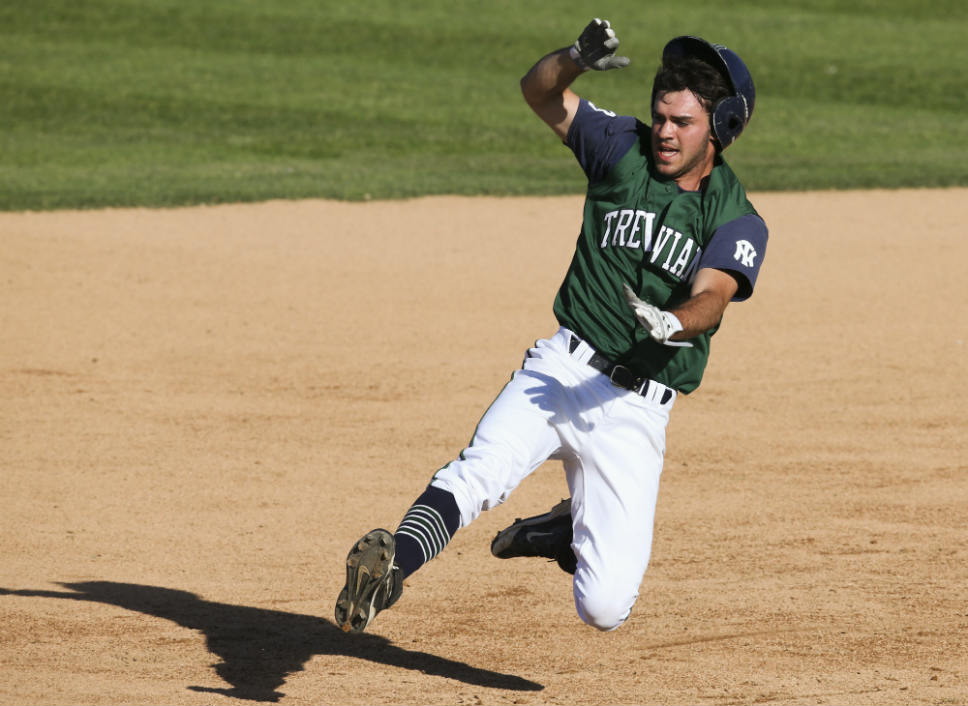 NT’s Michael Hurley slides into second as St. Charles North turns a double play in the top of the fourth inning. PHOTOGRAPHY BY JOEL LERNER 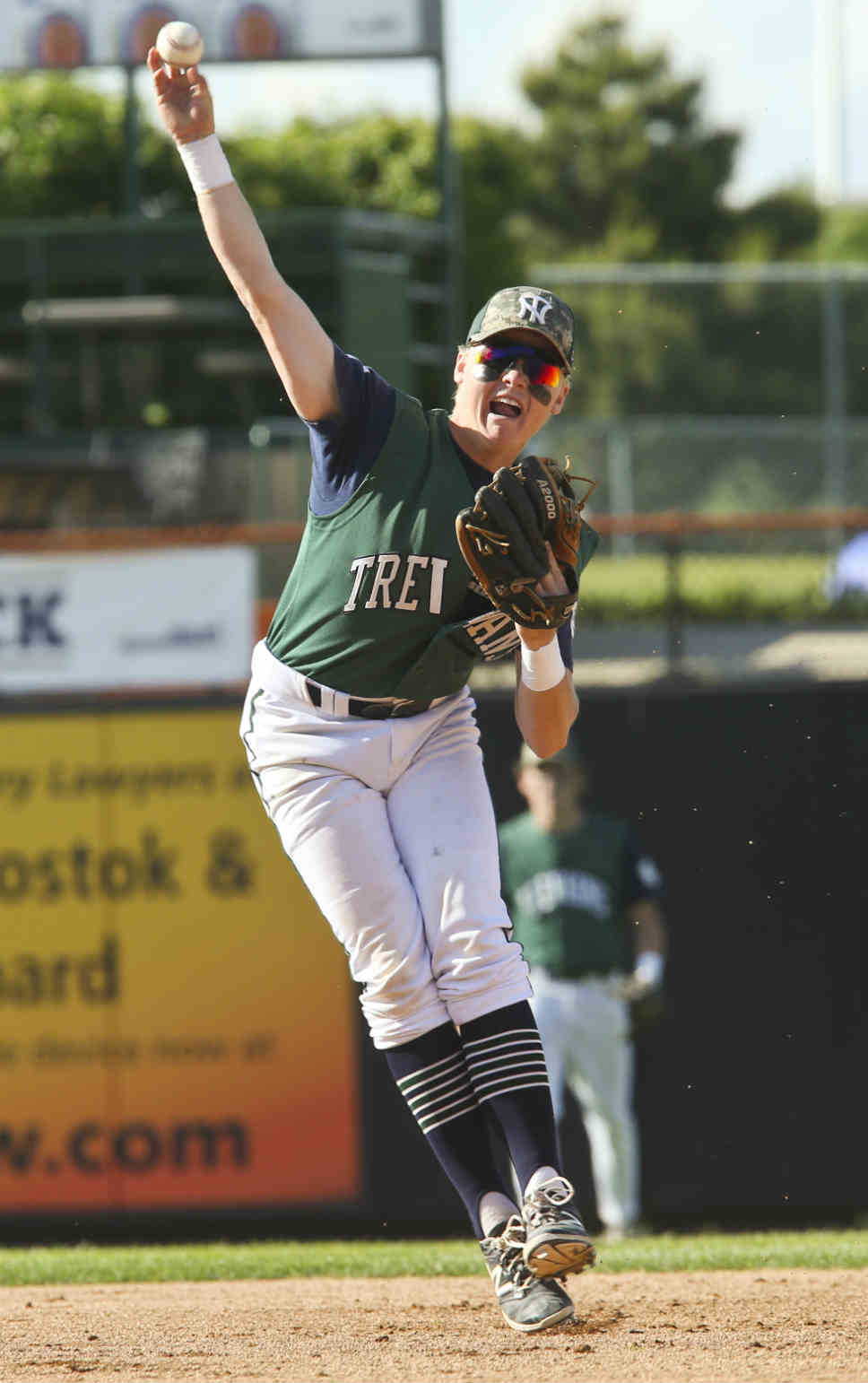 NT second baseman Will McNulty fires to first after make a backhanded stop up the middle in the fourth inning. PHOTOGRAPHY BY JOEL LERNER 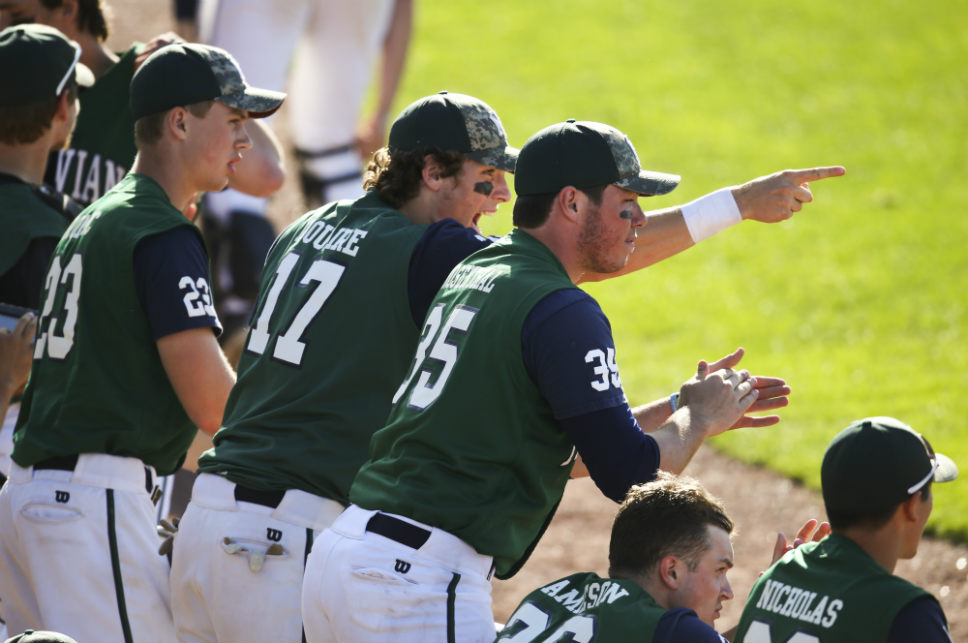 Justin Romic (No. 23), Sean Douaire (No. 17) and Max Rosenthal (No. 35) cheer on their teammates. PHOTOGRAPHY BY JOEL LERNER 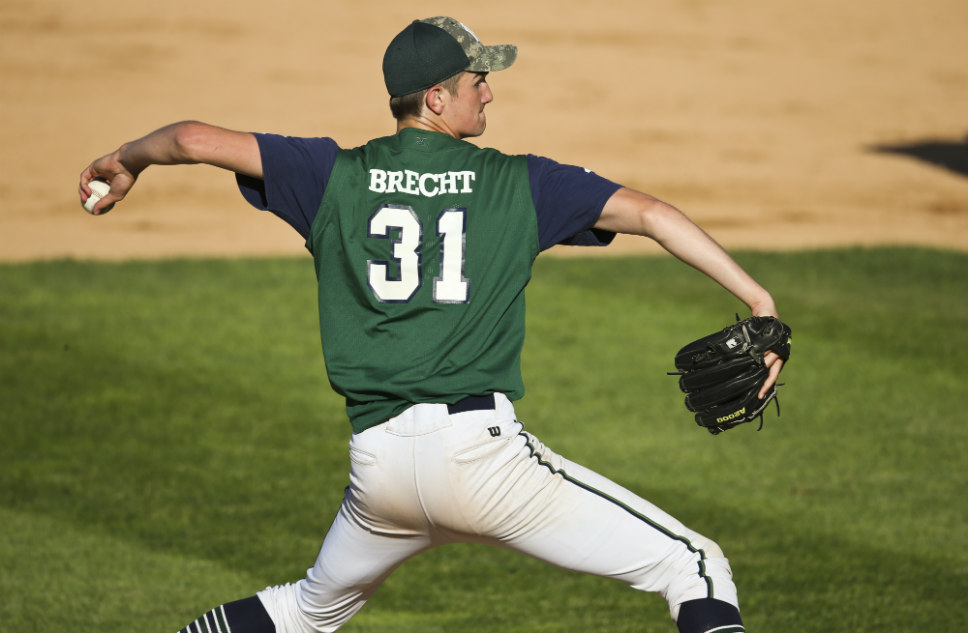 New Trier’s Ben Brecht delivers a pitch. He started and pitched into the sixth inning. PHOTOGRAPHY BY JOEL LERNER 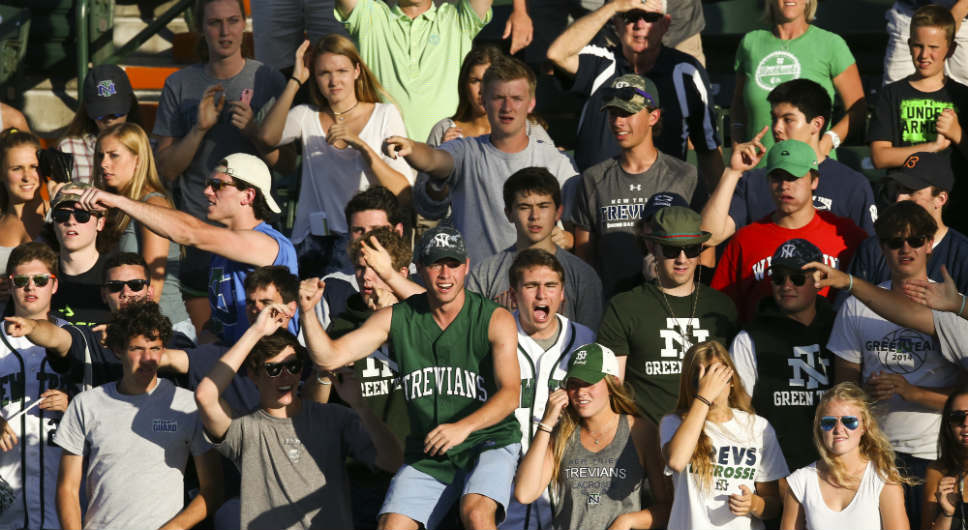 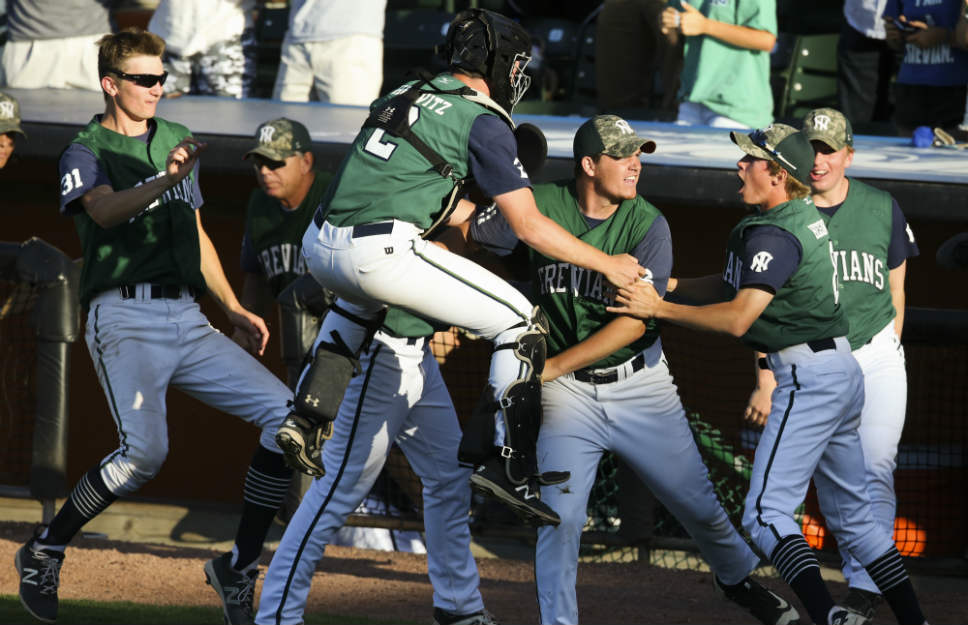 NT catcher Dylan Horvitz leaps for joy after Ryan Acri (third from the right) pitches out of a jam in the sixth inning. PHOTOGRAPHY BY JOEL LERNER 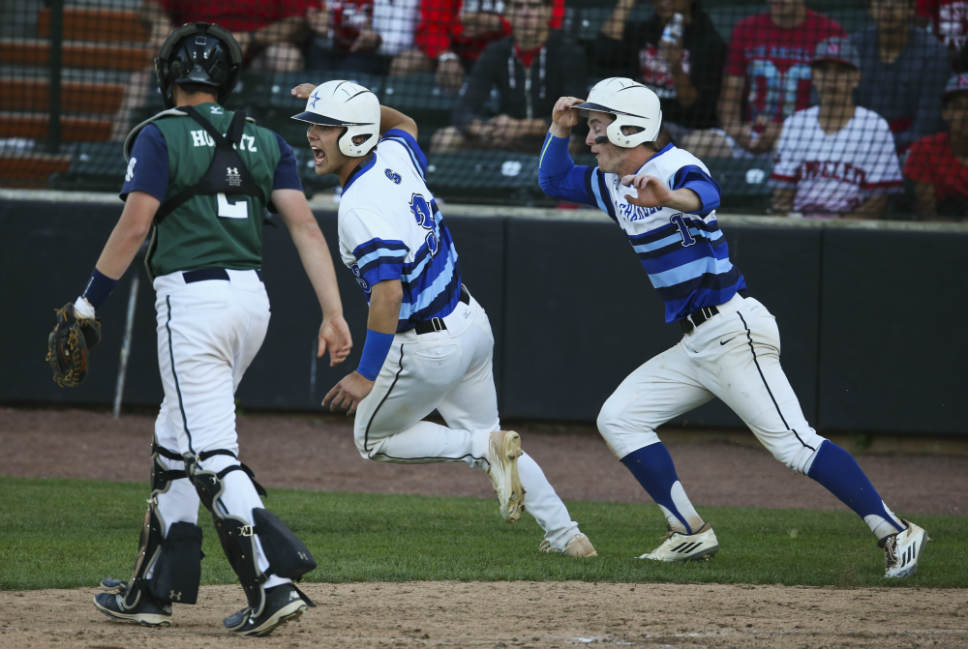 As NT catcher Dylan Horvitz walks off the field, St. Charles North’s Brendan Joyce (No. 3) and Zach Mettetal react after scoring the tying and winning runs in the bottom of the seven. PHOTOGRAPHY BY JOEL LERNER