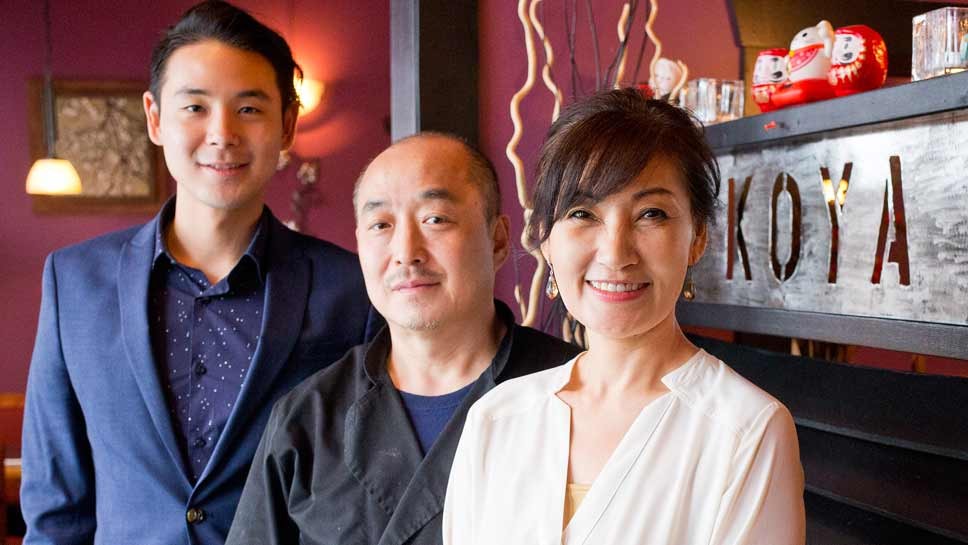 Jae, Hyung and Grace Kim own and run Koya in Highwood.
Photography by Joel Lerner/JWC Media

HIGHLAND PARK – Sushi lovers don’t have to travel far to partake in the creative touches and unlikely combinations that make the flavors pop at Koya. The family owned restaurant is located on the border of Highland Park and Lake Forest at 508 E. Old Elm Road.

Some of their specialties include Avocado Torch Roll, which is made with a spicy tuna base, drizzled in an eel sauce, and topped with a layer of crunchy tempura; Hawaiian Rolls made with tuna, avocado, mango; Bento Boxes filled with sushi and tempura dishes;  Combination Plates featuring tempura and teriyaki dishes; and many noodle dishes. 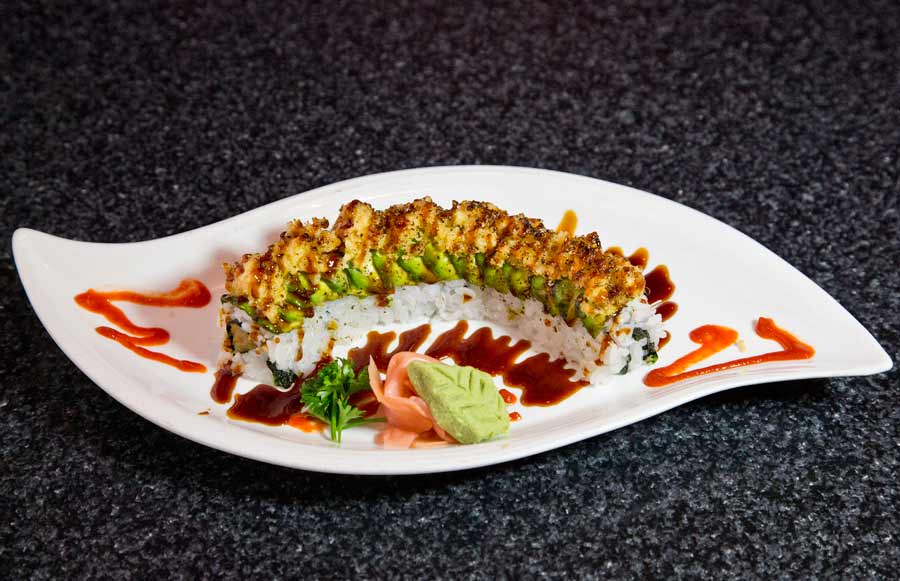 Kanas Roll, with cucumber an crab, at Koya in Highwood. Photography by Joel Lerner/JWC Media 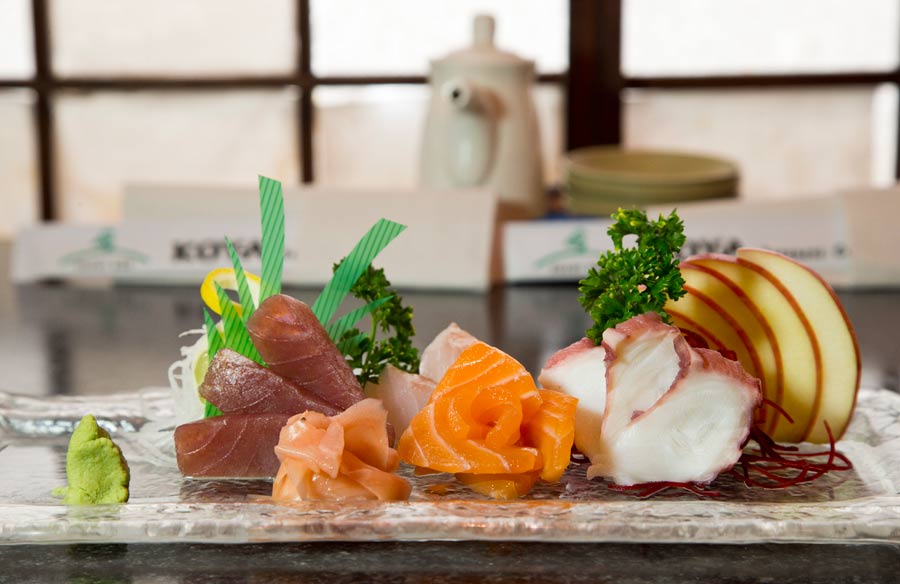 Jae Kim, manager, estimated about 40 percent of their customers order sushi, while 60 percent order rolls. The restaurant often sells 100 Avocado Torch Rolls per night on the weekends, he added.

But it’s not just about the food. The successful family business prides itself on providing good service to the clientele.

“My parents’ model is without the customers we wouldn’t be here, and they never thought that our restaurant was going to be this big,” said Jae Kim, manager. “We have a customer that’s been coming here regularly since we opened 10 years ago, and we try to show our appreciation to each customer.”

Kim said that once they get to know customers, they treat them like family.

Kim’s father, Hyung Kim, left his family in Korea to come to the United States around 1998. “My dad thought he saw a future in sushi, so he learned to become a sushi chef,” said Kim.

Two years later, Kim and his mom and sister said goodbye to their grandparents and other relatives in Korea to start a new life with Hyung Kim in Lake Zurich. Kim was in junior high school at the time and his mom, Grace, was an aerobic instructor in Korea who studied ballet and modern dance.

Kim was 12 and his sister Kalim was 9 when they arrived in the states. “At first, it was really difficult for both of us to learn the new culture and new language, but we had such great teachers and friends who helped us in so many ways,” he said. “It was only a matter of time that we fell in love with the culture.” He and his family are proud to be U.S. citizens.

While working at Hana Japan, which later became Koya, his dad noticed that the restaurant wasn’t attracting enough business. He felt this was due to the “inconsistency of the food quality and the service, but realized it had potential,” said Kim. “So after he took it over, he and mom worked really hard to provide the best quality food and service.”

In 2005, Hyung Kim and his wife Grace took over Hana Japan, and renamed it Koya, which means mountain in Japanese.

Koya always stocks up on large portions of fresh raw fish. “We use 15 or 20 pounds of tuna in two days,” said Kim. “We also get salmon and Dad always picks out the best quality vegetables too.”

The dishes are known for their alluring presentations. “My dad loves to make it pretty, and is very particular about keeping everything clean,” said Kim.

Each entrée comes with miso soup and a special dessert of vanilla cookies with a hint of chocolate and mochi ice cream, a small, round dessert ball consisting of a soft, pounded sticky rice cake (mochi) formed around an ice cream filling.

“My mom loves kids and started giving out ice cream to them and decided to make it complimentary to all of our customers,” said Kim. 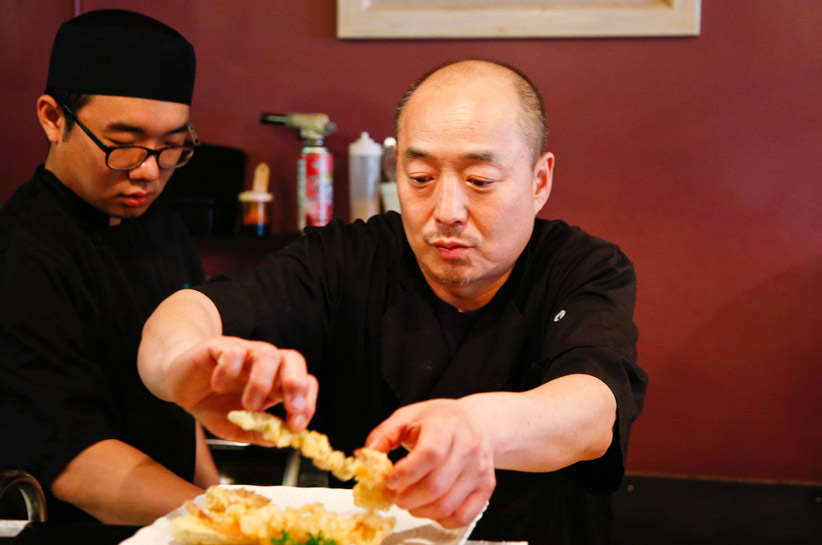 Kim said the restaurant used to be about half of the size with only six or seven tables. The family expanded Koya two years ago when they took over a vitamin store. The original section includes a few tables and an intimate sushi bar where diners can see Chef Kim preparing creations, while the expanded new section offers seating options for romantic date nights or family gatherings.

Koya also does a large takeout business, and is open for lunch. Other tenants in the strip center include a dry cleaner, and an Il Forno Pizzeria, which is conveniently located across from the Fort Sheridan train station, and bike path.

Due to the popularity of Koya in Highland Park, the Kims opened another restaurant Koya in Wilmette, about a year and a half ago next to the Wilmette Theater at 1116 Wilmette Avenue. Kim runs that location, while his sister is the assistant manager at the Highland Park restaurant.

Long waits can be expected at both restaurants on weekends so it’s best to call ahead or visit: Koyasushi.com.