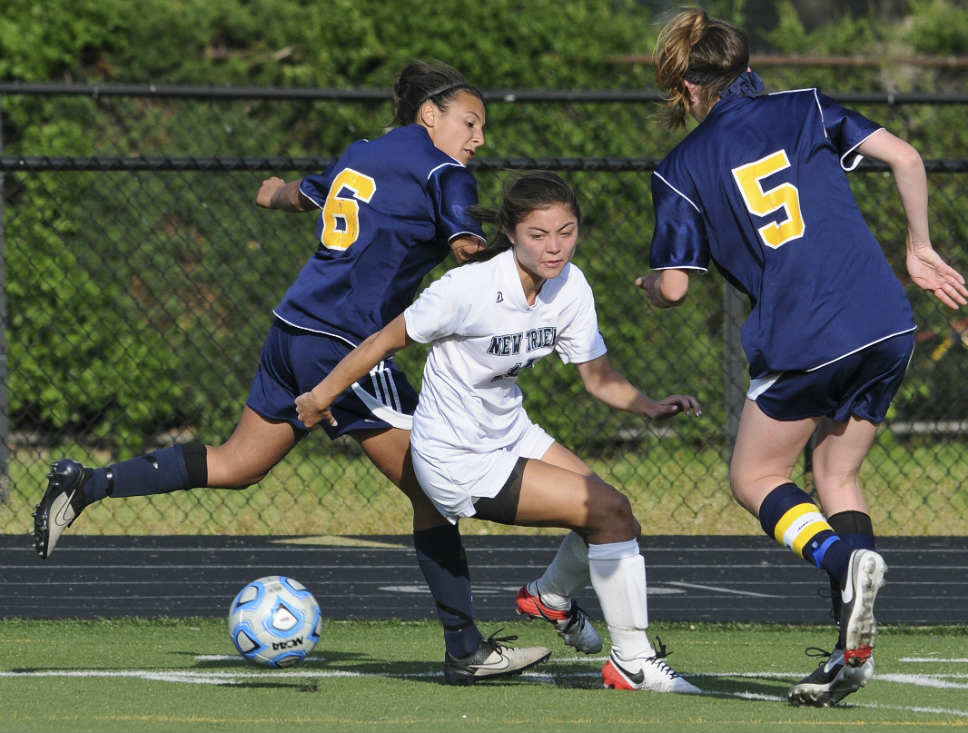 New Trier’s Haley Yamada (middle), seen her going up against Glenbrook South’s Cassidy Price (No. 6) and Anne Brennan (No. 5), has amassed 11 goals and eight assists this season. PHOTOGRAPHY BY GEORGE PFOERTNER

When Haley Yamada plays The Beautiful Game, scoring pretty goals is not exactly her aim.

The unsung New Trier senior soccer player, holding an ice pack under her left eye following her team’s 3-0 win over Evanston in a Class 3A sectional final game at Maine South on May 27, is more about just getting the job done. She’s not looking to score in beauty-pageant style.

“My goals,” Yamada confesses, “are more of the scrappier kind. They’re not the prettiest.”

But like garbage points in a basketball game, they count.

Yamada got one to count in the win over Evanston. Her goal off a corner kick rebound with 27:33 left to play in the second half gave the Trevians a 3-0 advantage. That score basically put the game out of reach.

“Sometimes, [garbage] goals are the most important ones,” says NT midfielder Bina Saipi. “Scoring that third goal against Evanston was huge.”

Yamada, who plans to play club soccer at Northwestern University in the fall, has had her share of big strikes this spring. She heads to the New Trier Supersectional on May 31 with 11 goals to go along with eight assists.

“Yes, she does pick up goals off rebounds, but there are no ‘garbage goals’ in soccer,” says NT head coach Jim Burnside. “I’d describe her goals as hard-working goals. She finishes runs. She anticipates well.”

Yamada’s game has come a long way in a short time. At the team’s recent banquet, she was named as New Trier’s Most Improved Player.

“Sophomore year, she would dribble the ball out of bounds more often than not,” Burnside says.

“Now she’s playing at a high level,” says the NT coach. “She can impact a game.

“She’s worked hard and put a lot of time and effort into her game,” Burnside adds.

“She’s grown into the player we expected her to be,” adds Saipi. “Over the past couple of years, she’s really improved her touch.”

Yamada has found a way to combine that touch with her speed.

“She’s extremely fast. She’s got great natural speed,” Burnside says. “But what has amazed our coaching staff is her touch.”

Which brings us back to the ice pack under his left eye. Yamada took a nasty spill late in that game, when the rain started falling.

But afterward, she felt no pain.

Waking up the next morning with a shiner was a distinct possibility.

“Graduation is over. So no problem,” says Yamada, with a broad smile. “I’m sure my mom will still love me. She’ll still tell me that I look pretty.”

Collisions with other players and turf marks have become badges of honor for Yamada.

“Haley is really tough,” says Saipi. “She’s got scrapes all over her legs and turf burns on her face.”

“She’s one of the scrappiest players on the team,” says Burnside. “She’s more than willing to sacrifice her body for the team.”

Notable: The Trevians, who won state titles in 2014 and ’15, will take on St. Charles North in the Class 3A New Trier Sectional on May 31 (7 p.m.). The winner advances to the state tournament at North Central College in Naperville on June 3-4. … St. Charles North defeated New Trier 1-0 in a PepsiCo Showdown game in April. … Illinois recruit Kelly Maday, the 2016 Gatorade Player of the Year, leads the 24-3-1 Trevians in scoring with 15 goals and 16 assists. DePaul recruit Bina Saipi has recorded 14 goals and 11 assists. The other scoring leaders include Haley Yamada (11 goals, 8 assists), Celia Frei (10 goals, 5 assists), Natalie Laser (7 goals, 4 assists) and Sydney Parker (7 goals, 5 assists).