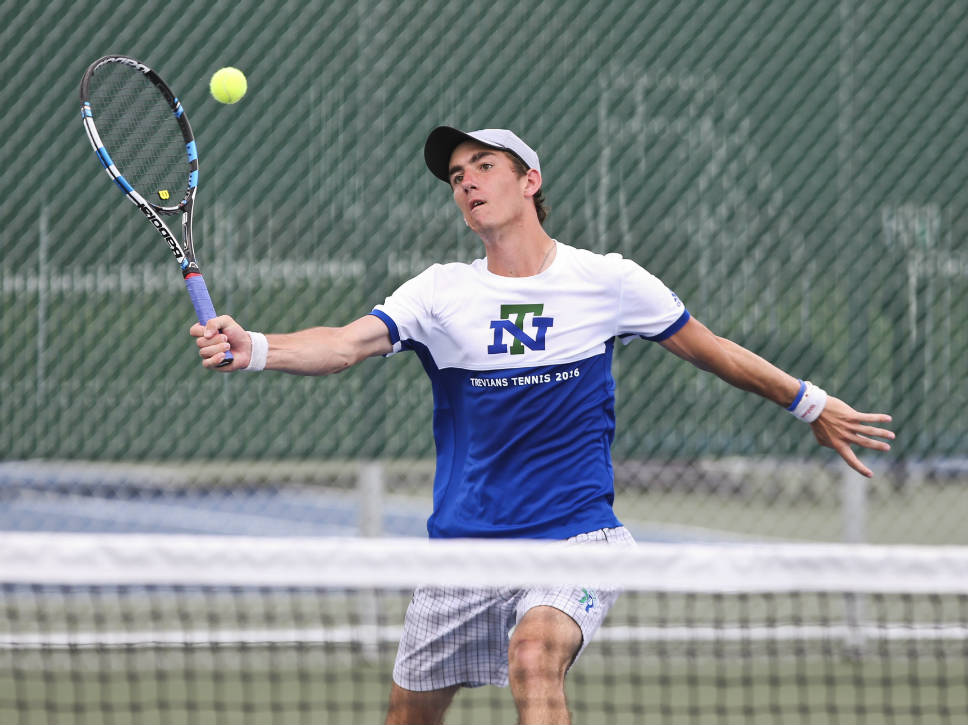 The state semifinal singles match had just ended. New Trier senior Scott Bickel, the victor, was no longer stoic, no longer all-business. The Trevian sprinted toward his vocal contingent of lime-green-T-shirt-wearing supporters sitting in bleacher seats and let out a series of celebratory roars from inside a tennis court at Hersey High School in Arlington Heights.

Animated and fired up, following his 6-2, 7-5 defeat of Glenbrook North junior Mark Wu on May 28, Bickel then plowed his 6-foot-2, 165-pound frame into a fence, ratcheting the volume of his rabid fans, now standing, their raised arms pumping.

“It was time to give them energy, the kind they had given me during the match,” Bickel said.

They had kept him loose throughout the match. He heard a certain chant, over and over, usually after one of his dainty drop shots or one of his laser winners.

Early in the first set, moments after a drop shot winner from Bickel had frozen Wu at a baseline, a young fan, post-applause, shouted, “That’s … above … average!”

It was wry and witty and wonderful.

The weekend, turned in by New Trier’s boys tennis team, could be summed up in three words: way above average. NT, behind Bickel’s state runner-up showing (he lost 6-2, 6-1 to Wake Forest-bound Vuk Budic of Deerfield High School in the final), captured its first state championship since 2011, its third under ninth-year coach Tad Eckert and its 21st in program history. NT netted 40 points, well head of runner-up and four-time reigning state champion Hinsdale Central (31) and third-place Deerfield (30).

“Team,” Eckert said of NT’s theme at state May 26-28. “It might not look like it, if you look at the team standings, but there was plenty of drama … we experienced a lot of it. I’m really proud of our seniors, who, in their final opportunity at state, cashed in. They worked hard for it, wanted it. Hinsdale Central kept hoisting that big trophy, year after year. It was our turn.

“We showed a lot of resiliency, and that was personified by Scott Bickel’s performance.”

Bickel, a 5-8 seed, faced second-seeded Brandon Ancona of Rockford Christian in a rain-interrupted state quarterfinal on May 27. Bickel lost the first set, 7-5. Bickel won the second set, 6-2. The third set got tight. Much was at stake, particularly for New Trier, because a state quarterfinal win is worth four team points, not two. Bickel took the clincher, 6-4.

“Biggest match of my life,” Bickel, resting before the championship final, recalled.

The win thrilled Eckert and Bickel’s teammates and Lime Green Nation. It had increased NT’s separation from Hinsdale Central in the team standings.

“It made dinner that night more fun and made all of us sleep better,” Eckert said.

Eckert (NTHS, ’90) and Trevians second-year varsity assistant coach Kevin Andersen (NTHS, ’88) were tennis teammates back in the day, helping the program win state titles in 1987 and 1988. Andersen coached Bickel during the state semifinal at Hersey; Eckert took care of coaching duties at another site. As Andersen sat in a courtside chair, watching Bickel battle a tireless Wu, he heard the cheers and the clever chants for the four-year state qualifier. The fans also expressed their love for … Andersen (Francis, apparently, isn’t his first name).

“Heart, all heart,” Andersen said after the semifinal. “That’s what got the win for Scott. I’m so proud of him, a four-year varsity player who loved representing his school. He competed against Wu, gutted it out, fed off the adrenaline he was getting from the crowd. He’s got good touch, all of the shots, and he wears opponents down with his consistency. Wears them out.

“I felt like a proud father out there today, watching his son.”

Another Bickel also produced points for the team last weekend. His name is Thomas Hunter Bickel, Scott’s twin. Tom lost 6-1, 4-6, 6-4 to eventual fourth-place finisher Mack Galvin of Rolling Meadows High School in the fourth round and won a match in the back draw, earning seven team points in six matches. The Bickels, as freshmen in 2013, went 4-2 at state as doubles partners. Each made it to state as singles qualifiers from 2014-16.

Their plan is to take a gap year before hitting tennis shots in college.

“So we’ll be the school that won the the first [boys] state title in Illinois and the last one [in a one-class system],” Scott said, aware the Illinois High School Association will run state tournaments for two classes beginning next spring.

New Trier senior Michal Kusznerko made the most of his only spring on varsity, teaming with sophomore Jeffrey Chen to place fifth in doubles. Knee surgeries had kept Kusznerko, who trained in Florida as an eighth-grader, sidelined from 2013-15. The tandem of Kusznerko/Chen might have pounded more shots than any other doubles team in the draw last weekend, winning eight of nine matches, many of them taut ones. They advanced via a tie-breaker (played in lieu of a third set) twice in the back draw and edged a pair from Peoria Richwoods 6-3, 3-6, 6-3 in the match for fifth place. Their lone loss in the championship draw? A three-setter, in the Round of 16.

“We had a tough time in our second sets,” Kusznerko said. “Jeffrey [the only non-senior on the state team], though, hit some unbelievable shots, unbelievable volleys. We call him ‘The Shotmaker.’ ”

NT senior twins Ricky and Wyatt Mayer reached the quarterfinal round in doubles. Reigning state doubles champs Chris Casati/Niko Wasilewicz of Deerfield bumped the Mayers to the back draw with a 6-3, 6-1 victory.

Raiders senior Blake Oslan won twice in the championship draw and once in the back draw at the state tournament.