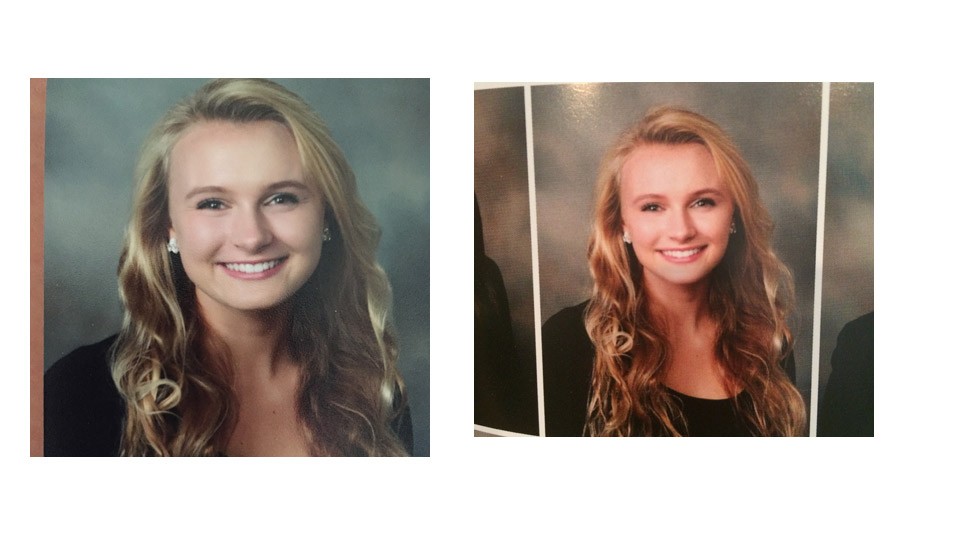 At left, Tara Tuohy in the photo she ordered; at right, the photo that appeared in the yearbook

“At least 50 people came up to me and asked about my picture,” Tara Tuohy, a senior, said. “It was not just me. Everyone was talking about it,” she added, speculating that many of the senior pictures were altered in the yearbook.

“When I first saw my picture I didn’t recognize myself,” Tuohy said. “Pimples were blotted out, my dimples were removed, my nose was smaller and they kind of shrunk my face.”

Most of the students interviewed by Daily North Shore who talked about the changes to the pictures were unwilling to give their names but one said, “They were so Photoshopped.”

The company that handled the pictures, Visual Image Photography (VIP), said changes were not intentional but rather an error.

“I do know that with the software we used some of these things can be done, but were not intended to be done for high school seniors,” stated Steve LaMaster, director of portrait studios for VIP, in an email to DNS.

LaMaster said software settings were set wrong by mistake and not corrected before the images were sent to the school.
“Our retouch supervisor missed these images after reviewing them before sending them to the school,” LaMaster said in the email. “The images that were exported for the yearbook had been reviewed multiple times and these images we missed by human error and were not corrected in one of our yearbook exports.”

VIP discovered the problem after hearing various complaints, including calls from Lake Forest and Lake Bluff families asking why there were differences between individual portraits purchased and what appeared in the yearbook.

Lake Forest High School yearbook advisors Melissa Doucette and Bridget Mobile said there was no retouching on the part of anyone at the school.

“We have been informed by VIP that there was an error in retouching some of the senior portraits,” Doucette and Mobile stated in an email to Daily North Shore the morning of May 31. “Lake Forest High School does not retouch or edit the portraits. We will be working with the company and families regarding this issue.”

Tuohy said the pictures in the yearbook would tarnish some memories of her time at Lake Forest High School. She said she would like to see it redone. “That would be nice,” Tuohy said. “This is what I’m going to see when I look back at my yearbook picture and remember what I looked like.”

A remedy may be in the works, according to LaMaster.

“We are in talks with the school to come up with a solution for those students that come forward to our studio,” LaMaster said in the email. “For all of the years we have done senior portraits for yearbooks we put a very mild retouching over every image. That has been the trend in the industry for a long time.”

VIP did not hesitate to take responsibility when it learned about the errors, according to LaMaster. He said there could be changes in the future to prevent a repeat of what happened at Lake Forest.

“We are truly sorry for this error,” LaMaster said in the email.” This was never our intention. We take a lot of pride in our work. We have been working with Lake Forrest High School for several years. We feel very sorry for any ill feelings for the students, and (there) was never any intention on our part at VIP.”

On Tuesday night, LFHS sent a letter to parents stating that VIP is identifying the students whose photos were altered and will work with their families to remedy the problem.