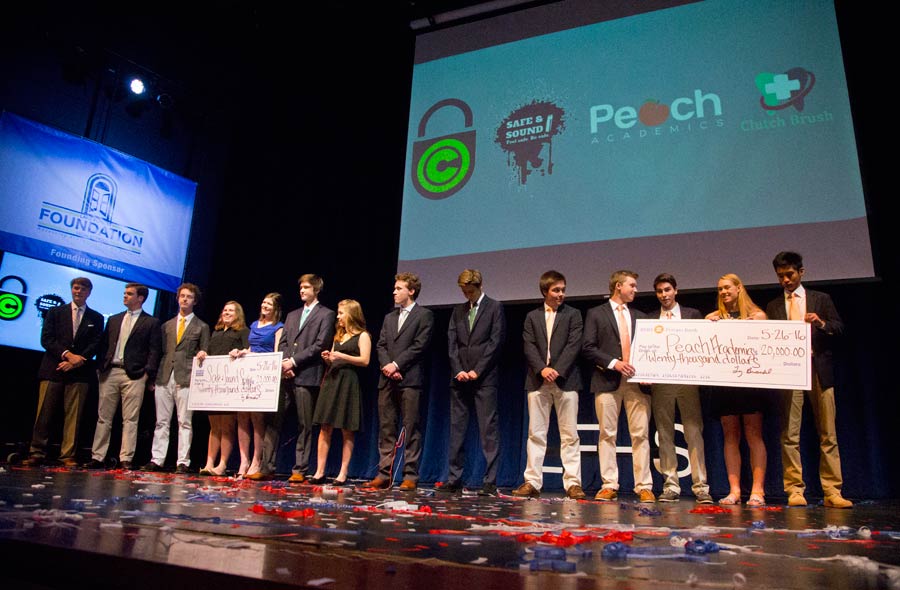 LAKE FOREST/LAKE BLUFF — Before the confetti settled on a team of five Lake Forest High School business incubator winners and their $20,000 check, everyone got a surprise.

There was another winner, more confetti and a second $20,000.

A student-created business providing online peer tutoring for high schoolers, and another offering protection against sexual assault, successfully pitched their ideas to members of the investment community May 26 at Lake Forest High School. The goal was to obtain funding to further develop their ideas next year as seniors.

The second annual pitch night was the culmination of the year-long business incubator class where juniors work in teams with local coaches and mentors from the business community to develop their own company.

Before they made their pitches, all the young entrepreneurs knew was all or none of them could be funded, according to Joe Pulio, the teacher of the class along with the coaches and mentors. He said if any were funded, they would spend their senior year developing their business for school credit and as much profit as they could generate.

When the night started, four of the 11 companies from the class were selected to pitch their business to 15 potential investors, who asked questions after the pitches were complete. Then the panel members retreated during a 25-minute intermission to decide whether to open their checkbooks. The first winner was already thinking about the future after getting the news. 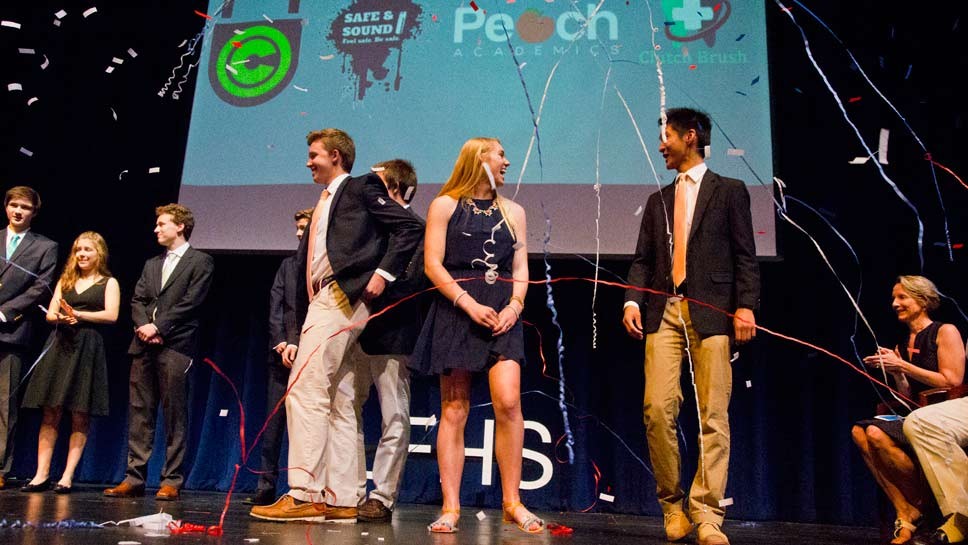 “We’re going to start working with our software to get it ready for the (next) school year,” Cameron Litzinger, a member of PEACH, said after getting the news and posing with his teammates for numerous pictures.

PEACH develops computer software enabling students in need of peer tutoring at any hour to find it online, according to Annabelle Capstick, another team member. They were already planning their next moves after getting the news.

“We’re going to talk to the (high school) principals in the area and try to sign them up,” Brandon Rancap, a third part of the group, said.

While the other three teams were congratulating PEACH, the lights dimmed and Larry Potash, a WGN-TV news anchor and the evening’s master of ceremonies, came to the microphone again.

Potash said Safe & Sound, had persuaded investors it too was worthy of $20,000 of their collective money. For Jenelle Frevert and Gwen Driscoll, two of the company owners, it was time to push the start button.

“We’re going to call the manufacturer and tell them to get started,” Frevert said of their device, which can set off an alarm and blast pepper spray at a potential attacker.

“We’re going to call our (15) preorders and let them know,” Driscoll added. 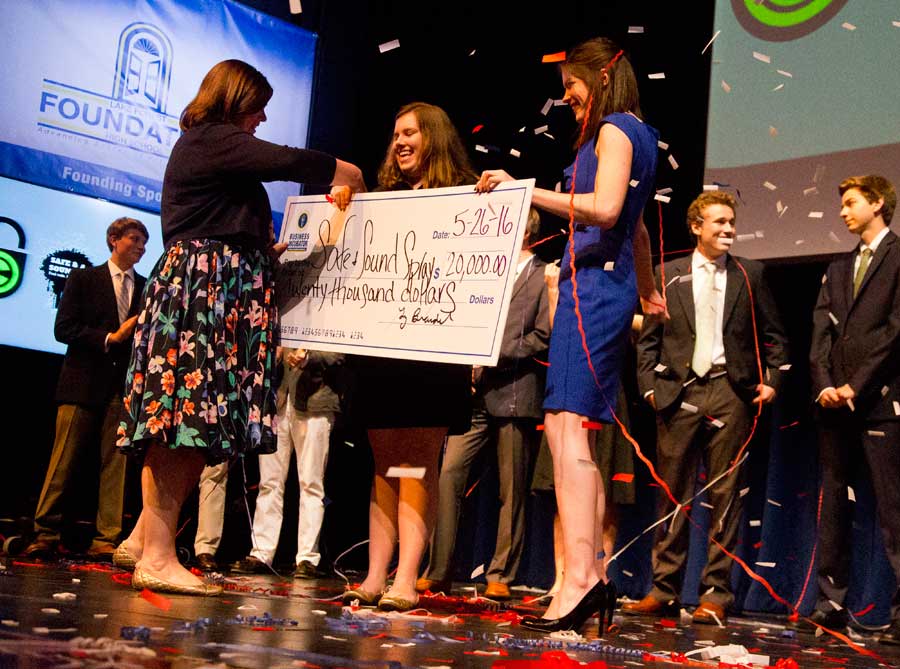 Jenelle Frevert and Gwen Driscoll react after hearing their team received a $20,000 investment in Safe and Sound.
Photography by Joel Lerner/JWC Media

The investors were not participating to give as a charitable act. Each team told them during their presentation how much cash they needed during the next year and what the company was willing to give in return.

“For $18,500 were offering 10 percent equity,” Capstick said. “That will be a 300 percent return in three years,” she added referring to calculations projected on a screen behind her. The investors added another $1,500. The final terms of the deal was not disclosed.

The group of potential investors was not passive. They wanted to know whether intellectual property was protected, how market research was conducted beyond what was disclosed in the presentation and how pricing was calculated. With Safe & Sound, one questioner asked if there were auxiliary batteries as well as the automatically rechargeable ones. 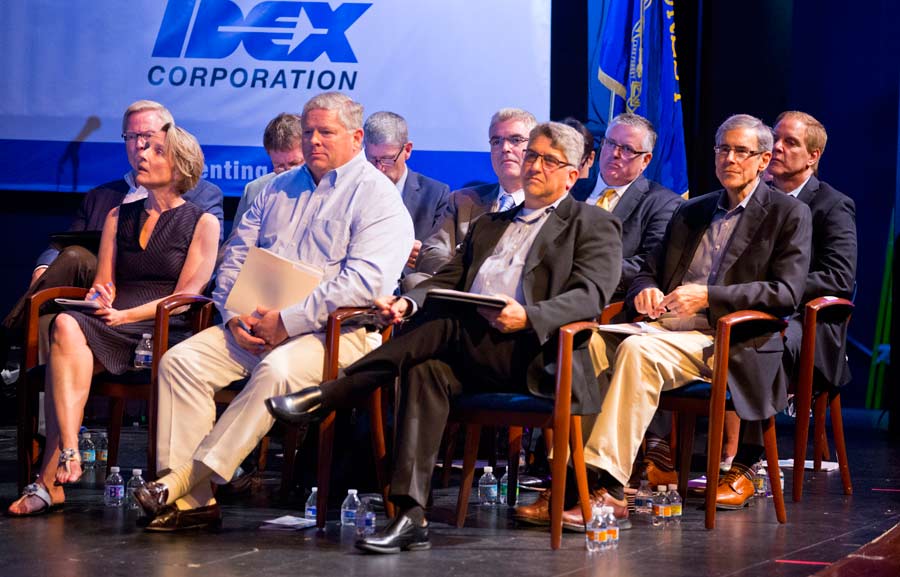 The potential investors listen to the presentations.
Photography by Joel Lerner/JWC Media

“No,” Frevert said. “We wanted to keep it lighter and easier for people to hold. It has to fit in a purse.”

Other members of the Safe & Sound team are Santiago Luque, Isabella Ponterio and Brian Stickler. Joining Litzinger, Capstick and Rancap on PEACH are Jon Day and Leo Spano.

The other two finalists were: 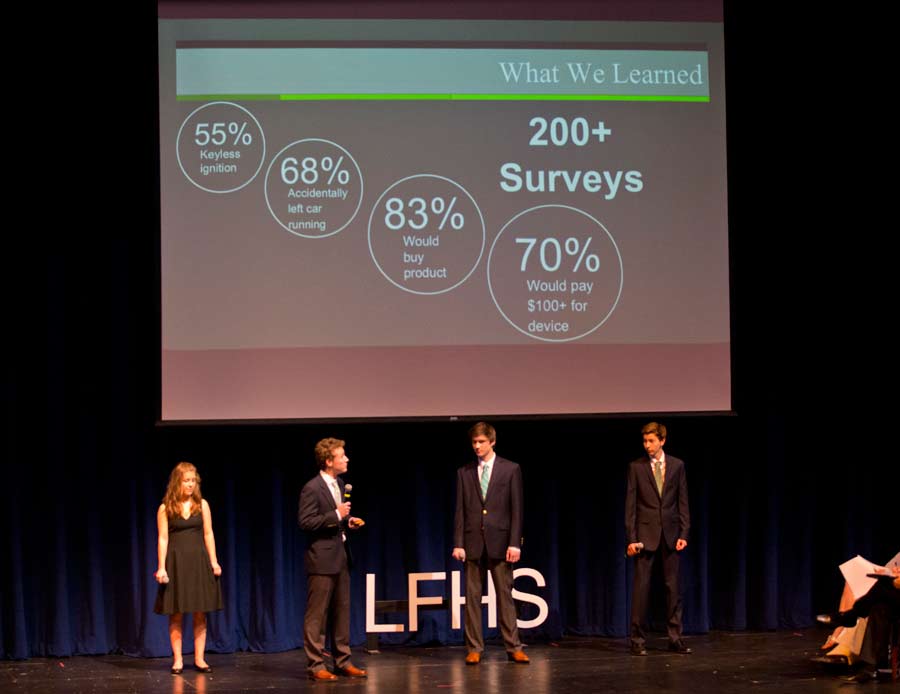 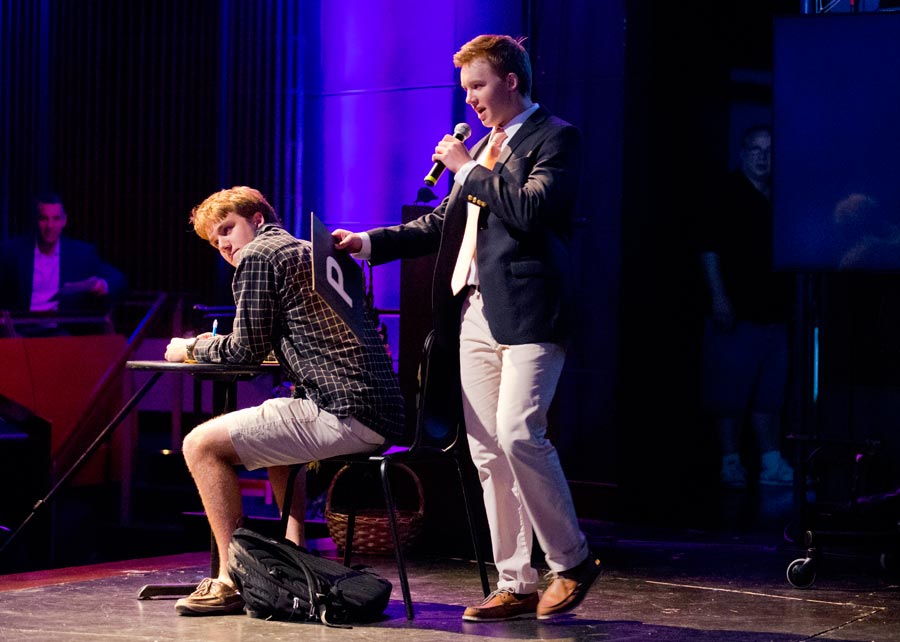 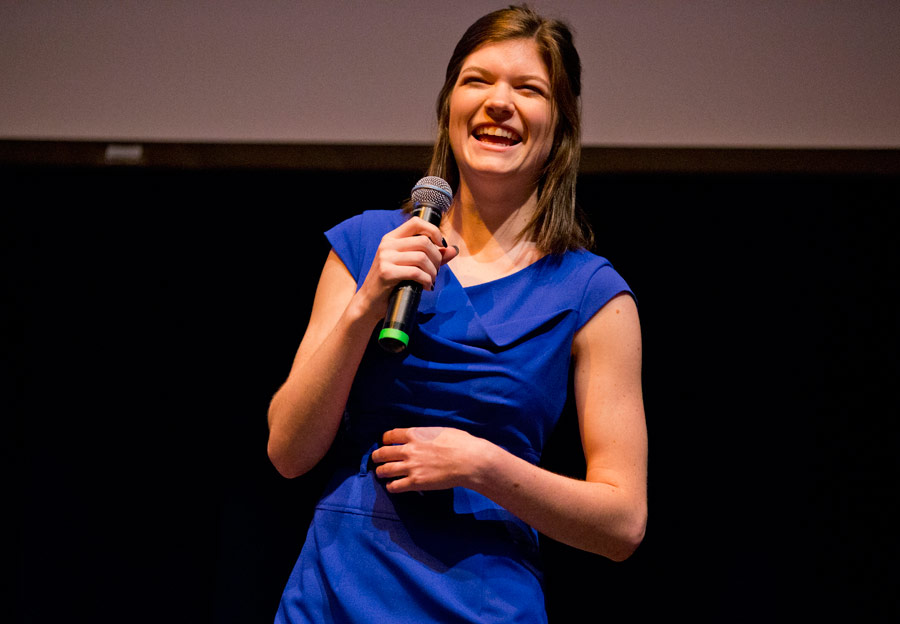 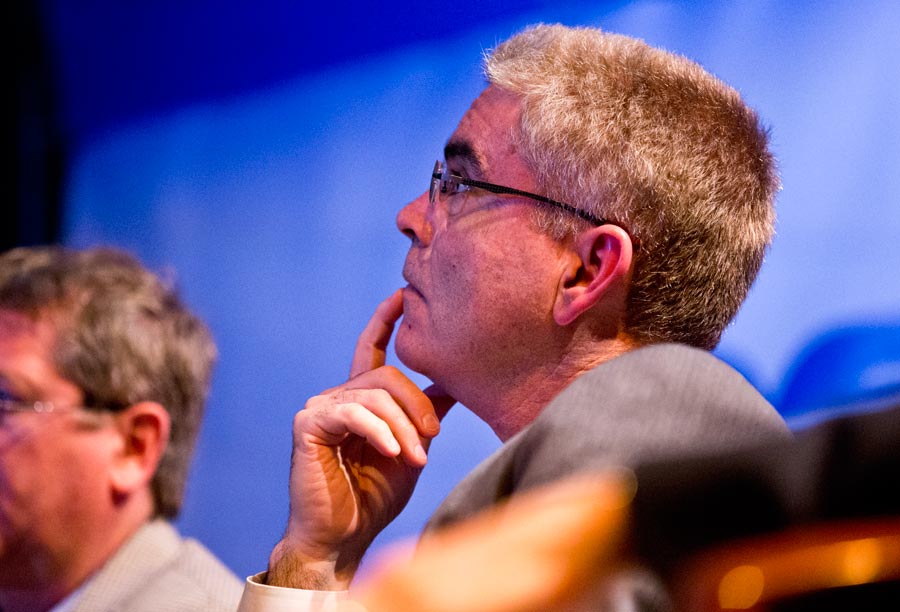 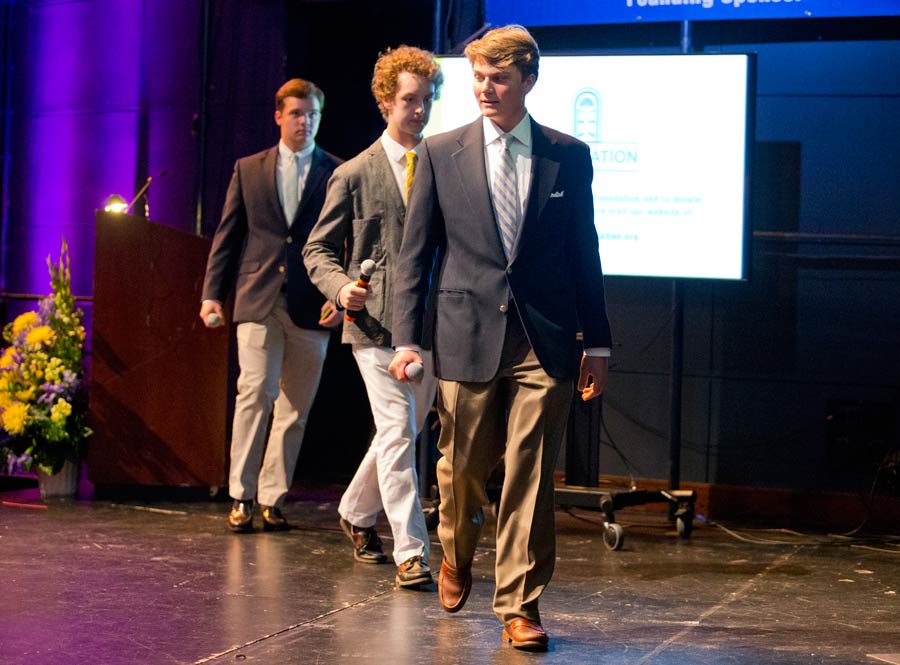 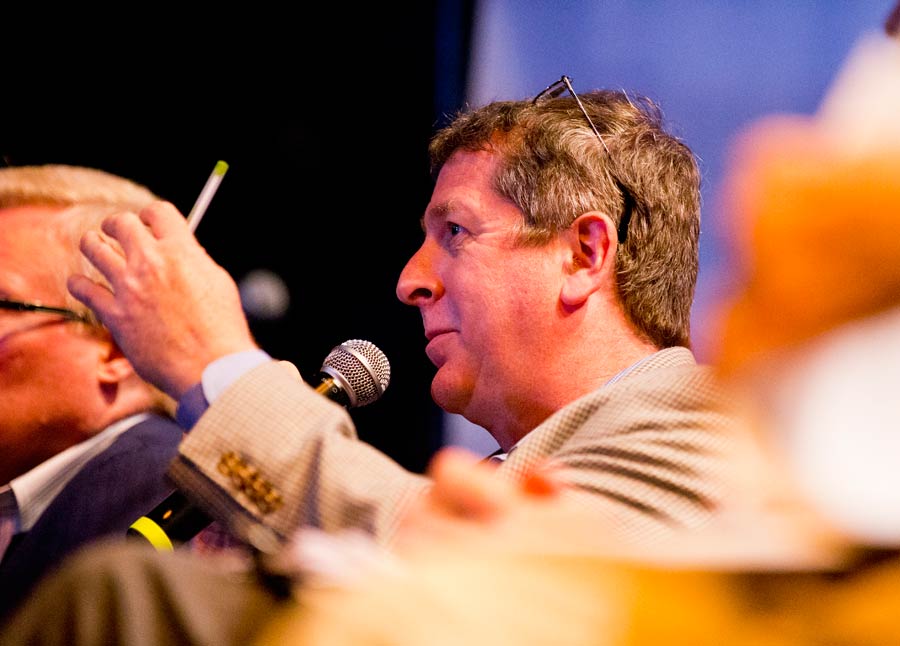