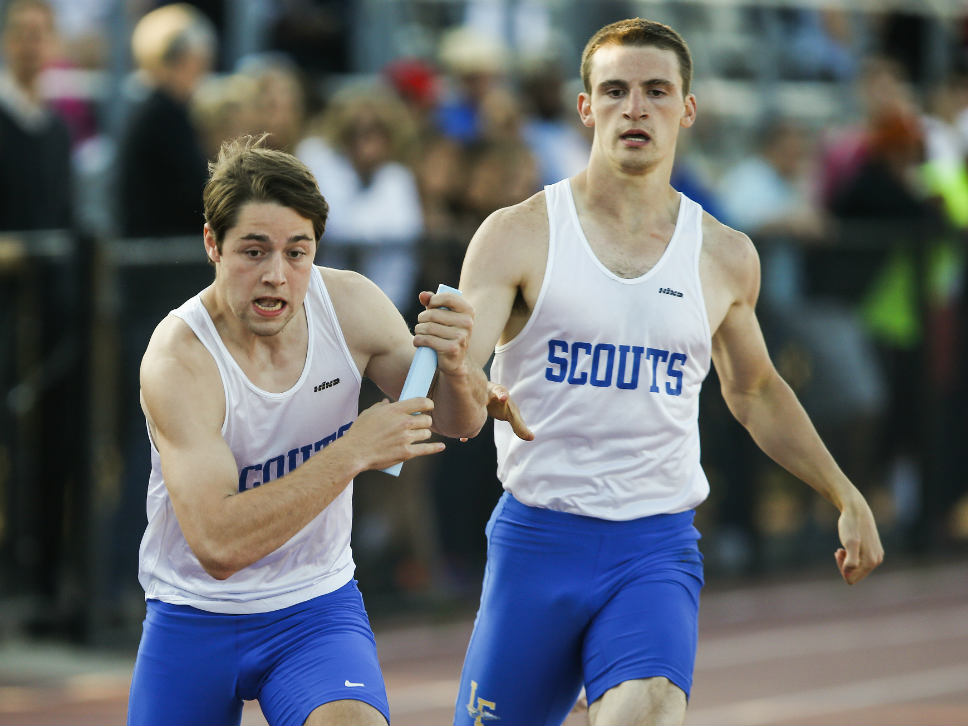 LF’s Jonathan DiValerio makes an exchange with Christopher Meng in 4×400 relay at the sectional meet at Loyola Academy. PHOTOGRAPHY BY JOEL LERNER

John Brumund-Smith is never quite sure where things might go conversationally, when he huddles with his high-spirited and highly talented sprint corps.

Those pre-race chitchat sessions on the infield grass can get a little wacky.

They can get kooky. Unpredictable.

They can go in a lot of different directions.

Brumund-Smith, resident fun guy and head track and field coach for the Scouts, says there are “no boundaries” with this group.

And you get the feeling that Brumund-Smith wouldn’t want it any other way. He likes his sprinters loose and loquacious.

“It’s better to go into a race that way than to be super nervous,” Brumund-Smith, a former sprinter and relay runner, adds.

Besides, these guys can get serious in a snap. Put a baton in their hands and the smiley face goes away.

It all started with a first-place finish in the 4×100 relay (42.15), when the foursome of Mick, DiValerio, Meng and Julian caught batons darn near perfectly and blasted right past two higher seeds in Wheeling (42.76) and Evanston (43.03).

“Our guys are perfectionists when it comes to handoffs,” says Brumund-Smith. “And that’s how you get people.”

The Scouts also qualified to state in the 4×400 relay by smashing their own school record. Meng, DiValerio, Julian and Mick cruised the four laps in 3:20.30 to earn runner-up honors behind Evanston (3:18.82).

There’s work still to be done.

The school record in the 4×100 (42.06) has eluded them — thus far. The Scouts hope to rectify that on the bright blue oval at Eastern Illinois University in downstate Charleston, when the state meet commences this weekend.

“It will be a fast track,” says DiValerio. “We’ll be gunning for it.”

Having the Mighty Quinn — Julian — anchoring the 4×100 and 4×200 definitely is working in LF’s favor. The senior knows how to get to the finish line. He knows how to take it to the house. As a star running back/receiver/kick returner for the LF football team in the fall, he scored 30 touchdowns.

Meng also proved that he could be trusted with the pigskin. He joined Quinn on the all-North Suburban Conference football team. The senior, who is headed to the University of Iowa, is even more sure-handed with a baton.

“I get out of the blocks pretty well,” says Meng, who also took fifth in the long jump (personal best 21-2) at sectional.

“We spent the season figuring things out,” he adds.

Mick, a soccer player in the fall, gave up a chance at individual glory — he beat the state cut in the 400 meters (50.13) with his fourth-place showing (49.82) at the Lake County Meet on May 6 — to concentrate solely on the relays.

“Mick is pretty dang fast,” says DiValerio, a defensive back on LF’s football team. “The kid is a freak in the 400. He’s having an insane season.”

“Yeah, the football guys let me,” says Mick, cracking a smile. “They let Begley [a starting guard on the LF basketball team] in, as well.

“I love these guys,” Mick adds. “We’re just competitive guys who love to run. We push each other to get faster.”

The camaraderie thing has been special. And it comes complete with a nickname.

“Everyone knows us as The Squids,” Mick says. “I really don’t know how that came up.”

But it has stuck.

According to DiValerio, the moniker can be traced back to a fellow sprinter, junior Chase Horvat.

“In football, the defensive backs were known as The Sharks,” says DiValerio. “He wanted [the sprint corps] to have something similar.”

And, of course, Brumund-Smith is all in.

His efforts at Loyola were gutsy, considering that he continues to deal with a hamstring injury. The Iowa recruit hasn’t practiced since the first outdoor meet.

“He’s significantly the fastest kid in the bunch,” says Brumund-Smith.

Which definitely is saying something — with this group.

Notable: The Scouts placed third (51 ½ points) behind Evanston (85) and Prospect (80) in the 16-team field at Loyola. There were some tough moments. Senior distance ace Mark Myers took fourth in the 3200 (9:27.76) and missed the state cut by three seconds. … Senior Stephen Mathew, a state qualifier last year, finished in a tie for fifth in the high jump (5-11). He needed a 6-3 to advance. Sophomore Landon Edwards took fourth (6-1). 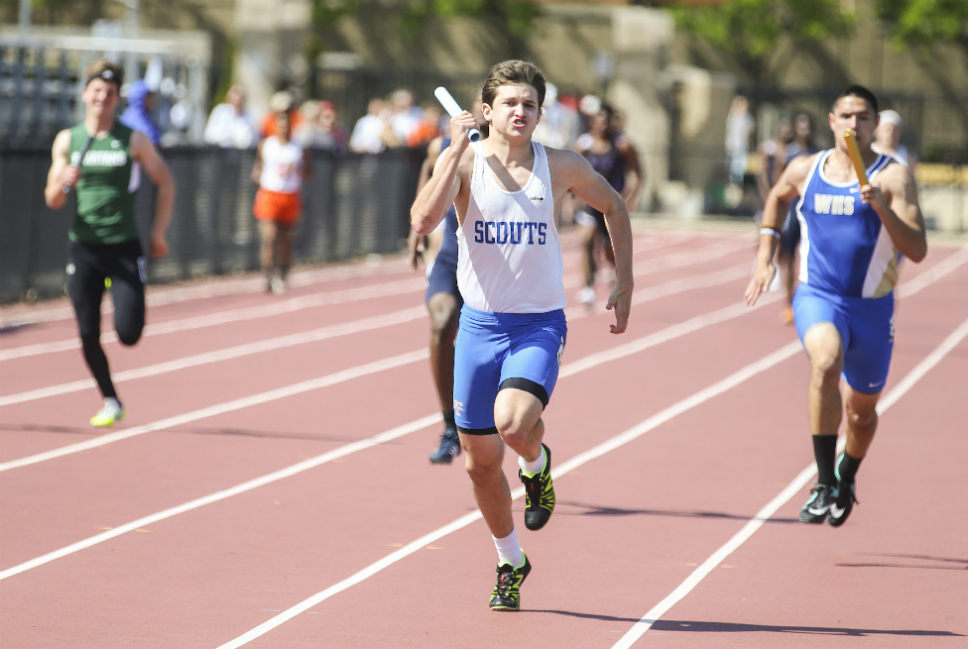 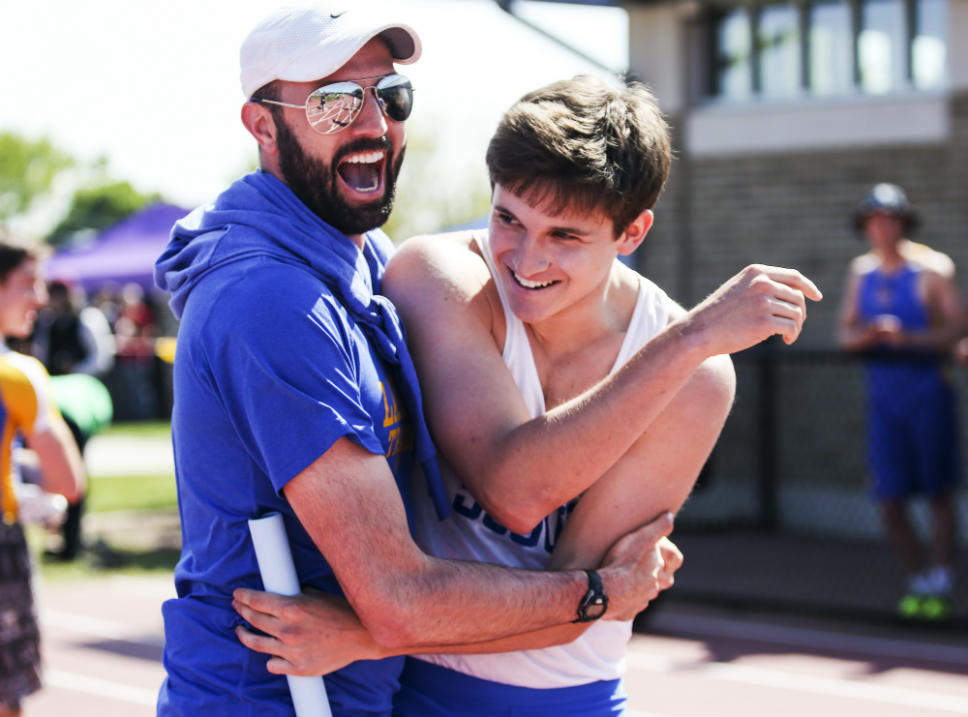 Lake Forest’s Quinn Julian is grabbed by coach John Brumund-Smith (PLEASE after the Scouts’ won the 4×100 relay at the sectional meet. PHOTOGRAPHY BY JOEL LERNER 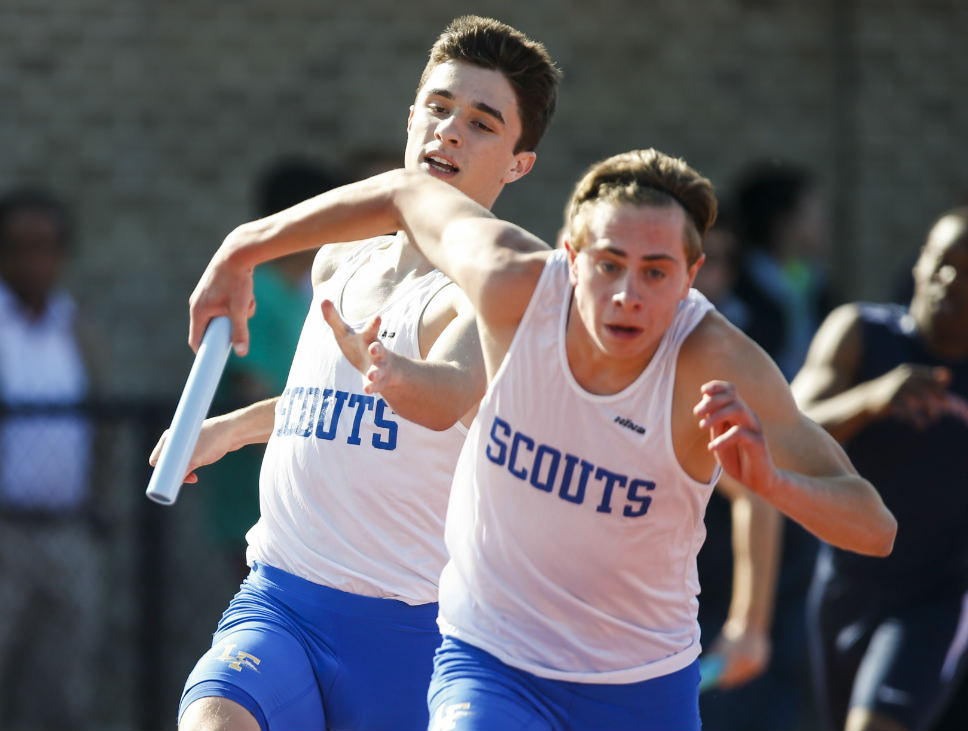 Matt Begley (left) makes an exchange with Matthew Mick in the 4×200 relay. PHOTOGRAPHY BY JOEL LERNER