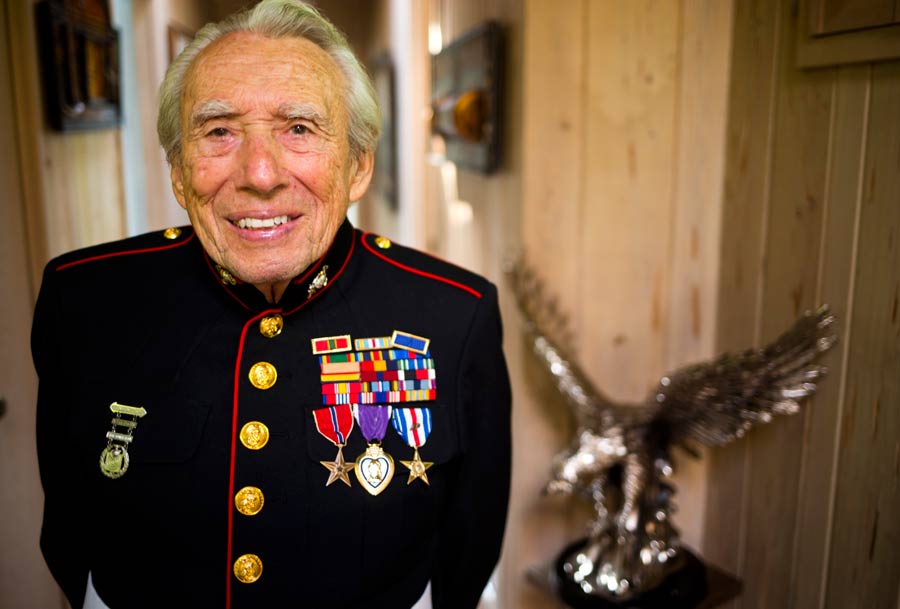 HIGHLAND PARK – Larry Klairmont was awarded two silver medals in World War II before he turned 19 and was inducted in the Chicago Association of Realtors Hall of Fame on the cusp of his 89th birthday. Klairmont will be 90 in December, and the semi-retired Highland Park businessman still remembers his service as a flame thrower in the Marines like it was yesterday.

The 60-year Highland Park resident won his first Silver Star Medal for being a flame thrower on the island of Saipan in the Mariana Islands in the western North Pacific Ocean.

“Because I was small I was a good candidate to be a flame thrower,” he said. “I had to get within 50 to 100 yards to be effective, and I blew them away with six grenades as they came out. … I was lying belly down and I took the grenades out, pulled the pin out with my teeth and they say I wiped out about 150 or 200 Japanese with the hand grenades. Then I crawled over one of my combat companions who had been shot and killed with an automatic rifle and I blasted everything I could.”

Klairmont remembers hearing over the radio that the Japanese attacked Pearl Harbor, killing 3,000 United States servicemen. “I was infuriated with the Japanese and wanted to get even with them, so I enlisted two years later at 16,” said Klairmont.

According to Klairmont, because he wanted to be a fighter pilot, he contacted the Navy and they had what was called a V12 program that took outstanding candidates and put them on a waiting list to become pilots.  Although he never graduated from high school, he passed the tests and was approved to be on the V12 waiting list, which meant he was officially in the Navy Air Corps.

Klairmont said he wanted to be a fighter pilot but was never called up because they took the candidates with college degrees first. While he was in the Navy Air Corps he went to radio school to become a radio gunner and also learned Morse code.

After gunnery school, he was sent to the Pacific where his ship was hit by a kamikaze.

“When we got hit by a kamikaze one of our pilots crashed into the counting tower, and the plane immediately burst into flames,” said Klairmont. “The pilot was half unconscious and strapped in, so another man and I reached in and grabbed him. Though we were both badly burned, we pulled him out of the cockpit and saved his life. For that I received the Captain of the Vessel Accommodation Ribbon.”

“We had the kamikazes, which are somewhat similar to what we’re experiencing today with suicide bombers, but it was a different time and a different era,” said Klairmont.

When the ship returned to Pearl Harbor for repairs, Klairmont was stuck at a desk job.

He said he told the commanding officer, “Sir I joined the Navy to be a fighter and I’m sitting behind a desk. This is not the way I want to fight the war.”

Two days later he was on a troop ship to an unknown destination, and that’s how he became a U.S. Marine. Then the young men found out they were going to an island called Saipan.

“The Japanese were waiting for us up in the hills and we’re down on the beach,” said Klairmont. “It was all sandy and rocky; you couldn’t even dig a foxhole. The Japanese were picking us off like popcorn. We had over 4,000 men killed in Saipan in three or four days. Luckily I didn’t get hit and I continued advancing.”

The next stop was Iwo Jima. “Being able to see or feel what’s coming is one thing, but in the service the greatest fears are the things that you cannot see, like a mortar shell, or a booby trap,” said Klairmont. He has many tearful memories of the friends he lost in the war. “It’s pretty tough having someone’s head blown off right next to you. A mortar shell is devastating.  Iwo Jima was the bloodiest battle in warfare.”

The Japanese were ordered not to take any prisoners; they jumped over the men who were laying in fox holes trying to shoot the Americans, he said, adding that he and his men were hidden in those fox holes and shot them in the back while they blindly ran over the Marines. 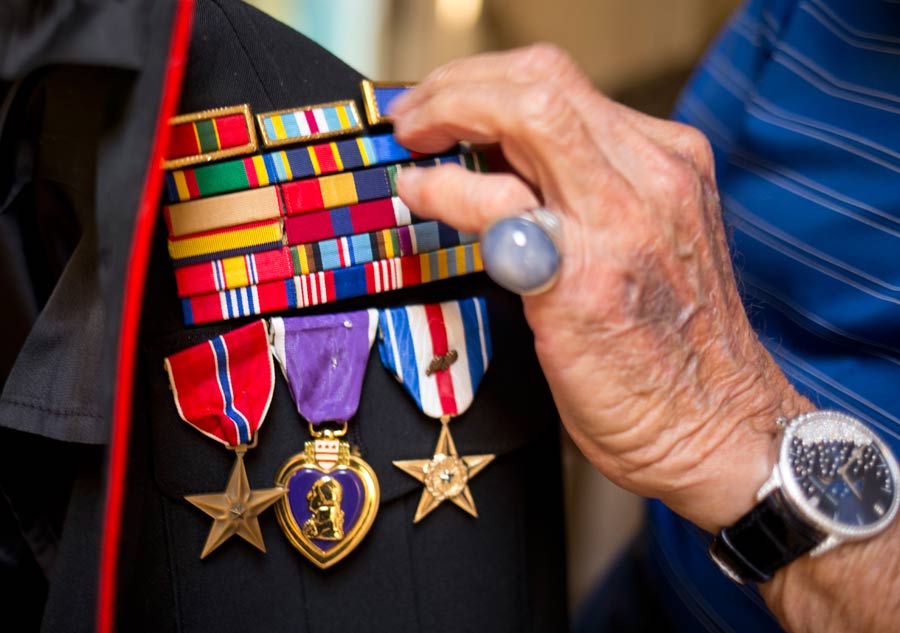 Klairmont straightens the cluster on his Marine uniform, which includes a Silver Star, Bronze Star and Purple Heart. Photography by Joel Lerner/JWC Media

Klairmont was awarded his first Purple Heart for his service in Iwo Jima, when he had mortar shrapnel in his knee and kept on fighting. He also didn’t let a bayonet wound in his neck slow him down.

Klairmont said enemy soldiers killed two lookout guards, and he was sound asleep when he heard a rustling. Then he saw the enemy with a bayonet rifle coming right at him in the fox hole.

“I had a .45 in my hand and a carbine in my lap, and as he came at me, I turned my head and he got me in the neck,” said Klairmont. He missed my jugular by about a quarter of an inch. I rolled over, got off two slugs and emptied my carbine in him.  I’m bleeding profusely and my men put a tourniquet around my neck.”

He took the shooter’s weapon and still has his “souvenir” today. He received a second Silver Star Medal, a Bronze Star Medal and another Purple Heart.

Klairmont’s courage continued after the war ended. His stepfather passed away while Klairmont was enrolled at DePaul University College of Law, so he went into the dry cleaning business to support his mother and learning disabled sister.

Klairmont explained that in the 1950s there were five dry cleaning companies in Chicago, most of them run by Jewish people who came from Europe to avoid persecution from the Germans in the 1930s. “They were very smart, very shrewd, and they worked out a deal with the Teamsters,” said Klairmont.  “No one could take an account from anybody else. My second store was on the corner of Division and State, and it was a gold mine. When the plant owner died, his wife called me, and asked me to take over the business.”

After three months he had picked up about 12 accounts. One day an unfamiliar man came to see him, invited him outside, and stuck him in the back seat of a limousine in between “two gorillas.”

He told Klairmont that he was infringing on the rights of his Teamsters by taking accounts away from them.

Klairmont said, “This is the United States of America and I fought for this country so we could be free. I suggest you let these gorillas kill me right now, because I am going to continue taking these accounts.”

Three days later they set one of Klairmont’s delivery trucks on fire, he said, so he went to see the attorney who represented the five plant owners. 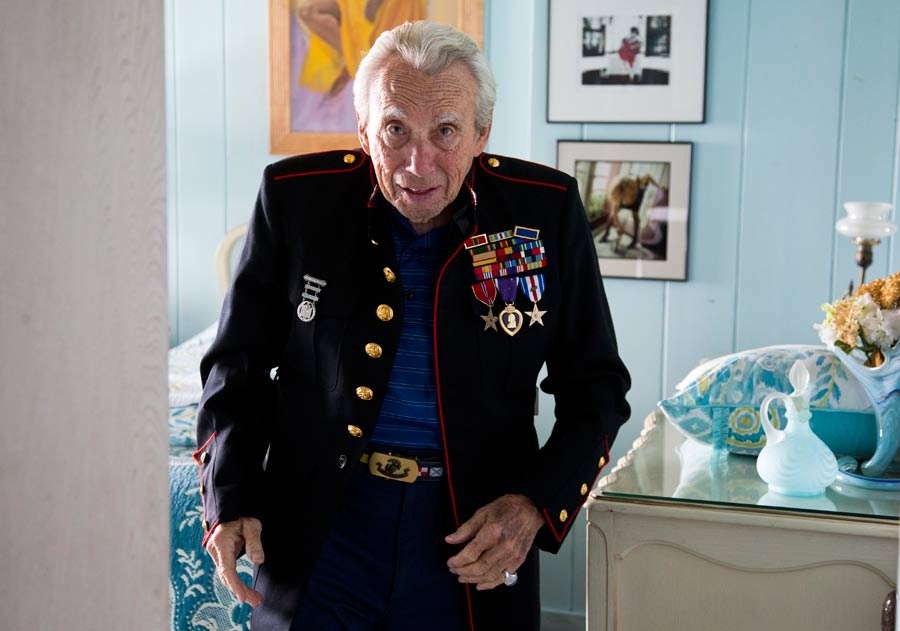 Getting ready for the photo shoot.
Photography by Joel Lerner/JWC Media

“I put my gun down on his desk with a $100 bill next to it,” said Klairmont. “I told him that we were going to do one of two things. You and I will take this $100 bill to have a nice lunch, and you will call off the gorillas. I cocked the gun and put it right in his face. I was trembling from being so angry and I said, if you don’t want to do that I’m going to blow your head off, pick you up, and I’ll throw you out the 10th story window.”

Klairmont started the Imperial Realty Company after he sold Imperial Dry Cleaning. “I thought Imperial was a classy name,” he said.

About 50 years ago, shortly after Klairmont built his home in Highland Park, he noticed a sign in the window of a real estate office next to the Highland Park Theater. He saw a big picture of a building on the southwest corner of Central Avenue and Second Street, which is the current home of Bluemercury.

He said to his wife, “The best corner in the whole town is for sale and I’m buying it. The building was in the same condition as when it was built in 1882.” It’s one of the oldest buildings in Highland Park and Highland Park High School held classes on the second floor from 1887 to 1902.

Klairmont made major renovations to the building, and a clothing store moved in.

“After it was finished, I got the highest rent in the history of the Central Business District,” he said. “The building paid for itself in almost three years, and that’s how I started in the real estate business.”

Today, Imperial Realty “owns more property in the Central Business District in Highland Park than any other company,” said Klairmont.  He and his son Al, who runs the business, were honored last fall when they became the first father and son to be inducted in the Chicago Association of Realtors Hall of Fame.

Klairmont has five children, 12 grandchildren, and one great-grandchild. His son Bob is vice president of Imperial Realty, and his grandchildren Julia and William are the third generation of Klairmonts to join the family business. Klairmont has been with his fiancée Joyce Oberlander for seven years. She recently accompanied him when he was honored at the WWII Museum in New Orleans. 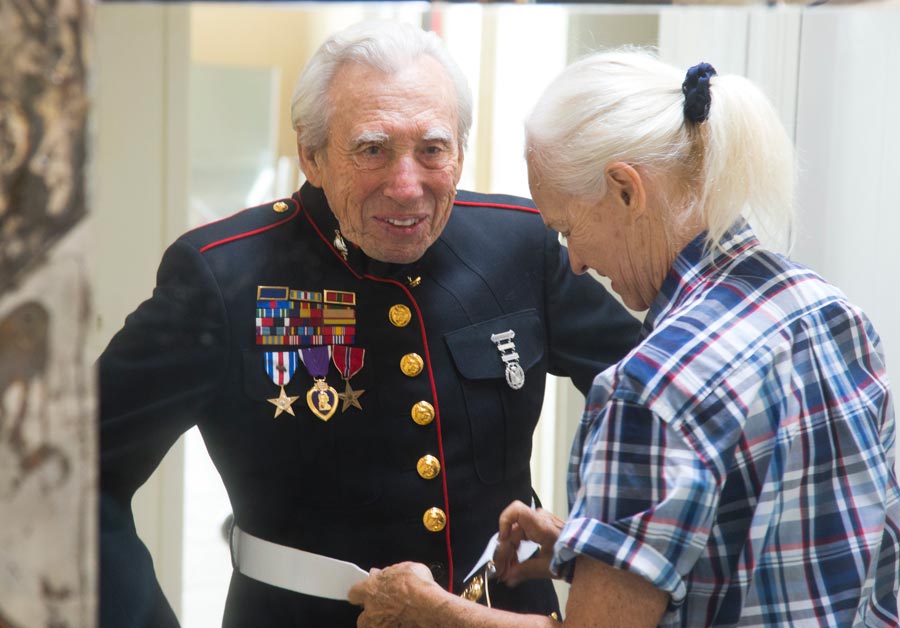 Joyce helps him get into uniform …

Klairmont said there’s been a tremendous resurgence in honoring WWII veterans. In the middle of 1945 the U.S. had 16 million men who had served. In 2016, less than one million WWII veterans are still alive.

“They’re dying at the rate of 700 a day, which means that in less than five years most of us will be gone,” he said. “I’m pushing 90. I was a guest of honor at the WWII Museum. It was so worthwhile to have people remember.”

This year marks the 75th anniversary of Pearl Harbor. According to Larry Sassorossi, commander of American Legion Highland Park Post 145, there are 20 WWII veterans living in Highland Park, and they will continue to be celebrated throughout the year on Memorial Day (May 30), Flag Day (June 14), Independence Day (July 4), Veterans Day (November 11) and Pearl Harbor Day (December 7). 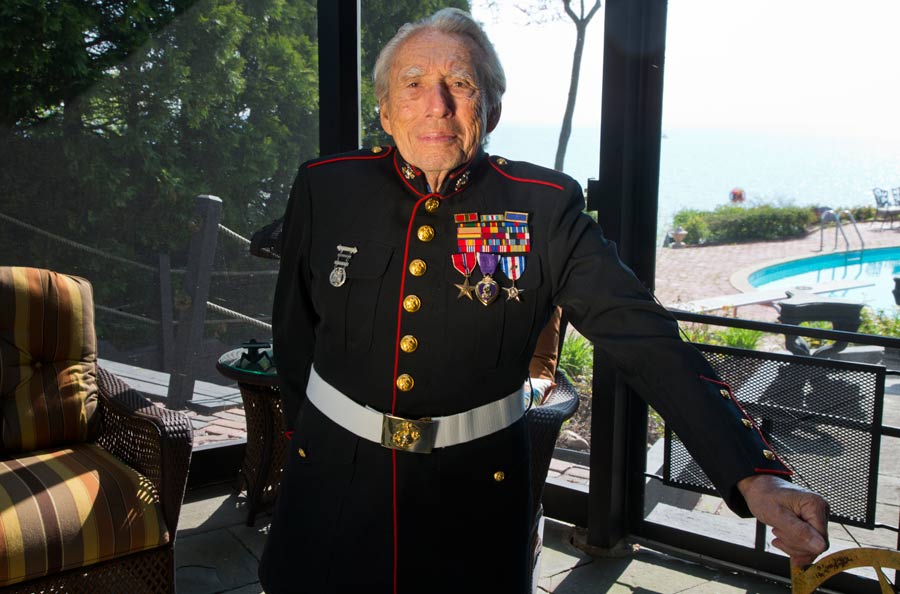 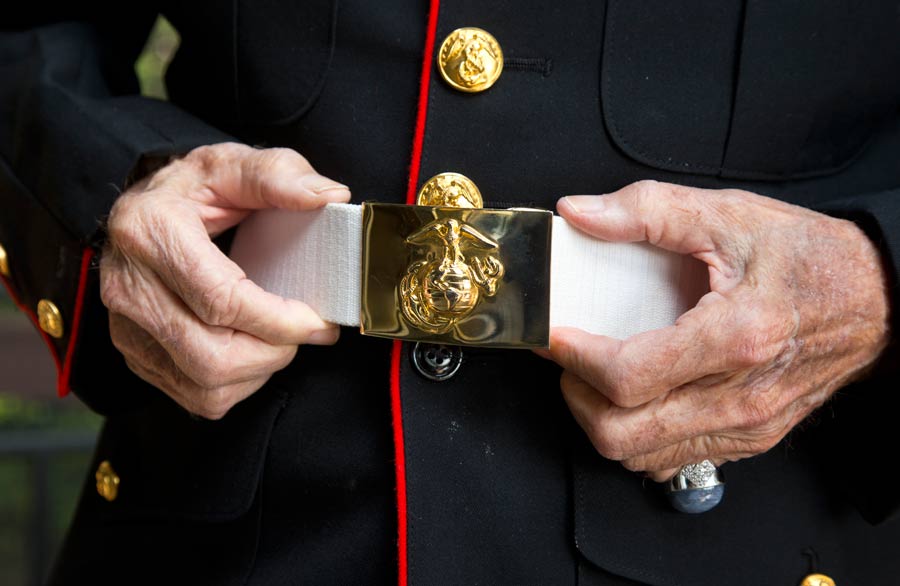 Klairmont straightens the belt on his Marine uniform.
Photography by Joel Lerner/JWC Media