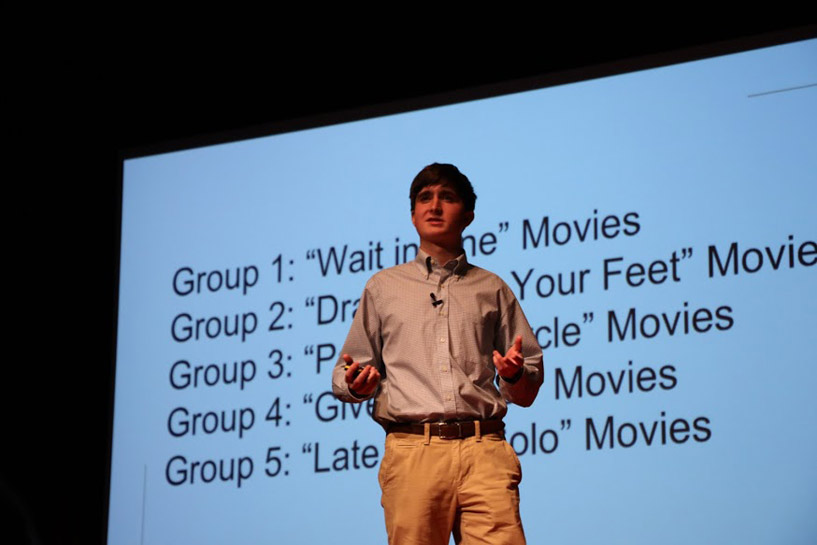 Tommy Block talks about movies during TEDxLFHS at the Gorton Community Center.

LAKE FOREST — When students at Lake Forest High School gave TEDx presentations on topics from classical music to caring for the mentally disabled, they learned surprising things about each other.

Tommy Block, a junior, was one of 17 presenters both from the school and community at large for the second annual TEDxLFHS, held on May 16 at the Gorton Community Center. A self described cinema enthusiast, Block told the gathering of more than 400 people how he categorizes movies to help him decide which ones to see.

“I don’t just want to be another guy telling you what to see,” Block said. “There are waiting-in line movies like ‘The Force Awakens’ where you wait two days in line. It’s about the experience. ‘Part of the circle’ movies you see to know what everyone is talking about. They have lines like ‘make him an offer he can’t refuse.’” Other categories he described include “dragged by your feet” selections, and more.

After going through how he determines which movies to see, Block gave the example of his trip to the Music Box Theater in Chicago to watch “Lawrence of Arabia.” He said he was not sure about the classic as several scenes passed before him. Then he told the crowd what really worked for him.

“I smiled,” Block said, adding that feeling good about a movie was a primary factor.

Two of his schoolmates, Michelle Alonzi, a junior, and Peter Hill, a senior, have shared classes with Block said they were surprised to learn about his passion and depth of knowledge about movies.

“I’m in his English class and I had no idea he knew all this,” Alonzi said. “I knew he did a lot with Facebook but this was amazing.” 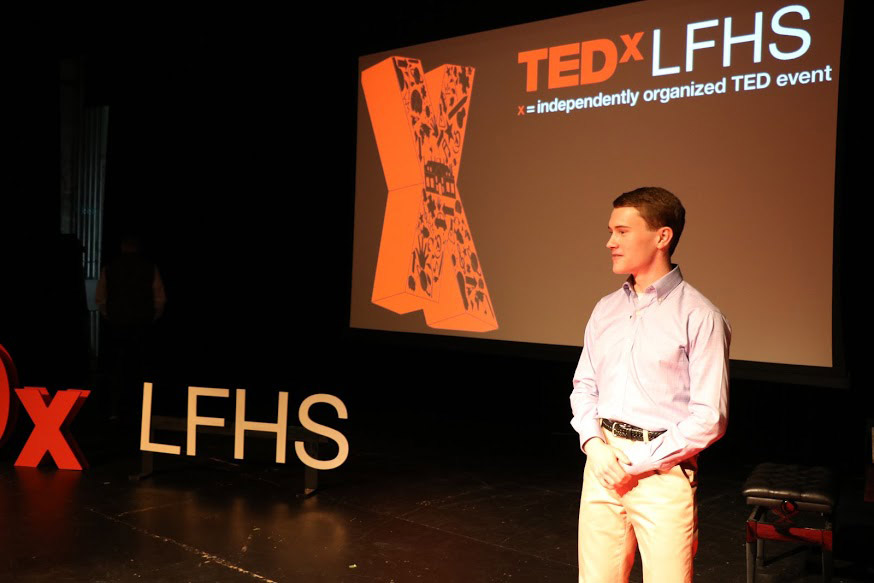 TEDxLFHS has grown from a smaller event at the school last year to a half-day production including presenters from community members from beyond the building’s walls. In addition to LFHS students, presenters included adults as well as students from Woodlands Academy and Lake Forest Country Day School.

“I’m really impressed the way this came together,” said Principal Chala Holland, who is in her first year at the school. “This is representative of the school and community.”

Another Lake Forest High School senior, John Fahrenbach, spoke of his passion about caring for the mentally disabled. Inspired by an uncle who was born with a medical condition that caused a brain injury, he said he thought about how many people needed care and how funds could be raised. Then he went to Lamb’s Farm with a teacher and he saw the human side in the bakery.

Another Lake Forest High School senior, John Fahrenbach, spoke of his passion about caring for the mentally disabled. Inspired by an uncle who was born with a medical condition that caused a brain injury, he said he thought about how many people needed care and how funds could be raised. He said his uncle was a special part of his family, and his feelings were reinforced when he went to Lamb’s Farm with a teacher.

“The person working (in the Lambs Farm bakery) smiled and talked to us,” Fahrenbach said. “She wanted to be our friend. She saw our humanity. How many times do you see that at work, school or on your street?”

Kimie Han is a Lake Forest High School freshman and a classical musician whose performance credits include the Chicago Symphony Orchestra and the Lake Forest Symphony. She spoke about the relationship of time to the enjoyment of what a person is doing.

“In school we are learning things– so many new things it seems slow,” Han said. “If I talk to you about (Dimitri) Shostakovich or (Sergei) Rachmaninoff, classical musicians it will be slow for you. It will be fast for me.”

Han then said life should be enjoyed at all moments. With that she went to a piano on stage and began to play Frederic Chopin’s “Black Key Etude.” The applause for her performance were some of the loudest of the afternoon. 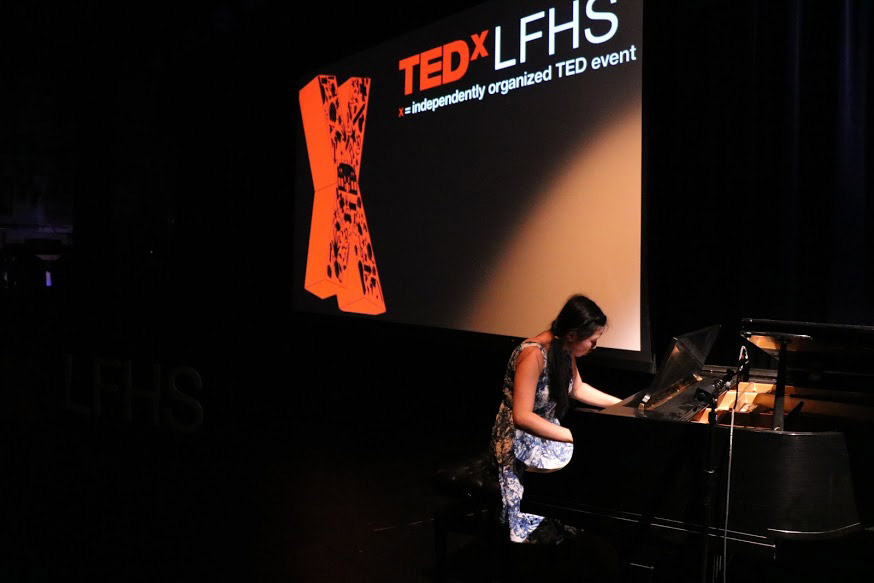 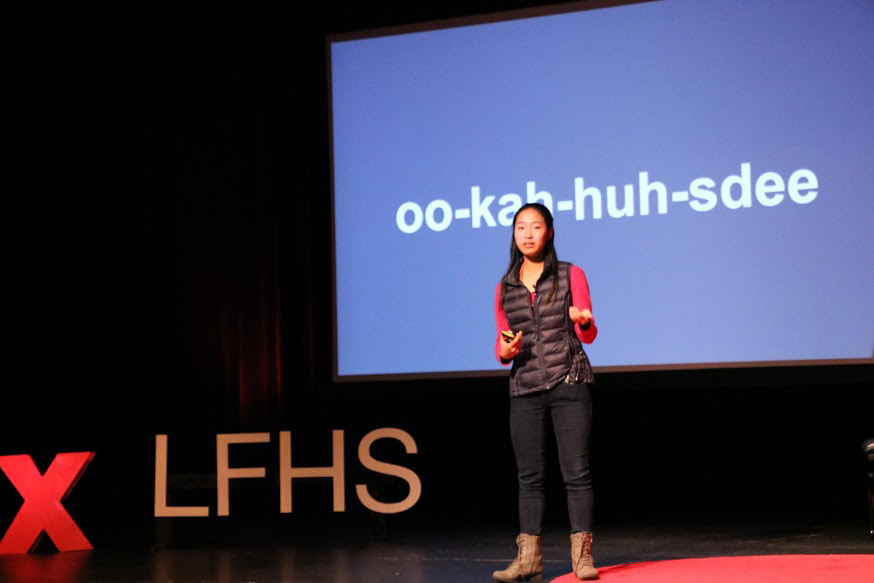 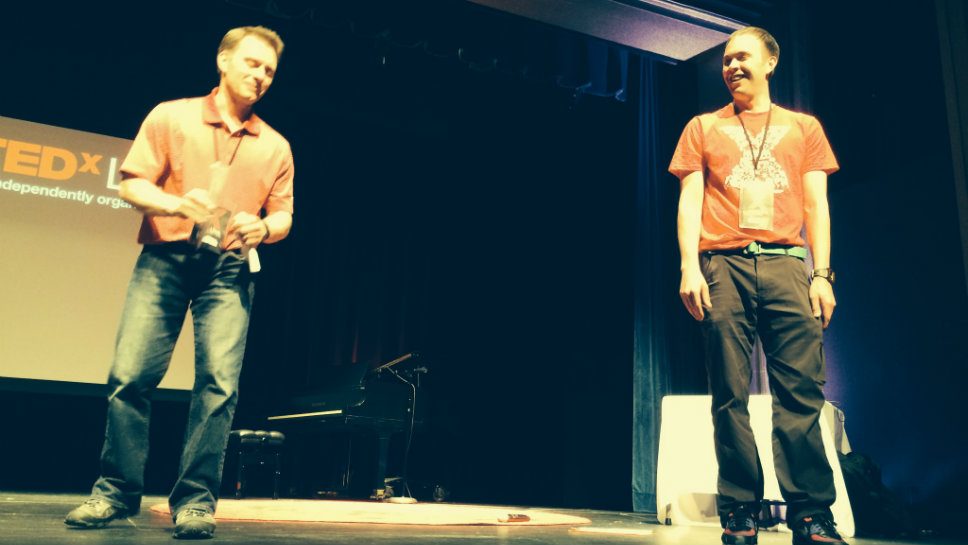 Jimmy Juliano (left), the creative director of TEDxLFHS challenges Joe DeRosa, a teacher and event organizer, to a paper airplane making and flying contest at the end of the first session.