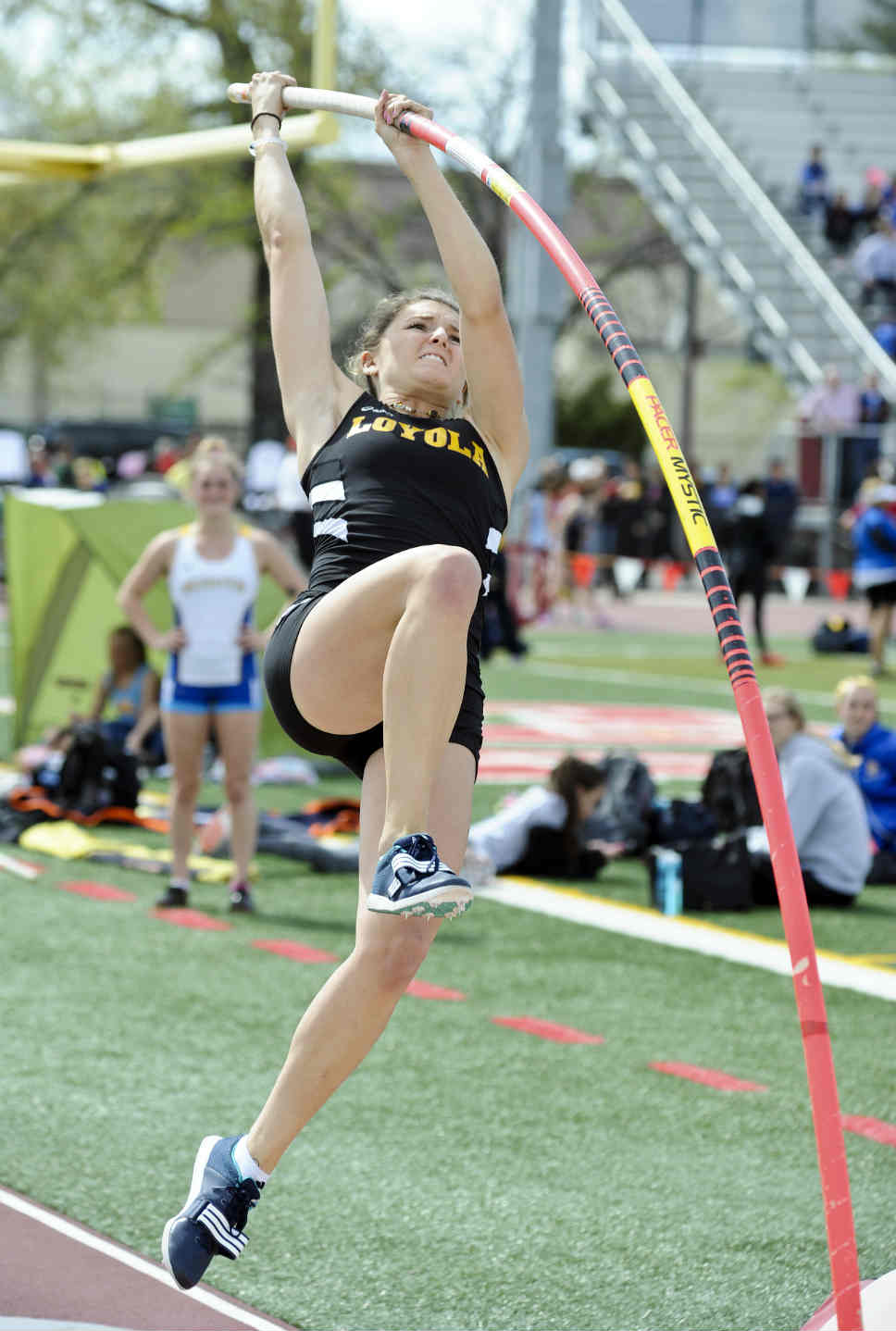 Lila Adler of the Ramblers bends the pole on her way to clearing a height at the Niles West Sectional. She placed first in the event. PHOTOGRAPHY BY GEORGE PFOERTNER

Watch Lila Adler at a competition. She’s the extrovert. The outgoing one. The life of the party.

She’s the mayor of Vaultville. The president of the Kappa Kappa Vaulta sorority.

She has a way of turning a meet into a happening.

Adler is the one fully engaged with coaches, teammates, fellow competitors and even sports writers.

Immediately after the Loyola Academy pole vaulter completed her catapults at the Class 3A Niles West Sectional on May 12, Adler was hit with three interview requests. Bang, bang, bang.

As last Thursday’s meet was unfolding — right smack in the middle of it — Adler was being Adler. Moments after Niles West’s Nicole Cho made the state-qualifying height (10-3), she rushed over to the landing mat and was the first person to congratulate her.

A show of sportsmanship? More than that.

“I was happy for her. Nicole is awesome. She’s got so much potential,” Adler notes. “As a pole vaulter, your competition is going against the bar. It’s you versus the bar.”

“We all cheer for each other. We go to camps together,” says Cho. “We’re competitive, but we all like each other. That’s what makes pole vaulting different from other sports.”

Along the way, Cho has come to respect Adler greatly.

“She’s an athlete,” says the Niles West junior. “But it’s her mindset that sets her apart. She’s always positive. She’s got the psychological aspect down.”

She also has the commitment part down pat.

“It’s her dedication,” says LA sophomore Julia McDermott, who finished in a tie for fifth in the sectional with a personal record (9-3). “I’ve always been inspired by her dedication. She makes me want to do better.”

She might be about the elevation, but Adler has come to the realization that pole vaulters are at their very best when they’re grounded.

The ascending Rambler, who is in only her second season of pole vaulting, doesn’t leave home, doesn’t go airborne without her trusted Lokai bracelet.

“I have to have it on,” Adler, her head tilted just slightly, says.

The authentic Adler could be a spokesperson for the company. Her product of choice is the clear Lokai: 24 clear beads, 1 white bead and 1 black bead.

Being balanced is the best way to deal with the peaks and valleys of this grueling sport.

Being good also helps. Her story, which includes an athletic scholarship to the University of California-Berkeley, is about as inspiring as a trip to the Adler Planetarium. A resident of Bucktown, she’s only a hop, skip and pole bend away from the world-class museum.

Adler also is closing the distance on doing something big — real big — at this weekend’s Class 3A state meet in Charleston. The highly personable Rambler, who finished in a tie for eighth at last year’s state meet (11-0) claimed the sectional title at Niles West on May 12 by making 11-0 with relative ease.

She’s looking up at the state favorite. Grayslake Central’s Katie Schroeder won a sectional title (12-3) at the Buffalo Grove Sectional on May 13.

Clearing 12 feet, three inches would be no leap of faith for Adler. It’s not necessarily rare air. In an indoor quad meet at Glenbrook South on Feb. 9, she solved 12-0. And, on April 1, against national competition at Stanford University, she went 11-6 ¼ (4th place).

But her season hasn’t been totally free and easy. A stress reaction on her spine had kept her off the runway. She returned to meet action on May 7 and took first place (10-6) in the GCAC Outdoor Championship.

Adler worked hard to get back.

“I wasn’t going to let the doctor say I was out for season,” she says.

Besides, she had to get back. Meets — especially at this time of year — are way too much fun and vital to miss.

Adler took a roundabout route to get to where she is today. She grew up playing soccer, volleyball and basketball. In fact, she was a varsity soccer player at LA during her freshman and sophomore years.

“I thought soccer was my sport,” she says.

Two years ago, she got, if you will, sidetracked following a short — and random — conversation with LA assistant track coach Ryan Gibbons.

“I told him that I’d like to try out for pole vault,” says Adler.

Soon after that little chit-chat, Adler went … all in.

She went up and over.

In the past two years, Adler sought out high-level coaching and learned how to do handstands.

She was terrible at first. “I couldn’t do ’em,” she says.

Searching the internet solved that problem. They’ve got “how-tos” for everything nowadays.

Think about it. “Doing a handstand is almost like doing a pole vault,” says Adler.

“Hers are perfect now,” says McDermott. “She can hold them for a while.”

Like most elite vaulters, Adler went the extra mile(s) to receive top-notch instruction. Besides receiving help from Gibbons, she trained with GetVertical Pole Vault in Milwaukee and Jump High Athletic Club in Plainfield.

Her instruction team will get only better in the years to come. The coaching staff at Cal-Berkeley jumped on the idea of bringing her into the fold.

“They recruited me on potential,” says Adler.

Go ahead, raise the bar. 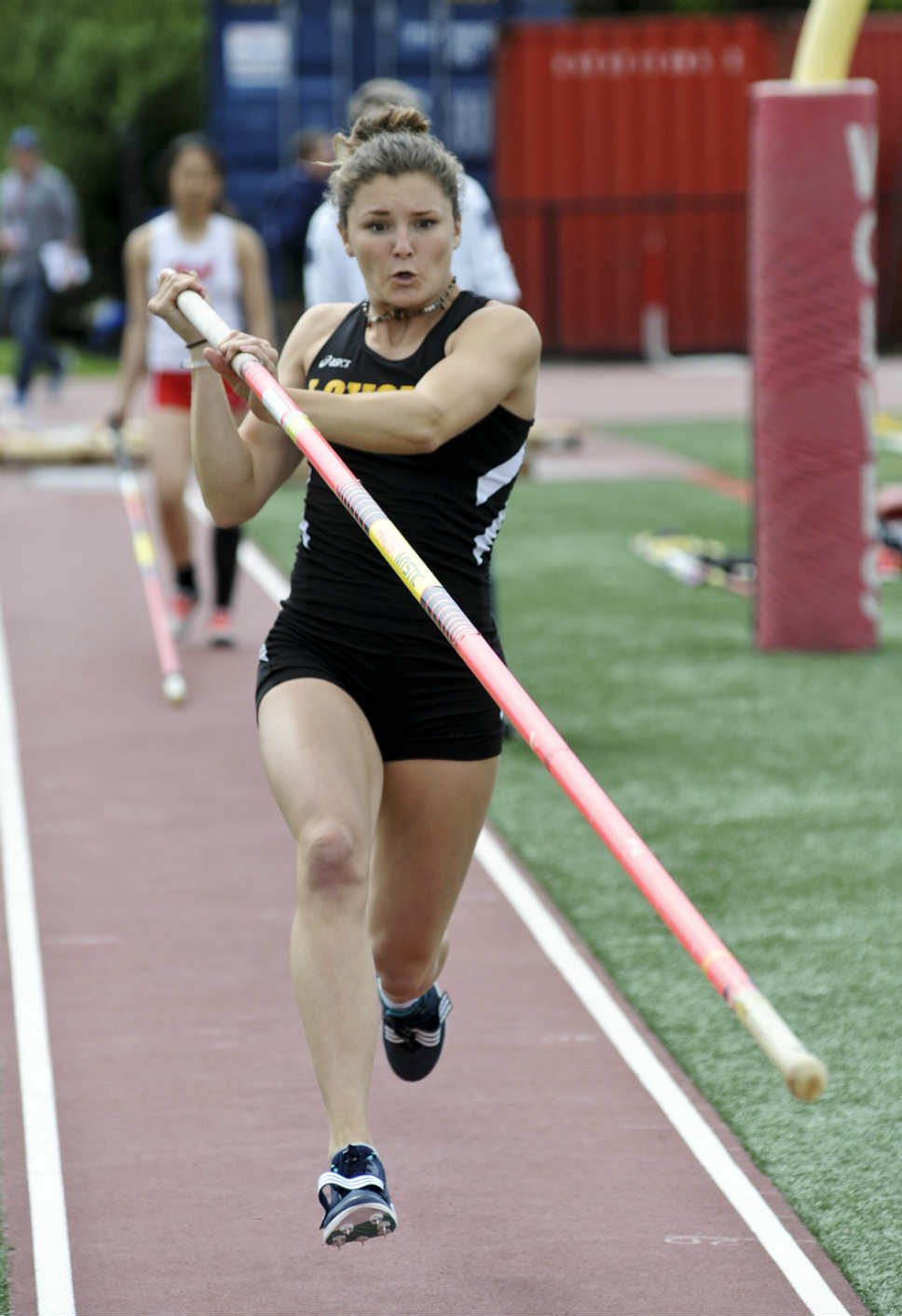