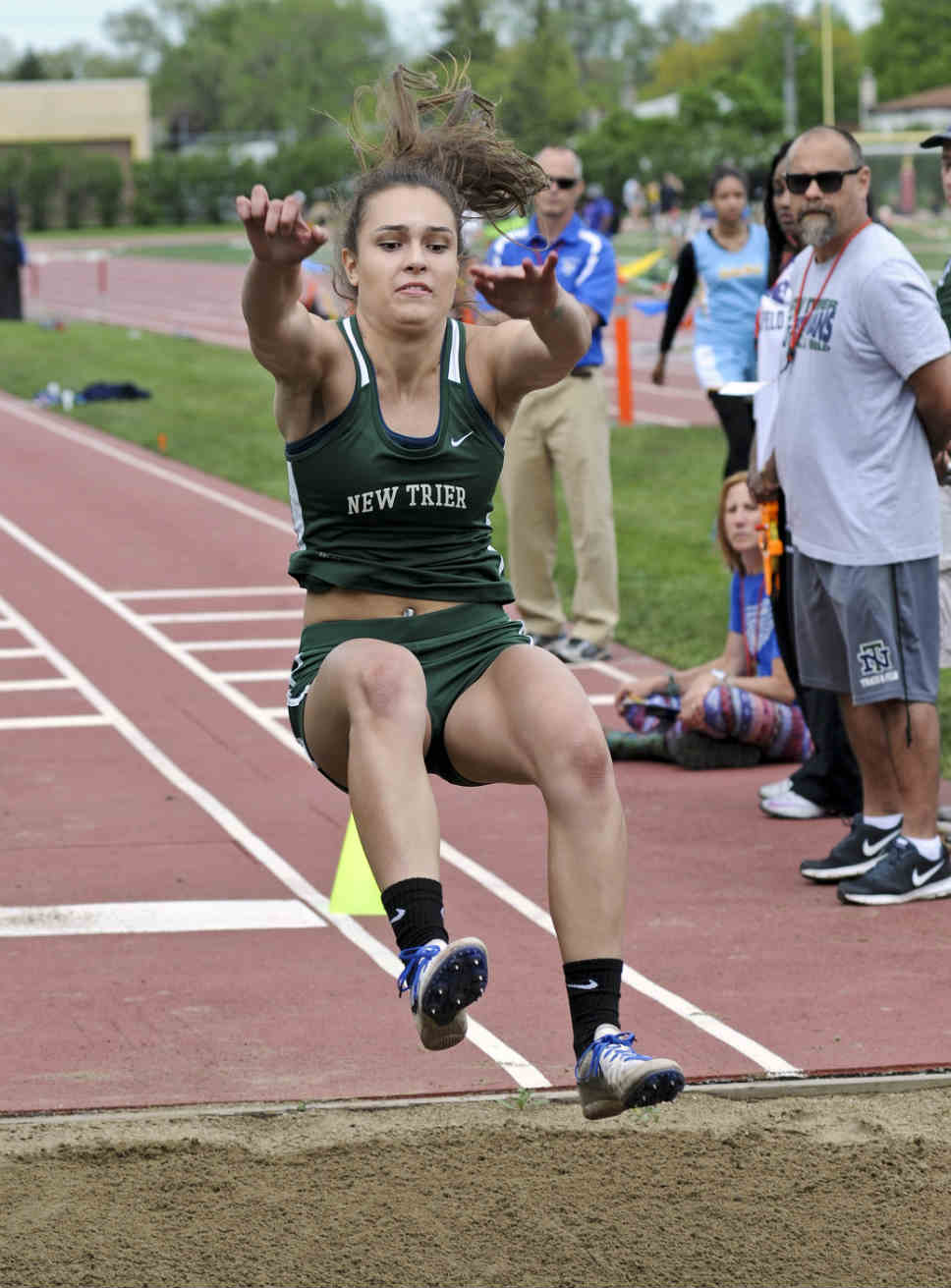 New Trier’s Alex Cook soars to a first-place showing in the long jump (18-2) at the Niles West Sectional. She also qualified to state in three relays. PHOTOGRAPHY BY GEORGE PFOERTNER

Alex Cook was a volleyball player at New Trier, a one-sport athlete, when she saw Mimi Smith run around and around and around the outdoor track on campus one day. The year was 2014, Cook’s junior year and Smith’s senior year. The Trevians’ varsity volleyball team was warming up outside before a practice.

Smith had won the Class 3A state cross country championship in 2013. The previous spring, as a sophomore, she had been a part of the 3A state championship 3200-meter relay team. Some accomplished athletes unpack their laurels and rest on them. Smith, clearly, had locked those up and asked somebody to hide the key in a country far, far away. Smith (NTHS, Class of 2015) now runs and trains hard at Wake Forest University. As a cross country runner. As a distance runner in track.

The voice belonged to Mimi Smith.

Good job. Two words, two syllables. Fuel. Cook qualified for the Class 3A state meet in the long jump and in three relays last spring. She repeated the 4-for-4 day at the Niles West Sectional on May 12, finishing first in the long jump (personal-best 18-2) and helping a trio of relays — 400, 800, 1600 — take gold. Her jump distance ranks seventh among state qualifiers, the 1600 relay (3:58.69) second. Cook served as the lead-off leg of the mile relay, followed by seniors Oona Jung-Beeman, Tara Smart and Johanna Glaaser. The quartet of Cook (leg No. 3), Glaaser, junior Kate Holly and senior Isabelle Robbins clocked a 1:44.1 — 11th fastest in the state — in the 800 relay. Cook (leg No. 3 again), Glaaser, Holly and freshman Emma Kirkpatrick combined for a first-place 49.12 in the 400 relay. An AC was scorching hot in Skokie.

The state meet runs from May 19-21 at O’Brien Stadium on the Eastern Illinois University campus in Charleston.

“Here’s all you need to know about Alex,” Trevians coach Bob Spagnoli says of the Middlebury College-bound trackster. “She’s in her second year of track, and she’s a captain. That says a lot. If we had 30 of her, I’d be able to sit back and enjoy an iced tea. She’s a tremendous student, a tremendous athlete. She’s got it all. She’s a tough competitor, but she’s a gentle leader. She’s a big sister to our young athletes, dedicated to the team.”

Cook’s result in the long jump (18-2) at last week’s sectional got people talking, got jaws to descend. It came on her first try. It allowed her to rest up for her relay duties. Cook’s previous personal-best in the event was 17-10 ¼, set at the New Trier Invitational on April 30.

“Alex is a tremendous competitor,” Trevians jumps/sprints coach Jamie Klotz says. “She attacks the board fearlessly, aggressively. She’s looking really good. When you get to work with an athlete who listens, who makes adjustments, it’s a big deal. Alex Cook is a big deal.”

Cook had been a Wildcat Juniors Volleyball Club member for a couple of years when she opted to run and jump for medals in the spring. Her new sport and its time commitment meant she would have to join a different volleyball club. She became a member of Energy, based in Niles. The setter then helped the Trevians reach a Class 4A sectional volleyball final last fall.

“A great addition to our track program,” Jung-Beeman says. “Determined, definitely determined, in all of her events.”

It’s a compelling and moving story, Cook’s. Teen arrives late to the scene of a sport. Teen falls for the sport, excels in it, plans to compete in it at college. Bess likes to remind her daughter every now and then that her words nudged the daughter into a rewarding venture. Alex Cook has no idea what her major will be at Middlebury College in Vermont. She enjoys Latin and writing. She enjoys being a member of one of the fastest sprinting corps in program history.

“I’ve met so many role models at New Trier, so many inspirational people,” Cook says, no doubt still thinking about Mimi Smith.

Count Alex Cook as an active member in both populations.