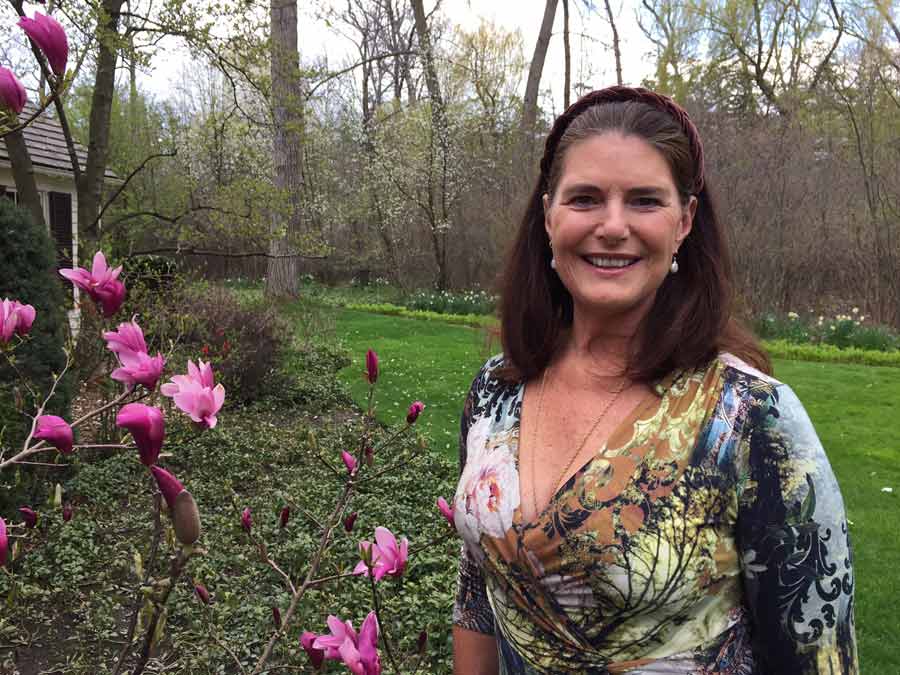 Anne Bent, founder of Porchlight Counseling Services in Evanston, in the backyard of her Lake Bluff home. Photo by Adrienne Fawcett

Several years ago Anne Bent was packing for a trip abroad when she received a message from above. That she was hearing from God was no surprise – an active Episcopalian at The Church of the Holy Spirit and a certified lay chaplain at Northwestern Lake Forest Hospital, Bent had always been a spiritually minded, prayerful person. Over the years she had asked God for many things: strength, forgiveness, to have the skills to really listen.

But the message she received that day as she stood with an armful of neatly folded clothing in her dressing room was so specific:

“Start a treatment center for students who have been sexually assaulted.”

“I didn’t ask why; I said OK,” said Bent, who grew up in Winnetka and lives in Lake Bluff. “I took it very literally as marching orders. I had asked to be used as a vehicle of the Holy Spirit, and I was going to do what I had been told to do.”

The only question then was how was she going to help this underserved market? After returning from her vacation, she got to work. A therapist friend put her in touch with a researcher and they attended national conferences, read books and periodicals and conducted a feasibility study to learn what college sexual assault survivors need most. Bent put together a board of directors and applied for and received 501(c)3 status as a non-profit organization. She hired therapists, and within  a few months, Porchlight Counseling Services was providing off-campus advocacy and therapy to victims of campus sexual assault – at no cost to the victims.

Porchlight now has nine therapists located throughout the Chicago area who work for one-third the market’s hourly rate to provide up to 25 sessions of therapy to students who were sexually assaulted during their college years, as well as to adults who were assaulted while they were in college or graduate school. Porchlight treats men as well as women, though Bent said most of the clients are women.

“Right now we are being inundated with requests and have never been this busy,” said Bent.

Campus sexual assault was a taboo subject when Bent started in 2004. Then, studies indicated one of every 10 female students was sexually assaulted in college; today it’s one in four, and most are never reported, according to the U.S. Bureau of Justice Statistics.

Discussing rape is still taboo, but things are changing, Bent said, because of several events that have taken place in the past 18 months. These include:

Bent also attributes the increased awareness and discussion of campus rape to student activists such as Sophie Karasek, co-founder of End Rape on Campus, who was a featured presenter at Porchlight’s fundraising event last November. And Emma Sulkowicz, who carried a mattress around campus when she was a senior at Columbia University in 2014  to illustrate the emotional weight of being raped at school.

Bent said sexual assault incidences overall increase in the spring during graduation, prom and the start of the summer season. But on college campuses the biggest spike in assaults occurs in August and September.

“It is often the junior boys, the upperclassmen, who go after the freshman girls and August and September are the big hunting season,” she said. “They systematically go after and target young women: they spike their drinks, get them off by themselves and into a bedroom where they do what they want with them.”

As awareness of college sexual assault grows, so do the numbers of people seeking therapy, and Porchlight has a waiting list (the therapists often take on additional clients or refer them to trusted colleagues).

Bent still hopes – and prays — that one day she’ll raise enough money to expand to other college cities and towns.

“One very important common denominator that we’ve seen with hundreds of women we’ve taken care of is that they are traumatized by their schools. They’re told to prove they said no but he continued,” said Bent. “Six months later they can’t sleep, they have PTSD, they’re not attending classes or they’re dropping out. Some are cutting, some are suicidal.”