HIGHLAND PARK – Sixth grade students at Elm Place Middle School have been learning about food insecurity in their own community as they prepare to address Hunger In Highland Park during Project Citizen on Friday, May 6.

Project Citizen is a nationwide program where students identify a local problem, research it, develop a public policy, and create a plan of action.

Sixth graders Amanda Green and Jack Weinberg explained that each student in their grade is responsible for gathering 100 notes or facts about hunger. The notes will be compiled into essays, which will be presented to the panel, and students will continue to speak throughout all nine periods.

“The hardest part was finding the right and relevant notes to make up 100,” said Jack.

The research is divided among different groups. “Jack and I are working on malnourishment and another group is working on history of hunger in the U.S.,” said Amanda.

Jack added that he was surprised to learn that many local families don’t have access to the “right food and the healthiest.”

They’ve both been in contact with Top Box Foods, a food pantry in Lake Bluff that was founded by Christopher Kennedy, son of the late Robert Kennedy. Amanda said Top Box Foods has healthy food for everyone.

The sixth grade class donated a collection to the pantry.

Elm Place Principal Heather Schumacher said the students became knowledgeable and articulate about the project.She explained that the sixth grade has been working hard for over a month and a half with the help of Dr. Mark Nolan Hill and social studies teacher BryanWagner.

“It’s a student-driven topic about having healthier food over quantity of food,” said Shumacher. The school also hosts an annual Day of Giving where over 150 families have received food, clothing, books and toys in Highland Park, Highwood and Fort Sheridan.

Amanda and Jack described what they liked most about Project Citizen:

“Being able to reflect and make a difference in the community,” said Amanda. “It’s not the adults making the difference it’s us. I’ve been eating more organics, and we share healthy fruits and vegetables with the class.”

Jack said his favorite part was what he learned from the research. He and Amanda added that they also learned a lot from their social studies teacher (Mr. Wagner), as well as helpful tips from moderator Dr. Hill.

Dr. Hill said he came in thinking Highland Park didn’t have problems like this, but learned otherwise. When he spoke to the class he realized that some of the students were not receiving adequate nutrition.

“To think that a child in school would be hungry tore my heart apart,” he said. “The sensitivity of the students was as if they were twice their age. I was in awe of their sophistication at the sixth grade level.”

The students will present solutions to prevent waste, as so much food is thrown away. “There’s a balance between too much and too little, and to think that these students are contemplating a subject of this magnitude,” said Dr. Hill. “I told the sixth graders how remarkable they are and how they’re solving problems that adults haven’t thought of.”

On Friday, May 6, the sixth grade class will speak before the entire school, members of the community and a panel in Elm Place Auditorium. The panelists will include Mayor Nancy Rotering, Councilman Alyssa Knobel, District 112 Superintendent Dr Michael Bregy, Chief of Police Paul Shafer and psychologist Dr. Richard Markin. Dr. Hill added that there will also be a seat available for Kennedy.

On the following Monday, May 9, Dr. Hill will take a dozen Project Citizen students to present to the mayor and City Council at 7:30 p.m. at City Hall, where they’ll receive a proclamation.

“I guarantee when (the students) present to the mayor and City Council their eyes will be widened,” he said. “Public awareness of the problem is one of the most important things.”

Dr. Hill became involved with Project Citizen 15 years ago after his daughter Linden volunteered his services when she was a student at Elm Place, but this issue really strikes a chord.

“Even though we had bullying as a subject, this particularly gets to me as a physician,” he said. “This compared to all of the issues in the past 15 years is one of the most significant and most sensitive because it deals with how people in the community help each other.”

When Dr. Hill first met with the students he asked if they thought they were too young to address this problem and they all said “no.”

“I walked away thinking our world is going to be in good shape with people like this,” he said.  “This shows me that this generation is acting like the “We” generation instead of the “Me” generation.” 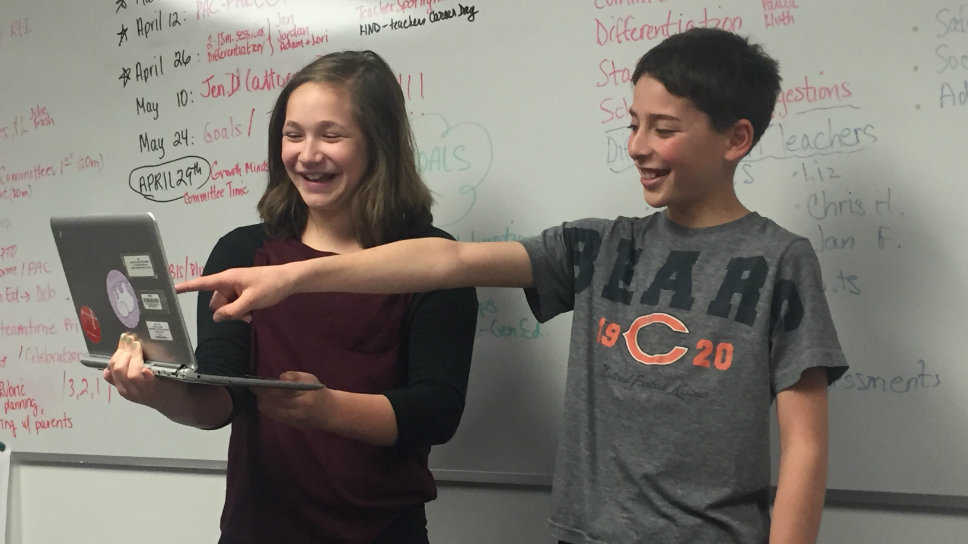