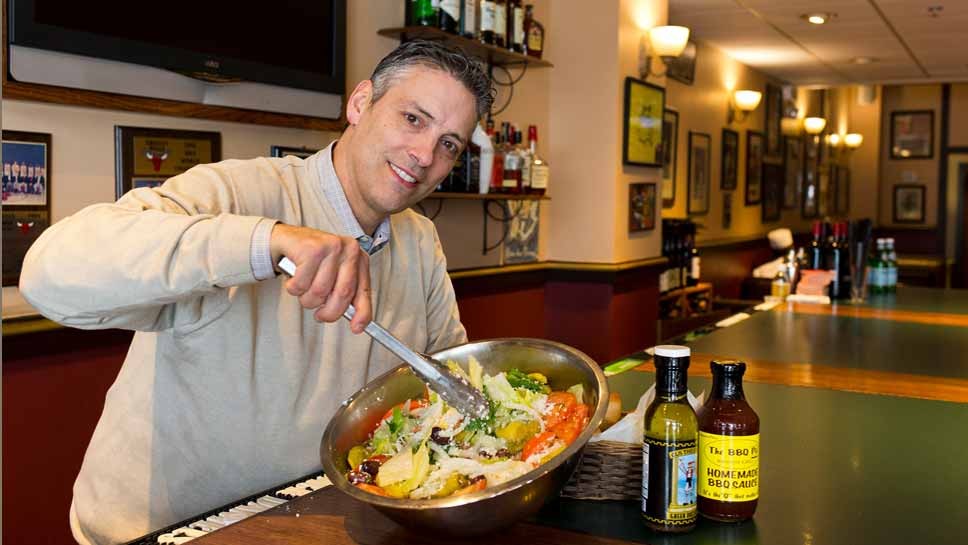 HIGHLAND PARK – Though Gus Karigan doesn’t live in Highland Park, mostly everything that he is grateful for is within 100 feet of his restaurant, The BBQ Pit.

“This business brought me my wife, my gorgeous children, and I get to work with my mother,” he said. “I’ve met so many people and it’s helped me cultivate a new business as well.”

To whet your appetite before we get into the meat of the story: years ago Karigan’s neighbor in Prospect Heights wanted to fix him up with “the perfect girl” next door. The timing was right and he agreed to go on a blind date with her.

On the day before their date he noticed a “gorgeous girl” in the window at Love’s Yogurt while he was pulling into the parking lot in front of the restaurant. As fate would have it, she turned out to be the girl he was scheduled to have a blind date with, who literally worked in the beauty salon next to the BBQ Pit at the Shops of Elm Place. The couple will be celebrating their 15th wedding anniversary in September.

In addition to serving a menu specializing in barbecue ribs, chicken, brisket, meat loaf, and Greek salad, Karigan works as a realtor for @properties on Central Avenue, which is a short walk from The BBQ Pit.

How does Karigan manage to juggle two jobs, and still find time for his family?

“In owning your own business you have to be able to do 20 things at one time, so it’s worked out,” he said. “I’ve been good at jumping into the kitchen when an employee doesn’t show up for work, washing dishes, or doing whatever it takes.”

Karigan learned from watching his dad, Frank, who came from a long line of restaurateurs. Born in Dubuque, Iowa, the family moved to Chicago in 1968 when his dad opened a couple of Little Red Hen fried chicken fast food restaurants. The last one he owned was in Glencoe until 1978.

“We enjoyed the North Shore and wanted to stay in the vicinity, because he developed a good customer base,” said Karigan. “In 1978 Dad found a restaurant that had closed down in Highland Park. We took that business over and it became The BBQ Pit.” It was on First Street between McDonald’s and an old Porsche/Audi dealership, and his dad ran it for 10 years. Sadly, he passed away in 1988.

“I was just graduating college during all of this turmoil in our family,” said Karigan. “It wasn’t a matter of choice; I had to take over the family business for personal reasons. My two older brothers had families and were entrenched in their jobs. I was single and basically it had just fallen into my lap.”

Karigan’s mom has been with him from the very beginning. “My mother, who’s 82, still comes in here everyday and drives back and forth like the post office. For the most part it’s like we’ve become friends,” he said.

His brothers are also very involved in her life as well, but she lives by herself, and Karigan said if she needs something like the driveway shoveled or the grass cut, he’s only a mile away.

After staying at the First Street location for 10 years, in 1998 The BBQ Pit moved around the corner to 589 Elm Place at The Shops of Elm Place to provide greater visibility.

“The other unique thing is, if we’re not the oldest restaurant in Highland Park, we’re definitely in the conversation, said Karigan who noted that Country Kitchen on Central Avenue opened the same year.

He continued, “In 1978, I was 12-years-old, and now I’m 50. To me it speaks volumes that families have been coming here with their kids, and now those parents are grandparents. We’ve lasted through a couple different downturns in the economy, and the changing of generations.”

In 2008, Karigan decided to take out four booths to add a bar with a big screen TV in the front of the restaurant, and another television on the back wall. “The BBQ Pit has become a neighborhood hangout like Cheers,” he said. “You can have a cocktail and watch a game.” He also prides himself on knowing most everyone’s name. “I can recognize most people. I’m very strange that way.”

There are 40 items on the menu. Karigan said they can create so many different entrees from the same base items; chicken, ribs or steak “which are probably our big three.”  They also offer different types of fish.

“You have to take into account allergies, diets, and people aren’t eating as many carbs,” he said. “People used to order exactly what was on the menu, but nowadays you have to readjust your plating on the fly. Another change is that we used to have big bread baskets on the table, and now we go through half as much bread. Pop sales have gone down dramatically. That’s a big profit item for us. It’s like any other business, it’s challenging when you own your own place.”

The homemade barbecue sauce and his late paternal grandfather’s Greek Salad dressing are both gluten free. The latter is also available at Sunset Foods in Highland Park. 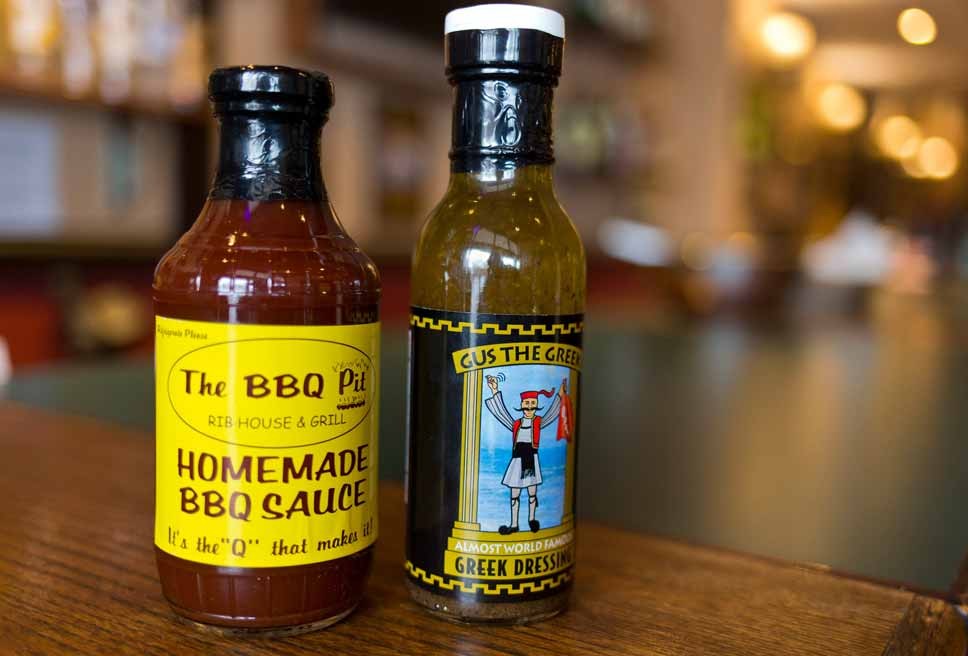 The BBQ Pit was one of the first restaurants in Highland Park to serve sweet potato fries. Karigan discovered them when he was at the Masters Tournament in Augusta, Georgia about 17 years ago.

“We went to a little shack between Atlanta and Augusta, and we got these unbelievable southern smoked ribs, chicken and sweet potato French fries. I said when I go back to Chicago I’m going to search for them,” he said. They continue to be a fan favorite.

Karigan’s employee turnover is very low. “I’ve had four of the same help here for 20 years. To me it says something that people are happy here. I think that they look forward to coming to work. I’m a very low key boss,” he added.

Karigan’s brothers, nieces and his 14-year-old son are always willing to help out in the family restaurant, and he hopes his 11-year-old daughter will also be involved one day.