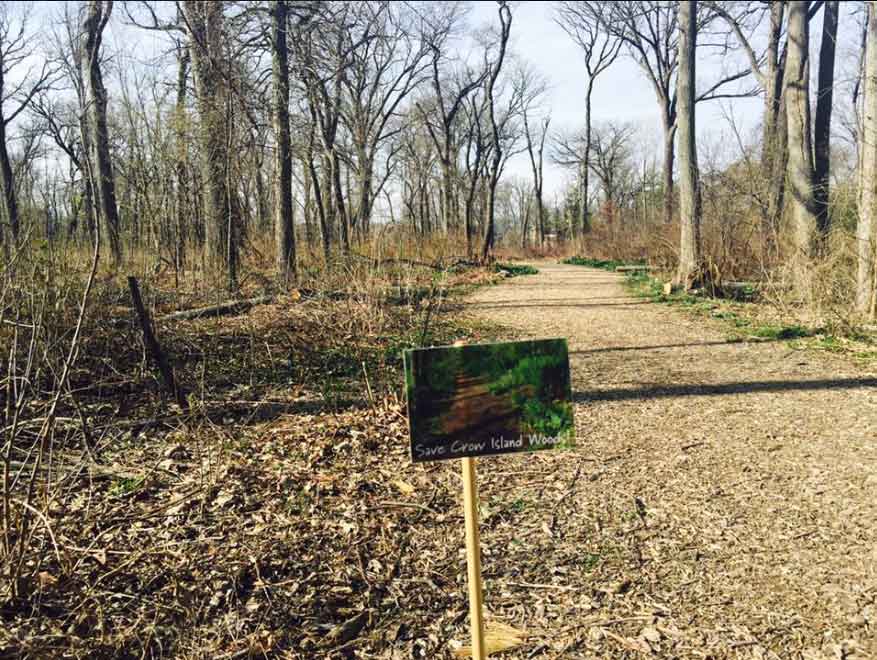 A “Save Crow Island Woods” sign at path in the woods. Photo from the group’s Facebook page.

WINNETKA – Stormwater is at the center of yet another controversy in Winnetka, but this time it involves Crow Island Woods. A group of residents has formed a grassroots organization called “Save Crow Island Woods” that aims to protect the park from potentially becoming a stormwater storage area.

The park is one piece of a stormwater management plan, proposed by consultants Strand Associates, who were hired by the village to solve the flooding issues that plague western and southwestern Winnetka. The proposal, which was presented by Strand at a community meeting on April 12, involves piping stormwater to a five-foot deep, above-ground standing pond located in Crow Island Woods.

While Strand’s lead consultant Michael Waldron said at the April 12 meeting that the intention was not to clear-cut Crow Island Woods, residents are concerned the plan could potentially harm the historic park.

The group has a petition, as well as a website and Facebook page — www.savecrowislandwoods.org and www.facebook.com/savecrowislandwoods/— and is comprised of a group of concerned residents who don’t want to see Crow Island Woods as part of the stormwater plan.

“While it does mitigate stormwater, we think it puts children in harms way, it robs Winnetka of a cherished and unique forest and concentrates pollutants near a historic school,” Franzen said.

Crone started the website after he learned about the plans for Crow Island from a friend. His goal was to raise awareness of the issue. He also went door-to-door in his neighborhood near Crow Island Woods, handing out postcards. When Franzen learned about the issue he got in touch with Crone, and they’ve since joined forces to organize against the consultant’s proposal.

The group’s website lists many reasons why they are against storing stormwater at Crow Island Woods. They’ve raised concerns about safety, such as the pollutants in the stormwater, a deep pool near an elementary school and a potential increase in mosquitos. The group is also worried the plan could damage Crow Island’s Oak Savvanas — which were once common in the midwest — and that it could displace animals that live in the park.

Save Crow Island Woods is circulating an online petition requesting that the village remove the park from the stormwater proposal. As of April 20 there are 198 signatures and 71 comments. Crone and Franzen also said they have had over 60 comments on the website, as well as over 50 people on their mailing list.

“People are commenting on the site and feel pretty passionate,” Crone said.

While both Franzen and Crone both said they’ve experience flooding problems in their homes near Crow Island Woods, they remain against including the park in the plan and would like the village to find other alternatives.

“The proposal is to cut down the heart of the forest,” Franzen said.