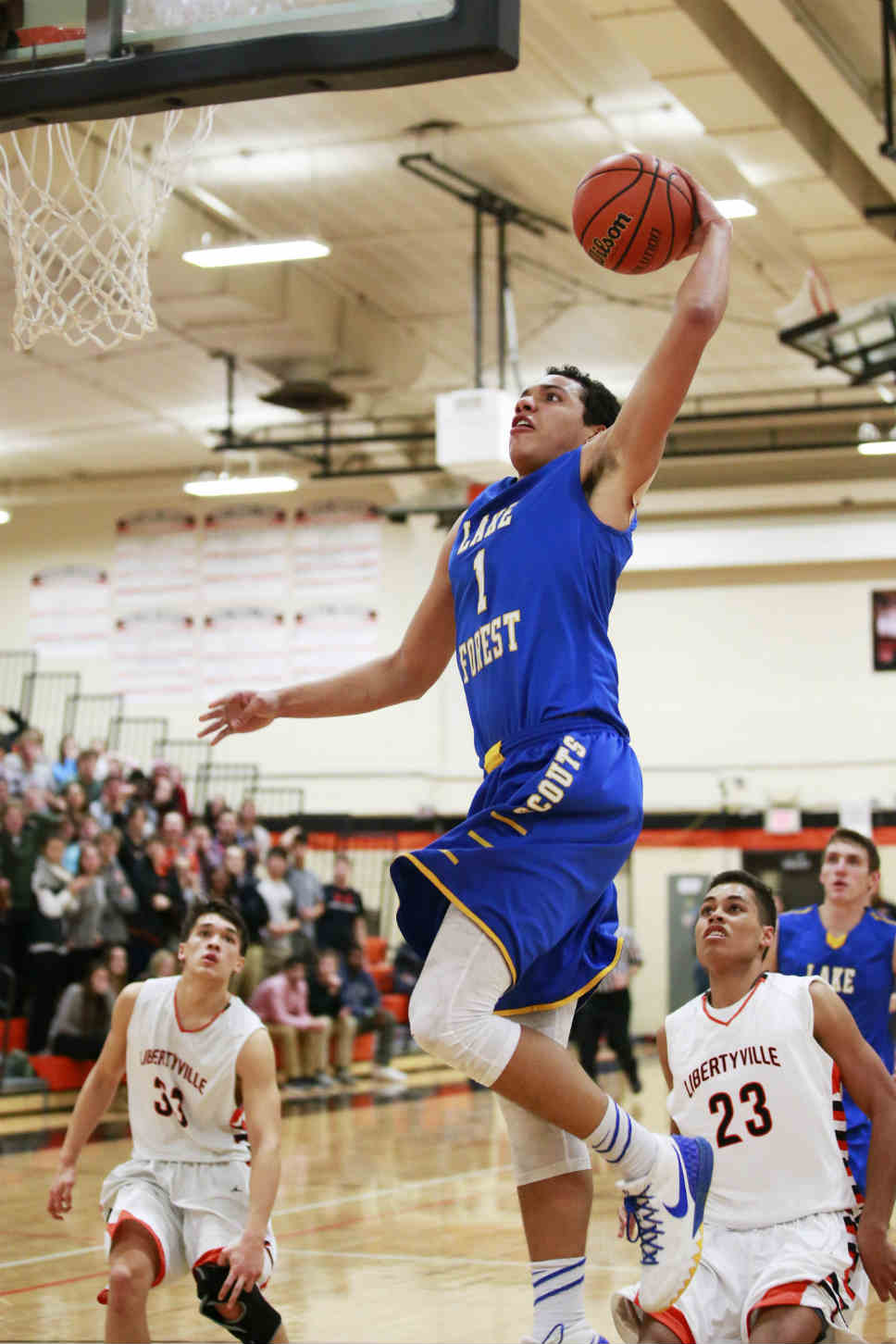 Lake Forest High School’s Lorenzo Edwards rises up for a dunk during a game against Libertyville this winter. PHOTOGRAPHY BY JOEL LERNER

Ethan Madura has seen Lorenzo Edwards dunk a basketball. He has watched Edwards, a 6-foot-7, 210-pound senior, interact and laugh with other teens in the commons area at Lake Forest High School.

Big man on the court, big man on campus.

“Lorenzo was huge for us [in the 2015-16 season],” Madura, a Scouts junior forward, says. “Everybody fed off his energy in games. Our offense, a lot of it, ran through him, and he made a lot of guys better players when he was on the court. Off the court, everybody loves being around him. He’s such a humble guy, really approachable. You see him, in between classes, he’s a normal guy, talking to everybody.”

The young man who has the right to swagger (19 points, 11.1 rebounds and 3.3 blocks per game this past winter) in the hallways at LFHS chooses instead to walk around the campus as if he were the 15th man on a 15-man team. ’Zo knows humility. ’Zo embodies self-effacement. The forward and son of former NBA guard Kevin Edwards tries to blend in at the school. Impossible, and not just because of his height. People — students and faculty and administrators and coaches and custodial staff members — are drawn to Edwards’ easy smile and easygoing ways.

“How humble he has been throughout his success … that’s what impresses me the most about Lorenzo, the person,” Scouts basketball coach Phil LaScala says.

Lorenzo, the basketball player? There is a lot to like. An inside presence and a role player for a 28-3 squad in his junior season, Edwards morphed seamlessly into an inside-outside, go-to Scout in his final prep season. Working tirelessly on his shooting and ball handling in the offseason had something to do with that. Playing AAU hoops for Harvey-based MeanStreets Basketball had something to do with that. He watered his game daily. Observers, college coaches among them, watched his game and his confidence grow daily. Edwards hit two three-pointers in his junior season; he hit 18, second most on the team, in his senior season, including the one (with three ticks left in regulation) that forced overtime in a double-OT defeat of Libertyville High School.

“My freshman year, I didn’t think I was good enough to even think about playing college basketball,” recalls Edwards, named a First Team Class 3A/4A all-stater by the Illinois Basketball Coaches Association. “Sophomore year … maybe. And then last year, when people wanted to know where I was hoping to play in college, all I wanted to think about was my team’s season.”

All he wanted to do as a young one was hit homers, not clutch shots on a basketball court. Baseball stirred him. Basketball was the sport his dad played for two seasons at DePaul University and for 11 seasons (career averages of 10.9 points and 2.7 assists) in the NBA. But near the end of his middle school years, Edwards, a lefty, began to prefer the fast pace of basketball. The pitcher/outfielder’s glove got benched. Hoops became front and center for the power forward, with his dad serving as his regular training partner. Days in the Edwards’ home last summer usually began at 5:30 a.m., when Lorenzo got out of his bed to get ready for drill sessions with his dad at LFHS.

“That wasn’t always fun, getting up that early, but once I arrived at the gym and started to move around, shoot some, I was fine,” says a smiling Lorenzo, whose sister (DePaul sophomore soccer midfielder Lucy Edwards) and brother (LFHS sophomore sprinter/jumper Landon Edwards) also excel in sports. “My dad can still shoot. He has helped me a lot. The best advice he gave me was, ‘Have a short memory in games.’ If something goes wrong, if I miss a shot, I now forget about it quickly, move on. I don’t let it carry over and bother me during the next possession.”

Edwards’ mother Jeannie, a lawyer, usually drove him from Lake Forest to Harvey for MeanStreets practices during the 2015 AAU season. ’Zo liked to get some Zs on those lengthy trips, but only if he did not have any homework. Mom sat in the bleachers and watched the practices. College basketball coaches sat in the bleachers at AAU games and pictured Lorenzo Edwards in a college basketball uniform. Edwards, the college basketball prospect and eventual two-time all-North Suburban Conference selection, had graduated from “maybe” to “definitely.”

Edwards flew to St. Joseph’s (Pennsylvania) University for an official visit on March 28, shortly after returning from his spring break trip to Mexico. St. Joe’s split two NCAA men’s basketball tournament games in March. On the flight home from Mexico he watched Villanova defeat Kansas in an Elite Eight game.

The journey Edwards had taken in the Scouts’ 2015-16 season (18-10 record, one-point regional final loss to Deerfield High School) thrilled spectators, young and old. It is still fresh. There was that season opener in late November, Edwards tallying 27 points and grabbing 23 rebounds against Glenbrook South. There was that home game in early January, against Warren Township High School’s Blue Devils, the victory in which Edwards scored his team’s first 13 points and 30 of the Scouts’ first 41 points. There was that late trey in that Libertyville game in late January. There was Edwards’ 35-point game (four three-pointers) in that one-point win over Prospect in February. Monster stats, from beginning to end, from Thanksgiving to March Madness. Indelible memories.

“In the Prospect game,” Madura recalls, “Lorenzo went up for an offensive rebound and then dunked on this 5-foot-11 guy, totally dunked it. I still don’t know what the 5-11 guy was thinking.”

Kevin Edwards, figuring his son would enjoy a well-deserved break from a commitment to basketball this spring, encouraged Lorenzo to consider going out for the Scouts’ varsity baseball team this spring. Lorenzo considered it. Lorenzo bounced the thought.

“I haven’t picked up a baseball in three years,” Lorenzo says.

The glove remains benched this spring.