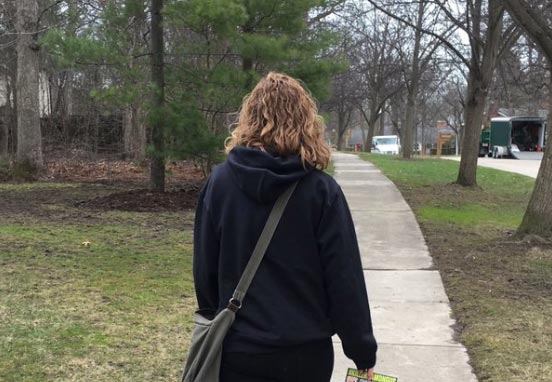 LAKE FOREST – Distribution of an anti-abortion leaflet designed to sever a local company’s business relationship with Planned Parenthood can resume after a decision by a Lake County Circuit Court Judge.

Judge Margaret Marcouiller denied a request by Stericycle Inc. and its President-CEO Charles Alutto of Lake Forest for a temporary restraining order preventing the distribution of the postcards on First Amendment grounds during a hearing April 11 in Waukegan.

An Ohio-based anti-abortion organization called Created Equal distributed the graphic material March 29 and 30 in Alutto’s neighborhood and other parts of Lake Forest as well as Lincolnshire as reported March 30 in the Daily North Shore. The leaflets include an image of what the group claims is a fetus aborted at 15 weeks of gestation.

Created Equal agreed to stop on April 1 after Stericycle and Alutto filed suit the day before seeking the temporary restraining order, an injunction against further activity, and financial compensation, according to an agreed order entered in court that day.

“It will start again,” Mark Harrington, Created Equal’s national director and a defendant in the litigation himself, said after the hearing. “We will continue to use the fliers. We’ll do it at a time of our choosing. We want to think about the next step in our plan.”

While Created Equal argued the fliers were protected speech under the First Amendment of the United States Constitution and the Illinois Constitution, Scott Lassar, one of the lawyers for Stericycle and Alutto, said they crossed the line and should not be distributed.

In addition to the graphic image, the postcard includes the words “Killers Among Us,” a photo of Alutto, and his home address and phone number.

“It’s inappropriate to put his picture and phone number there,” Lassar said. “There have been cases where doctors have been murdered and this is possible. This does not deserve First Amendment protection. It is designed to make Michael Alutto afraid.”

Peter Breen, the attorney representing Created Equal, said preventing the distribution of the material was a prior restraint of speech barred by the constitution because there was no proof of danger.

“This is about content,” Breen said. “It cannot be a prior restraint on speech. We are trying to get Mr. Alutto to change his mind.”

Marcouiller sided with the defendants. She said she saw no proof of anything untrue in the fliers and would not halt their distribution. She said speech cannot be limited without an overwhelmingly strong reason.

“This is not a substantial invasion or usurping of the enjoyment of real property,” Marcouiller said. “This would be an impermissible prior restraint on an issue of public debate. Even insulting and outrageous speech must be tolerated”

Though Marcouiller denied the temporary restraining order the claims by Stericycle and Alutto seeking financial compensation as a result of the activities of Created Equal and Harrington continue. Lawyers for both parties said they would be filing additional documents in court. They return to court June 2.

One of the services Stericycle offers its customers is disposal of regulated medical waste, according to Jennifer Koenig, the vice president of corporate communications. She said the company’s policy does not allow disposal of fetuses.

Dan Tierney, DeWine’s spokesperson, said in a March 30 DNS interview that an investigation into Planned Parenthood’s disposal of aborted fetuses found the organization put the material in containers, and that Stericycle took and disposed of the containers. Tierney said that when questioned, Stericycle representatives told the Attorney General’s Office the company was unaware there were any fetal parts in the containers from Planned Parenthood.

“Stericycle’s contracts with customers clearly states that fetuses should not be included with materials handled by Stericycle,” Koenig said in the email. “If a specific customer has indicated that it gave this to Stericycle, it has done so in violation of our contract.”

Lassar, a former United States Attorney for the Northern District of Illinois, said he had no comment after the hearing.