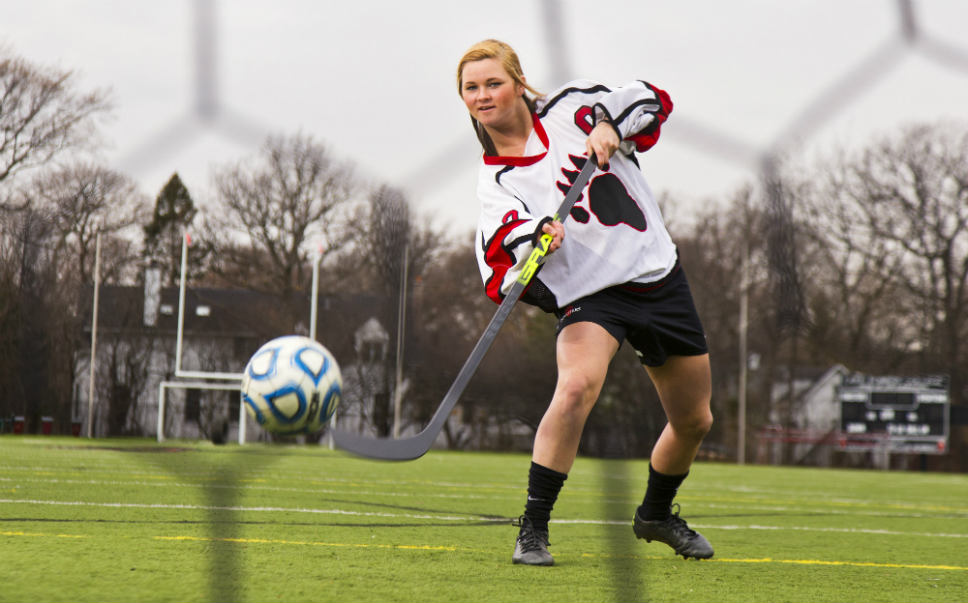 It began as just another typical day in the athletic life of Michelle Greeneway. It was Nov. 1, 2015. The Lake Forest College senior forward scored a goal in the 88th minute of a soccer match on the home field. The sun rises in the east and sets in the west; Greeneway scores soccer goals in daylight.

Her athletic day did not end there. Greeneway also played in a home LFC hockey game, as a center. It takes about five minutes to walk from the Foresters’ soccer field to the Foresters’ ice rink. Greeneway ditched her soccer cleats, got into her skates and scored a goal early in the second period. Time elapsed, between the goal outside and the goal indoors: approximately 90 minutes.

A typical day in the athletic life of Michelle Greeneway had turned into an extraordinary day.

“I saw both goals,” LFC women’s soccer coach T.R. Bell says. “That day was special, crazy special. “Michelle, I call her ‘Mickey,’ is the ultimate competitor, a strong, intimidating force in both sports. We’ve arm-wrestled several times, her idea each time. Want to know how competitive she is? If we’re walking together, heading to some field, Mickey makes sure she is one step ahead of me every step of the way.”

Greeneway — her parents, Gary and Mary, call her “Shelly”; some of her teammates call her “Hulk” — scored 104 career soccer goals in 81 matches and 103 career hockey goals in 101 games. Prolific. Prolific. No other athlete, in any NCAA division, reached the century mark in both sports in 2015-16.

“Michelle wants to be the best player in a way you’d normally see from an athlete at the Division I level,” LFC women’s hockey coach Carisa Wahlig says of the 5-foot-8 native of Sheboygan, Wisconsin. “The desire she has, the drive, the confidence, her focus and her ability, a natural ability, to score … she’s a rare athlete.”

Greeneway grew up with a pair of older brothers and an older sister, all of them organized hockey players in their youth, and she attributes most of her competitive edge to the years she spent watching her siblings impact games. Kid sister sees big brother score three goals in a hockey game. Kid sister wants to score four goals in her next game.

“That helped me and motivated me, coming from a family of athletes,” Greeneway, a finance major, says. “And so did what my coaches [at LFC] told me after my freshman soccer and hockey seasons. Each pulled me aside and said, ‘You could do something special here by the time you graduate.’ ”

The words stoked her. Greeneway stuck around the LFC campus in between her freshman and sophomore years, working as a conference aide for Bell and lifting weights and running in her spare time. The following summer she worked out regularly with John Preston (LFC, ’15), a Foresters linebacker.

Greeneway kept scoring and scoring. And scoring some more. In each sport. The biggest soccer goal of her LFC career came against visiting St. Norbert (Wisconsin) College last fall, the Midwest Conference regular season championship at stake. LFC fell behind 4-2, with about 12 minutes left in the second half. LFC tied it. LFC then won it, 5-4, on a Greeneway goal — her fourth of the match. The biggest goal of her LFC hockey career came with three seconds left in the third period of a tie game with Concordia (Wisconsin) University in the Slaats Cup final. The win secured a Division III Elite Eight berth in 2015.

As Greeneway neared the 100-goal career milestone in hockey in the winter, LFC alumni started to pay close attention. After she reached it, clinching the Century Double in soccer/hockey, LFC alumni emailed her.

“That was special, reading the nice things they wrote,” says Greeneway, courted by several UW college coaches in her home state when she attended Sheboygan North High School. “They were pleased I was wearing a Lake Forest College jersey (No. 7 in both sports) and representing the college. That meant a lot to me. What I love most about the college is the family atmosphere here, the support system. I also enjoy spending time with my teammates, and the coaches here are great. All of them believe in academics first, always.”

Greeneway, a two-time All-American in hockey and a one-time All-American in soccer, was named NCAA Division III Women’s Hockey Player of the Year (Laura Hurd Award) after leading the nation in goals (33) and game-winning goals (eight) in 2015-16. She notched seven career hat tricks and scored two goals in a game 11 times in her final LFC hockey season.

“What Mickey accomplished here, in two sports, was insane, hard to fathom,” Bell says, adding Greeneway plans to explore professional hockey opportunities overseas after graduating in early May. “I won’t just miss her abilities in soccer. I’ll miss her. She’s a great kid, from a great family.”

Bell’s soccer program started a tradition last fall, awarding the same fireman’s helmet to the Most Valuable Forester after each match. Bell handed the helmet to Greeneway after that match against St. Norbert, Greeneway’s four-goal game. Easy choice. The right choice. Greeneway politely declined the helmet and handed it to LFC forward Mimi Vaintrub, a sophomore from Francis W. Parker School in Chicago.

Vaintrub, a key reserve player, hadn’t played in weeks, a torn ACL halting Vaintrub’s season after a handful of matches. But she continued to show up and support her teammates. Greeneway noticed the commitment.

“It hurt our team when Mimi got hurt,” Greeneway says. “She was an important player for us, usually the first off the bench. It upset her, not being able to play. It upset me, all of us. It felt right, giving her the helmet on that day. She deserved it.” 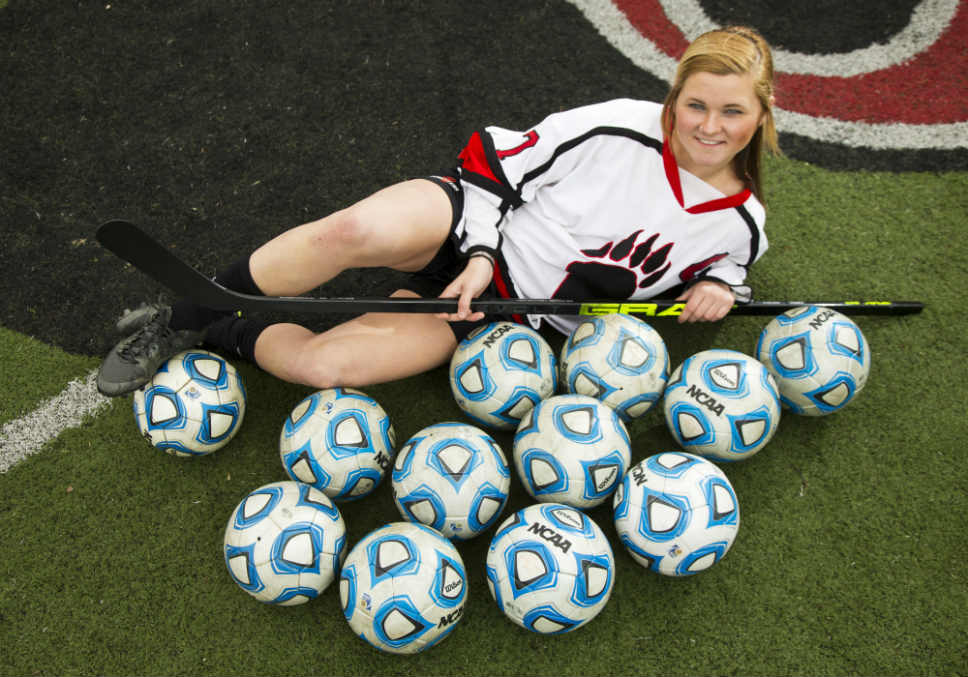