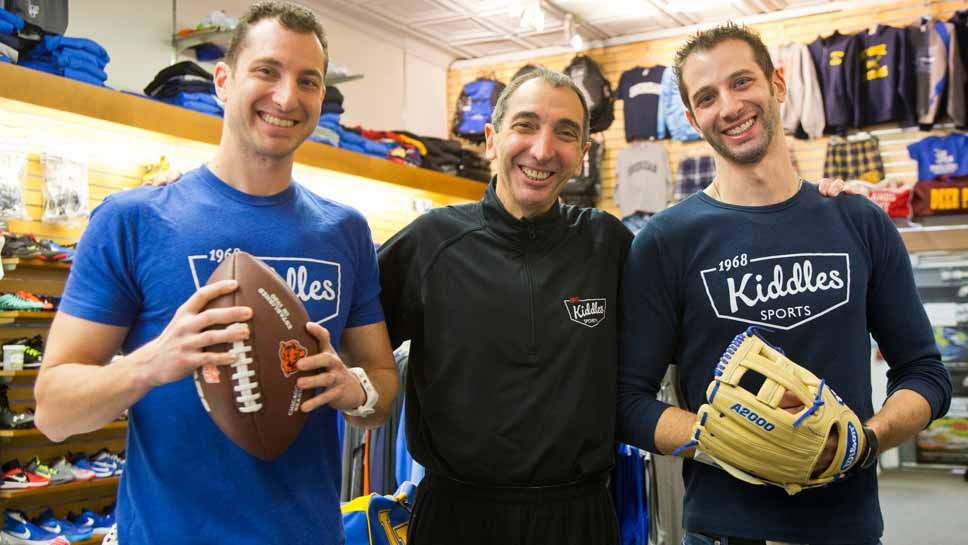 LAKE FOREST — With Helanders and other longtime businesses closing shop in downtown Lake Forest, Kiddles Sports has found a way to buck the big box and internet shopping trends.

Changing with the times has been a key ingredient along with teamwork, customer service and leaving work at the store at the end of the day. These have helped keep Kiddles afloat over four generations, the last three in the same family.

A Market Square fixture in the same location for more than 85 years, the business began as a hardware store by three Kiddle brothers — Joe, Stanley and Charles — and evolved into a sporting goods business under three generations of the Shlifka family since 1968.

Jay Shlifka of Highland Park, whose father Ron Shlifka purchased the store from the Kiddle brothers in 1968, said his father had a vision of moving Kiddles out of hardware and focusing on the Schwinn bicycles already sold at the store. There was already a second hardware store in Lake Forest.

“Schwinn, which was made in Chicago, were the quality bikes,” Jay Shlifka said. “They wanted to sell them in hardware stores because that’s where the men shopped. Schwinn felt cheap bikes were sold at toy stores.”

Jay Shlifka said the Kiddles started the store in the late 1920s.

Though Charles and Stanley Kiddle retired after selling the business, Jay Shlifka said Joe Kiddle offered to stick around and teach Ron Shlifka the bicycle business. Ron Shlifka had been a family grocer on the south side of Chicago before purchasing Kiddles. Joe Kiddle stayed there until 1975 when Jay Shlifka graduated from college and joined the business.

“I really never considered anything else,” said Jay Shlifka, who worked at the store as a child. “It was work but it didn’t seem like it then. I was spending time with my dad and my grandpa,” he added talking about his days in the south side food store and then Kiddles.

Ron Shlifka was adept at the bicycle business when Jay Shlifka got involved as an adult. Jay Shlifka said that is when a natural division of labor took place as they grew the store together. The transition to selling sporting goods was gradual as balls of all kinds, bats, gloves, football pads and more made their way into the merchandise mix.

“I developed the health and fitness business,” Jay Shlifka said. “It was becoming a way of life with people on the North Shore.”

Along with fitness, Jay Shlifka developed accounts with teams that went beyond Lake Forest High School and Lake Forest College. He said squads at Highland Park, Deerfield and Warren High Schools are outfitted by Kiddles as well as several Catholic and private schools. They special order spirit wear too.

As Kiddles went into the new millennium, three generations began running the store. Lee Shlifka of Deerfield, Jay Shlifka’s son, joined the firm in 2001 and his brother, Aric Shlifka of Northbrook, came aboard the following year. Three generations ran the shop until Ron Shlifka’s death in 2010.

“There are no egos,” Lee Shlifka said. “If we saw a way to do something better we would say it. Nobody got jealous. I don’t know how others do it but it worked for my family. We all do sales.”

“It’s all about open communication,” Aric Shlifka added. “The division of labor is all very natural. If we set goals and tried to meet them I don’t know if we could do any better.”

Lee Shlifka went into the family business after graduating from the University of Iowa while Aric Shlifka, who also went to Iowa, spent time with a marketing firm before doing that and more for Kiddles.

“I kissed my father hello when I got to the store and said goodbye at night,” Jay Shlifka said. “We didn’t discuss business away from here.” That remains a family rule.

Besides evolving to changes in the cultural and business climate of the North Shore, Jay Shlifka said taking care of the needs of people from Lake Forest and beyond has been a joy to him.

“It’s all about taking care of the customers,” Shlifka said. “These are people who keep coming back and there is nothing more important than maintaining their trust.”

“When you do what I do people recognize you when you are out,” Shlifka said. “When I see them in the store it makes me feel good to be able to help them. There is nothing more important than keeping their trust.”

During a Lake Forest City Council meeting last year Mayor Don Schoenheider reminded the people present there was no need to rely solely on Amazon.com for same day delivery. He said he got that kind of service from Kiddles when purchasing a bicycle for his daughter.

Part of being able to take care of the customers is getting to know them year after year, according to Lee Shlifka.

“When it’s spring and we see a kid come with his family, I might say ‘are you ready for this year’s uniform?’” Lee Shlifka said.