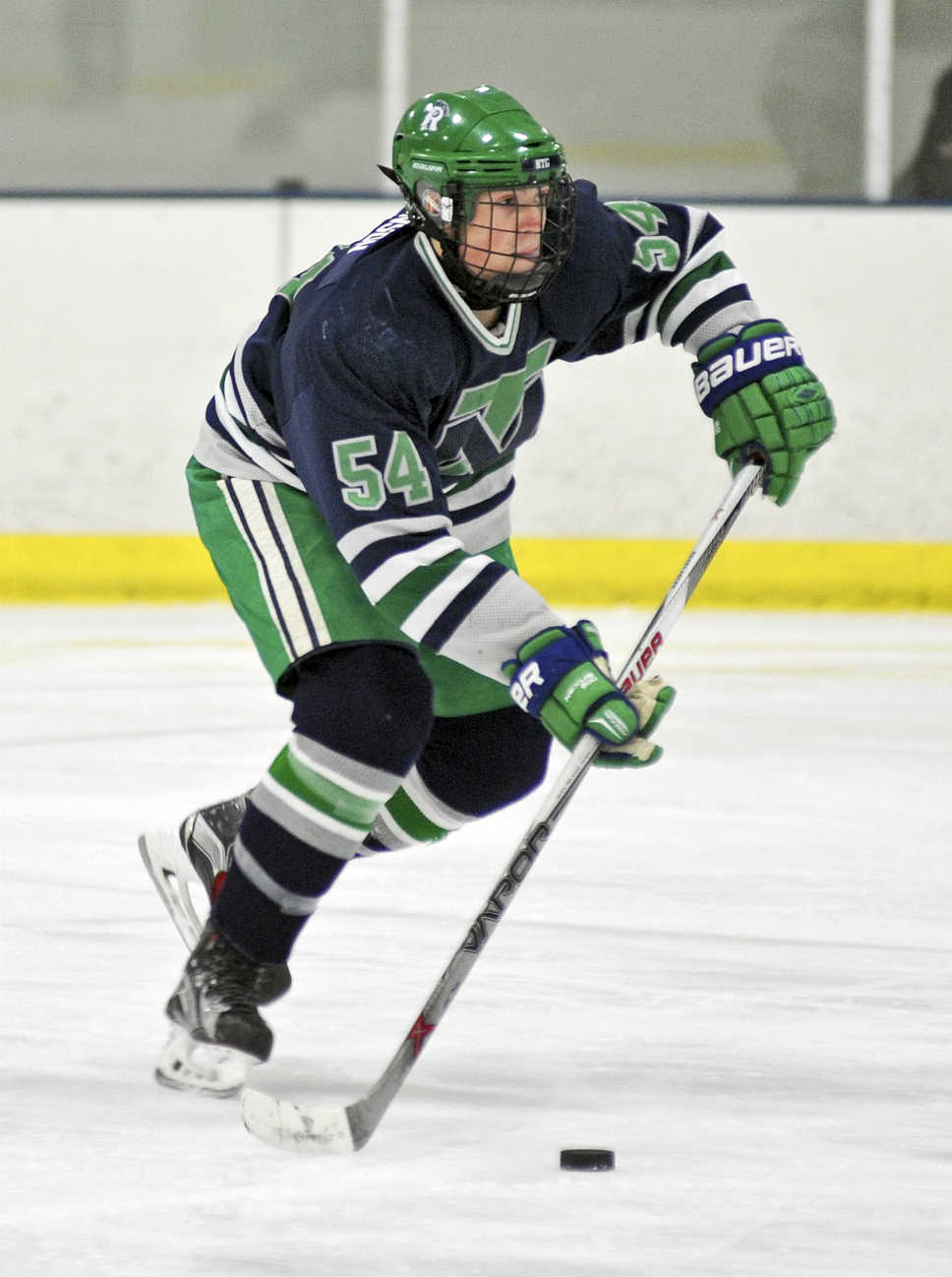 They practically suffocated Will Douthit, a New Trier Green hockey goaltender. NT Green had just edged Loyola Gold 2-1 in an AHAI state semifinal in Bensenville last month. Coming at Douthit, full bore, was an avalanche of hockey teammates. Their sticks and gloves had been discarded, their giddiness unleashed.

Green’s players then enveloped their victorious goalie and made him disappear under a hockey-clad dog pile at Edge Ice Arena on March 14.

New Trier Green senior defenseman Dillon Munson, meanwhile, skated away from the celebration and toward his team’s bench. Waiting and smiling was an assistant coach, in charge of Green’s defense. The player and the coach hugged until they lost circulation in their arms.

“He’s the one … the one who put me on the ice, taught me how to skate, coached me, drove me to most of my games, drove me to [American] Heartland Ice Arena [in Lincolnwood] early, really early, in mornings,” Dillon, a 6-foot-1, 180-pounder, says.

Four days later, in a considerably bigger arena, New Trier Green beat Providence Catholic 5-2 for the program’s third state championship in four years. Another dog pile. More take-your-breath-away hugs for a 54-10-1 crew. Among the throng of New Trier Green fans in the stands at United Center was Dillon’s brother, first-grader Cole, a goaltender, like Lenny was at Loyola Academy and at the University of Wisconsin-Stevens Point and for AAA and Junior A teams.

“My mom [Amy] and about 10 of my brother’s friends were there, too,” says Dillon, whose sister, Tay, skated as a junior defenseman for New Trier’s girls team in the winter. “That was great, having a lot of little guys up there cheering for us.”

“My dad,” Dillon says, “had lifted me in that photo. He is helping me glide.”

Dillon and a bunch of his friends and future New Trier Green teammates played for Coach Lenny Munson’s Wilmette Braves Mite 1 team more than a decade ago. They rose through the ranks on rinks, together. Little Dillon got bigger and better and gave forwards a whole lot to think about when they had the puck and wanted to advance it.

“Dillon played great defense for us all year,” New Trier Green senior captain and defenseman Stephan Bazianos says. “He was our enforcer, and he got faster, more mobile in the offseason, like we all did. Threw his body around. Dillon’s play was a necessity, a big reason we won the state title. In the state championship game, a kid went right at Dillon, full speed, hoping to put a big hit on him. Dillon, though, delivered the big hit and sat that kid down.

“That’s my favorite Dillon moment on the ice.”

Bob Melton has coached NT Green for 19 years, 11 of them state championship seasons. Most of his decorated squads ended up at the top of the boys hockey world in Illinois without the benefit of a tough, fearless, knock-you-to-tomorrow hitter on defense. A menacing defenseman in hockey is a cross between a ferocious linebacker in football and a thick shot blocker in basketball, all of them gladly serving as disruptive and game-changing forces. Munson, selected to represent Team Illinois at America’s Showcase in Pittsburgh later this month, embraced those roles for NT Green in 2015-16. Forwards and centers on other teams braced themselves in the vicinity of Munson in 2015-16.

“Historically, we haven’t had big, physical defensemen,” Melton says. “Dillon had a physical presence, probably his greatest attribute. He was big for us, a big hitter. We asked Dillon and Stephan to shut down the other team’s top line, and they did that often for us. The offensive part of Dillon’s game [five goals, 16 assists] … that improved. That helped us, too. His hands and his shot improved. His shot is a heavy one, like [Chicago Blackhawks defenseman] Brent Seabrook’s. Dillon’s heavy shot from the point aided our power play.”

Munson’s house became Munson Inn after the state championship game on March 18. Green’s players, post-dog pile at UC, piled into their team bus and headed to Wilmette. They entered the Munson abode between 10:30-11 p.m., famished. They inhaled pasta and salads and relived most of the delicious moments from the previous three hours.

Eight of the players, including Munson, joined their mothers for a spring break trip to the Bahamas a couple of days later.

“It was fun, relaxing,” Munson says of the vacation. “On our second day we found a great spot for a cheeseburger at a place called the Tiki Hut. We went snorkeling. Snorkeling is the coolest thing.”

Cooler than celebrating a state championship on the home ice of the Chicago Blackhawks? Not quite.

Munson will attend Miami University in Oxford, Ohio, intending to major in business, with a possible minor in … hockey. That “minor” part is partially true. Miami does not offer an academic program for puck heads. Miami does have a hockey club. It’s a good one. It won 26 of its first 33 games in 2015-16. Munson plans to show up — stick in hands, toughness in tow, state championship timber ingrained — for the club’s tryout sessions.

Lenny Munson won’t be there for those. Or maybe he will be. He will have some time on his goaltender’s hands. That state championship game last month was his last as a New Trier Green assistant coach. What a way to exit. What a way to cap a 14-year run.

But wait. Tay Munson has one more season of New Trier hockey.

“My dad, I have a feeling,” Dillon says, “will find his way to a spot behind a bench for one or two games next season.” 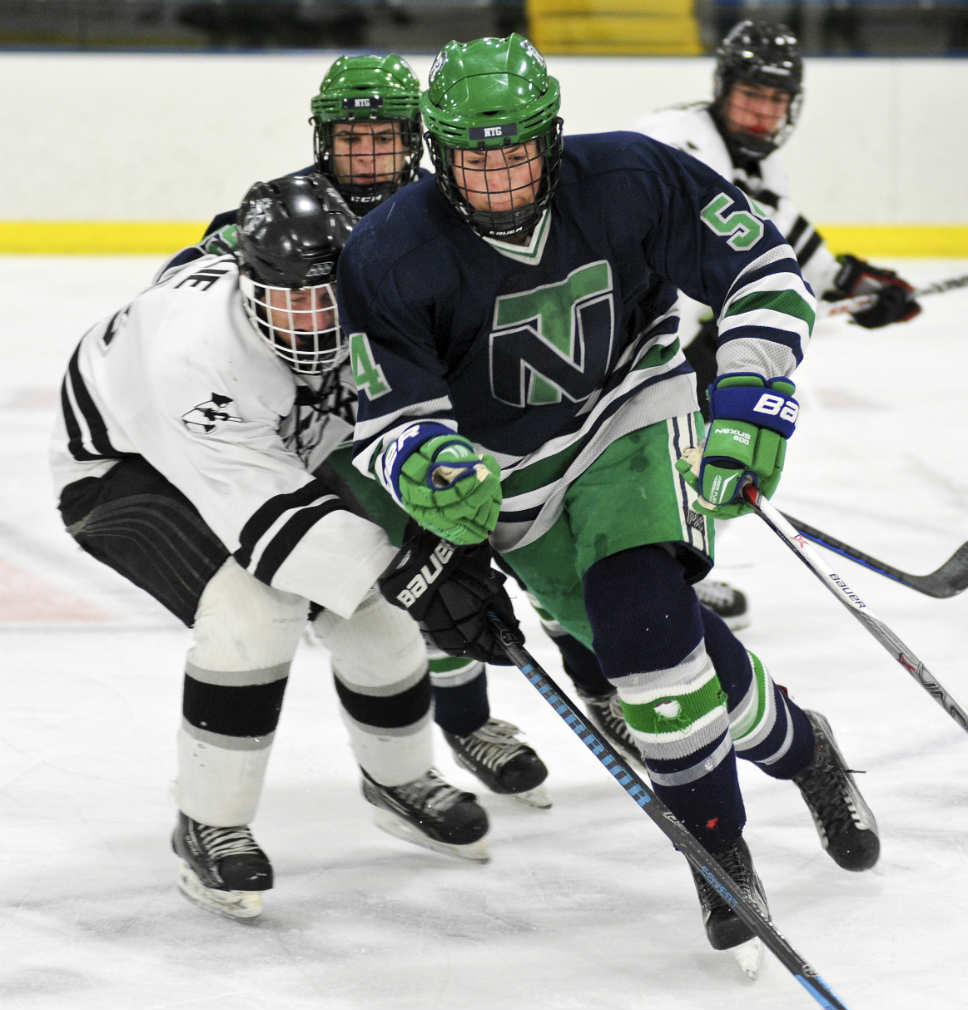