WINNETKA – Several lizards and snakes rescued from a home in Winnetka are doing well and could be ready for adoption in about a month.

“The severity of the neglect was the worst that we have seen,” said Ann Hughes-Wagner, a spokesman for Friends of Scales. Friends of Scales is a nonprofit dedicated to the care of ill and neglected reptiles.

The animals were discovered by a landlord after renters had moved out of the property. The landlord contacted Friends of Scales and delivered the animals to them. Hughes-Wagner said that it appears to have been a breeding operation gone horribly wrong. 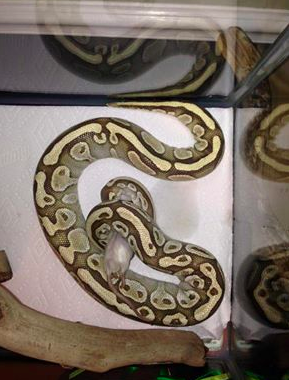 One of the recovering ball pythons in a Friends of Scales foster home.

She said the pythons were unique in terms of their coloring. “Someone had to invest a lot of money,” she said, adding that snakes like this could be sold for hundreds or even thousands of dollars.

The animals were delivered in their habitats. She said the reptiles were kept in what looked like large drawers.

She said it appeared that the animals had received little, if any, food or water recently. Friends of Scales are nursing the creatures back to health. The health issues were primarily malnutrition and dehydration. 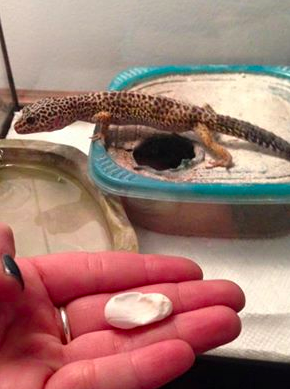 Although malnourished, this rescued Gecko still is producing eggs.

Hughes-Wagner said ball pythons are among “the best reptile pets” you could have. She said they are very docile and don’t get very large-about four feet. Although four feet sounds big, the snakes tend to remain curled up: “They can fit in the palm of your hand.”

Hughes-Wagner said the police were not involved in the matter–the property owner who found the animals did not call the police.

Friends of Scales takes in animals from throughout the Midwest, utilizing a system of foster homes. She said that the owners of reptiles should know that there is a support system available for the animals if they can no longer care for them.

Click here for more information about Friends of Scales.